A jealous boyfriend invented an online stalker to harass his partner in a ‘wicked’ ploy to ensure she was being faithful – leaving her so terrified she slept with a knife under her pillow, a judge has heard.

Rhodri Harries pretended to be another man and bombarded the woman with text messages, often of a crude sexual nature, to make her think she was being watched.

He was sentenced to 12 months imprisonment by a judge at Swansea Crown Court, but will serve half that behind bars before being released to serve the rest of the sentence behind bars.

His partner was so distressed by his actions she slept with a knife underneath her pillow – all while Harries pretended to support her, even threatening to ‘kill’ whoever was behind the messages.

Craig Jones, prosecuting, said Harries and his victim had known each other for more than a decade. They kept in touch over the years via Facebook before starting a relationship though they did not move in together. 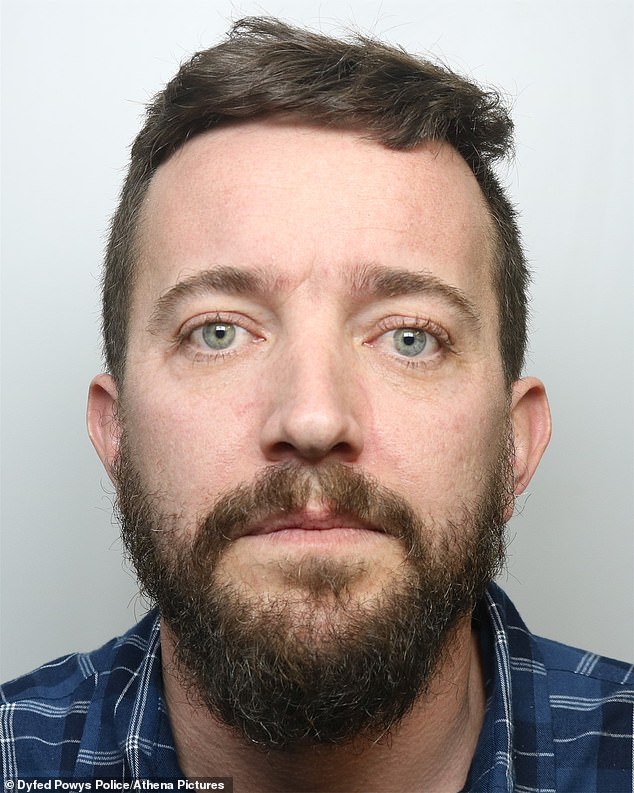 Rhodri Harries (pictured) pretended to be another man and bombarded the woman with text messages, often of a crude sexual nature, to make her think she was being watched

The prosecutor said Harries’ ‘obvious insecurity’ was apparent from early on and he would message her dozens of times a day and call her via FaceTime even when he was in work.

Mr Jones said if his partner did not answer his frequent calls the 35-year-old would become ‘sullen and sulky’ and would repeatedly accuse her of being unfaithful.

The court heard that in August 2019 the woman began to receive messages via Facebook from a profile in the name of Dean Thomas. The victim did not know anyone by that name and the court heard the messages quickly became sexual, ‘referring in crude terms to wild sex’.

The messages then began including personal details which made the woman believe she was being watched. Mr Jones said: ‘The messages were designed, and the prosecution say did, create the impression that she was being followed or stalked by an unknown male.’

The woman was so concerned she reported the matter to police and the messages ceased for a while. 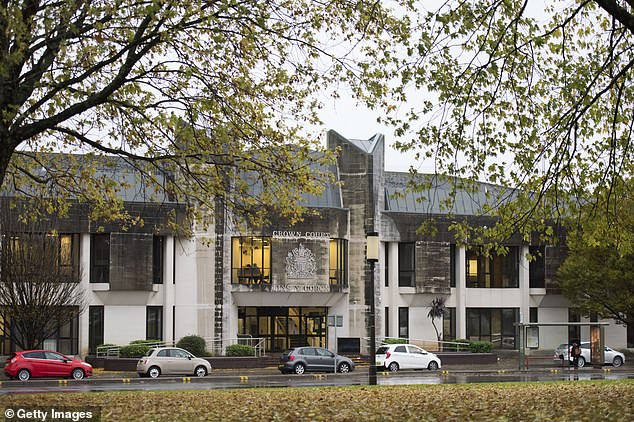 He was sentenced to 12 months imprisonment by a judge at Swansea Crown Court (pictured), but will serve half that behind bars

However, in February this year the victim began receiving scores of texts and calls from an unknown number begging her to resume a previous sexual relationship the pair had supposedly had and including references to details such as what cars had been parked outside her home on certain days.

As a result of the messages and the fear they created the woman rarely left her house and Harries began doing her shopping for her.

Mr Jones said the woman began to suspect who was behind the messages when one of them included a reference to something she had said to somebody else while her partner had been in the room. In fact he had misunderstood what his partner had said but it was enough to raise alarm bells.

The prosecutor said police then launched a ‘dogged and protracted investigation’ into the alleged stalking which included identifying Harries as the person buying top-up credits for the mobile phone used to send the messages and tracking the whereabouts of the phone using cell site analysis, which matched his known movements.

Mr Jones said in interview Harries denied being responsible for the messages – even coming up with the ‘preposterous suggestion’ that the phone movements could be explained by the fact the stalker with the mobile had been following him around as he travelled through Carmarthenshire and Pembrokeshire.

In an impact statement summarised for the court by the prosecutor the victim said she had been ‘completely destroyed’ by the defendant’s actions and been left unable to trust other people.

She said she had believed she was being stalked and began sleeping with a knife under her pillow.

Mr Jones said the woman had confided in Harries about her fears and repeatedly reassured him she had never met the person who was stalking her. The defendant played along and ‘kept telling her that he would be there for her and when he found out who the person was he would kill him’.

The court heard that when the truth emerged the woman felt ‘humiliated and embarrassed’ and had to tell her family what had been happening.

The prosecutor said the victim concluded by saying she had always been an outgoing person but now ‘in short feels to be a shell of her former self’ and ‘she feels she will never be able to trust anyone again’.

David Singh, for Harries, said the defendant accepted his behaviour had been inexcusable. He said his client’s ‘quest to find out if she was cheating on him became all-consuming’ and had ultimately cost him the relationship.

The barrister said: ‘He attempted to test his partner’s fidelity by laying snares and traps. He got the answer he wanted – but ironically the cost of it was the relationship itself.’

He added that Harries was a hard-working father to an 11-year-old son and needs to address his insecurity issues in the hope he can have a normal relationship in the future.

Recorder Simon Mills described the defendant’s behaviour as ‘bizarre but also wicked’ which had inflicted ‘a form of emotional violence’ on his former partner.

He said he had taken into account the possibility that Harries would lose his job of 20 years if sent to prison and was mindful of the impact on his son but he said only a sentence of immediate custody was appropriate in the circumstances.

Giving the defendant credit for his guilty plea the recorder sentenced him to 12 months in prison. Harries will serve up to half that period in custody before being released on licence to serve the remainder in the community.

Harries will also be subject to an indefinite restraining order banning him from contacting his victim and from entering the town of Pembroke.