Buy a holiday home for £10k: Julia Bradbury reveals she bought and renovated a picture-postcard pied-a-terre in Portugal on a shoestring budget (and she says YOU could do the same)

Julia Bradbury’s holiday home is an idyllic blue cottage in a tiny Portuguese village where she can throw open her shuttered windows to reveal a sunny vista of cobbled lanes, fig trees and olive groves reaching up distant hillsides.

Nearby there’s an old-fashioned lido where her children can swim and a pretty medieval town for shopping and restaurants, while the historic city of Porto and the Atlantic’s world-class surfing beaches are an easy day trip away.

It’s the kind of place a TV star can truly kick back and relax in (without even a phone or wi-fi), but the house has a secret that will surprise anyone envious of her glamorous lifestyle: it cost under £10,000 to buy and do up, just twice the cost of the average British family holiday. 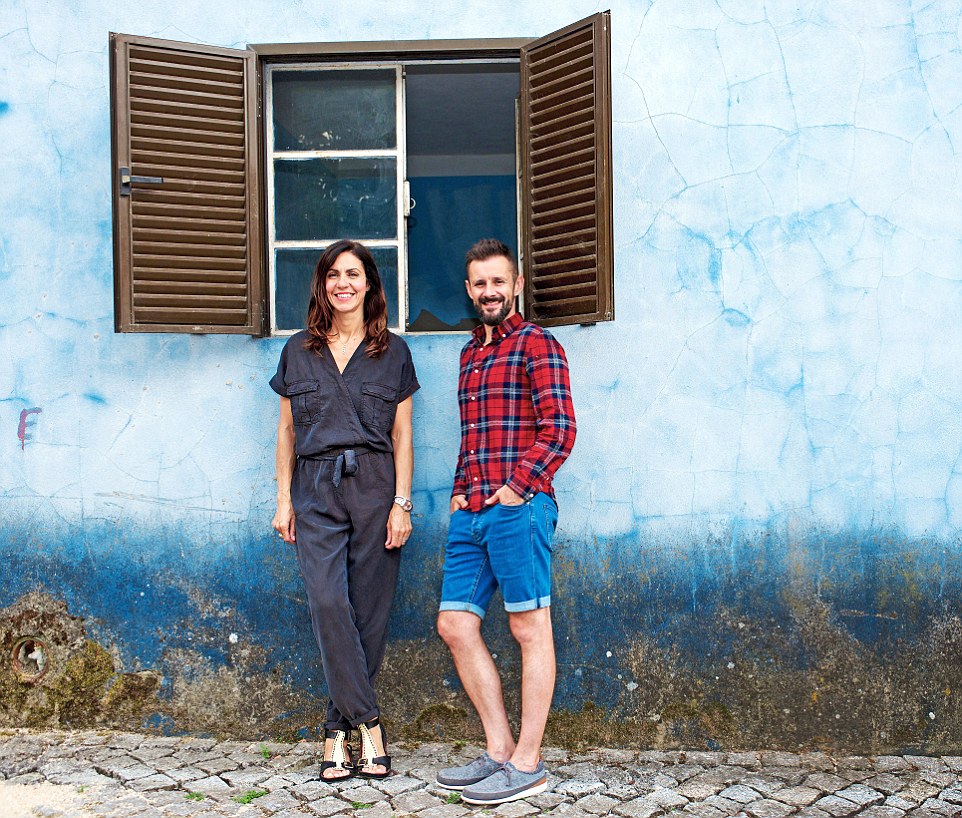 ‘I had started to hear stories of people who’d bought second homes abroad for tiny sums but I couldn’t believe there wasn’t a catch,’ says the presenter.

Curious, she began to research the possibility of buying a summer retreat for herself, her partner and their three children – son Zeph, who will be seven this week, and three-year-old twin daughters Xanthe and Zena.

The result is a new series for ITV, charting Julia’s own purchase and renovation of her tumbledown cottage and investigating the burgeoning trend for Britons buying abroad on a budget. 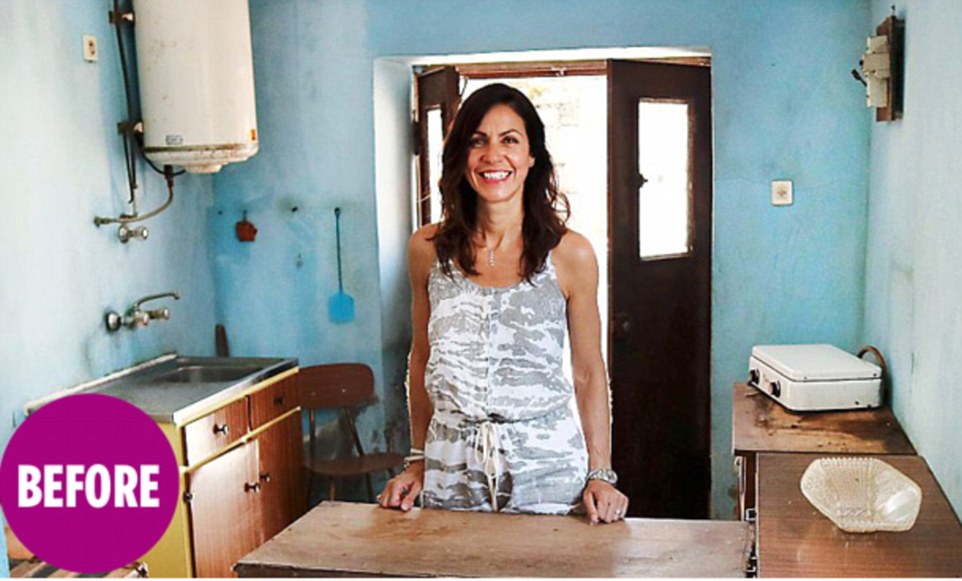 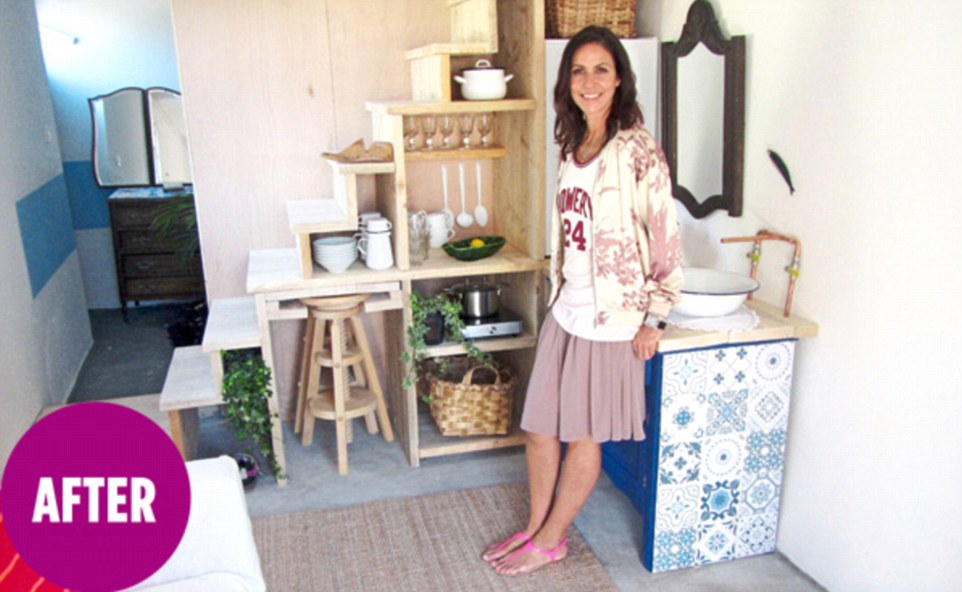 The Portugese property, which she purchased £10,000, looks unrecognisable after renovations

The six-parter, which begins on Tuesday, discovers holiday hideaways in a treehouse, shepherd’s huts, a river boat, troglodyte caves, and other homes in more traditional bricks and mortar.

The countries they were found in include Bulgaria, Spain, France, Hungary and the region that captured Julia’s heart – northern Portugal. She found herself there in May last year after giving up on her dream of buying in the Algarve, where property was well beyond her budget.

The Little Blue House, as it’s known, became hers in June 2017. A dozen visits, some which saw Julia flying out from the UK, others involving a detour while on the road filming elsewhere in Portugal, helped ensure its renovation was finished by last September. 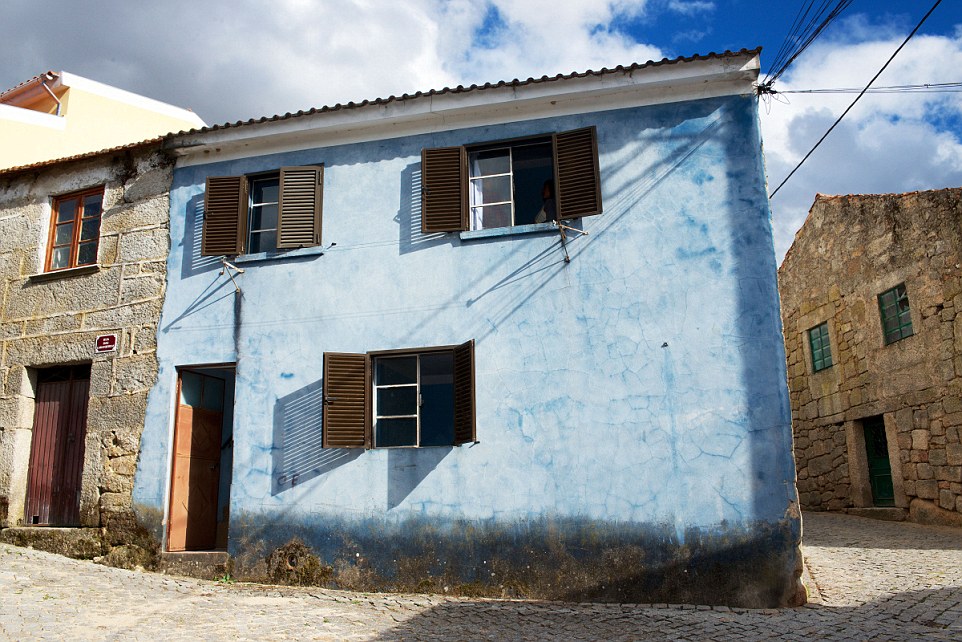 The Portuguese property Julia Bradbury bought for £5,700 and renovated for less than £5,000

‘I saved money by haggling over the asking price and then cheekily requesting all the rustic furniture be included in the deal too.

The final purchase price was £5,700. I spent about £900 on legal fees, and the remainder went on tradesmen and building materials.

I allowed myself a contingency fund, and when I discovered the nastiest of plumbing problems – a cesspit under the bathroom – I was very glad of it.’

As well as extensive plumbing, Julia had to have the house connected to mains electricity and rewired, the kitchen and bathroom refurbished and the whole place made snug and secure. In the show she is seen calling on her friend, TV salvage expert Max McMurdo, for ideas and practical help.

‘I’m pretty handy with a sledgehammer, am happy to try tiling and anyone can paint a wall, but Max was the one who said, “Bradbury, I’ve found a way to turn your entire staircase around,” ’ she laughs. 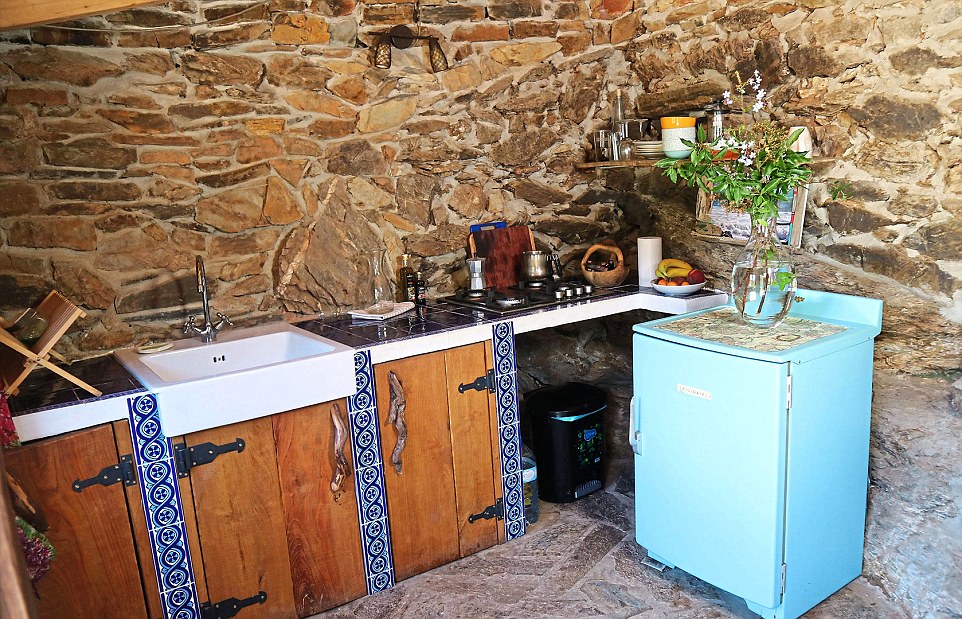 Another friend who speaks Portuguese also proved invaluable, liaising with builders and keeping neighbours informed of developments. ‘I can speak enough Portuguese to order a custard tart and a cup of coffee,’ says Julia. ‘As with any project anywhere, I had issues with builders, including one who tried to get us to install a lighting system that would have lit up a mansion, never mind my one-up, one-down cottage. We agreed a deal with him and then he disappeared anyway. That’s not the kind of problem you can solve with sign language.’

Max’s innovative approach and zeal for recycling helped turn Julia’s cottage into a budget-friendly bolthole. ‘For example, he helped me create a pulley-system partition with bunk beds attached which slides across the master bedroom, dividing one big room into two smaller spaces. The idea works well and it gives us – a family of five – the space we need,’ she says.

Julia hopes to spend at least a couple of weeks a year in Portugal as she takes a break from her hectic filming schedule. Friends and family have an open invitation too. 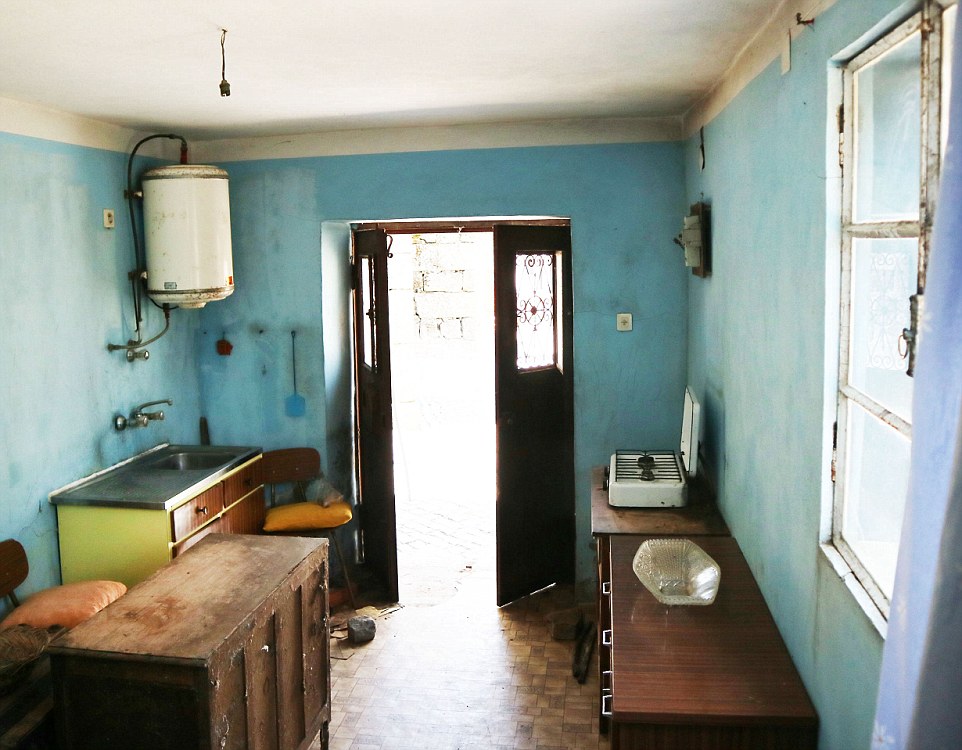 The rundown villa didn’t look like much when she made the purchase (pictured), but after a few simple – and cheap – changes she transformed it into a true holiday home

‘I feel very at home in the village already,’ she says. ‘During the renovations, neighbours cooked for us, they let us use their electricity, and one lady even invited me to have a shower at her house. It’s such a different way of life to where we live in West London, or even where I grew up in Rutland. It’s slow and peaceful and we all benefit.’

Some of Julia’s earliest memories are holidays at her Greek grandmother’s home in a seaside village outside Athens. She would feast on traditional kebabs and fruit from the trees lining the streets. Most of all, she had a freedom to roam that she wasn’t allowed at home.

‘That is something I wanted to recreate for my own children and I know I’ve found it in Portugal,’ she says. ‘It’s worth a lot more than £10,000 to me: in fact, it’s priceless.’

– All main high street banks offer international mortgages, but do find out which countries they operate in as generally they provide mortgages only in countries where they have an office.

– You can get a mortgage with an overseas lender through a specialist broker, but overseas lenders are not covered by the FCA (Financial Conduct Authority) so you’re not protected if you run into problems with it.

– Borrowing in a foreign currency is risky – you are subject to the vagaries of exchange rates.

– Deposits tend to be higher than in the UK – often 30 to 40 per cent of the value – and non-refundable, so be sure before paying out cash.

– Ensure the person or company selling you the property actually owns it and had permission to build the property. Check that you have the right planning consent and licences, your property has the correct title and you are registered as the official owner.

– Use an independent lawyer – ideally in the country itself – with no connection to the developer or agent. They need to be fluent in English and the local language.

– Beware of property development companies in popular resorts, particularly when buying off-plan. Don’t succumb to pressure to sign up with a deposit before you’ve taken independent advice.

– Don’t expect the price of your property to rise. Many buyers in Spain, for example, are trapped in properties they cannot sell.

– If you’re going to rent out your property, you’ll have to pay income tax. In fact, you may have to pay tax both in the country itself and in the UK. Check with your local lawyer about this.

– When you sell the property, you will have to pay capital gains tax if it’s not your main home. In some countries this is reduced or waived depending how long you have owned the property.

– Be aware that your heirs might have to pay inheritance tax on your property when you die, depending on which country it’s in.

In the programme, Julia meets fellow Brits who’ve also bought property for £10k or under and transformed them into fabulous homes. 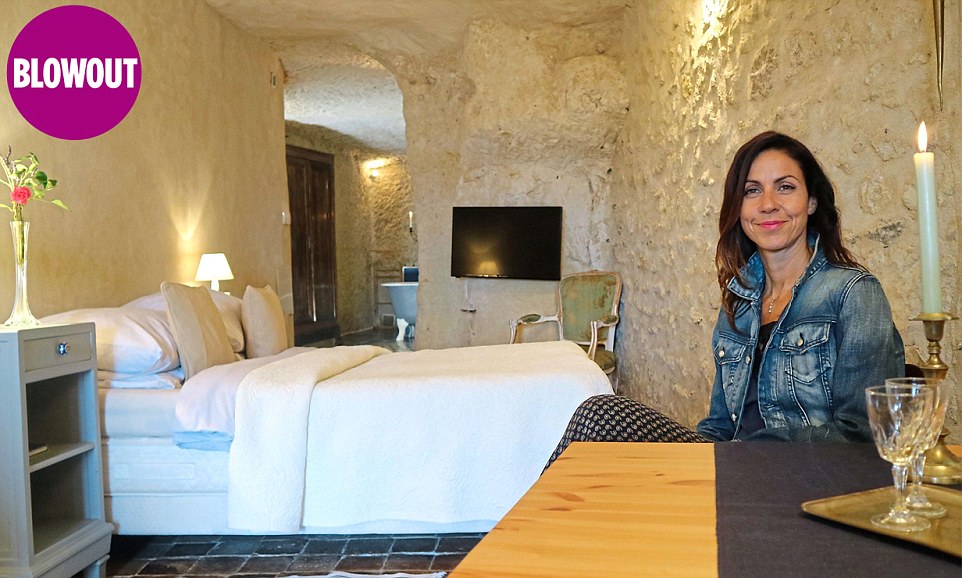 Alexis and Lottie paid just €1 for their three troglodyte caves carved into a limestone cliff but had to pledge to reinforce the roof, at a more substantial £8,500 per cave.

The couple sold their vintage Citroen car to cover the cost of the first cave and then funded the work on the second (now their home) and third by renting it out.

Today, Cave Number One is warm, whitewashed and elegantly tiled with a smart kitchen and stunning bathroom whose roll-top freestanding bath was salvaged from a field for free.

The couple, with no DIY experience, have done everything themselves. ‘We didn’t have much choice,’ says Lottie. ‘In the end, doing something like this forces you to do stuff you’re not comfortable with, or are even scared to do!’ 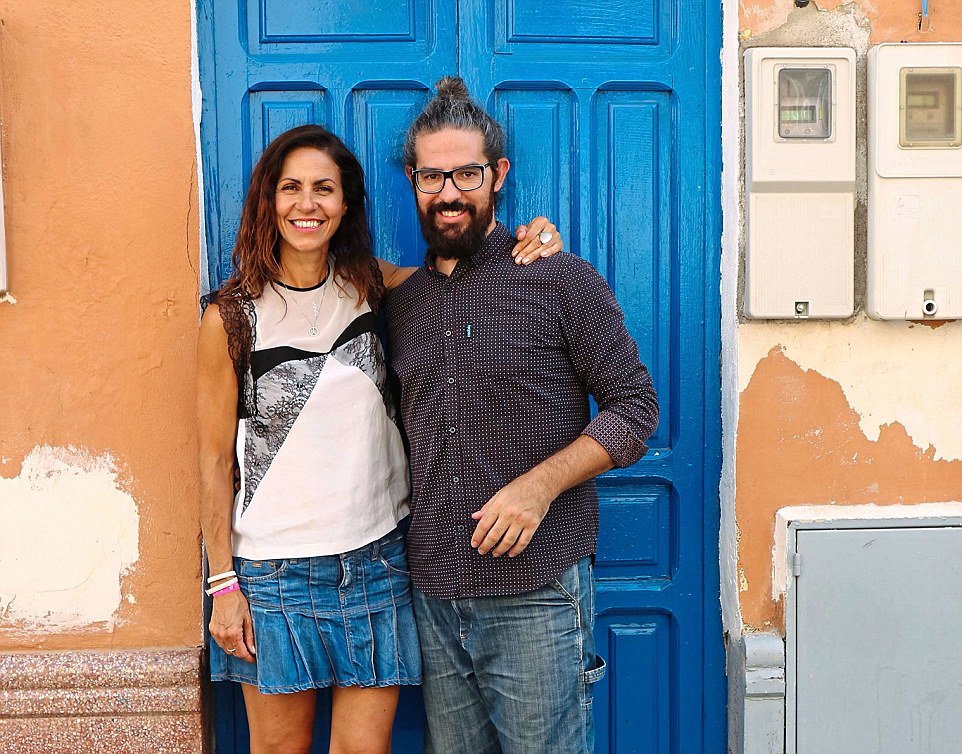 Ivan, right with Julia, bought this one- bedroom apartment for £8,000 and paid £2,800 on basic renovations. He furnished the property with an inspired use of second-hand furniture and salvaged material, including a lamp made from an old bicycle. 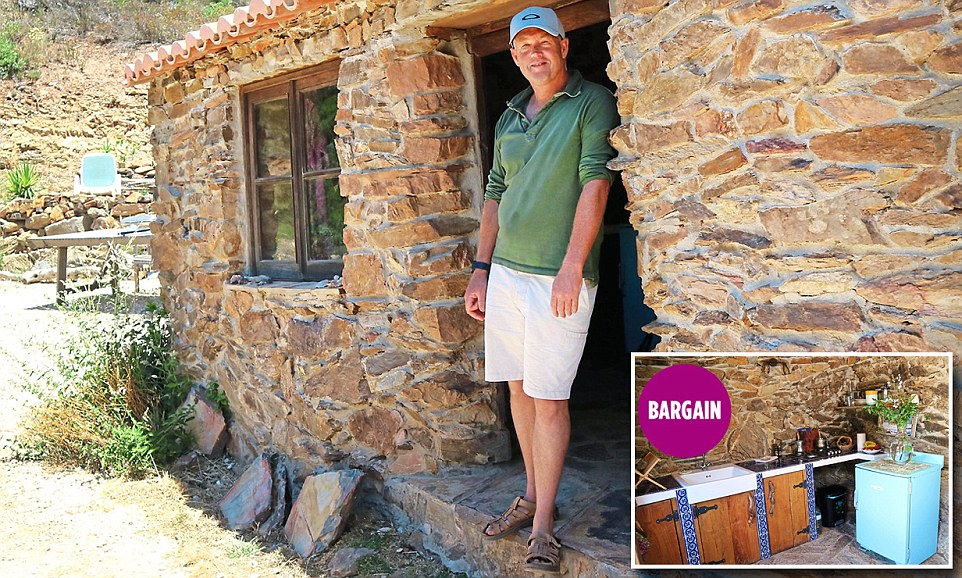 Surfer Richard, above, originally from Somerset, loves Portugal’s windswept beaches and big waves. He found two hectares of land with a pair of shepherds’ huts for sale, paying £7,000 for the land and then £3,500 to refurbish the two huts back in 2003.

They are now the epitome of rustic luxury – stone-built, well-timbered and red-tile roofed.

Additionally, Richard has built a self-contained treehouse fully equipped and solar-powered with its own kitchen and an outside bathroom, which he rents out as a third property. 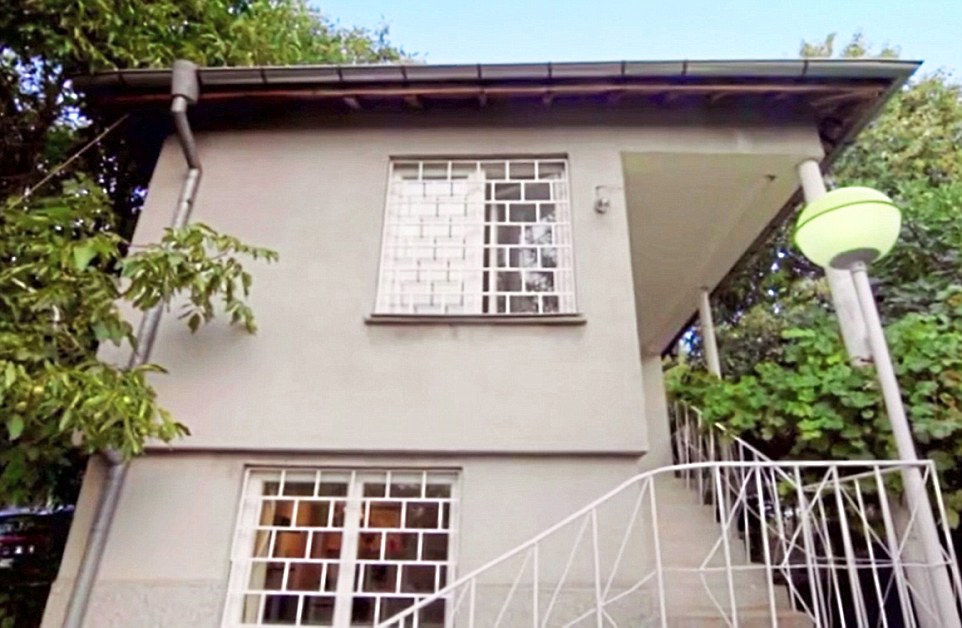 Simon and Philip bought their smart, grey two-bedroom cottage on a whim and a credit card back in 2004 – it cost just £7,000.

The initial purchase was paid off over the next three years and they refurbished it for £2,000, the bulk of which was spent on flooring and windows.

They have since put down roots in the rural village and become part of the local community.

Their home has a contemporary downstairs living room, a bijou kitchen and an unusual external staircase, meaning the couple have to head outside to go upstairs to the two bedrooms and bathroom.

‘Bulgaria is still affordable, truly within the reach of a lot of people, and you can live really well out here,’ they say.