What started as a straight-forward letter writing exercise at one Melbourne school has blossomed into a thousand paper flowers, adorned with the words of young children and given to some of the city’s most vulnerable. 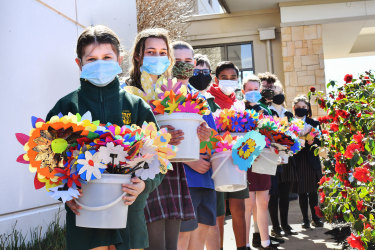 Students at Scoresby Secondary College have been tuning into the news of the escalating loss of life in Melbourne’s aged care homes, and their concern has been coming out in their writing, principal Gail Major says.

So the school gave them a task of writing to the residents of nearby aged care home Arcare Knox, in an effort to channel their anxiety into something good.

She shared the letter writing idea with other local principals at an inter-school video conference, and seven primary schools got on board, giving their younger pupils the task of making flowers from coloured paper, then writing short messages.

At first, the project was limited to vulnerable students learning on-site, but as word got out in newsletters and messaging channels it caught on with the wider school community.

Soon, parents and even teachers got in on the act.

“We initially had our on-site students doing it and the project was mentioned at our online assembly,” Kent Park Primary School principal Kieran Denver said.

“That was probably the tipping point; we had some families bring in 10 to 15 flowers that they’d made and it really started the whole thing off.”

Mr Denver said his school in Ferntree Gully has been mindful of protecting students' mental health through the pandemic, at a time when some of their parents have lost work and exposure to the media can be overwhelming.

“For them to think of others and to be empowered to do something nice for someone else … it just fitted in beautifully and I think that’s why we got such a great response,” he said.

On Thursday children from each of the eight schools delivered fully loaded buckets of their (sanitised) creations to the residents of Arcare Knox. 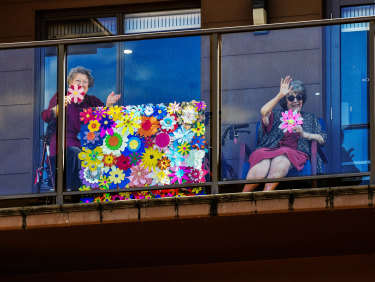 Arcare’s chain of aged care facilities have not been spared the impact of Melbourne's second wave, with outbreaks among staff and residents forcing several homes to go into a hard 14-day lockdown.

Knox’s residents have been restricted to occasional “window visits” to prevent transmission of COVID-19, so came out onto the balconies or peered through their windows to greet the schoolchildren.

They were buzzing after the students’ visit, as well as being impressed with some of the thoughtful messages, facility manager Sally Annesley said.

“It’s just really brightened the place up,” she said.

“One of them said it’s not the first day of spring but it feels like it, it makes me feel like living and enjoying life.”