It has become a rallying point for anti-immigration protests and, in recent days, the setting for the worst riots the country has seen in more than three decades. 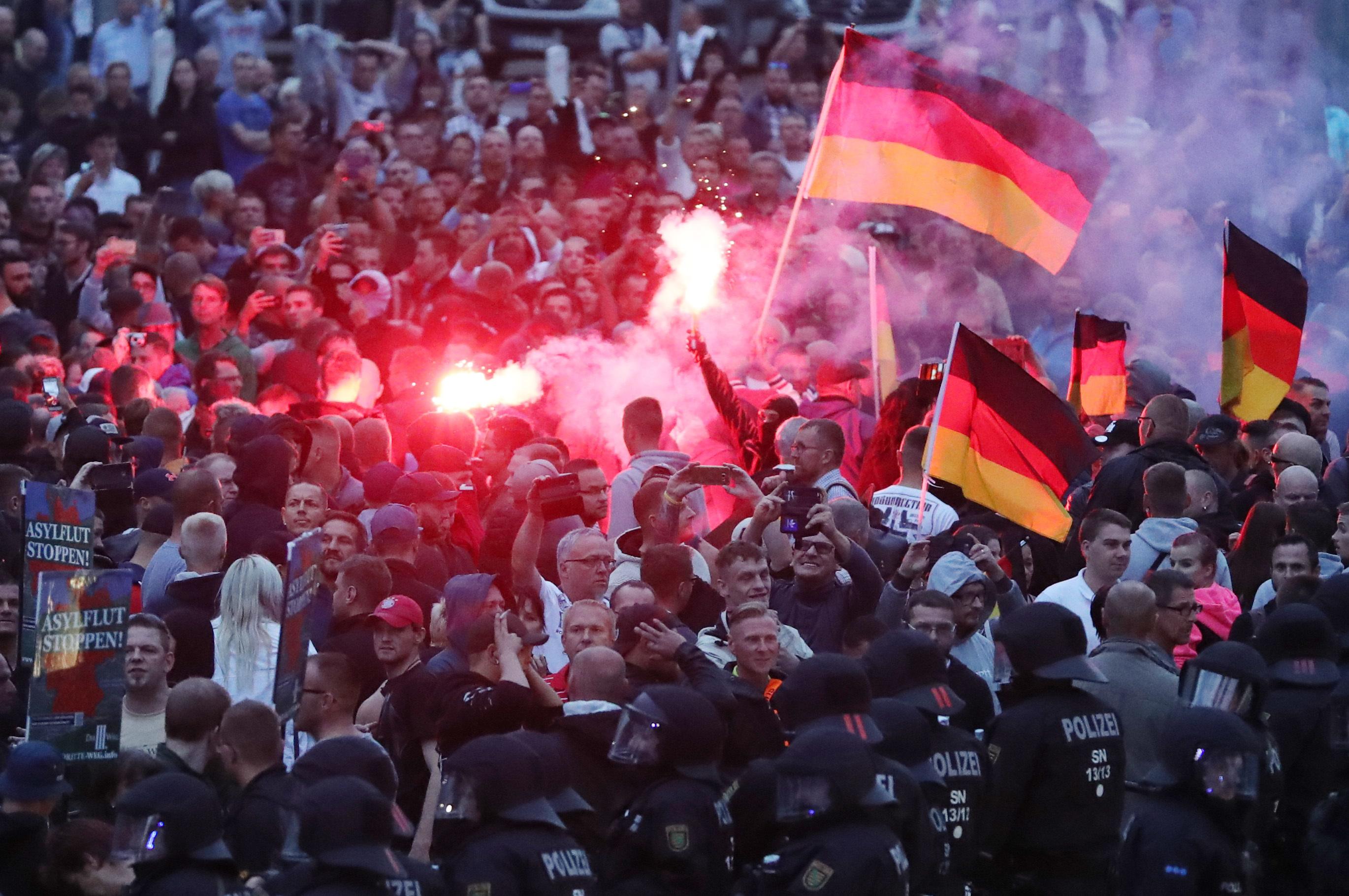 The killing of a German national in the early hours of Sunday triggered clashes in the once thriving industrial city, in the formerly communist side of eastern Germany.

With tension simmering over Angela Merkel’s decision in 2015 to allow 1.3million migrants into the country, the killing prompted thousands of far-right activists to take to the streets to vent their fury.

Outnumbering police officers ten to one, neo-Nazis rampaged through the city’s winding streets, giving the Hitler salute — illegal in Germany — and hurling bottles and fireworks. 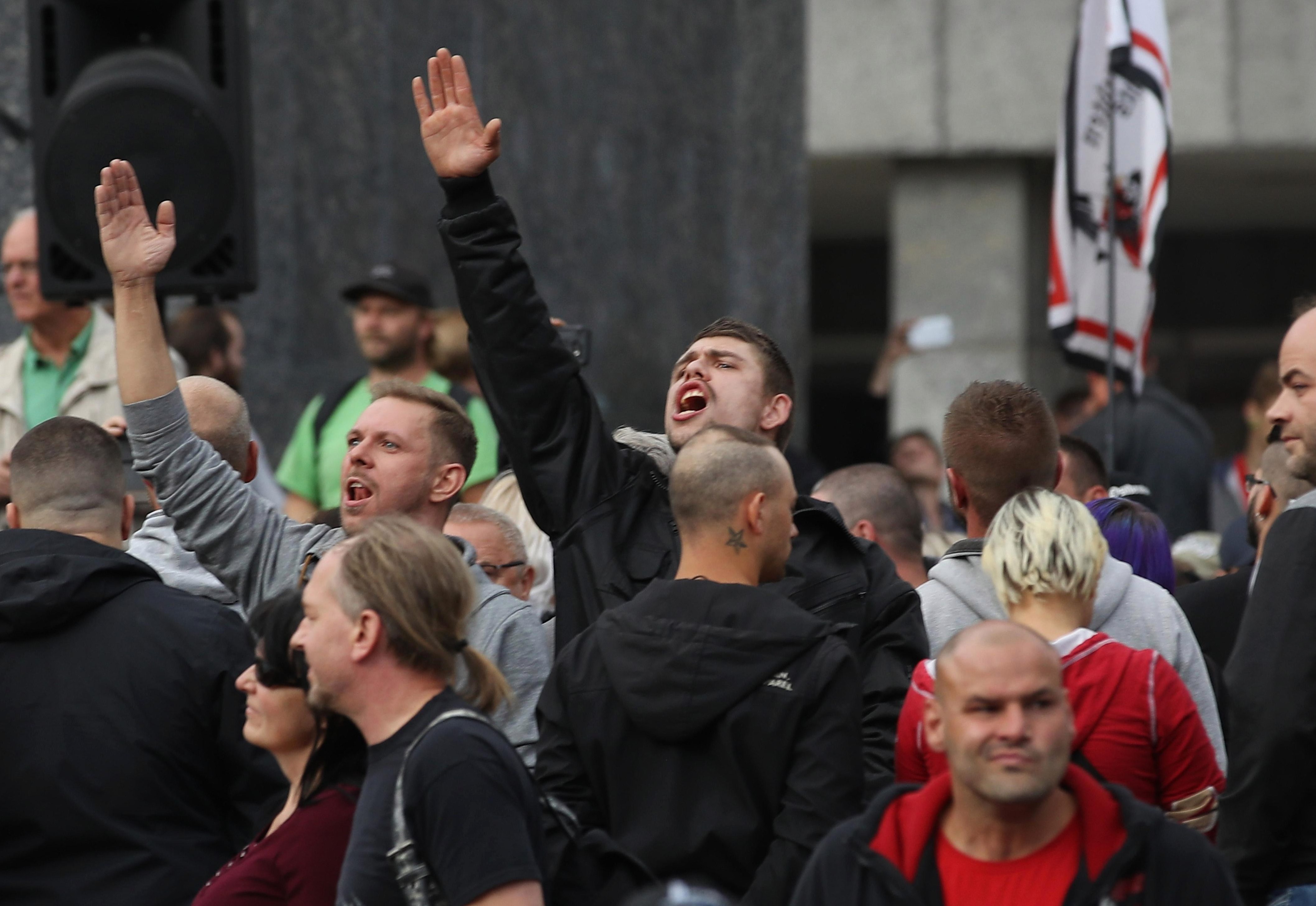 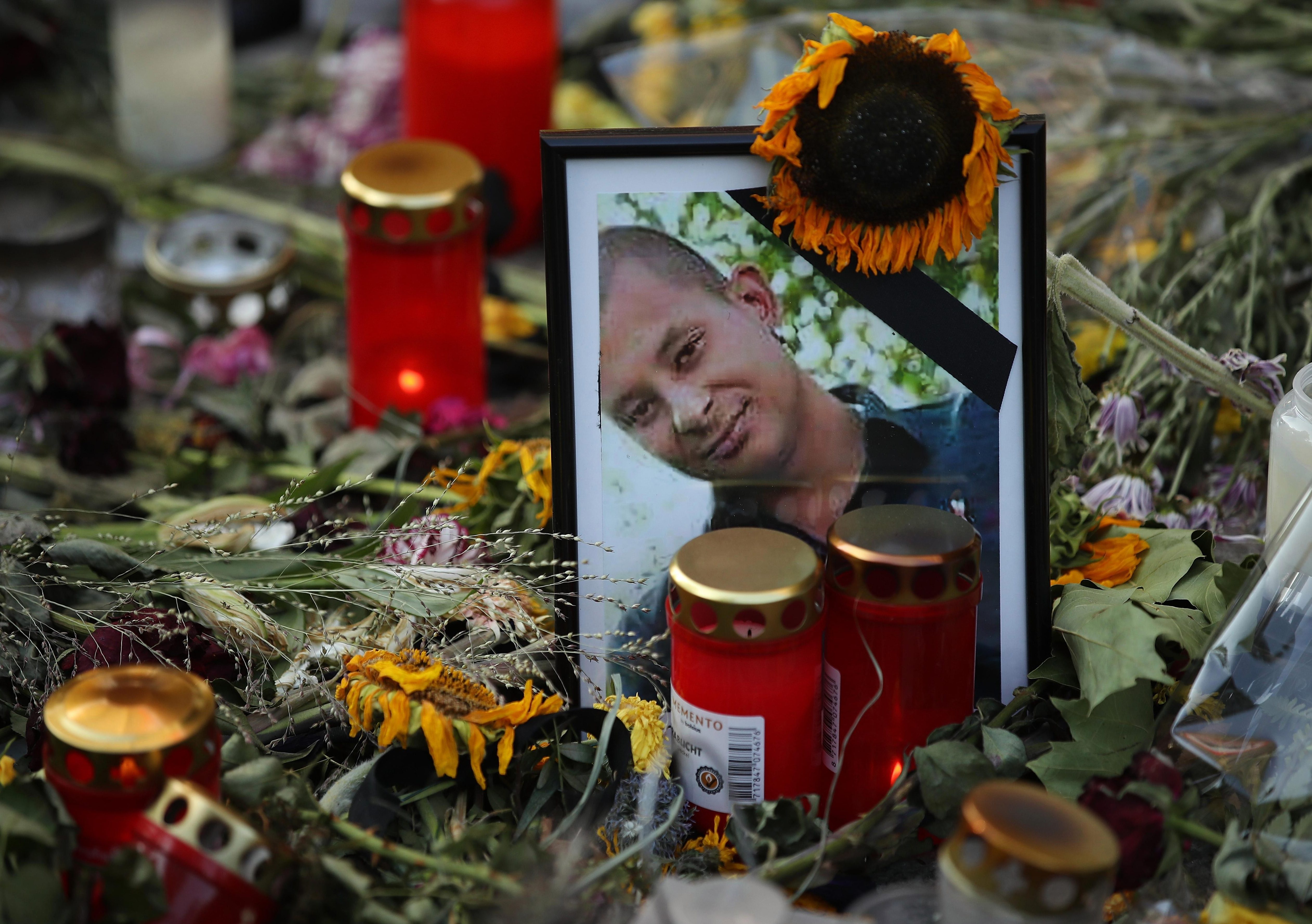 Anyone who looked “non-German” was apparently set upon.

In Wismar, northern Germany, a Syrian migrant was attacked with an iron chain by three men, while further protests have sprung in Munich and Dresden.

As a so-called “pogrom mood” sweeps across the country, Chemnitz is bracing itself for more violence today, with more than 10,000 expected to descend on the city.

Last night, shopkeepers and bar owners were boarding up their windows in anticipation of fierce protests, the like of which they have not seen since the communist German Democratic Republic fell in 1989. 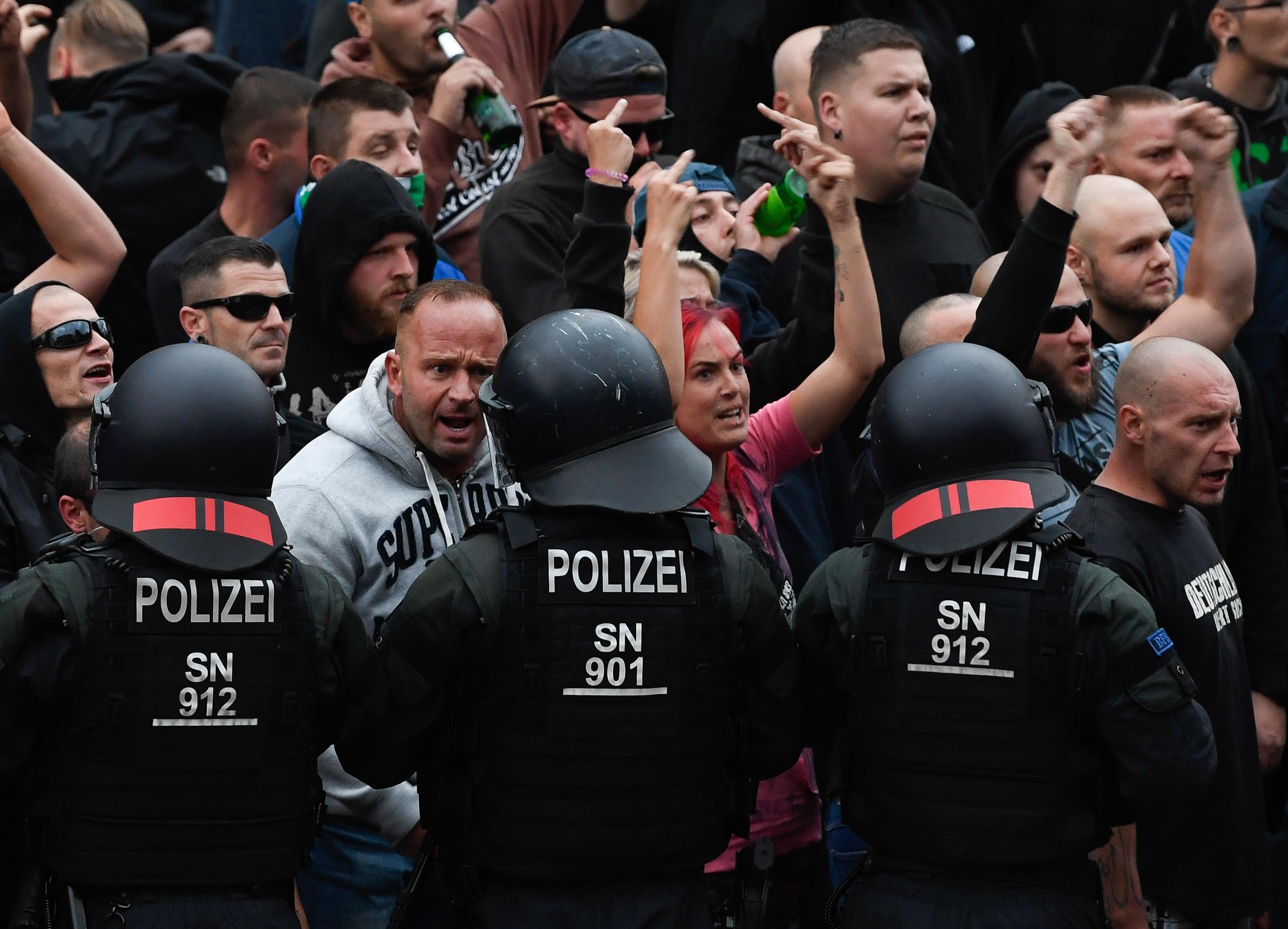 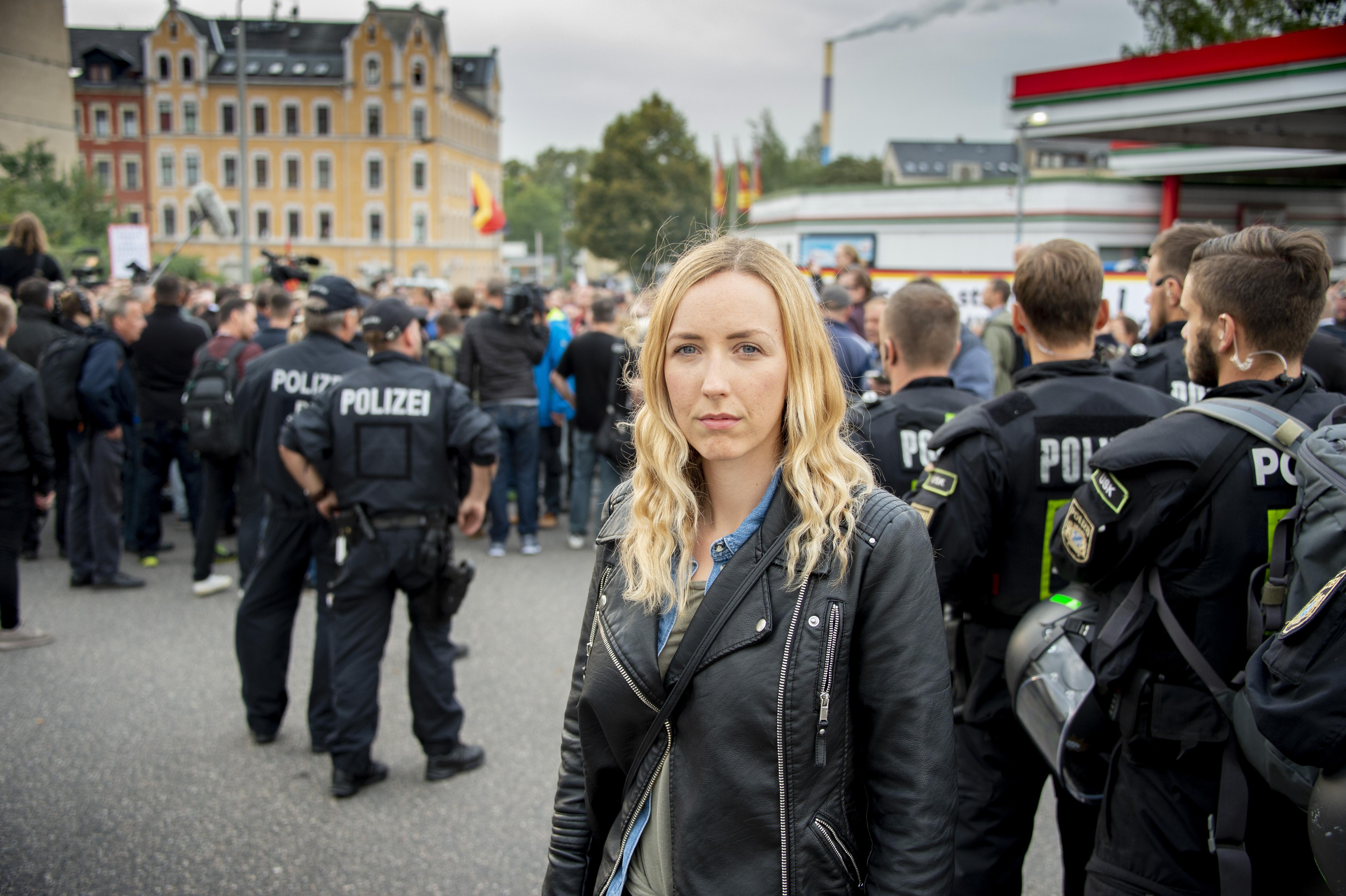 Locals say there is one thing to blame for the divisions that have now broken out into open warfare — the government’s controversial immigration policy.

Property worker Sonja Unsold, who lives in Chemnitz, told us: “You can feel the tension in the air and it’s escalating.

“The politicians thought they could just open the door to all sorts of people but they haven’t managed the integration process very well.

“They like to pretend there’s no problem but any ordinary person knows it’s a very intense problem indeed.”

Sonja, 54, says the clashes were inevitable, especially in such declining areas as her home town, where locals feel like they are losing out to migrants when it comes to homes and jobs. 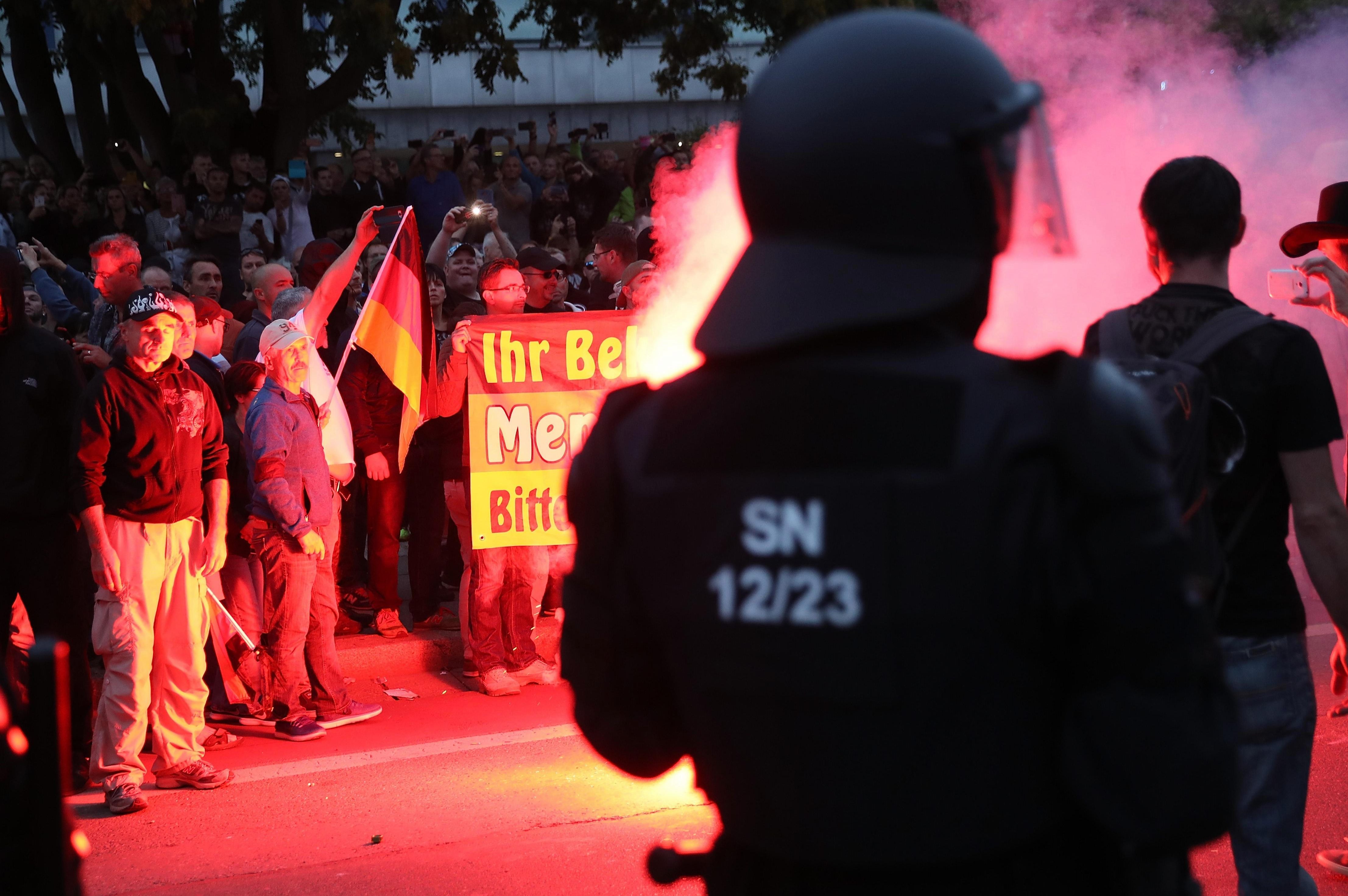 She added: “What’s happening in Chemnitz was always going to happen. I hope other countries learn from it.”

The horrifying events over the past week are a stark warning to the rest of Europe, showing how rapidly a single crime can spill into mass riots and violence.

They began when Daniel, a married dad of Cuban descent, was stabbed during a fight after a festival to celebrate the city’s 875th anniversary. A 22-year-old Iraqi and a 23-year-old Syrian were held on suspicion of murder. Yesterday, a German prison guard admitted leaking the arrest warrant for the Iraqi suspect. 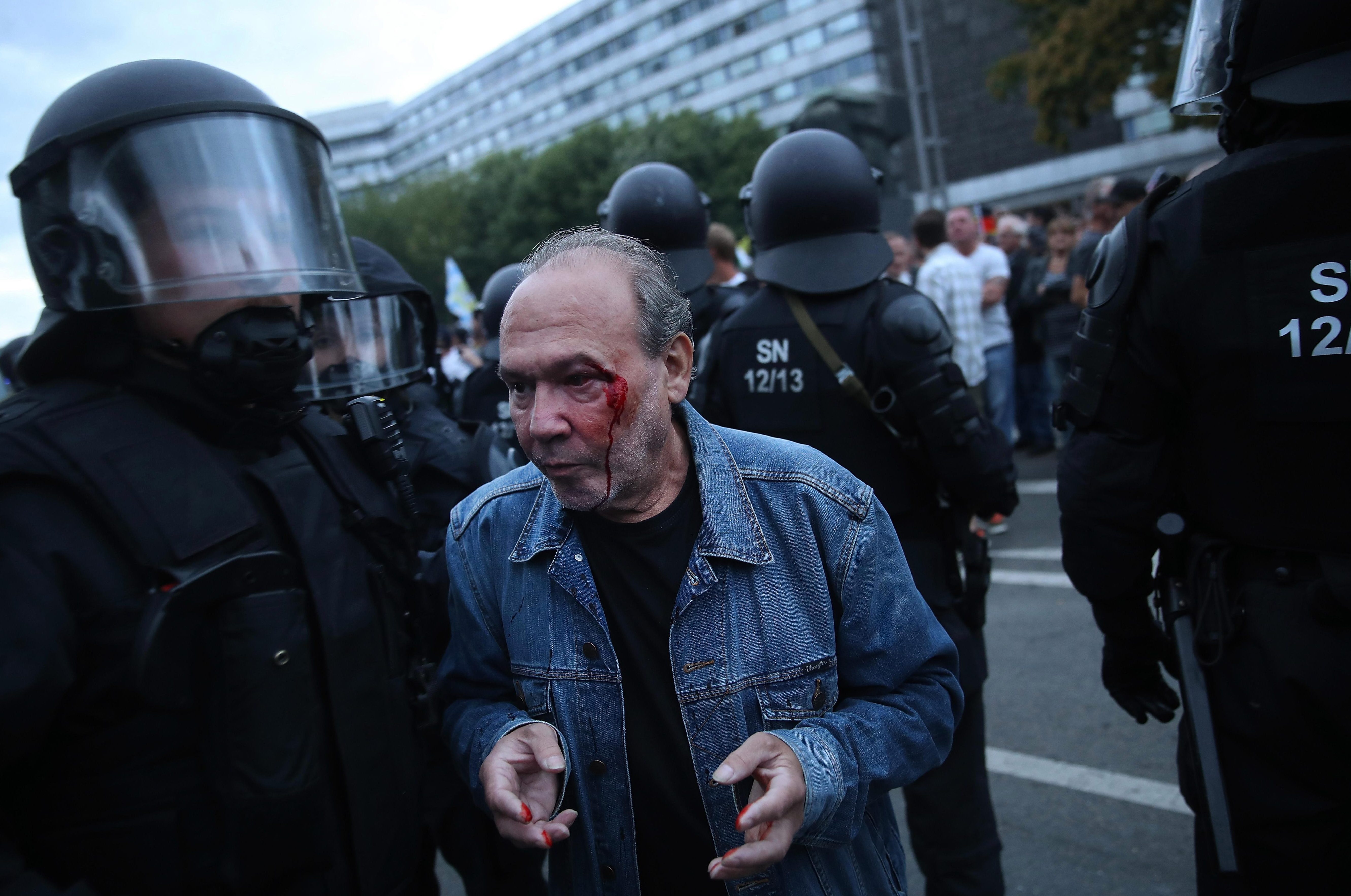 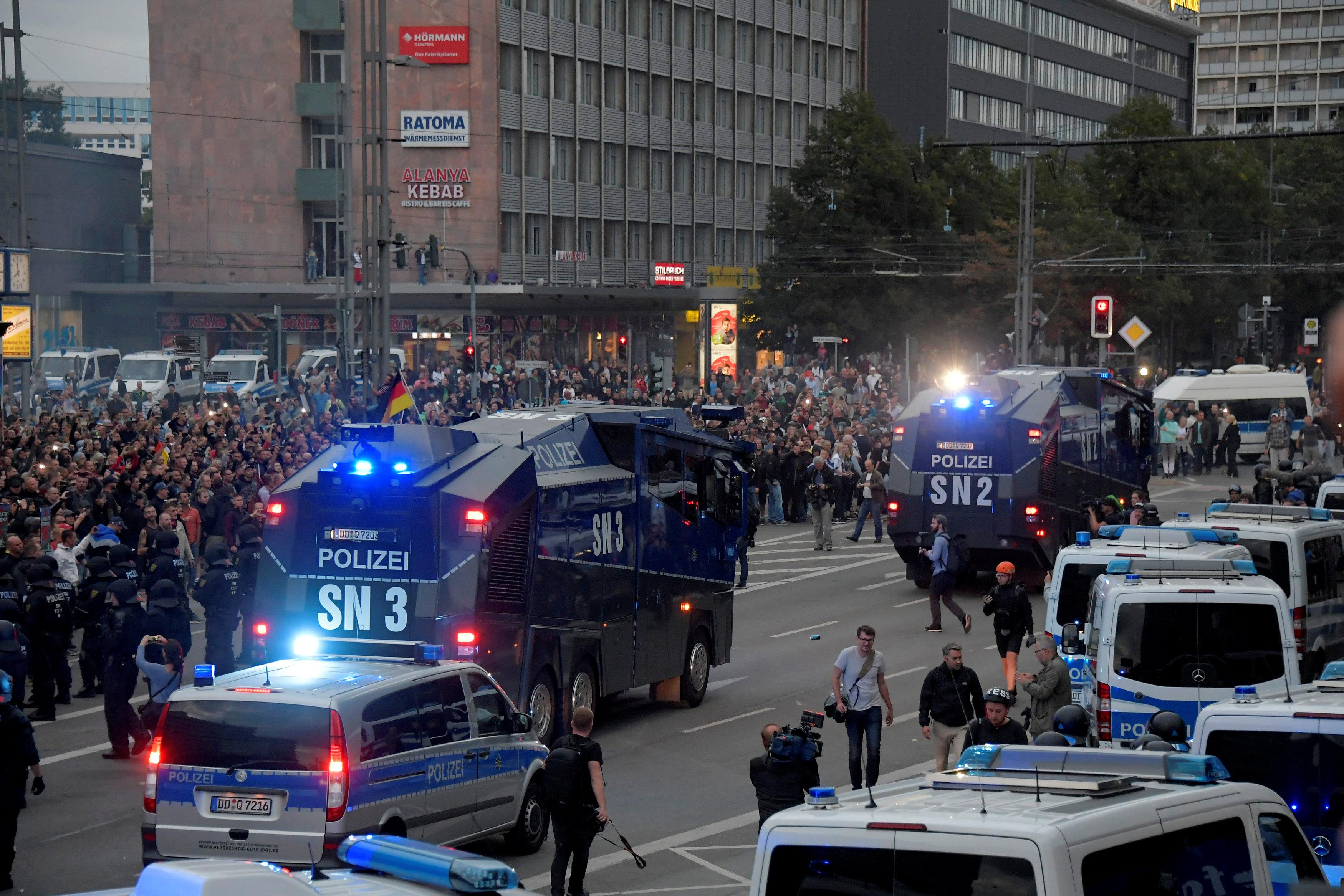 Daniel Zabel, 39, who has now been suspended, said: “I wanted the truth and only the truth to reach the public.” The leak was shared among far-right groups online.

Within hours, thousands of protesters, from all over Germany, had mobilised and were on the Chemnitz streets.

They chanted Nazi slogans, including “Wir sind das Volk” (“We are the people”), and some openly flashed the Nazi salute.

At least 18 people were injured on Monday when far-right extremists clashed with counter-protesters. 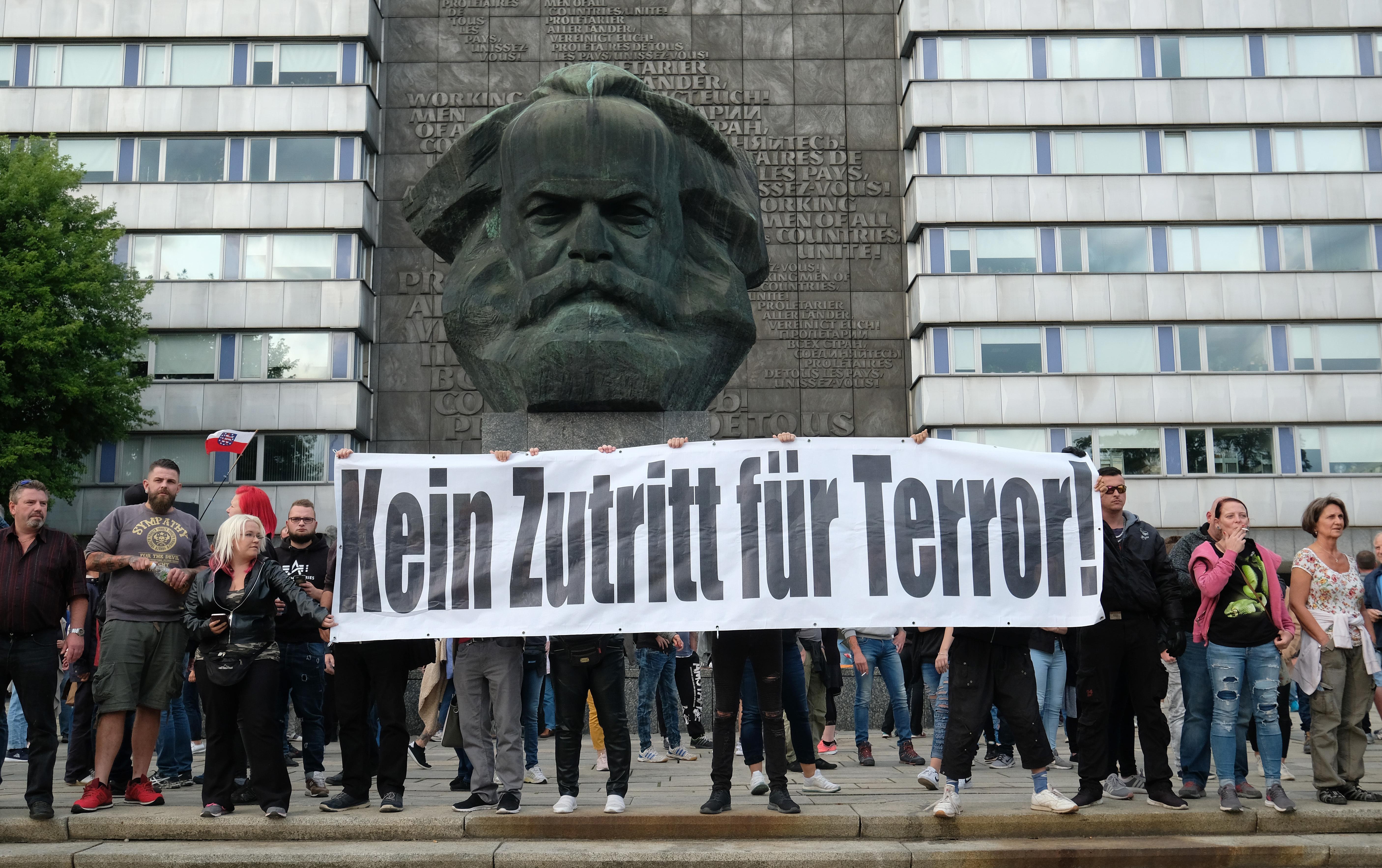 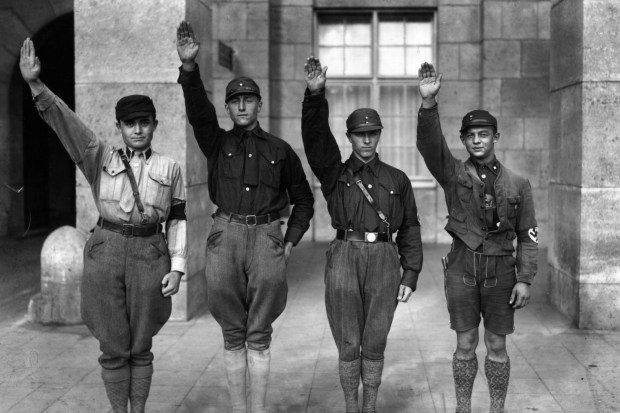 Copying the Nazi salute is a criminal offence. A year ago, two Chinese tourists were arrested for raising their outstretched right arm outside the Reichstag building, the seat of the lower house of Parliament, in Berlin.

The maximum sentence is three years in jail.

Shouting “Sieg Heil” is also against the law, because this was the way Nazis greeted each other.

The swastika and other Nazi symbols, such as the Iron Cross, can only be used in educational material or for historical research.

Germans are also banned from choosing the name Adolf Hitler for their child.

Holocaust denial is a criminal offence, with Facebook being warned this year that the rule also applied to posts on its social network.

The disturbing scenes evoked memories of Germany’s dark Nazi past. The unprepared police were vastly outnumbered by an estimated 6,000 extremists.

Far-right groups have been gaining traction ever since Mrs Merkel’s decision to open the nation’s doors to migrants.

The Alternative for Germany party, likened to Ukip, topped the polls in some towns in last year’s election, while the so-called “pinstripe Nazis”, Patriotic Europeans Against the Islamisation of the West, has also had a rapid rise.

But perhaps the real warning for Chemnitz was the number of “normal, working, local people” who marched alongside the far-right extremists. 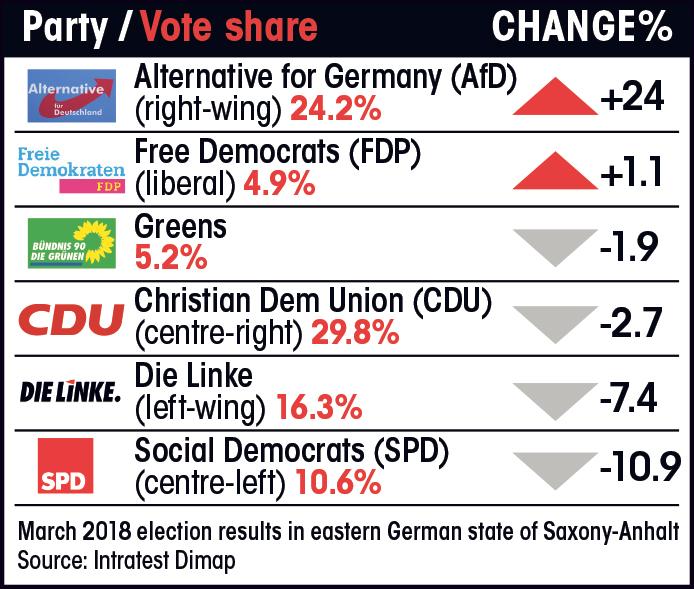 Café worker Maximillian Koch, 34, who did not want to be pictured, said: “People see them getting money and doing nothing. They think immigrants get treated better.”

Neo-Nazis have seized on this growing resentment. After years in the shadows, they are now preaching hate without fear.

A local source highlighted how racists are exploiting people’s emotions by infiltrating protesters to spread their message. She said: “Nazis are getting between normal people and making them react, getting at their emotions.

“People are angry and afraid, and the neo-Nazis play this fear like an instrument. They use it for their aims.” 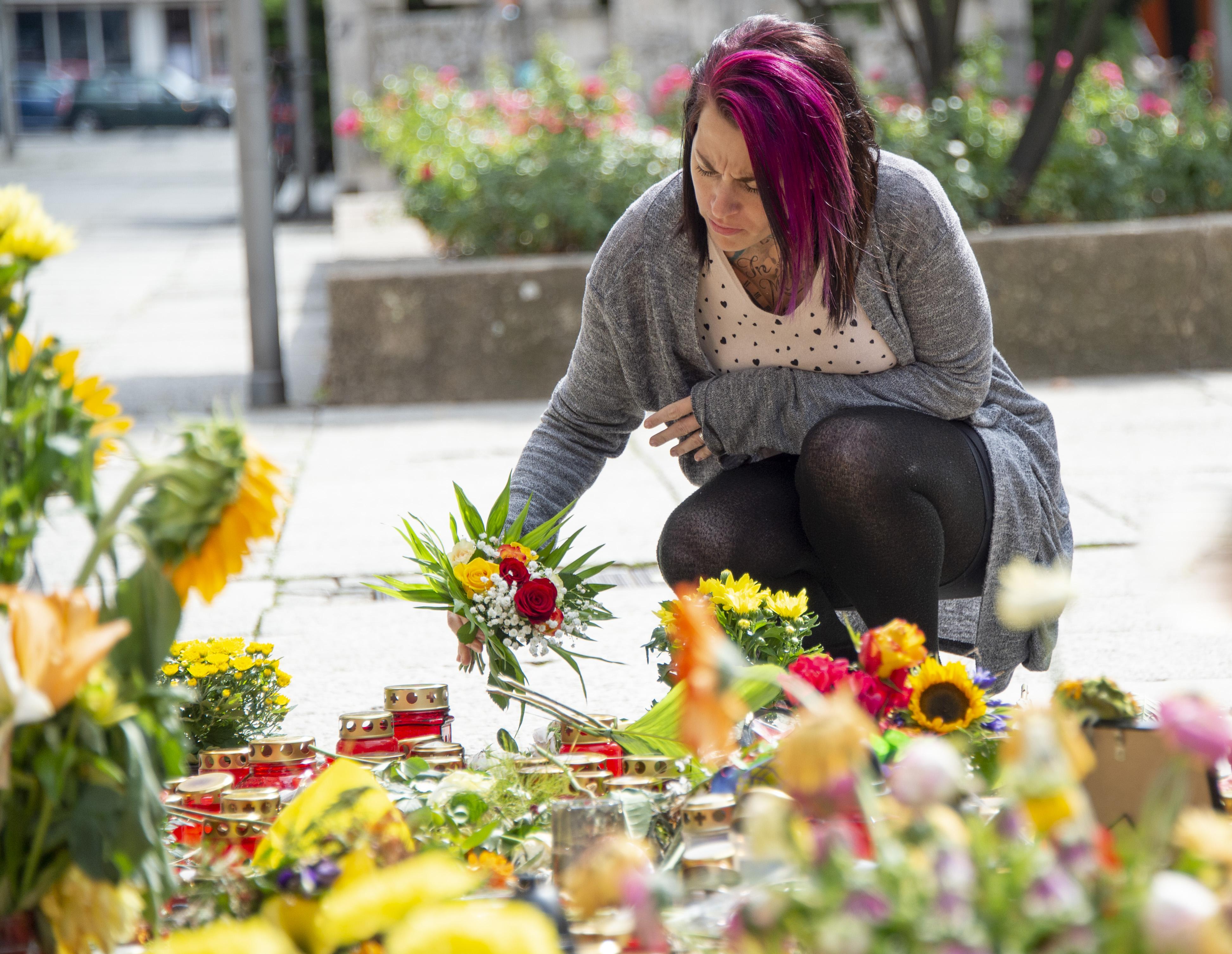 Many were reluctant to talk to journalists — repeating the line “we don’t talk to the Lügenpresse (lying press),” when approached. Around 2,000 gathered at the rally just over the road from where a town-hall-style meeting was being held by local officials at the Chemnitz football stadium in a bid to reassure residents.

With extra police bussed in from five German states, the protest remained largely peaceful. The crowd cheered as they listened to speakers attack Mrs Merkel. They waved German flags and held banners. 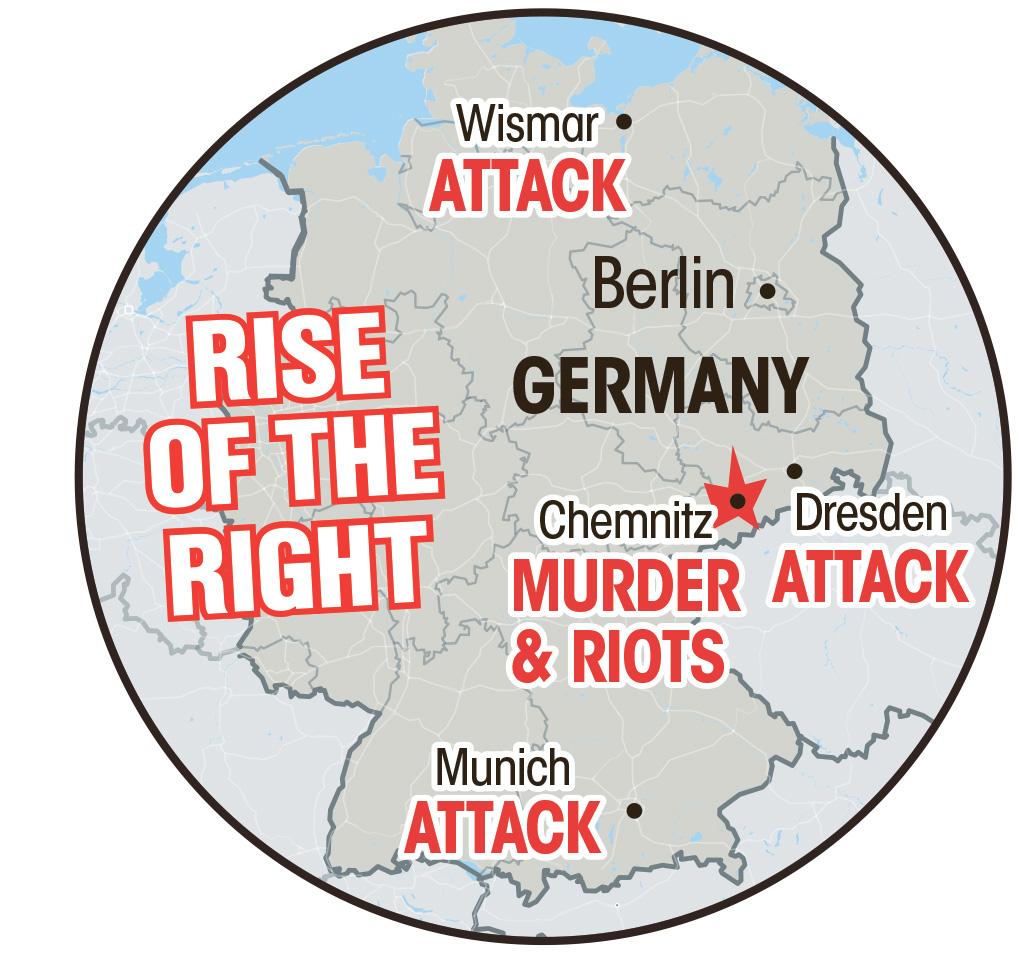 One said: “The people stand up for the future of our children.”

A makeshift shrine on the pavement where Daniel was stabbed has become a focal point for the city’s grief — and anger.

Strangers were yesterday gathering at the spot to lay flowers and light candles. Kevin Pierzchala, 29, said: “Ordinary people are being asked to take justice into their own hands.

“I have got nothing against foreigners but if you’re a guest in our country you must obey the laws.” 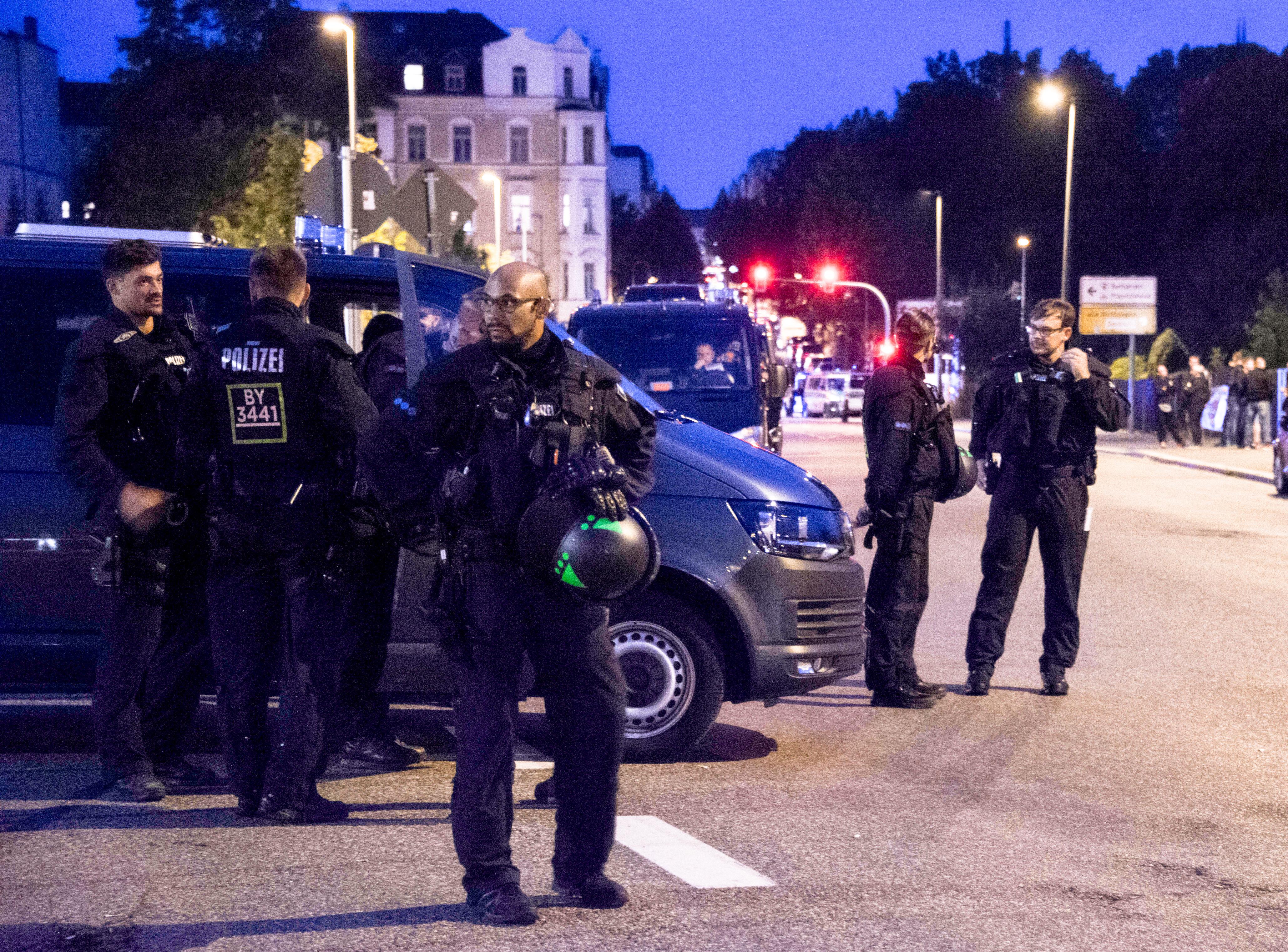 He added Mrs Merkel had “kicked Germany in the ar*e” with her open-door policy, describing her as “the biggest liar there is”.

For people here, Germany’s immigration crisis has got personal. They blame Mrs Merkel for giving unfettered access to migrants, who have now taken one of their own.

The city is a tinderbox. With further riots expected, it will not take much to create a spark.