Kim Kardashian has grown her fortune off sponsored Instagram posts — but one has landed her in hot water with the SEC.

On Monday, the Securities and Exchange Commission announced charges against The Kardashians star. It stems from a June 13, 2021 Instagram post she made promoting a crypto asset security offered by EthereumMax. She did not properly disclose her compensation, violating Section 17(b) of the Securities Act. 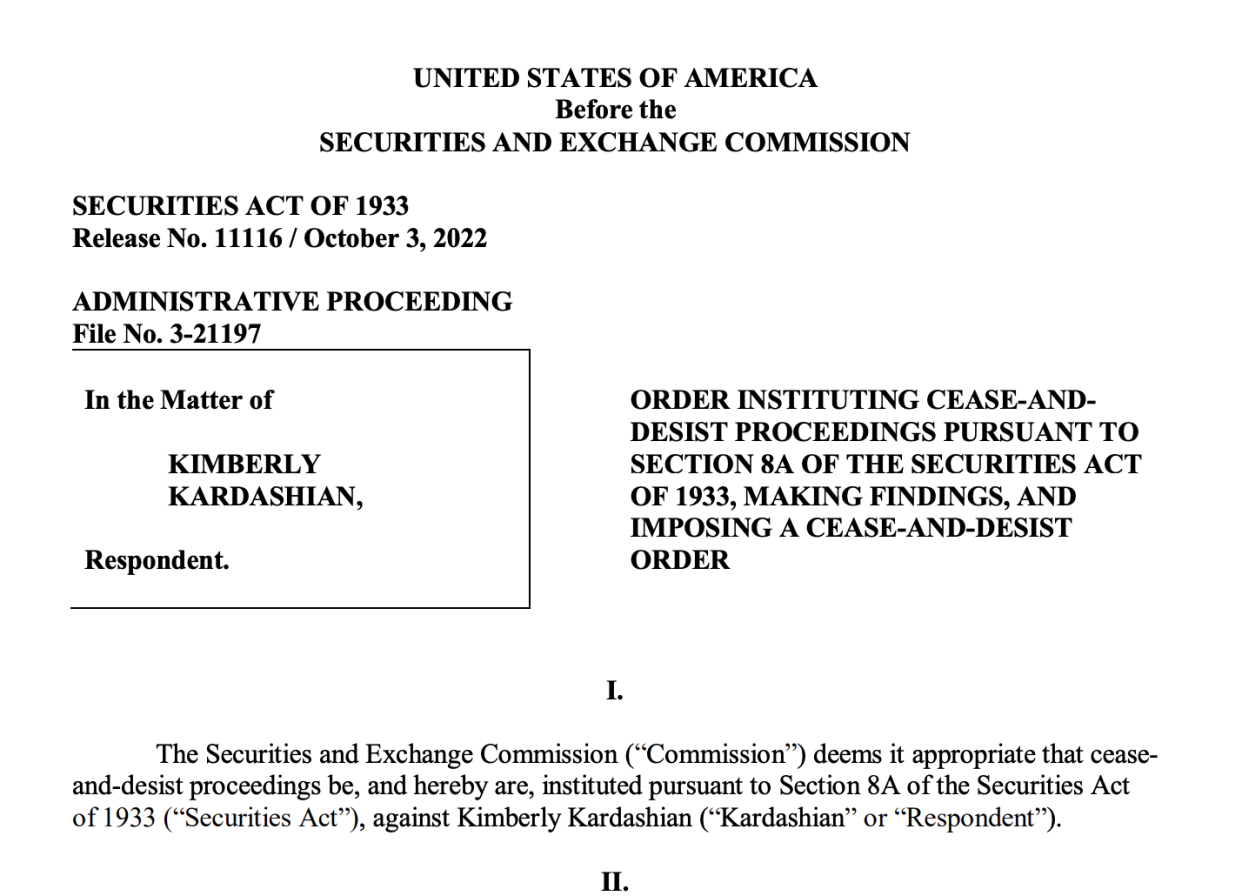 With the announcement of the charge also came news that a settlement was reached. Kardashian agreed to pay back the $250,000 she was paid for the promotion, $10,415.35 in interest and a civil money penalty of $1 million. it must be paid within 20 days. Further, Kardashian, who is cooperating with the SEC's investigation, agreed to not promote crypto securities for three years. However, Kardashian, who is studying to become an attorney, neither admitted to nor denied the regulator's findings.

Today we announced charges against Kim Kardashian for promoting a crypto security offered by EthereumMax without disclosing the payment she received for the promotion.

Kardashian agreed to settle the charges, pay $1.26 million, and cooperate with the investigation.

"This case is a reminder that, when celebrities or influencers endorse investment opportunities, including crypto asset securities, it doesn’t mean that those investment products are right for all investors," Gary Gensler, chairman of the SEC, said in a press release. "We encourage investors to consider an investment’s potential risks and opportunities in light of their own financial goals."

His continued, "Ms. Kardashian’s case also serves as a reminder to celebrities and others that the law requires them to disclose to the public when and how much they are paid to promote investing in securities… Investors are entitled to know whether the publicity of a security is unbiased, and Ms. Kardashian failed to disclose this information."

This case is a reminder that, when celebrities / influencers endorse investment opps, including crypto asset securities, it doesn’t mean those investment products are right for all investors.

Kardashian promoted EthereumMax’s offering on Instagram by touting that she had a "big announcement." The post linked to the crypto business's website, where instructions were provided for potential investors to purchase EMAX tokens. While Kardashian included #AD at the bottom of the post, she didn't disclose the amount of compensation received in exchange for the promotion. 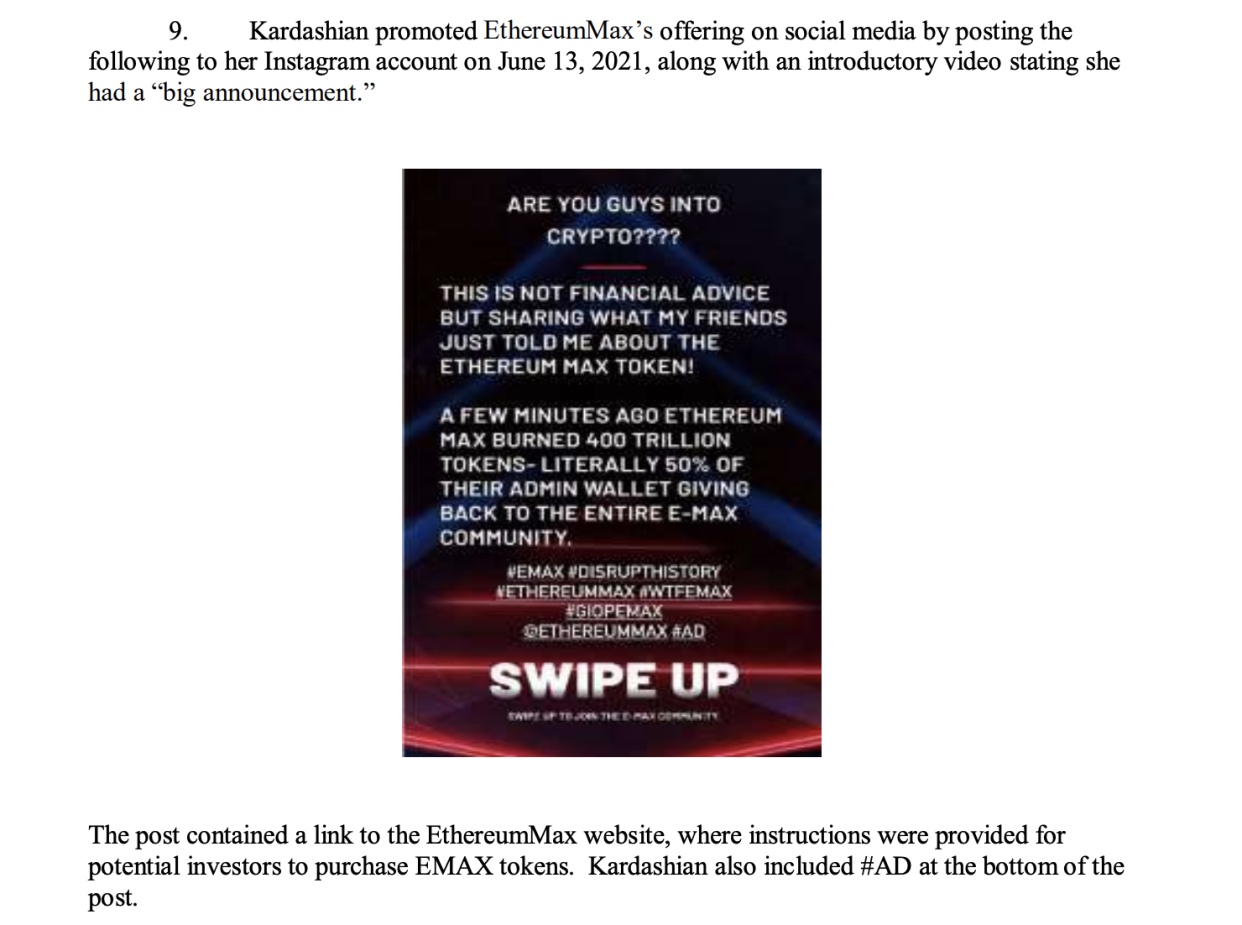 A spokesperson for Kardashian tells Yahoo Entertainment, "Ms. Kardashian is pleased to have resolved this matter with the SEC. Kardashian fully cooperated with the SEC from the very beginning and she remains willing to do whatever she can to assist the SEC in this matter. She wanted to get this matter behind her to avoid a protracted dispute. The agreement she reached with the SEC allows her to do that so that she can move forward with her many different business pursuits."

Kardashian is worth an estimated $1.8 billion and she's grown her fortune with her sponsored Instagram posts. During an appearance on My Guest Needs No Introduction With David Letterman in 2020, the SKIMS and Skkn founder revealed that one Instagram post could bring in "more than we do a whole season" of former E! show Keeping Up With the Kardashians.

She also said in 2019 that she'd become more selective about what she was accepting money to post.

"Now it's a little bit more personal for me," she said at the New York Times Dealbook Conference. "If I have a paid post that comes in and I think, 'OK, well this can fund x amount of people that are behind bars, that can help free them with simple legal fees that they just can't afford, then that would be worth it to me, even if the post might be a little bit off-brand for me.'"

She has come under fire other sponsored posts over the years, including weight loss tea and other diet products and waist trainers, among things. The family also previously severed ties with a bank that promoted a high-fee, prepaid debit card that featured their image. Former Connecticut Attorney General Richard Blumenthal said it unfairly targeted financially unsophisticated young adults, including those enticed by the family's "lives of luxury and extravagance."