A KNIFEMAN who reportedly shouted “Allahu Akbar” and threatened police has been shot dead in the French city of Avignon.

It comes as a man was arrested in Jeddah in Saudi Arabia after attacking a guard at the French consulate – just hours after a suspected terror attack in Nice left three people dead. 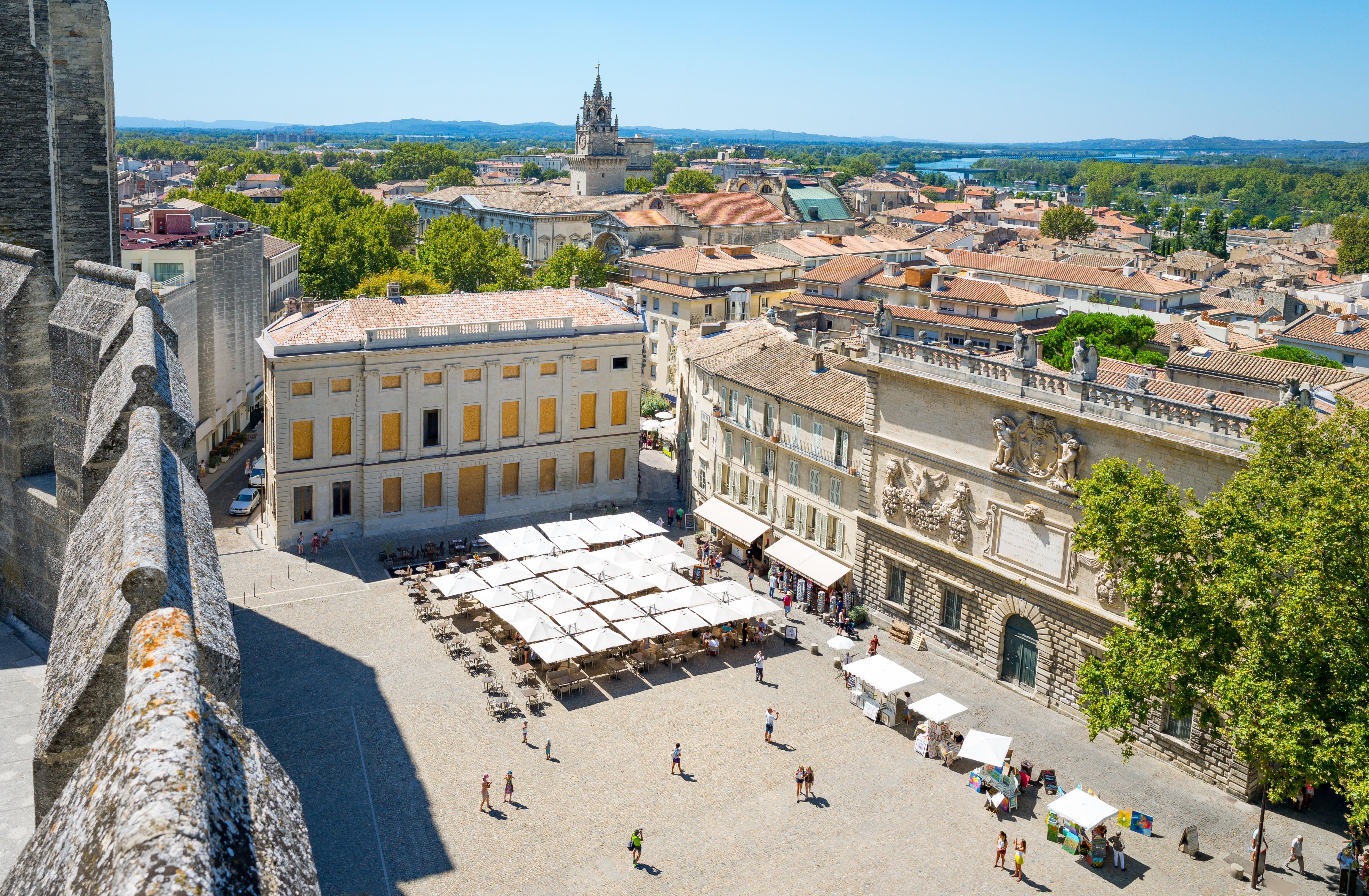 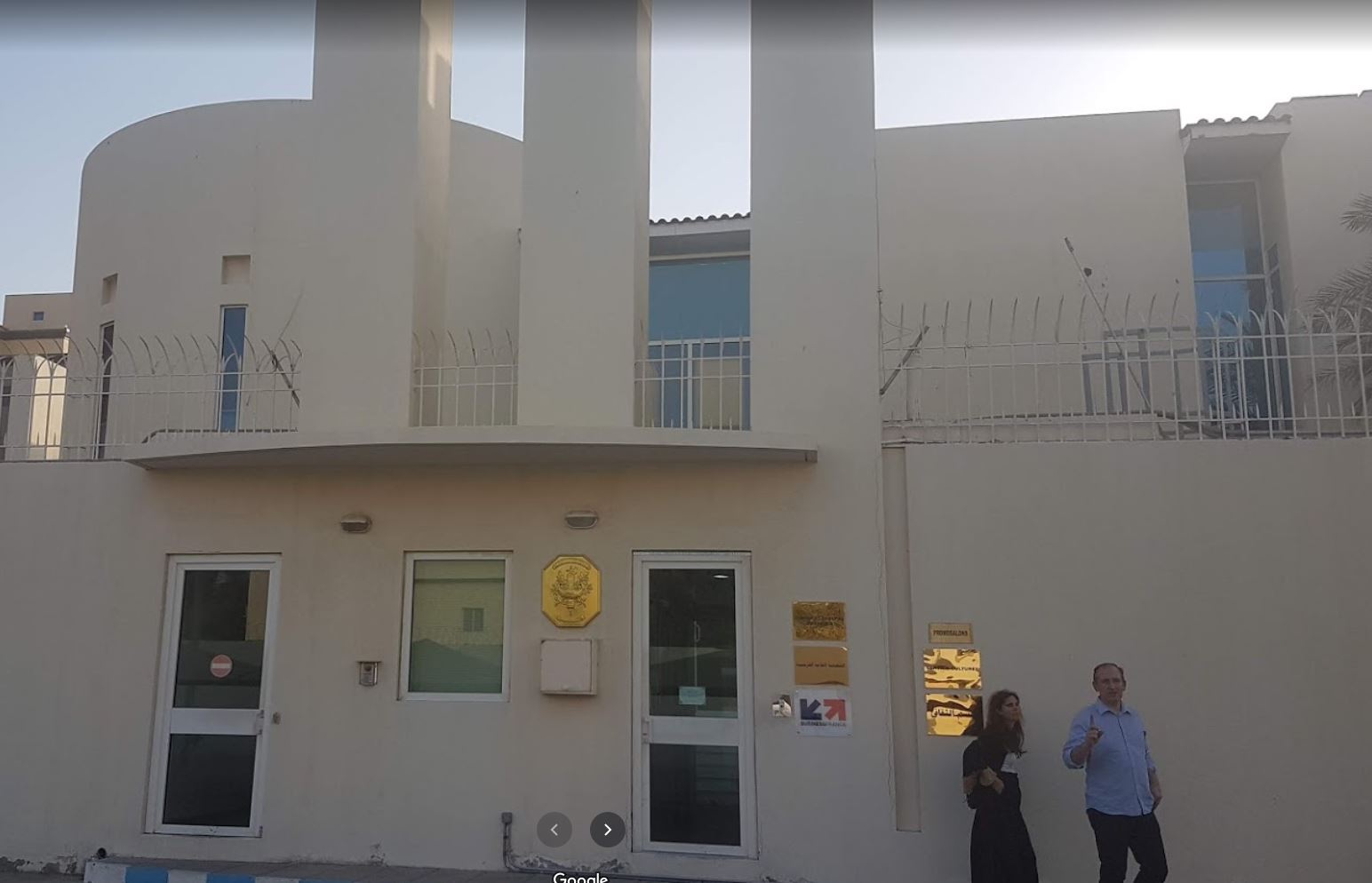 French radio station Europe1 reports that the Avignon suspect shouted "Allahu Akbar" before being fatally shot by French police officers at around 11.15am today in Montfavet, a district of the southeastern French city.

No other casualties were reported.

Meanwhile in Jeddah, the French embassy said the consulate was subject to "an attack by knife which targeted a guard", The Independent reports.

A statement from the embassy read: "The French embassy strongly condemns this attack against a diplomatic outpost which nothing could justify."

It comes just hours after an attack at the basilica in the Notre-Dame area of Nice left three people dead.

Two of the victims – a man and a woman – were reportedly decapitated inside the church.

It was widely reported in French media they were beheaded, and the city's mayor also confirmed the nature of the injuries, as well as police sources speaking to Reuters.

The third victim – a woman – reportedly managed to escape and took refuge in a nearby bar where she succumbed to her injuries, reports BFMTV.

Armed cops then stormed Notre-Dame – the largest Roman Catholic church in Nice – and shot the suspected terrorist, wounding him at around 9am local time.

Nice mayor Christian Estrosi said the attacker kept shouting "Allahu Akbar" even after he had been shot – and said it has all the hallmarks of a "terror attack".

What we know so far:

He said: "Enough is enough. It's time now for France to exonerate itself from the laws of peace in order to definitively wipe out Islamo-fascism from our territory."

It comes amid heightened security fears in France due to the ongoing row over cartoons of the Prophet Mohammed published by satirical magazine Charlie Hebdo.

Samuel Paty, 47, was beheaded by 18-year-old Abdullah Anzorov on October 17 after using the cartoons to teach his students about the importance of free speech.

Mayor Estrosi said the victims had been killed in a "horrible way" and added: "The methods match, without doubt, those used against the brave teacher".

He also called for churches around France to be given extra protection or closed as a precaution.

Meanwhile, almost simultaneously a security guard at the French Consulate in Jeddah was also stabbed and left with minor injuries.

And then a man shouting "Allahu Akbar" while brandishing a knife was shot dead 160 miles away in Avignon, according to police.

The latest attack on Nice also comes after 86 people were killed in the city when a terrorist rammed a 19-tonne cargo truck through crowds on Bastille Day in July 2016.

And the bloodshed in the church is a chilling echo of the murder of 85-year-old priest Jacques Hamel, who had his throat slit by two extremists at his church in Normandy that same month.

France is experiencing a new wave of terror attacks, and President Emmanuel Macron has pledged to take a tough line on Islamic extremism. 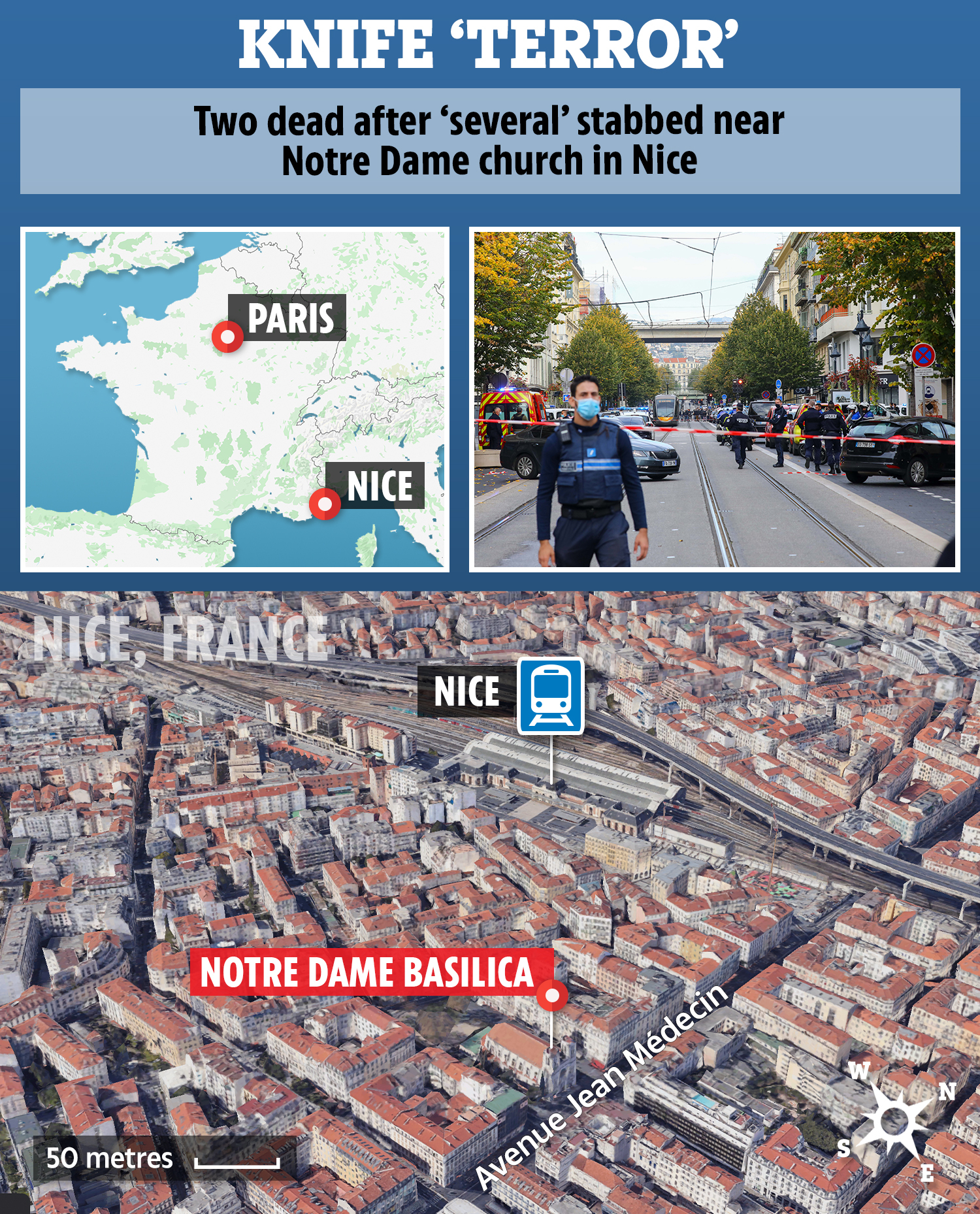 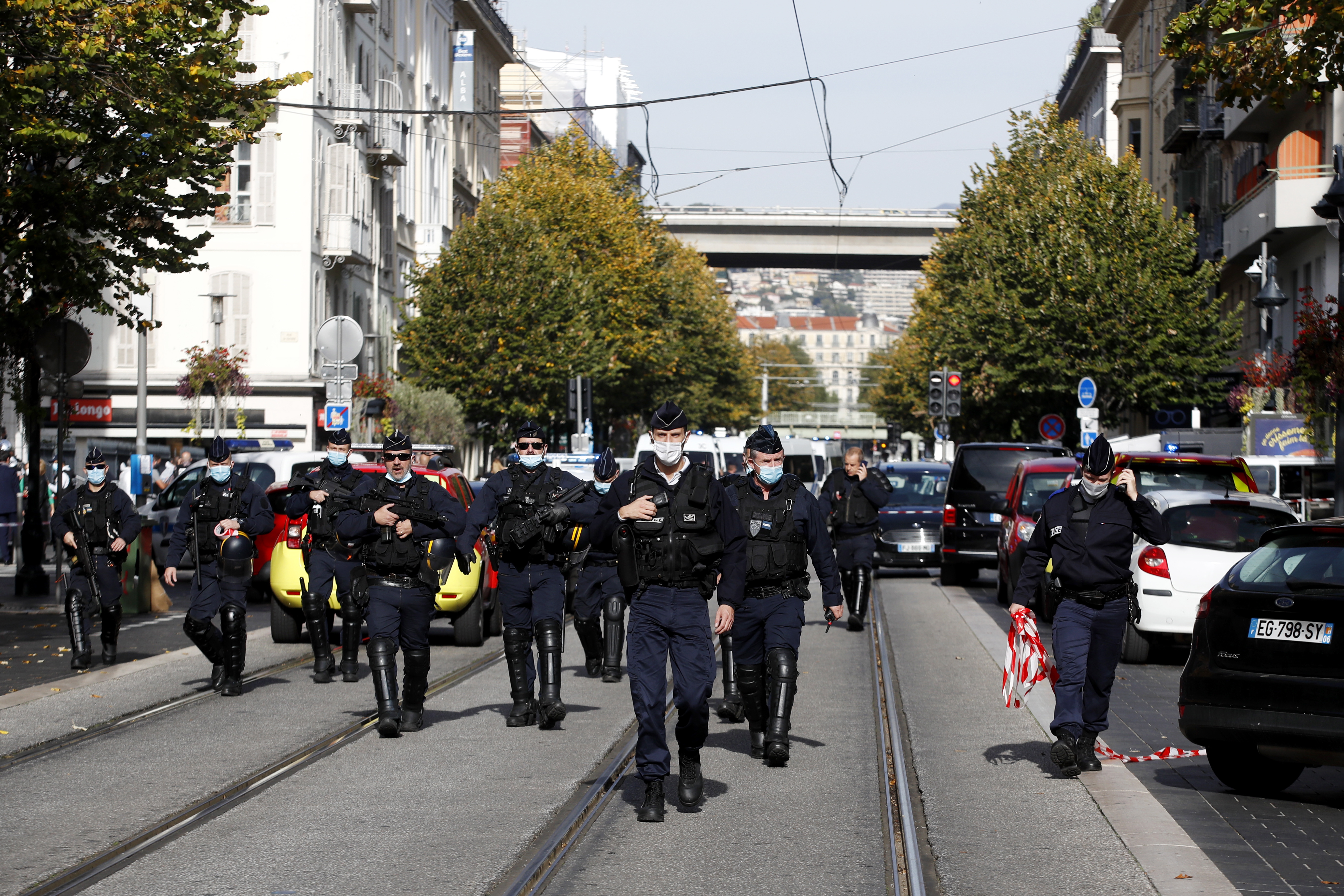 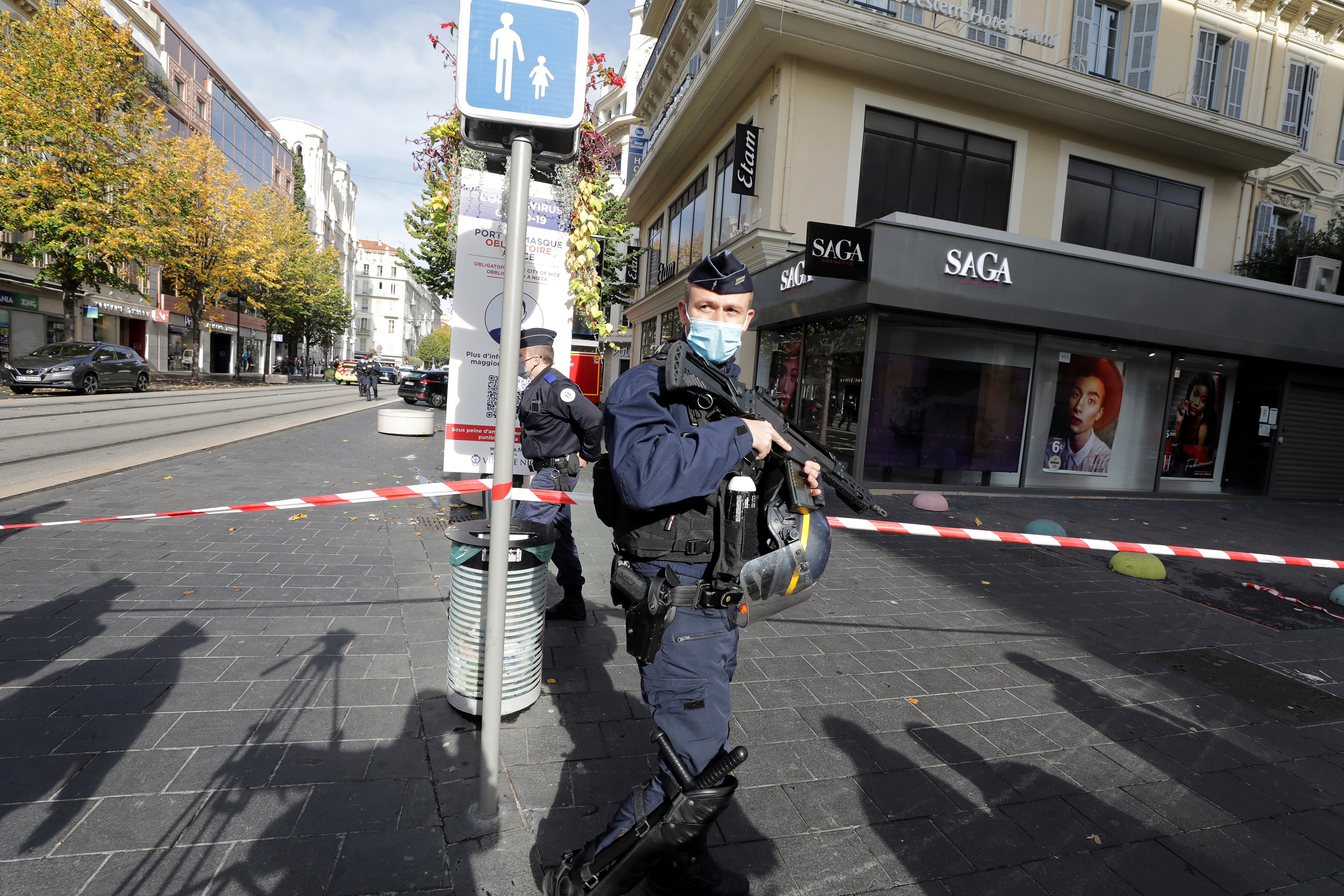 Pictures from the scene showed heavily armed cops from the tactical RAID unit storming the church and standing guard following the bloodshed.

Other images showed people weeping as France comes to terms with yet more terrorist violence.

Today's suspected terror attack is the third in little over a month.

Follows both the murder of Paty and the stabbing of two people outside the former offices of Charlie Hebdo in Paris.

Explosions were heard as the bomb squad detonated suspicious items found inside the church.

The French anti-terrorist prosecutor's department said it had been asked to investigate the attack. 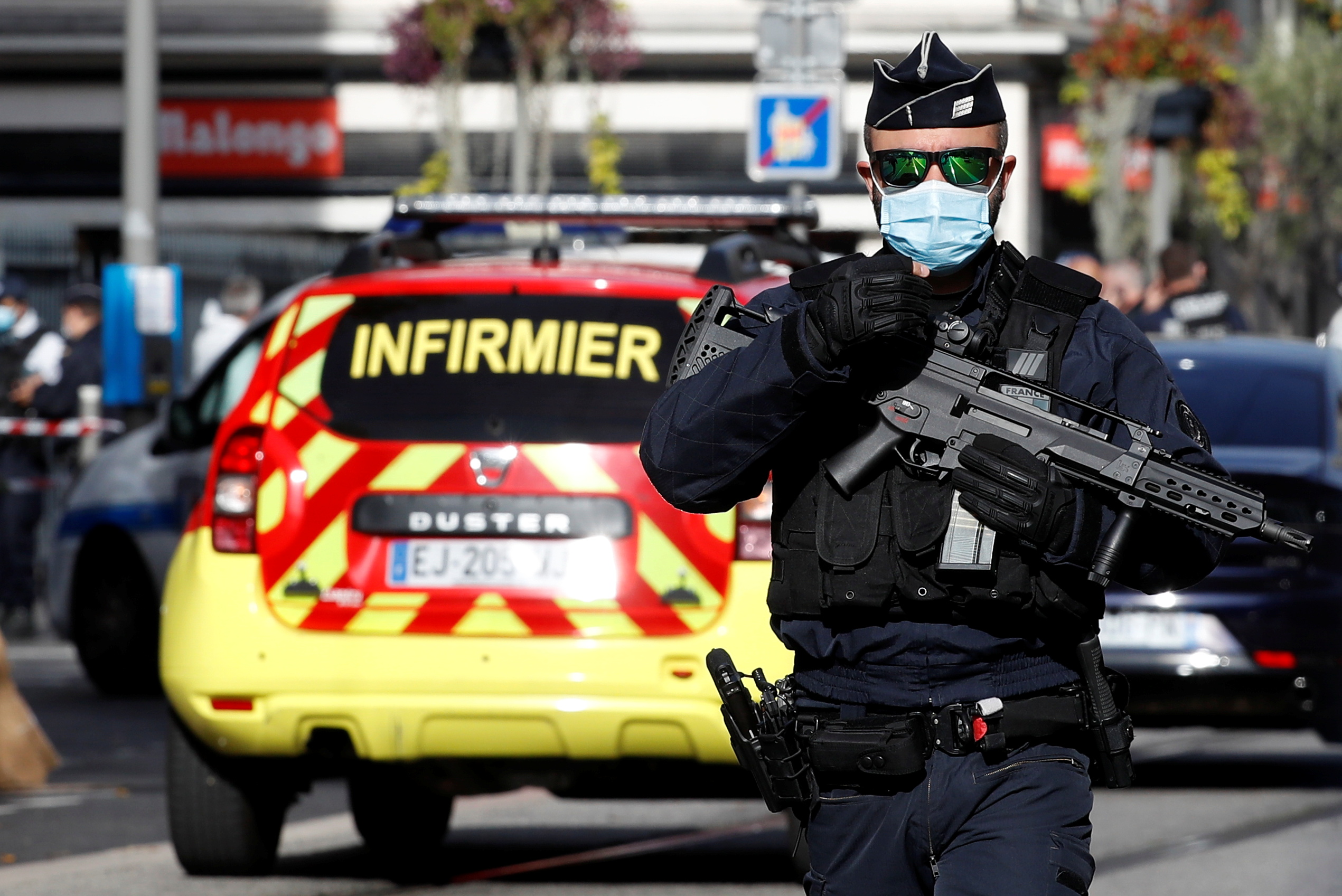 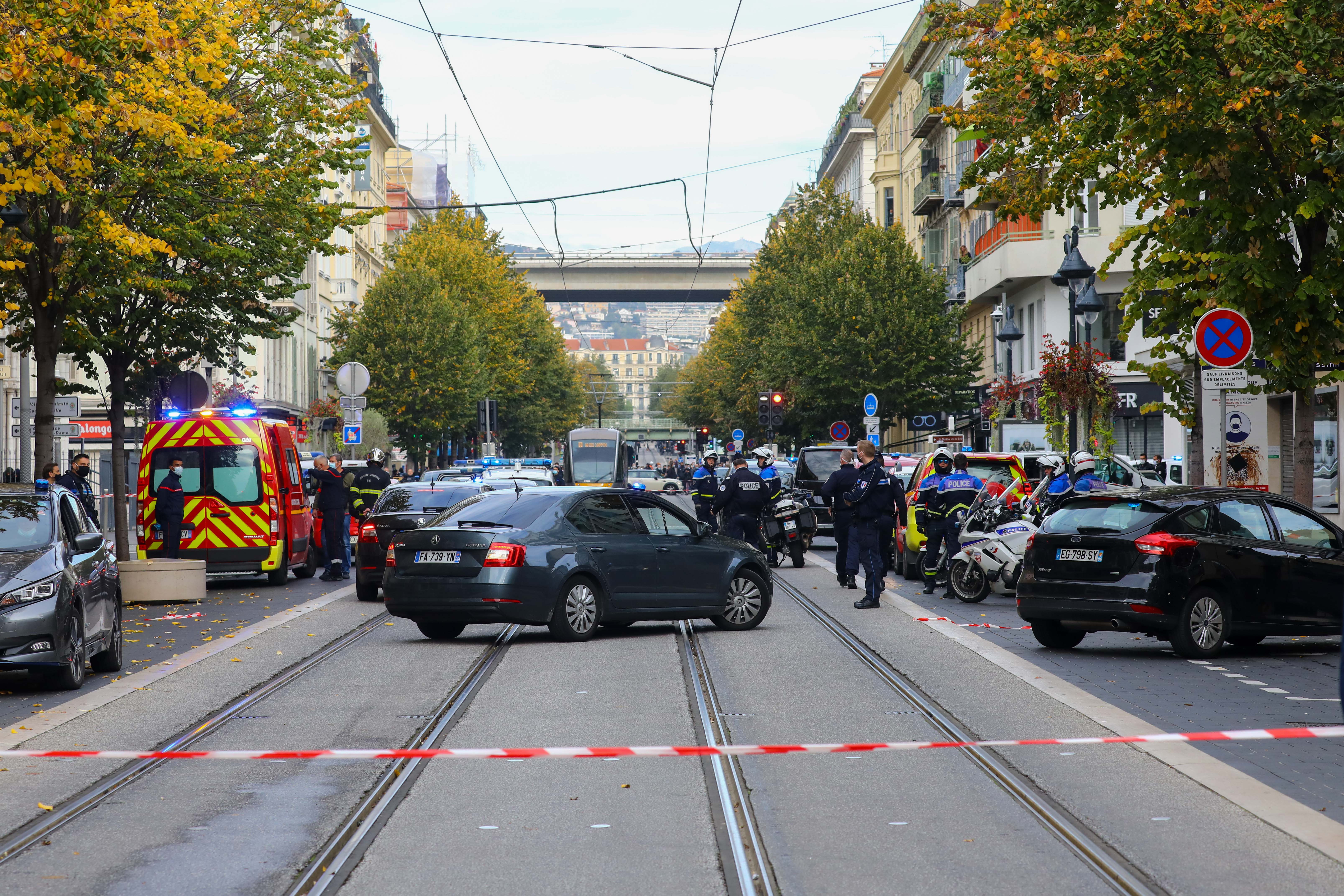 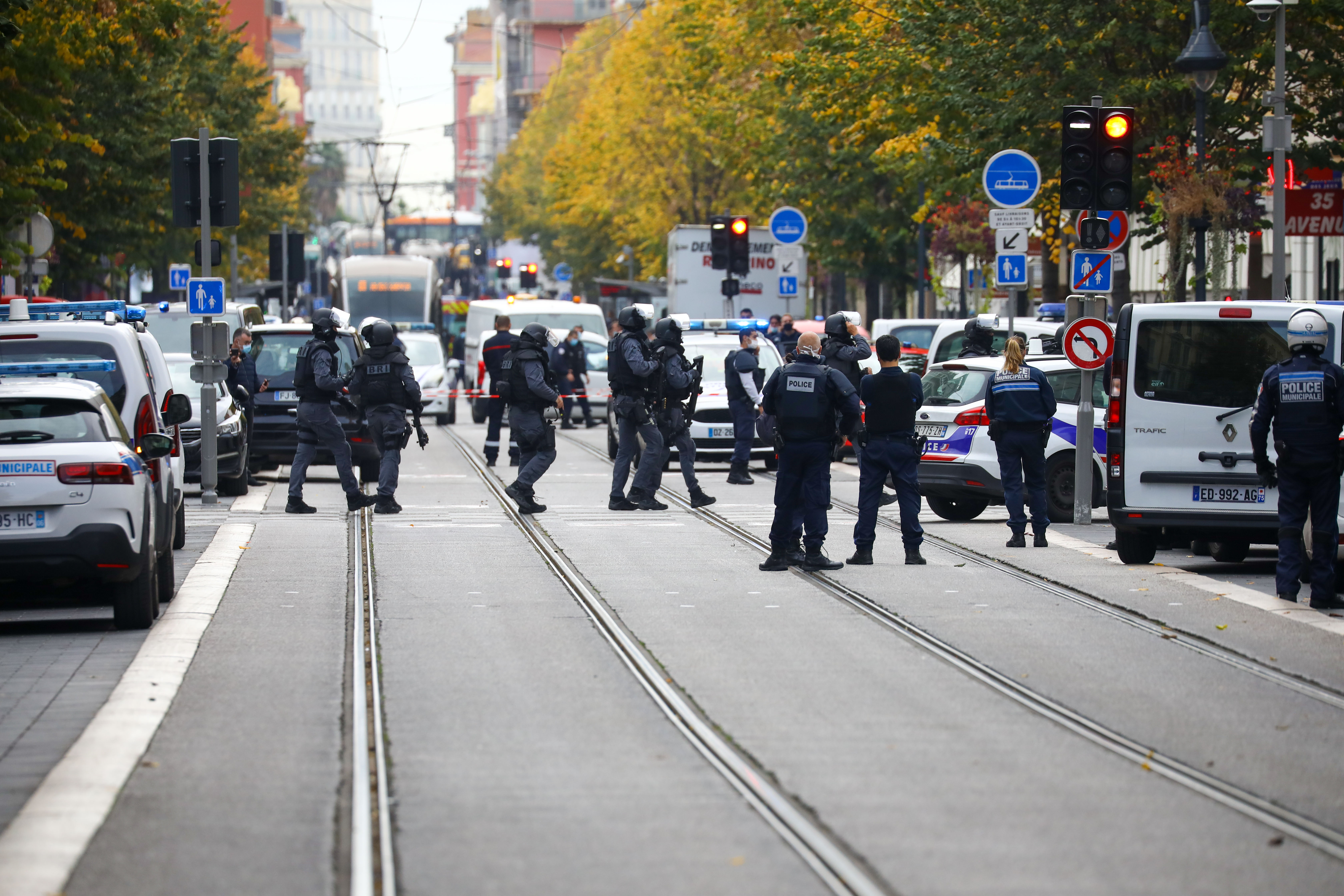 Macron is due to visit Nice as lawmakers in Paris at the National Assembly observed a minute's silence in solidarity with the victims.

A representative of the French Council for the Muslim Faith strongly condemned the attack.

In a statement, they said: "As a sign of mourning and solidarity with the victims and their loved ones, I call on all Muslims in France to cancel all the celebrations of the holiday of Mawlid.".

The holiday is the birthday of the Prophet Mohammad, which is being celebrated Thursday.

Italian Prime Minister Giuseppe Conte condemned the "vile attack"- and said it "will not shake the common front defending the values of freedom and peace."

He added: "Our convictions are stronger than fanaticism, hatred and terror." 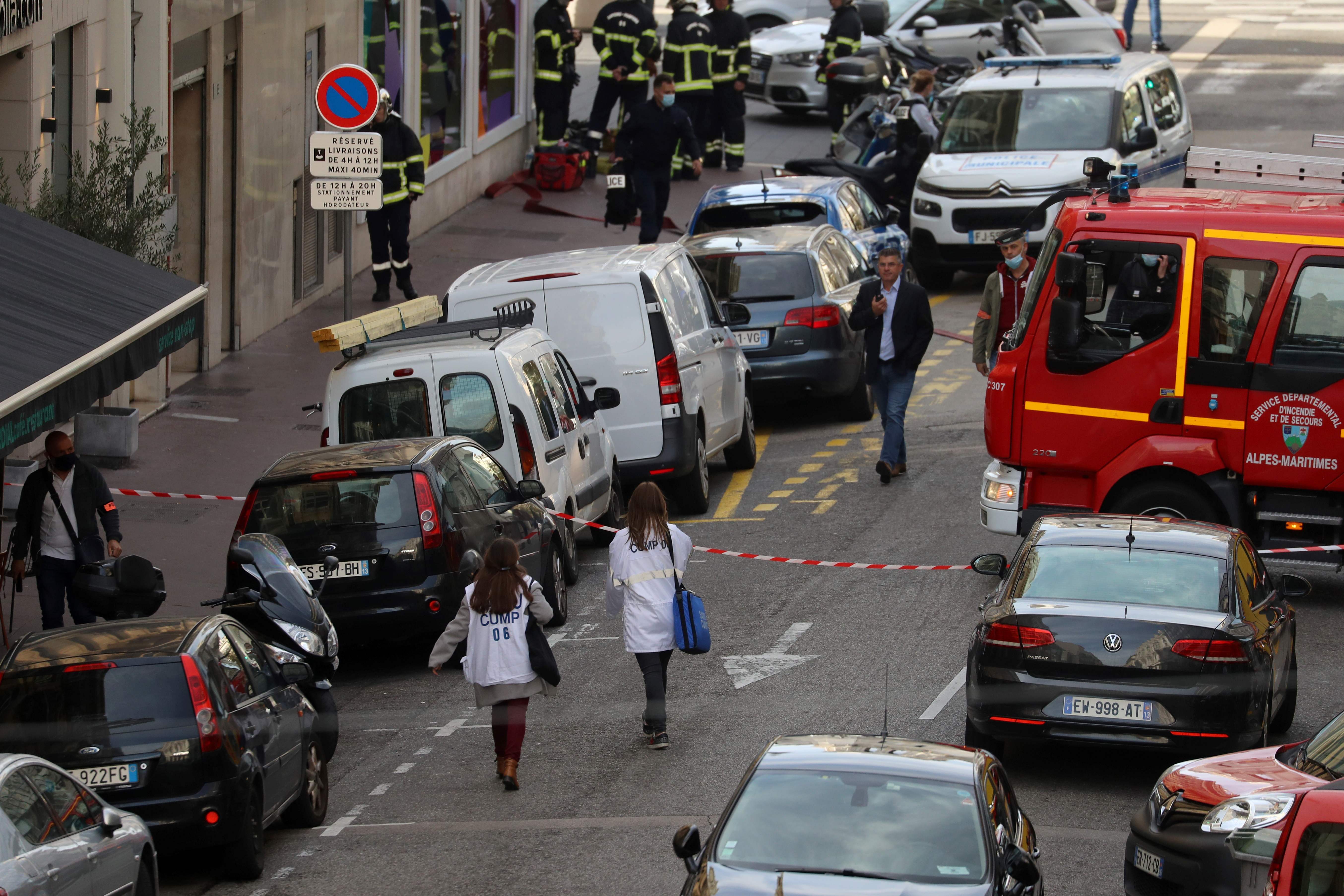 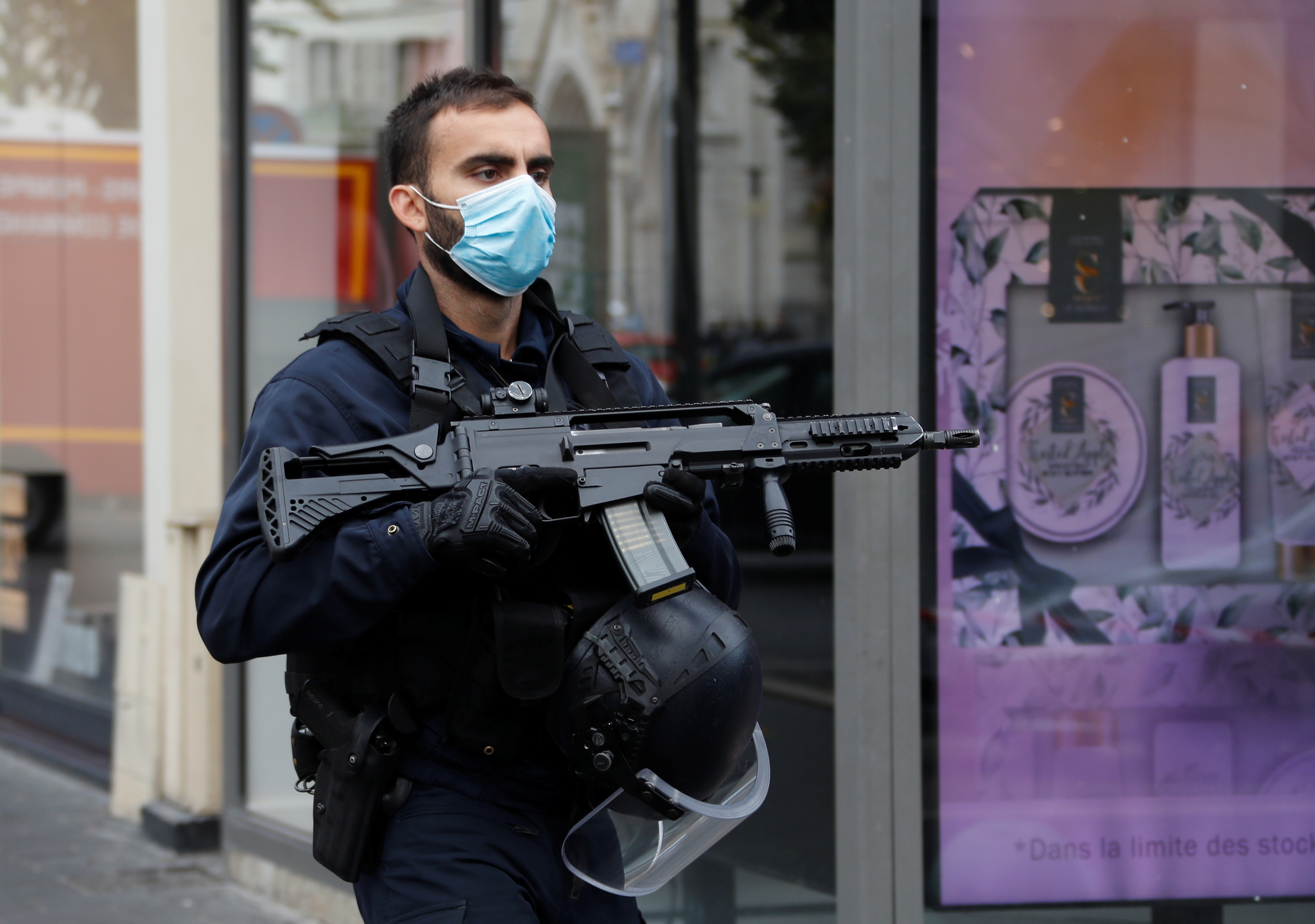 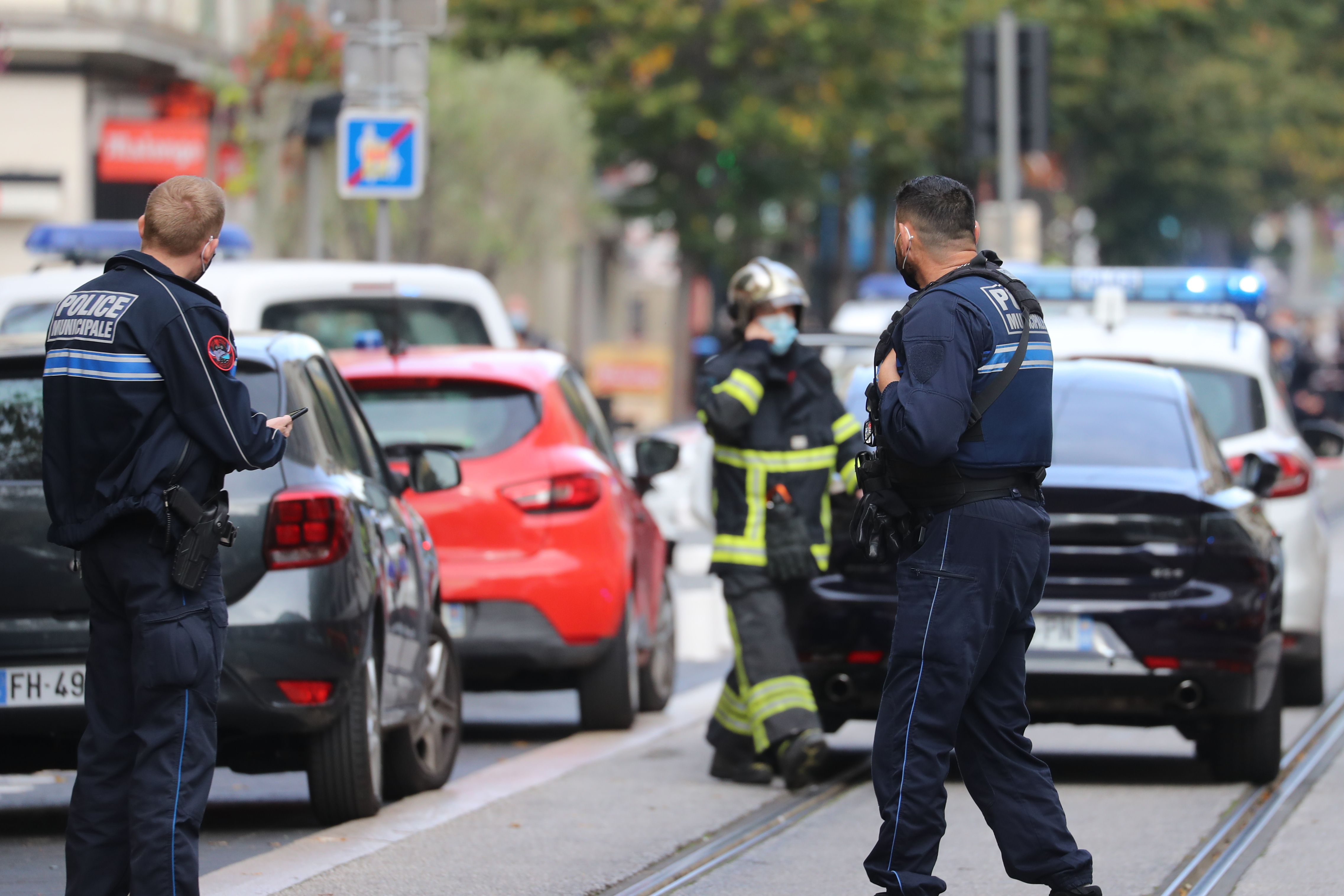 France has provoked the ire of Iran and Turkey as it has taken a tough line in defending the controversial cartoons of the Prophet Mohammed.

History teacher Paty was was posthumously given the Legion d'Honneur – France’s highest award – and French president Emmanuel Macron insisted the country would "not give up our cartoons".

Prophet Mohammed cartoons have been displayed in France in solidarity with Paty to defend what many in the country see as its values of free speech and secularism.

Macron has said he would redouble efforts to stop conservative Islamic beliefs subverting French values – which has angered many Muslims.

France has launched a crackdown on what it perceives to be radical Islam, announcing it has searched more than 120 homes and closed down a mosque in Pantin. 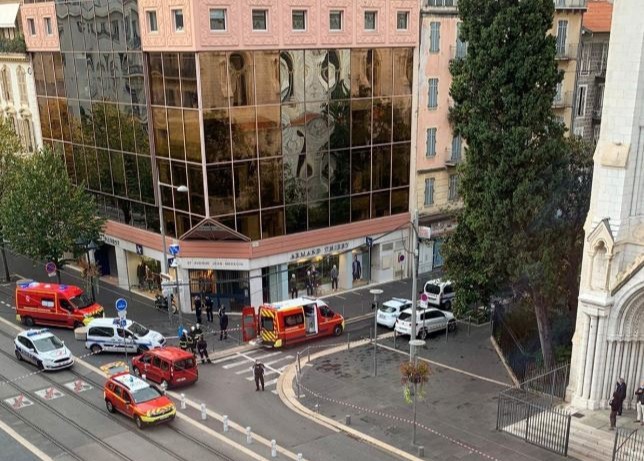 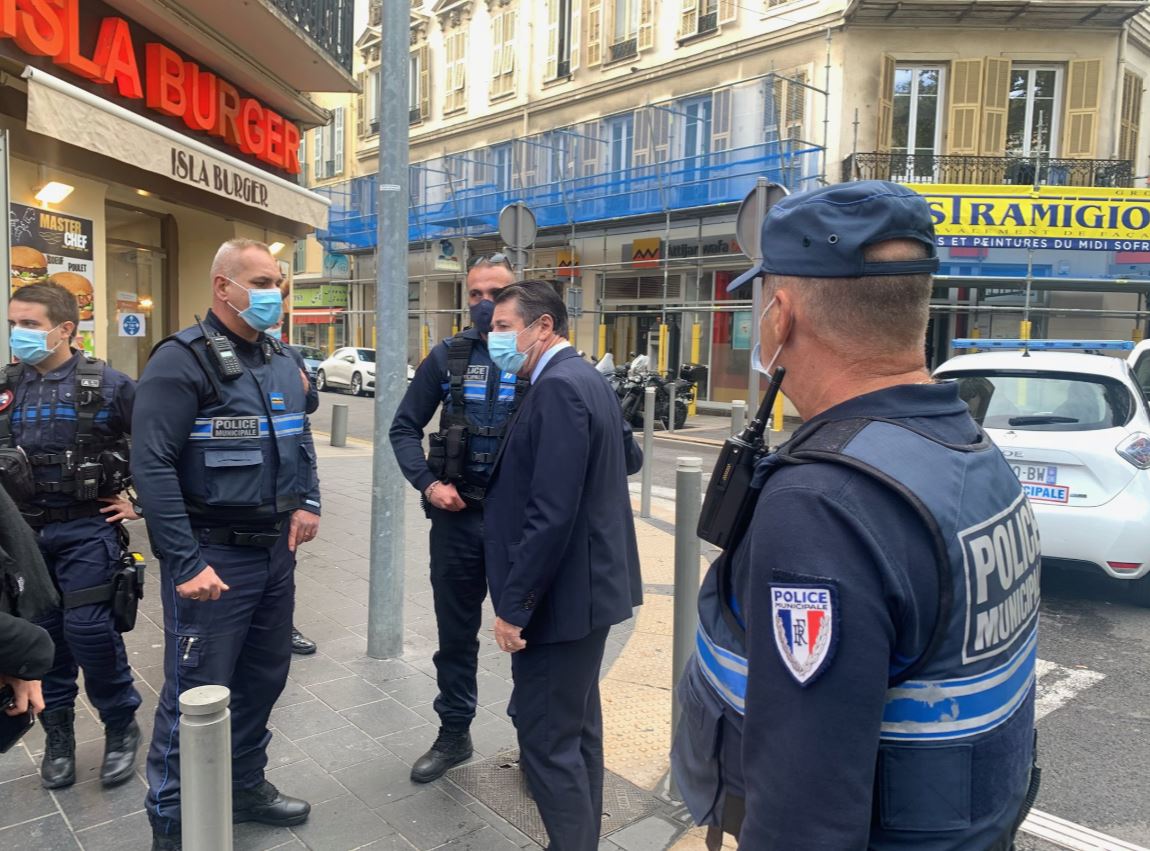 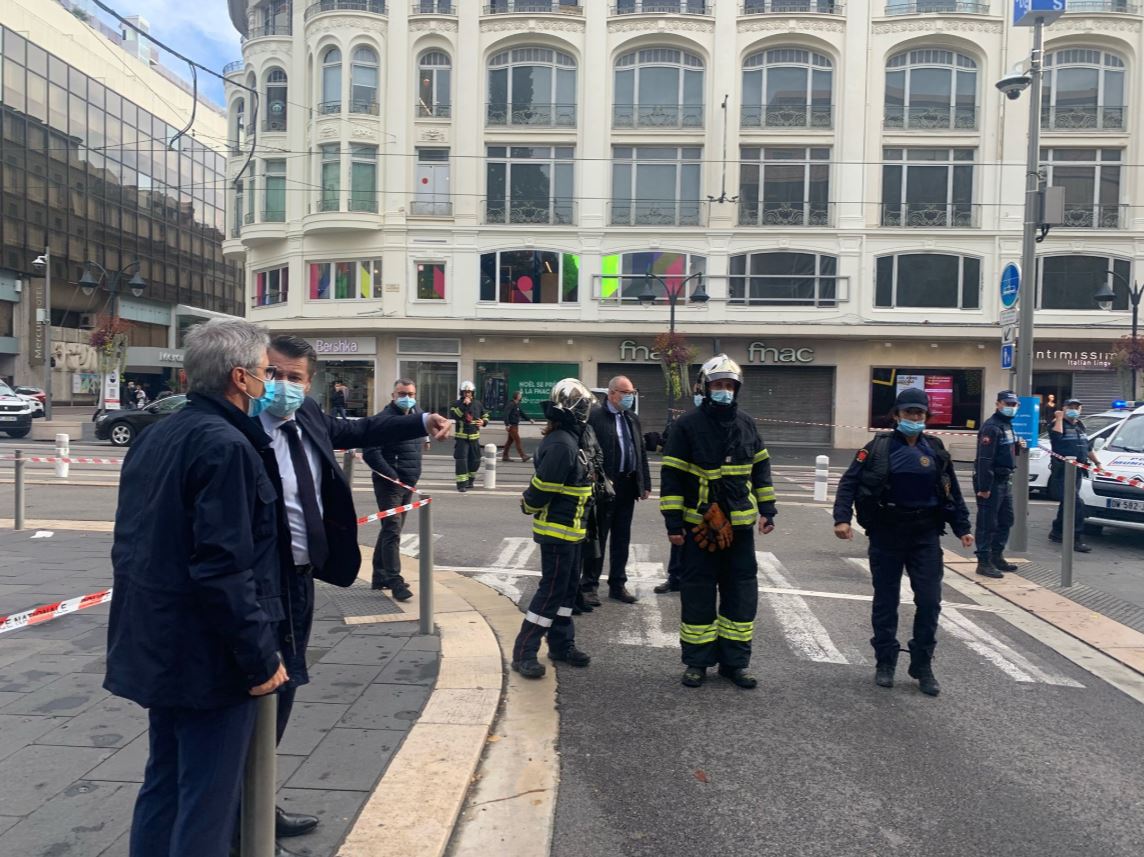 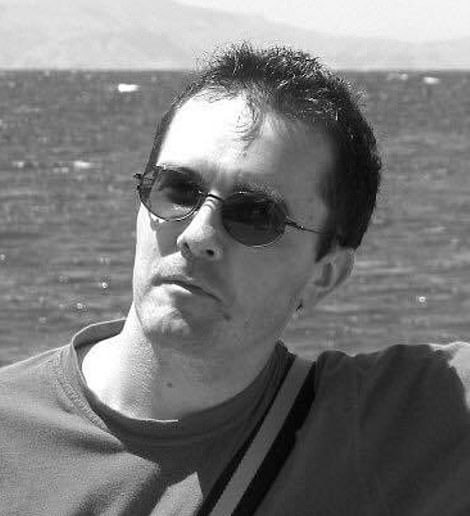 Paty, a history and geography teacher, is being seen as a champion of free speech by many in France after his brutal death.

The image he showed to students was the same one published by Charlie Hebdo that sparked the attack on the magazine's offices that killed 12.

Nine people – including members of the attacker's family – have been arrested over his death.

His killing came after another knife attack near the former offices of Charlie Hebdo just weeks prior – in which the suspect is believed to have tried to target the magazine.

Yesterday, Iranian president Hassan Rouhani warned the row over the cartoons could lead to "violence and bloodshed".

He said: "It's a surprise that this would come from those claiming culture and democracy, that they would somehow, even if unintentionally, encourage violence and bloodshed."

Rouhani added: "Westerners must understand the great Prophet of Islam is loved by all Muslims and freedom-lovers of the world.