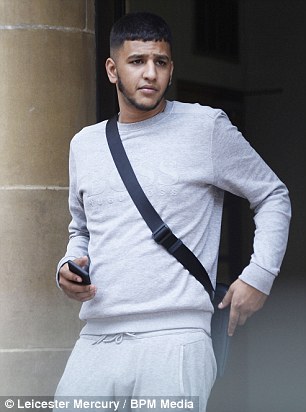 A show-off learner driver has been branded ‘stupid’ after he took two passengers on a dangerous 140mph police chase.

Hamza Pandor, 23, left police struggling to keep up as he blasted through the 50mph zone.

Holding just a provisional driving license his driving became increasingly reckless as he ‘wanted to show off in a fancy car’.

His actions eventually caught the eye of officers in an unmarked car.

They were overtaken by Pandor who was driving at a ‘very high speed’ on the M1 near Markfield, Leicestershire.

They quickly followed but Pandor put his foot down.

His actions eventually landed him in court.

Mark Van der Zwart, prosecuting at Leicester Crown Court on Monday, said: ‘Other officers were contacted to try and assist in bringing the situation to a stop.

‘The defendant went through a red traffic light but then he pulled over, shortly before a stinger was due to be activated.

‘His demeanour, when in the company of officers, was that he found the whole thing amusing.

‘He is a provisional licence holder.’ 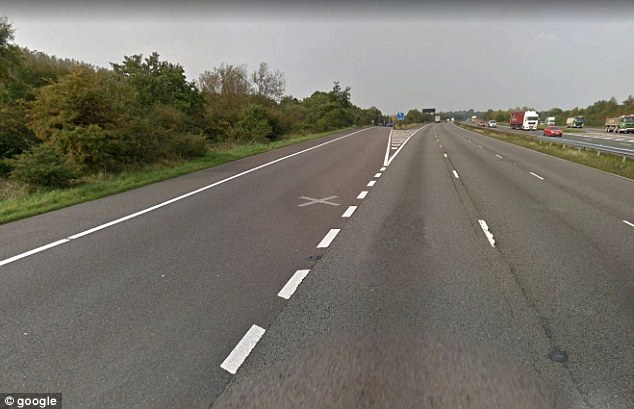 Pandor sped along roads including the M1 near Leicester. He left at junction 22 (pictured) and headed towards a 40mph zone on the A50. Here he reached speeds in excess of 100mph

Police had to reach speeds of 130mph in a bid to catch Pandor but he was still able to pull away.

Pandor then took officers on a tour of Leicestershire streets.

He left the M1 at junction 22 and proceeded along the A50 city-bound dual carriageway in excess of 100mph, in a 40mph zone, despite the blue flashing police lights.

After the Bradgate Quarry roundabout the Mercedes reached 140mph in a 50mph area – and when the police matched the speed they still weren’t able to keep up.

The 23-year-old pleaded guilty to dangerous driving on the M1 and A50 Glenfield Road, as well as having no insurance or licence, on Thursday, June 28.

The prosecutor told the court that the person who hired the Mercedes told the police he entrusted the defendant, his friend, with the key but did not intend he should drive the vehicle – and the first he knew of the dangerous driving was when officers informed him of what had happened.

Sentencing, Judge Ebraham Mooncey said: ‘Your driving on that night was shocking.

‘Speeds that don’t belong on the highway were being driven by you.

‘One wonders why cars driven on the highway have the capacity to do such speeds.

‘There’s no evidence that in that short piece of driving that other road users were affected in any way and it was in the early hours of the morning.

‘No-one was injured and there’s no evidence other car drivers had to move out of the way for you or anything of that nature.

‘But you were driving at huge speeds.

‘The maximum sentence for dangerous driving is still two years and it would usually have to involve other elements and not just speed – this was speed with none of the other features one commonly sees.

‘Custody is warranted, given the sheer speeds, and there has to be a deterrent element so others don’t decide to drive like that.

‘You’re very fortunate you’re not walking down the back stairs – into immediate custody – today.’

John Hallissey, mitigating, said: ‘He didn’t find it amusing afterwards, he told the officers ‘I knew the GTi behind me was a police car.’

‘There’s not a great deal I can say about the driving that would make it any better.

‘He genuinely regrets the way he behaved.

‘It’s not accepted a friend asked him to take (look after) the key; the person who hired the car allowed him to drive the car.

‘He shouldn’t have driven it, but he wanted to show off in a fancy car.

‘He was travelling north up the M1 to visit some family members.

‘He’s always been fond of cars and has always hoped to be able to drive legally.

‘It was nothing more significant that a young man being absolutely stupid and showing his mates that he could drive a nice car.

‘From overtaking the police, the journey lasted about seven miles in a matter of a few minutes.

‘There was a degree of bravado and the inevitable conclusion was he was showing off.

‘When he saw the blue police lights one of his passengers said they had some cannabis on them and he made a stupid decision in the heat of the moment to hit the accelerator rather than the brakes.

‘Once he realised the stupidity of what he was doing he stopped and pulled over onto the side of the road.

‘While his two passengers decamped, he sat in the driver’s seat where he was arrested.’

Mr Hallissey said Pandor previously dropped out of a mechanical engineering course, but had since worked as a taxi despatcher and been voluntarily helping at a shisha bar, but was due to begin an unpaid internship which may lead to full-time employment.

Pandor, of Spinney Hills, Leicester was given an eight month jail sentence, suspended for 20 months and was ordered to carry out 120 hours of unpaid work.

He was banned from driving for two years and will have to pay £650 court costs.