Like many older people Zygmunt Swistak has felt loneliness through months of lockdown, but what makes his experience that little bit harder is that English is not his first language.

As coronavirus restrictions have sparked a surge in virtual electronic communication globally, the 96-year-old has found connections through a relic of the past: the handwritten letter. 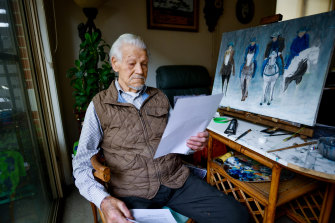 Through a program designed to connect elderly Victorians from culturally and linguistically diverse communities, Polish-born Mr Swistak has been trading letters with local children with the same heritage.

The letters to children aged between seven and 14 years are written in Polish and cover many topics, but mostly Mr Swistak answers their queries about life – such as whether it's OK as a little girl to slam a door on a family member.

''No, it's not nice to slam the door on anyone,'' he tells his young correspondent.

People do not prepare themselves for old age, it’s essential they become interested in something.

The intergenerational letter exchange program was launched by Australian Multicultural Community Services during the pandemic as a part of its Seniors Wisdom and the Mobile Information Hub project (SWAMIH).

Mr Swistak said the letters are one way – he also paints, writes poetry and composes music – to stay mentally healthy.

''People do not prepare themselves for old age, it’s essential they become interested in something. Some of those people don’t even know they have the ability or talent to do something, because they’ve never tried,'' he says.

The stay-at-home lockdown restrictions have exacerbated the loneliness for many elderly Victorians, particularly for those culturally and linguistically diverse (CALD).

At the age of 20, Mr Swistak moved to Australia in the wake of World War II having survived the Dachau concentration camp where he was imprisoned as a member of the Polish resistance. His father and brother were killed at the camp.

''I came to Australia and started to feel very lonely, I was told not to speak Polish, no one could understand me, so I had to learn English. I also wanted to belong to something,'' he says.

''Establishing a connection and belonging to the local cultural community is important for the wellbeing of seniors,'' she says.

The program connects seniors with children, mostly born in Australia, who are learning to speak their parents’ language. With more than 55 seniors and 66 volunteers, the program offers more than 10 languages, such as English, Polish, Arabic, Macedonian, Sri Lankan and Indonesian. 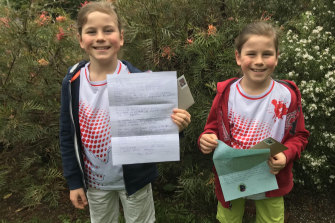 Deniz (Left) and Eren are sending letters in Polish to a local man who grew up in Poland.

''I think it’s beautiful. At the Polish school they learn about the culture, tradition and the language, and this is an additional experience for them.

''They started learning how to write a letter, how to address it, because these days it’s not something regular they learn at school,'' she says.

Deniz says the elderly have become more isolated during the pandemic and these letters are important to them.

''People can’t visit them that often, I know that the elderly people really need someone to talk to because they are alone,'' he says.

Eren says he was the first student to receive a letter back from one of the seniors.