A university student has told how she discovered a perverted housemate had been secretly filming her in the bathroom after finding his iPhone hidden inside a metal box.

Aubrey, which is not her real name, was left horrified when she found the Peeping Tom had been covertly recording her and others in the toilet at the property shared by 15 students.

The University of Lincoln undergraduate had become suspicious after noticing the container placed in the bathroom of their student digs had a tiny hole in the corner.

Video footage filmed by Aubrey shows the moment her and a pal broke open the box to find the mobile phone inside and a place mat reading ‘Keep Calm I’m A Student.’

The shocked pair then reported the matter to police and the creepy housemate was arrested and charged with voyeurism. 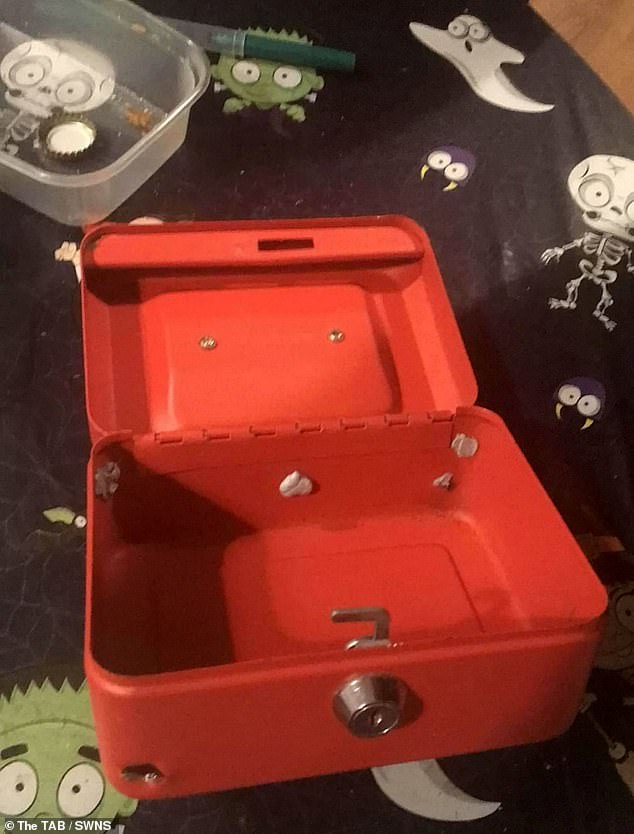 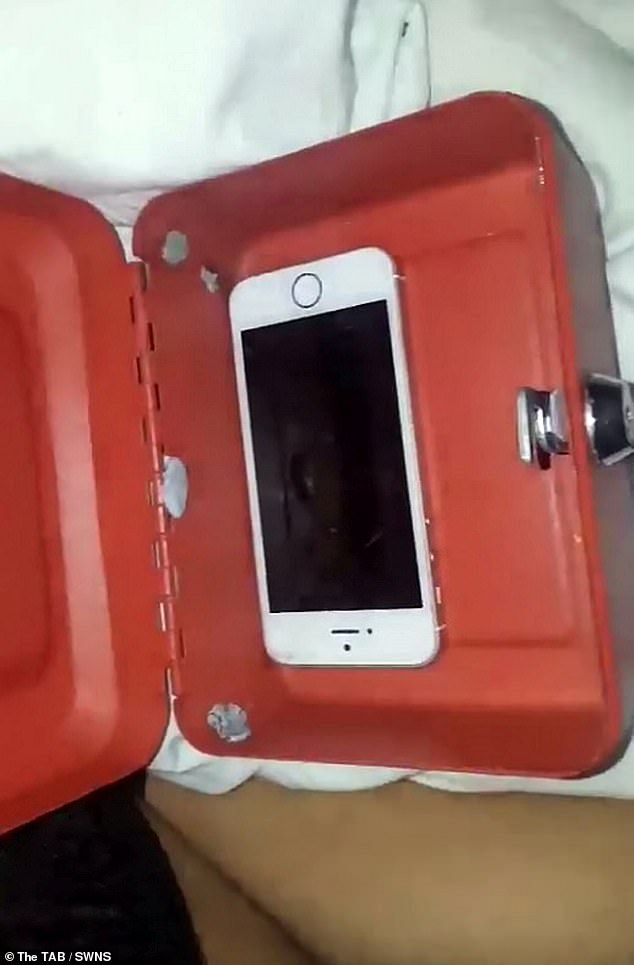 Female students living in the property took it upon themselves to investigate, and were left horrified after discovering a recording iPhone set up inside the box and held in place

The pervert, who Aubrey does not want to name in order ‘not to ruin his life’, pleaded guilty and was handed a six month prison sentence, suspended for two years.

He was also made to sign the Sex Offenders Register for over five years but was allowed to continue his studies at Lincoln remotely and off-campus.

Speaking to student news website The Tab, Aubrey said: ‘It all started when we were having pre-drinks in the house.

‘There was this pink locked box placed in the bathroom from the day we moved into the apartment together.

‘Everyone assumed it had utilities in it and thought nothing of it but I was always suspicious because it had a man-made tiny hole on one side of the box.

‘Whenever I went to the bathroom I would always turn it against the wall. It would always soon be turned back to the original position by someone else. 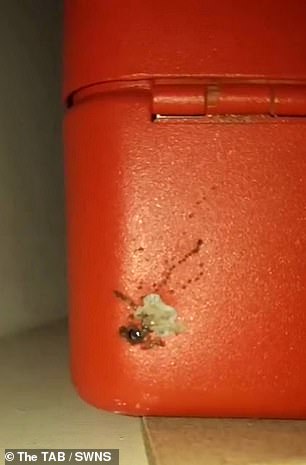 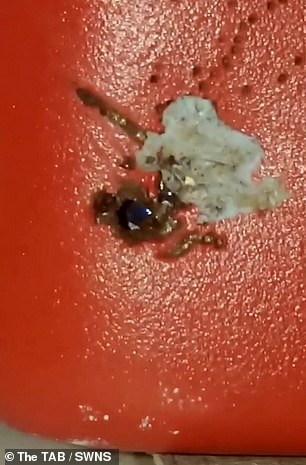 The corner of the red utility box appeared cracked and under further inspection had a man-made hole. It was only after the two girls shone a light into the opening that they realised the bright reflection meant a camera was hiding inside

‘Some of us were planning on going out one night but it got late so I stayed in. I went to the bathroom and I noticed the box had been moved on to the toilet.

‘I thought ‘that’s weird’ but picked up and moved it back. I went into my friend’s room I asked her if she thought the box was suspicious.

‘She said when she’s picked it up before something has rattled inside. We spoke about it and wondered what could be inside it.

‘She wondered if there could be a camera in there, but we brushed it off because it felt ridiculous.

‘Then we got really suspicious and like ‘what’s going on here?’ It was actually really scary. At that time, we didn’t know who it was.’

The pair did a bit of research online and read that if there was a camera inside the lens would reflect back at them if they shone a bright light.

Aubrey added: ‘Straight away, you could see there was a little camera in the hole.

‘We grabbed the box, took it into a bedroom and we sat there for a while trying to have a look in the little tiny hole to see what’s in there.

‘We could see there was a phone. We managed to get to the box by prying it open with a pair of scissors.’

They found an iPhone, as well as a place mat that read ‘Keep Calm I’m A Student’, which had been used to prop up the phone and blu tack it to the lid of the box. 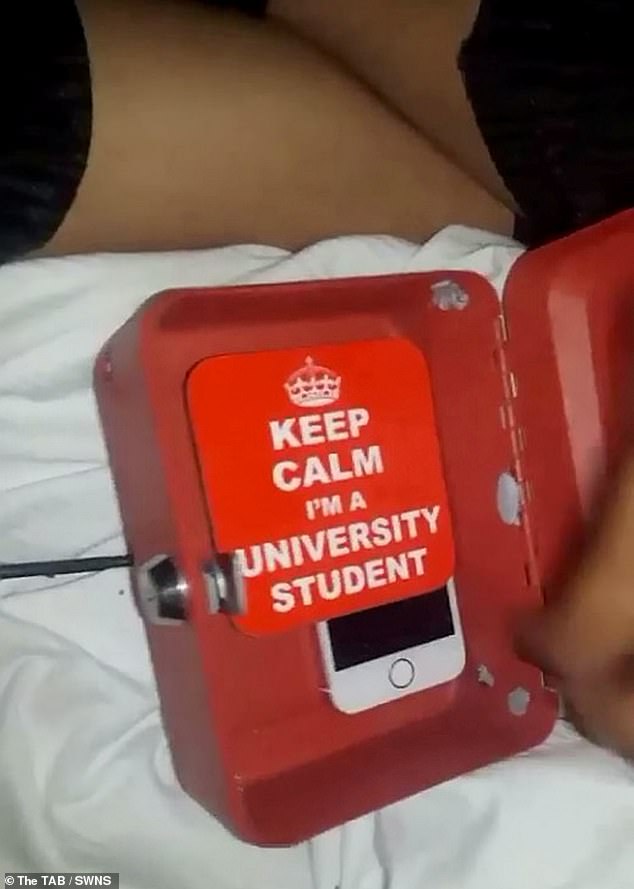 After prising open the box the students were horrified to discover the phone, which had been held into place using a ‘Keep Calm Im a University Student’ coffee mat and blu tack 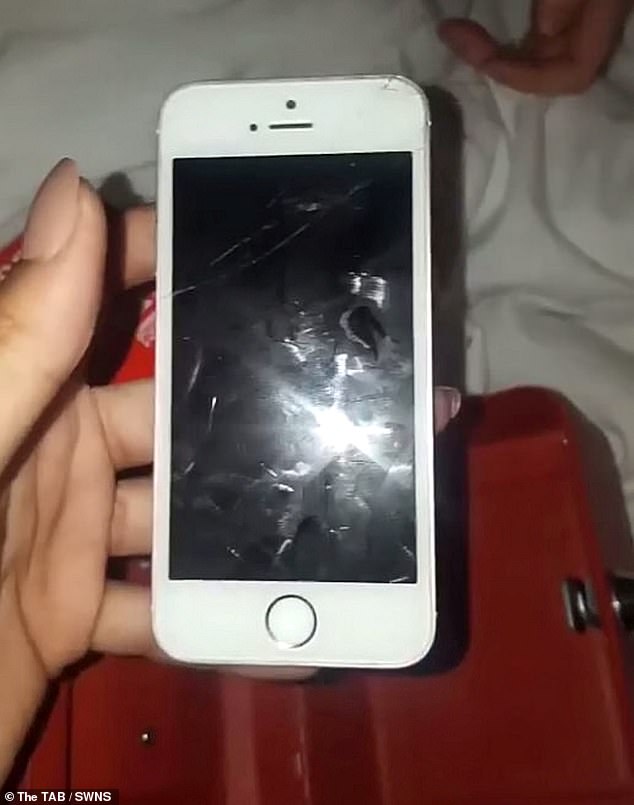 Evidential pictures were taken, as the suspect refused to give out the pass code for the phone. After changing his story he claimed the phone was in the box to amplify the sound of his music

Aubrey said: ‘I didn’t know whether this was some kind of joke. In the group chat we had, he asked where the little red box from the bathroom had gone. He said the box had his toothbrush and toothpaste in it.

‘He even said he would contact the police to report it stolen. He was just trying to find ways to make me give the phone back.

‘I went to the Student Union the next day and I asked them what they think I should do and they said I should go to the police, which is what I did afterwards.

‘I explained everything to them. The police told me that he willingly unlocked the phone and they found a video.

‘It was a video of myself and two other housemates in the toilet. The camera saw everything and it was so embarrassing. It was absolutely horrible.

‘I didn’t want to ruin his life but I want him to be aware that what he did was wrong. 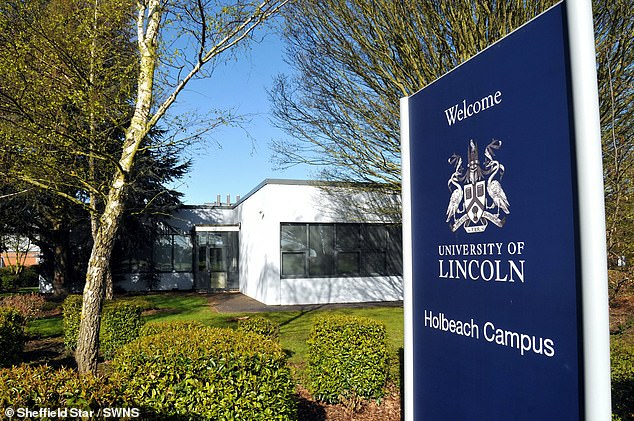 ‘I didn’t really know him that well. He’d spend a lot of his time upstairs playing video games with his friends. I didn’t really interact with him all that much.

‘He seemed pretty decent, I never had any problems with him. I think that’s the thing that’s most shocking is because you just didn’t expect it.’

A University of Lincoln spokesperson said: ‘We cannot comment on individual cases.

‘Any student who wishes to raise concerns about the conduct of another student or member of staff can do so in confidence by contacting our Student Support Centre. Confidential advice is also available through the Students’ Union.

‘The University has robust policies in place to deal with inappropriate behaviour including disciplinary action where appropriate.’