Washington: Democrats on Monday rushed to condemn Senator Lindsey Graham, after Georgia's Republican secretary of state said that he had pressured him to find ways to throw out mail-in ballots that helped swing the state in President-elect Joe Biden's favour.

"This is insane and illegal," Representative Ilhan Omar said in a tweet responding to a report on Georgia Secretary of State Brad Raffensperger's allegations.

Raffensperger said he was stunned on Friday when the South Carolina senator called him and asked several questions about signature matching, including whether the state's top election official could toss all of the mail-in ballots in counties with high rates of mismatched signatures. Graham, who serves as chairman of the Senate Judiciary Committee, dismissed the suggestion that he had acted inappropriately. 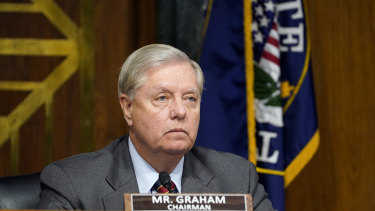 Senator Lindsey Graham, a Republican from South Carolina and chairman of the Senate Judiciary Committee, listens during a hearing in Washington, DC.Credit:AP

"That's just ridiculous," Graham told the Hill on Monday night. "If [Raffensperger] feels threatened by that conversation, he's got a problem. I actually thought it was a good conversation."

But the senator's defence held little water with Raffensperger, who doubled down on his claims in an interview with CNN on Monday. "It was just an implication of, 'Look hard and see how many ballots you could throw out,' " he said.

Graham's Democratic colleagues in Congress similarly did not accept his claims, calling his alleged actions "shameful," "despicable" and "a major scandal." Some called for the senator to resign. Others suggested the alleged pressure to toss legal ballots could be a crime. 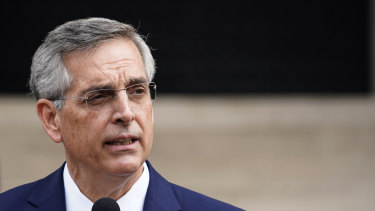 "Senator Graham pressuring the Ga. SoS to throw out legally cast ballots is morally reprehensible, and possibly a federal crime," Representative Kathleen Rice, a Democrat said in a tweet. "If true, he should resign from the Senate immediately."

At least one Democratic senator also said he was concerned by Raffensperger's account of the phone call.

"Senate Republicans shouldn't be applying pressure on election officials to overturn the will of the people," Senator Cory Booker, said in a tweet Monday. "This is deeply troubling and unacceptable. The voters chose @JoeBiden. This was a free and fair election. It's way past time for all of us to accept that and move on."

Other members of Congress pointed out perceived hypocrisy in the allegation that a sitting Republican had attempted to influence the election results after President Trump and his allies have spent weeks promoting unfounded claims of fraud.

"While Republicans publicly scream 'voter fraud' without evidence, this is what the Chair of the @senjudiciary is doing in private," Representative Mark Pocan, said in a tweet Monday. "Who's the fraud?"

Representative Steve Cohen praised Raffensperger for airing Graham's alleged comments, noting the secretary of state is administering a recount under pressure from his own party and while receiving death threats.

"I commend #Georgia Sec. of State Brad Raffensperger for doing his job & defending #democracy," Cohen said in a tweet. "A hero has been hard to find. Throughout this process he has received death threats & other vitriol."

Some government ethics experts also weighed in on the allegations. Walter M. Shaub jnr, who was director of the Office of Government Ethics until 2017, said even Graham's version of the phone conversation raised red flags.

"Why is the Chairman of the Senate Judiciary Committee calling Georgia's Secretary of State to discuss mechanics of an ongoing ballot count?" he said in a tweet Monday. "Such a call would be implicitly coercive in the best case, even without Graham's alleged suggestion about throwing out lawful votes."

Meanwhile, most Republicans remained silent on the allegations Monday night. Among the few who did mention the Georgia election, some attacked Raffensperger again.

Representative Jody Hice, questioned whether more mail-in ballots should have been disqualified and called for "accountability" for the secretary of state on Monday. His sentiments echoed calls from other Georgia Republicans who have demanded that Raffensperger resign after the state flipped for Biden in the presidential race and two Senate races ended with runoff elections set for January.

Raffensperger has said he will not resign, nor will he be influenced by those in his party who are not happy with the election results.

"I'm going to probably be disappointed because I was rooting for the Republicans to win, obviously," Raffensperger said Monday on CNN. "But I have a process, I have a law that I follow. Integrity, in this office, matters."