Sea weed: Looters are driven away by Spanish police helicopter as they try to snatch CANNABIS from drug smugglers’ boat which had run aground on a beach

Footage shows Spanish police raiding the beach and using a helicopter to drive off dozens of looters trying to snatch cannabis from a crashed drug traffickers’ boat.

The bizarre raid was filmed from a nearby rooftop in Sanlucar de Barrameda, Cadiz province, southern Spain, on 29th July, in the middle of a drugs bust.

Spanish customs officers had intercepted the crashed drug dealers’ boat after it was beached on the sand.

But when they tried to secure the crime scene, they were swamped by locals apparently trying to steal the stash. 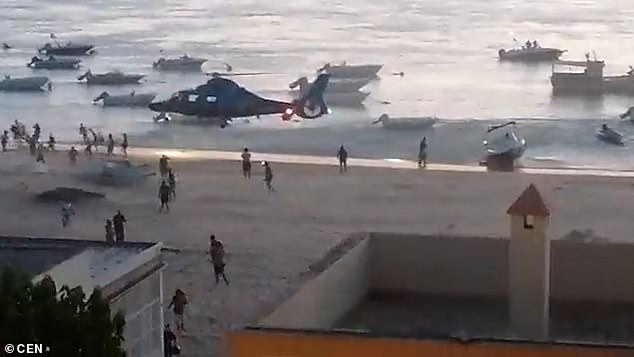 Drug dealers had crashed their boat into the sand and left in full of cannabis, but when police tried to secure the crime scene, they had to chase off locals making a dash for the boat to try and seize the stash 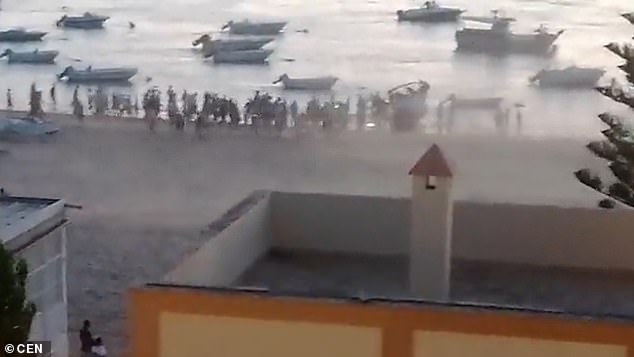 One person commented: ‘People who look like local residents or the general public, not traffickers, pounced on the drug bundles’

The video shows a customs helicopter flying almost at ground level to stop the thieves from making off with the drugs.

Even then, some still took a chance and sprinted under the helicopter to fill bags with the loot.

According to reports, the Spanish Customs Office requested the help of the Civil Guard and the National Police when its officers were overwhelmed by the looters.

The Spanish Customs Surveillance said in a statement on social media: ‘Congratulations to our colleagues, who after an anti-drug operation in Sanlucar and their decisive action, managed to intercept a cache of hashish after the boat carrying the drug ran aground on the beach.’

Netizen ‘Infierno civico’ commented: ‘The worrying thing is seeing how people who look like local residents or the general public, not traffickers, pounced on the drug bundles.’ 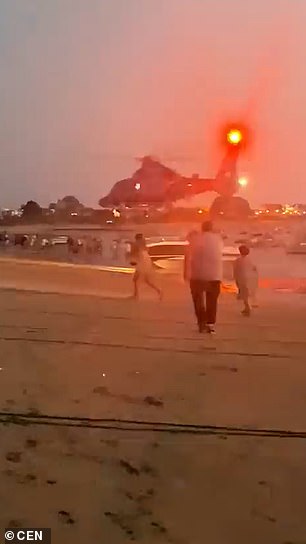 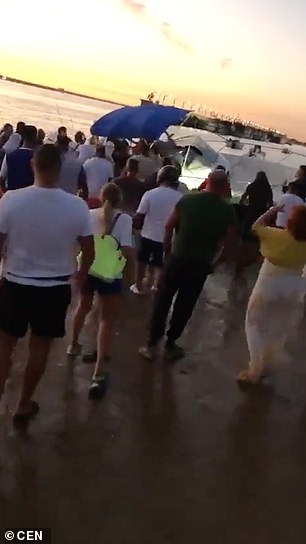 Customs helicopter flies low as a deterrent to scare away dozens of people trying to steal drugs seized by the police on a beach in Sanlucar de Barrameda,

And social media user ‘orlva’ replied: ‘That’s how it goes in this country, the majority want a life with lots of money but with the minimum effort. Ignoramuses!’

The Spanish National Police has confirmed that the operation in question is ongoing.

Cadiz province is said to be a drug-trafficking hotspot due to its proximity to the African continent.

The province lies just nine miles from Morocco at the Strait of Gibraltar’s narrowest point.