A man in his 20s is in a serious condition after he was shot in Broadmeadows on Saturday.

Police and paramedics were called to Camp Road at 1.55pm on Saturday after reports that a man had been shot in the leg. 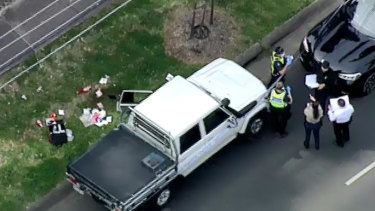 Police at the scene of the Broadmeadows shooting on Saturday. Credit:Nine News

The man in his 20s was taken to the Royal Melbourne Hospital with serious injuries.

A Victoria Police spokeswoman said “exact circumstances of the incident are unknown”, with an investigation by the Armed Crime Squad ongoing.

Investigators have set up a second crime scene at a nearby reserve, according to Nine News.

Anyone who witnessed the incident or with information is urged to contact Crime Stoppers on 1800 333 000 or make a confidential report at www.crimestoppersvic.com.au