A Greater Manchester Police officer has been sacked after a sexual encounter with a student cop in the station during a nightshift.

PC Christopher Armstrong admitted it had been wrong but insisted the incident with the probationer was ‘consensual’.

He was said to have been ‘pursuing’ the student officer. He allegedly drove to her home and ‘groped’ her before trying to have sex with her in a shower room after giving her a tour of Middleton police station.

The officer, who was sacked following a disciplinary hearing, is one of 158 serving GMP officers accused of sexual misconduct in the last five years. 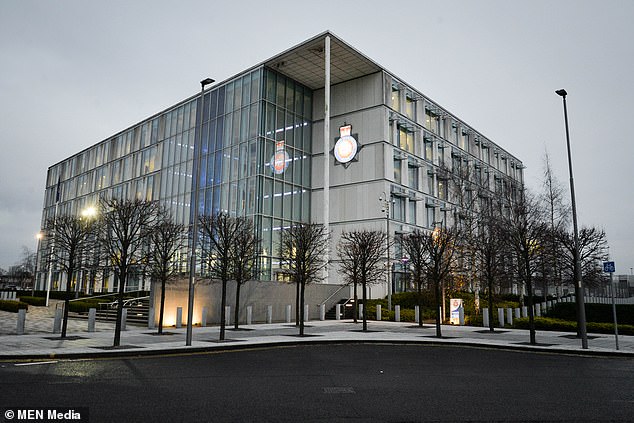 PC Armstrong had been on the force for 13 years when the incidents occurred with the student officer – known only as ‘Officer A’ – in August and September 2019.

The student officer said PC Armstrong drove to her home on August 18 2019, although she had no memory of giving him her address.

She said he had to force him away when he groped her bottom and tried to kiss her, according to a disciplinary panel ruling.

After the tour of Middleton Police Station, PC Armstrong was said to have taken her into a shower room where he locked the door and the pair engaged in ‘consensual’ kissing, the ruling said.

Officer A alleged that ‘further non-consensual and unwanted activity took place’, including that PC Armstrong removed her top and bra, groped her breasts, unzipped her jeans and then lay on top of her ‘grinding backwards and forwards’.

The junior officer admitted ‘straddling’ PC Armstong as he sat in a chair and removing some of her clothes.

The woman said she pushed the officer’s hand away and told him ‘don’t do that’, and PC Armstrong put his clothes on and left.

PC Armstrong admitted ‘sexual contact’ with Officer A at the station but insisted it was entirely consensual.

His accuser took sick leave and was later diagnosed with anxiety and depression, according to the judgement.

The pair got to know each other after PC Armstrong sent Officer A a Facebook message, and their conversation became ‘flirtatious and sexual’ and some ‘intimate’ images were exchanged.

The panel accepted there was ‘mutual attraction’ between the pair.

The female officer ‘went along with some of the things’ that happened in the shower, the panel said, as she did not want a repeat of comments that she was ‘cold or closed off’, according to the panel.

She admitted she sent three intimate images of herself to PC Armstong and although she was happy to do so at the time, she later came to the view that ‘it was a mistake’. 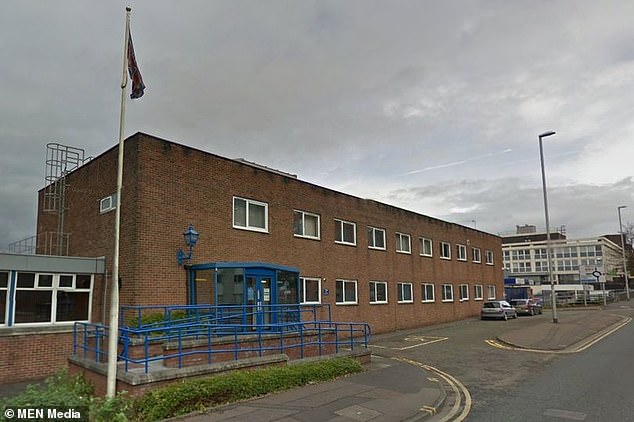 The panel found Officer A’s account had ‘flaws and weaknesses’ and said she was ‘not an entirely reliable historian’.

They also questioned the ‘accuracy’ of PC Armstrong’s evidence, which was sometimes ‘implausible’.

PC Armstrong said Officer A told him where she lived three days after an intimate picture had been sent to him and before his visit on August 18 2019.

She said she repeatedly screamed at him to ‘get off’ but PC Armstrong denied he had tried to deliberately grab her bottom.

He conceded he may have ‘accidentally brushed’ her rear as the pair embraced and said he was ‘startled’ by her reaction and let go of her immediately.

The disciplinary panel found the hug had been ‘forceful’ although the pair resumed the flirtatious messaging.

The next time the pair met was at the nightshift at Middleton police station on September 15, 2019, where PC Armstrong was on a night shift and the woman officer was working on her diploma portfolio.

PC Armstrong told the hearing: ‘We went inside the shower room and continued talking. Very quickly we started to kiss. PC A placed herself on top of me and was straddling me.

‘I remember her saying her jeans were too tight and that she should have worn her jogging bottoms as they would have been easier to take off. I do not accept that I removed PC A’s top and bra and groped her breasts. I recall PC A asking me to assist in pulling her top off, which I did.

‘I cannot recall the exact order of events, but I do recall we were kissing and she started to pull at her top which I then assisted in taking off.’

He added he ‘immediately stopped’ when she said she did not feel comfortable and she put her clothes back on.

He said that later ‘somehow’ the pair ended up on the floor.

He said: ‘This was all consensual and PC A did not ask me to stop,’ he said, accepting that he started ‘rubbing’ between her legs. He said he again stopped when she asked him.

He said: ‘PC A did not appear to be upset and we left on good terms.’

PC Armstrong admitted he was wrong to behave in this way on duty but said no emergency calls came through during the incident.

The panel found both officers went into the shower room ‘for sexual purposes’ but that PC Amstrong had gone ‘beyond’ what PC A was comfortable with.

The pair met two days later in Tandle Hill Park but the junior officer said she could not recall whether they had kissed, as he had claimed.

The panel said: ‘He neglected his duties. He did so for sexual purposes. The fact that he might have responded to emergencies misses the point; being merely available is not what is expected of police officers.

‘Police officers patrolling is a benefit to the public. The removal of that benefit is a detriment.

‘The panel also find that there was premeditation and planning to this breach. The plan to meet involved at least contemplated sexual activity on duty in a police station, even if the details were to be resolved when the circumstances were clearer.’

The panel criticised a ‘serious breach of trust’ and said PC Armstrong ‘must have realised that there was at least a chance that the level and speed of sexual contact would have surprised and upset Officer A.’

‘Doing so for sexual purposes is worse, doing so with a degree of planning, and while committing a separate breach of standards with regard to respect for another officer is worse still and makes this a case where only dismissal without notice can be justified.’

A spokeswoman for GMP confirmed no action was taken against Officer A and that she remains with the force.