Grading of A-level and GCSE papers will be especially lenient this year to compensate for teething problems with the new exams.

Exam regulator Ofqual has said the marks needed for a pass will be set so no one is ‘disadvantaged’ by the changes.

It said grade boundaries – set after marking – will be positioned so roughly the same proportion of pupils will get good grades as in previous years.

This could potentially mean placing boundaries lower to compensate for poorer performance caused by teachers unfamiliar with the materials. 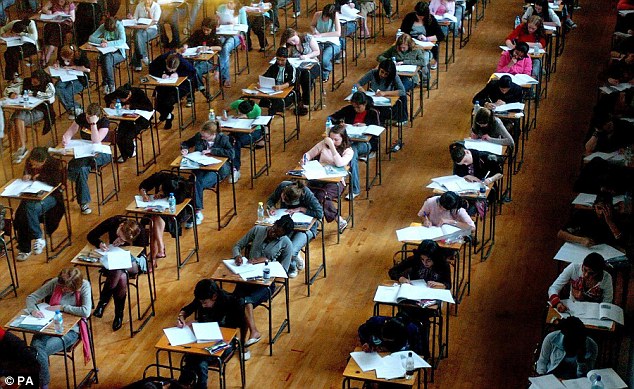 This year new A-levels and GCSEs have been sat by hundreds of thousands of pupils who will be acting as ‘guinea pigs’ following radical reforms to toughen up exams.

The changes were brought in by former education secretary Michael Gove following concerns over years of slipping standards under New Labour.

The new exams aim to bring performance in line with that of high-flying countries in Asia which are far ahead of the UK in many international league tables.

Yesterday critics warned that if the leniency continues there will have been little point in making the exams harder.

Alan Smithers, professor of education at the University of Buckingham, said: ‘It’s reasonable to recognise that the first people to take these exams will be guinea pigs and should get protection.

‘But while it is reasonable to provide these protections for pupils for the moment, I would question how long they will be in place… if they continue indefinitely, we will not get the full benefit of the reforms.’

The GCSEs will also be graded on a new scale, from 1 to 9, with the 9 equivalent to a high A*. Cath Jadhav, a director of standards at Ofqual, revealed its grading strategy for this year in a series of blog posts.

She said: ‘Student performance dips a little in the first years of a new qualification, because teachers are less familiar with the new specifications, and there are fewer support materials and past papers for students to use.

‘Using statistics compensates for that dip, so that the 2018 cohort is not unfairly disadvantaged by being the first to sit these new qualifications.’

She said the results of the new A-levels will ‘look similar’ to last year, providing only that the ‘ability make-up’ of pupils has not changed.

This means a similar proportion of entries – 26 per cent – will get an A or A*, while three quarters will be graded C or above.

At GCSE the proportion of entries previously getting a C or above – two thirds – will be graded 4 or above this year.

The bottom of grade 7 is equivalent to the bottom of the old A, and as before, 20 per cent should achieve this or above. Within this sub-group around 20 per cent again will get the top grade of 9.

This means the 9 grade – which Oxford and Cambridge will use to identify the very brightest pupils – will be much harder to get than the old A*.

However, some teachers are still worried the volatility of the reforms could mean pupils miss out on the results they deserve.

The changes were brought in partly because leading universities had complained pupils were arriving poorly prepared for the demands of degrees.

They also said they found it difficult to choose between thousands of applicants who had achieved straight As and A*s at GCSE and were predicted top grades at A-level as well.

A-level results come out on Thursday and GCSE results are out on August 23.