That’s nuts! Martial artist cracks 247 walnuts open with his HEAD in an attempt to break a bizarre world record

A Pakistani man cracked open 247 walnuts with his head in just one minute in a bizarre world record attempt. 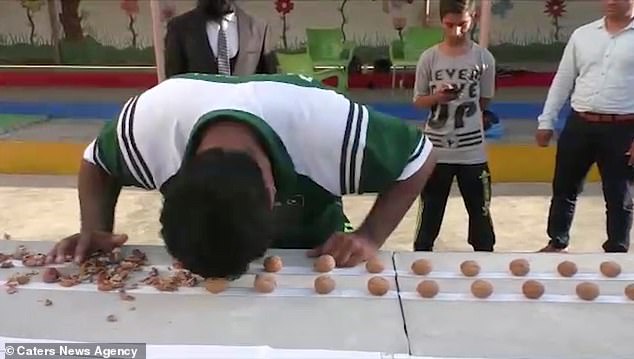 Mohammad Rashid Naseem, 32, smashes open 247 walnuts with his head in just one minute

Blood can be seen oozing out of Mr Naseem’s head during the attempt – but that didn’t stop the trained martial artist from smashing the previous record of 217.

Mr Naseem said: ‘My aim is to make 50 world records.

‘I’m training very hard and whenever I set up a new record, it gives me a lot of happiness.’

The Guinness World Record for most walnuts cracked against the head in one minute was previously 217, achieved by India’s Navin Kumar in November last year.

Footage shows a long line of walnuts ready for the world record attempt, before Mr Naseem methodically destroys each one.

Just 20 seconds into the daring task the martial artist begins bleeding – blood splattering onto the table as he powers through with his challenge. 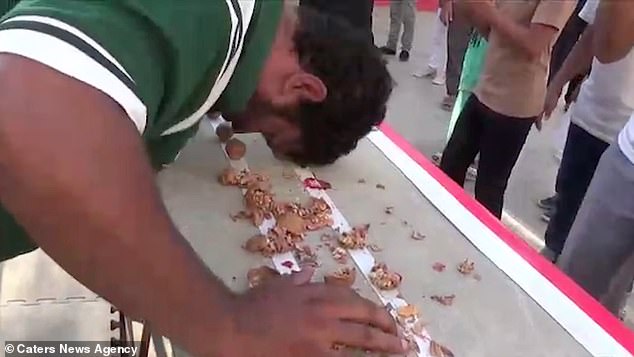 The Pakistani martial artist begins bleeding half way through, splattering blood across the table 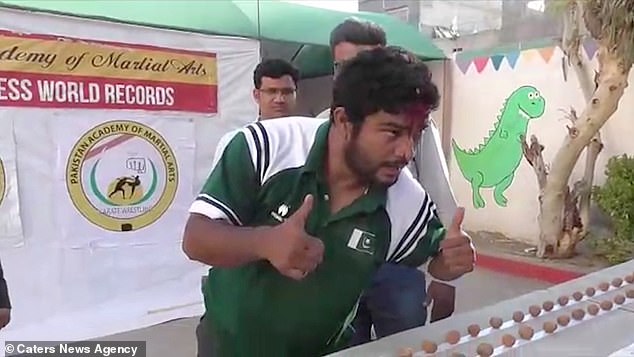 Mr Naseem had previously held several Guinness World Records including most green coconuts smashed with his head and most bottle caps removed with his head in one minute.

He also holds the record for most nunchaku back handrolls in one minute, and crushing the highest number of drink cans with his elbow.

The martial artist also broke the record for most watermelons smashed with a head in one minute in May, when he broke open 51.

Mr Naseem said: ‘Breaking any world record requires a lot of practice and funds. But I don’t get any help from the local government rather I’ve to bear all my financial expenses myself.

‘But I’m training with whatever resources I have and attempt for new records. I want to make my fellow Pakistanis feel proud.’