Two masked men ‘armed with a gun’ set multiple cars on fire near Birmingham Prison before feeling the scene.

Armed police officers raced to a car park amid reports that the two men had doused vehicles with petrol and then set them alight.

Two fire engines also attended to extinguish fires after at least ten vehicles were set ablaze outside the Category B men’s jail.

An insider at the prison said two members of staff spotted the masked men on the car park, seeing one spraying a liquid on the roofs of the vehicles.

When the pair were challenged, one of them pulled what appeared to be a handgun on the staff, forcing them back. 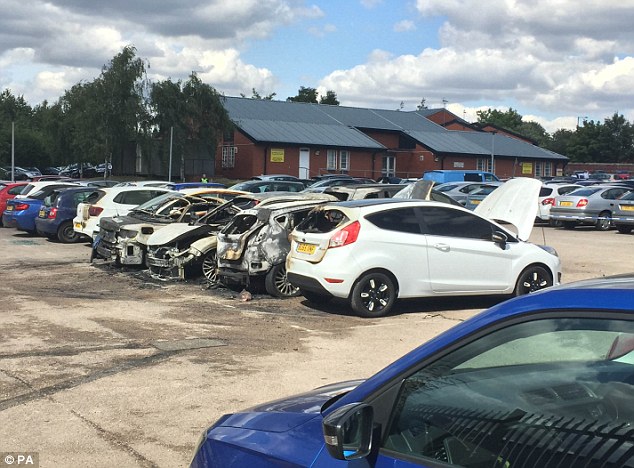 Workers at nearby businesses said they heard a loud bang and saw flames shoot into the sky during the arson attack at the staff car park.

Others claimed a firearm had been pointed at prison guards who tried to intervene during the drama that unfolded earlier this afternoon.

Eyewitnesses also revealed two men were seen running away from the scene after making a hole in a metal fence.

This afternoon  officers could be seen conducting finger-tip searches of the area around get back of the car park, which is surrounded by an industrial estate.

The blackened remains of several charred vehicles could also be seen in the car park as police cordoned off the area.

The owner of a local building company, who wanted to remain anonymous said: ‘We we’re sat out in the back and we heard a loud bang.

‘We thought it was one of the cement mixers from next door. One of colleagues from another brand phoned me to say what had gone on – we had no clue.

‘It’s crazy, we’ve never had anything like this happen.’

Another worker added: ‘We’ve heard they pulled a gun on prison staff who went over there. They were setting fire to loads of cars for some reason.

‘It’s an incredibly brazen thing to do and its amazing nobody got hurt.’

‘I looked up and saw cars on fire in the car park. I’m not to sure how they did it but all I know is that it happened really fast.

‘The red blaze coming from the cars was really high, you could see it over the fence. It was like a huge fireball. I’ve never seen anything like it before. It was crazy stuff.’ 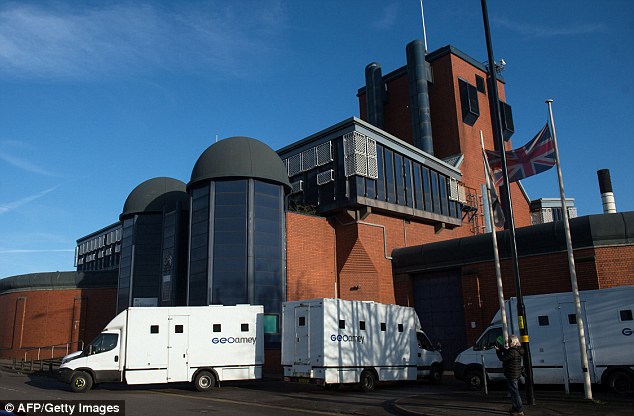 A West Midlands Police spokesman said: ‘We are responding to an incident on a car park outside Birmingham prison where several cars have been set on fire.

‘There are no reported injuries.

‘Two masked men, reportedly armed with a firearm, were seen to make off in a vehicle. More information to follow when we have it.’

A West Midlands Fire Service spokeman added that two fire engines and 10 firefighters were responding to the incident, which involved ‘a number of cars’.

Rob Kellett, director of HM Prison Birmingham, told MailOnline: ‘At approximately 1.30pm an incident took place in the car park across the road.

‘Nobody has been injured. West Midlands Police and the fire service are in attendance, and a fire has been extinguished.’