Shocking footage shows how masked thugs robbed a plumber’s van in broad daylight and threatened him with his own drill in front of his grandson and daughter.

Grandad-of-one Matthew O’Shea, 46, claims he has been robbed of his livelihood when a gang of five men stole £2,500 worth of tools and caused £1,500 of damage to his van yesterday afternoon.

The self-employed plumbing and heating engineer from Coalville, Leicestershire, had nipped home to check on his grandson Ronnie O’Shea, eight months, and daughter Lucy-Grace O’Shea, 18, when he spotted the gang outside his home.

As dad-of-four Matthew peered out his window to check what the ‘dodgy lads’ were up to, he realised they were breaking into his van and rushed to his front door to turn on his doorbell camera.

The camera recorded a 30-second video that shows one member of the gang trying to barricade ‘terrified’ Matthew in his home while the others raided his van.

As he shouted for them to stop, the thugs repeatedly told Matthew to ‘f*** off’ before one grabbed a drill from the van and wielded it towards the grandad. 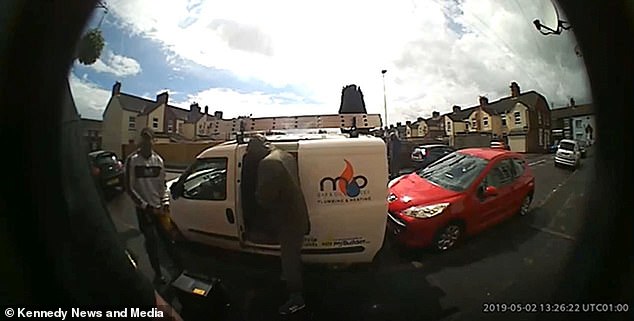 The group rummage through the parked white van, which is directly outside the victim’s home 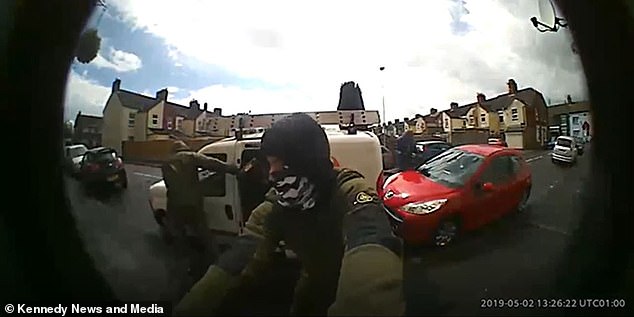 Matthew could only watch helplessly as he feared he would ‘get stabbed’ if he tried to fight them off and worried they would then hurt baby Ronnie and Lucy-Grace.

Matthew said: ‘I had just sat down for some lunch and I looked out the window and saw these guys. I said to my daughter “these look dodgy”.

‘As I looked out the window I saw they were breaking into my van. I ran straight round to the front door but they were holding it shut.

‘I rang the doorbell which records a 30 second video. I wish I had more footage. 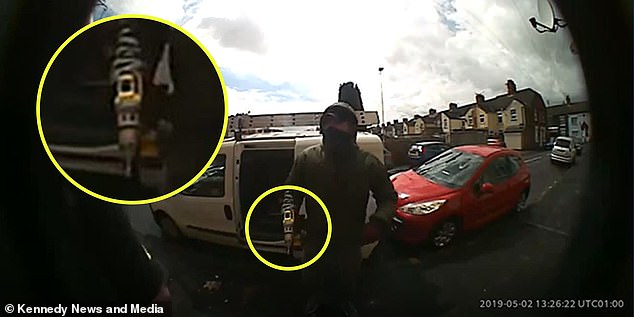 ‘I managed to get out because I’m twice the size of most of them but my main priority was my daughter and my grandson.

‘I knew I had to be careful. I could have gone out and had a go at them but there were five lads and they had my tools and bats and things like that.

‘I realised if I went out I could get stabbed or injured and even worse then they might come in the house and hurt my grandson and daughter.

‘It was terrifying, it was terrible. All I could do was shout at them to leave. They took about £2,500 of stuff and did about £1,500 damage to the van. That’s my livelihood. 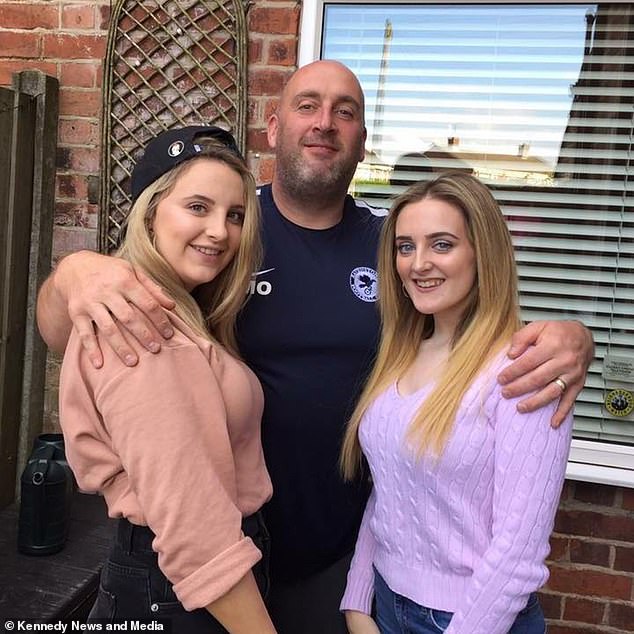 ‘As I looked out the window I saw they were breaking into my van. I ran straight round to the front door but they were holding it shut,’ said Matthew (pictured with his daughters)

‘I’m the victim and I’m the one who’s going to end up being punished in the long-run.

‘It’s so brazen in the middle of the day. I have never experienced anything like it.

‘You never think something like this will happen to you – not in broad daylight. At night I bring my toolkit in but I’d just nipped home for a sandwich and to check on my daughter and grandson.

‘I’m literally sat here today thinking ‘what is the point? Is it worth carrying on?’.’

As the gang made off towards their grey BMW with his ‘livelihood’ Matthew ran after them and claims he was violently pushed away. 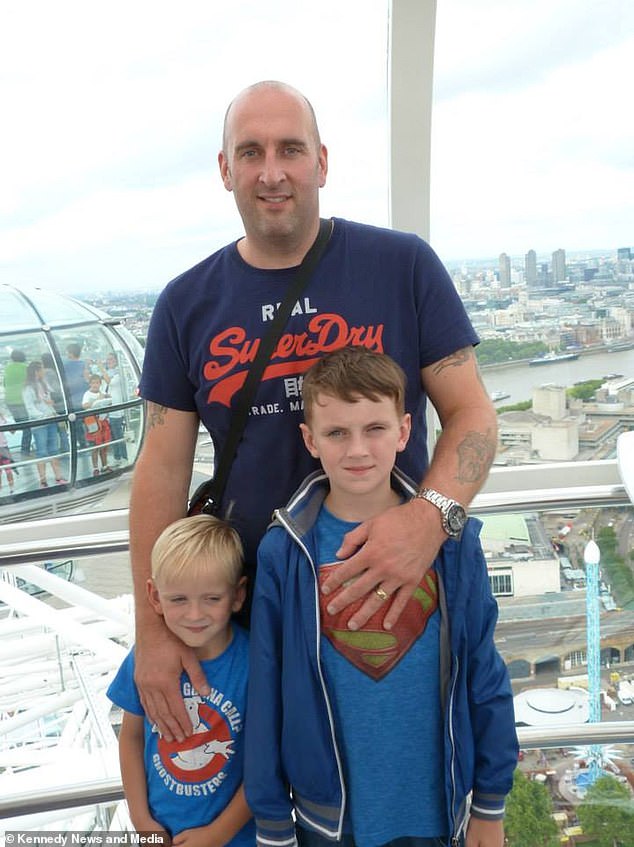 The dad then called 999 before jumping into his van to pursue the gang for four or five miles before they got away.

Leicestershire Police are investigating the incident which they believe may be linked to a string of similar thefts in the Charnwood area – but have yet to make any arrests.

Matthew says the ‘terrible’ ordeal hasn’t just affected him but his wife Lisa O’Shea, 45, and all four of their children Casey O’Shea, 20, Lucy-Grace, Benjamin O’Shea, 14, and Joshua O’Shea, 11.

Matthew said: ‘I ran after them and tried to get the tools of them and one of them pushed me back.

‘I called 999 then got in my van and chased them. I managed to keep up for four or five miles but they were in a BMW sport.

‘My daughter was really shaken by it – we all have been.

‘My youngest son was really shaken. He sat with his mum all night. He was so upset still today, he didn’t even want to go to school.

‘These are organised gangs. The police probably aren’t going to be able to catch them. It’s terrible.

‘I don’t know if I believe in karma but I hope it comes back and bites them in the future.’

Leicestershire Police are appealing for anyone with any information to come forward.

The force attended four other incidents involving theft of tools and criminal damage in the Charnwood area of Leicestershire yesterday and say there is an ‘indication’ all the events are linked.

A spokesman said: ‘At 1:30pm yesterday we received a report that told have been stolen from a van on Cambridge Street, Coalville.

‘A group of four or five men made off in a grey BMW.

‘Enquiries into the incident are still ongoing but no arrests have been made. We’re appealing for anyone with any information to come forward.

‘There is an indication that this is linked to a series of similar events in the Charnwood area yesterday. It seems to fit the timeframe and the circumstances.’