Home » World News » Memo Harry and Meghan: it’s not too late to make a U-turn

Fetch the Nutribullet! Meghan, I know you're a big fan of meditation, so I'm fast-tracking you for transcendental triage right this very minute. Why? Because it's not too late to turn around, come back and realise that the past couple of days were all just a lovely dream. 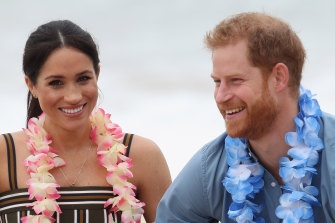 Consider the evidence. You've just had a six-week holiday. I mean, who is allowed that? Nobody, that's who – because normal employers know that, after that kind of break, their employees would never return.

Here in the cheap seats, we consider ourselves lucky to bag three weeks off to get married – and that's only because HR checks how much it all cost and can assure the boss we won't have enough money left in the bank to spontaneously buy a boutique hotel in Montenegro.

(I once wrote a piece about couples who do that. First, they become besotted with each other, then they randomly fall in love with bricks and mortar, although it's really the prospect of a whole new way of living that captures their imagination.)

After six weeks away from the Firm (note to selves: sack the numpty who gave that particular hall pass the go-ahead), which you spent gambolling with your cute-as-a-button baby Archie in the wilderness, kicking your heels and breathing lungfuls of fresh air, I'm not at all surprised you don't want to meekly trot back into the stable, Harry.

Cynics (not me; I fancy myself as nothing more than a healthy sceptic) muttered at the outset of your relationship that Meghan was a highly strung bolter and that, at some point, she'd be off. Nobody actually reckoned with the possibility that she might take you with her.

That's the trouble with long-term relationships. After all those centuries of monarchy, we took for granted your fidelity to the Crown, to the nation and to (gulp) us. There's a lesson learnt.

But, in truth, even those doughty souls who do make the momentous decision to quit their day jobs and withdraw from public life generally remain responsible enough to let their line manager know. It's only fair. Polite. A procedural nicety.

Your abrupt announcement to the media without first speaking to, oh, I don't know, Her Majesty the Queen aka Grandma, or the Prince of Wales, your father, was not just an egregious display of bad manners, but proof of the altered state of mind that seizes so many of us in January.

We've all done it. Made a resolution too far – then bitterly, secretly, regretted it. Phoned the divorce lawyers (my neighbour), joined the Scientologists (my ex), emptied every post-Christmas carb into the bin (every woman I know).

But the thing is, we've all also reneged on our pledges. January 12 is officially known as Quitter's Day – it's the fateful date when even the most dedicated start to falter. And that's OK.

I like to hang on until the 14th, just to steer well clear of clichés, but I'm not sure why because, at worst, nobody cares about your resolutions and, at best, they are delighted I've not built a bunker in the garden or signed up to retrain as a humanist celebrant. Again.

Which is why I really hope you reconsider this huge decision, Harry. Maybe you misread the memo as "revolution" rather than "resolution"?

You've certainly caused a massive rumpus and not because you want to leave. Despite the national obsession with you as a 12-year-old gravely walking behind your mother's funeral cortege, you are a 35-year-old grown man, a former Army captain, a husband and father who has every right to choose a different path to that which you have inherited.

What hurts is the unilateral way in which you have presented your fait accompli, like some self-absorbed teenager, unable or unwilling to acknowledge that your and Meghan's #NewYearSussexSquadGoals would send shock waves through the House of Windsor and far beyond.

Senior royals are reportedly "deeply disappointed" by your lack of consultation. Ouch. Meanwhile, courtiers are mystified by the practicalities – impracticalities – of your proposal to be an unroyal sort of royal, continuing some duties while exploiting your title to achieve financial autonomy. Couldn't you just put a JustGiving link on your sussexroyal.com website?

I've no idea what was scribbled on the other side of the envelope, but I sincerely hope it made more sense.

Right now, Buckingham Palace has been blindsided, and we're all a bit bewildered. Didn't they like the $4 million refurb of Frogmore Cottage that we funded? Didn't we holler enough when they got married?

It's hard to know what to make of the semi-autonomous Sussexes. How the rest of the family will react, now that defenestration is out of fashion, is anyone's guess.

But, if we're honest, we've spent years willing Harry to find love. And now that he has, all we can do is stand by, powerlessly, and hope with all our hearts that it brings a happy ending.