‘The view is always better with you’: Michelle Obama leads birthday wishes for husband Barack as the former president turns 57

Former president Barack Obama turned 57 on Saturday, and his wife Michelle was one of the first people to kick off the celebratory messages.

‘Happy birthday @BarackObama!’ she captioned the image. ‘The view is always better with you’. 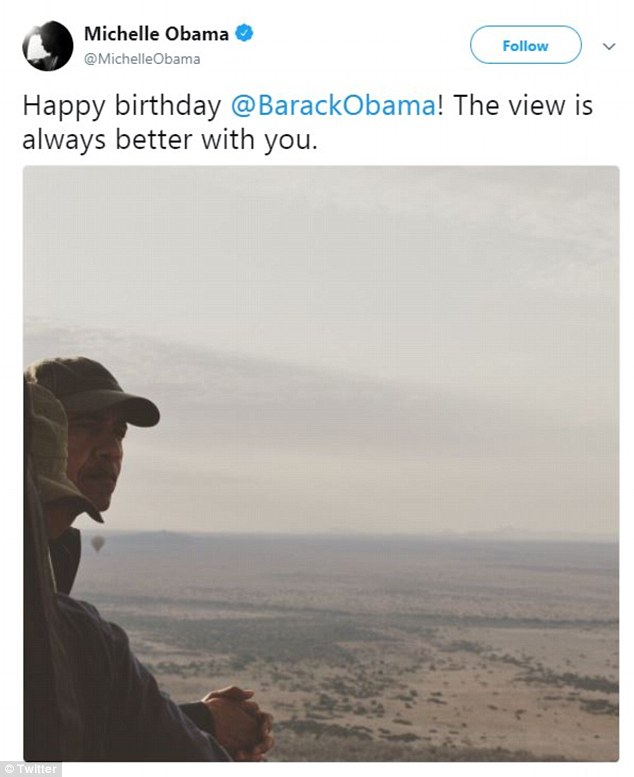 Former first lady posted a photo of Barack Obama overlooking a scenic landscape writing: ‘The view is always better with you’ 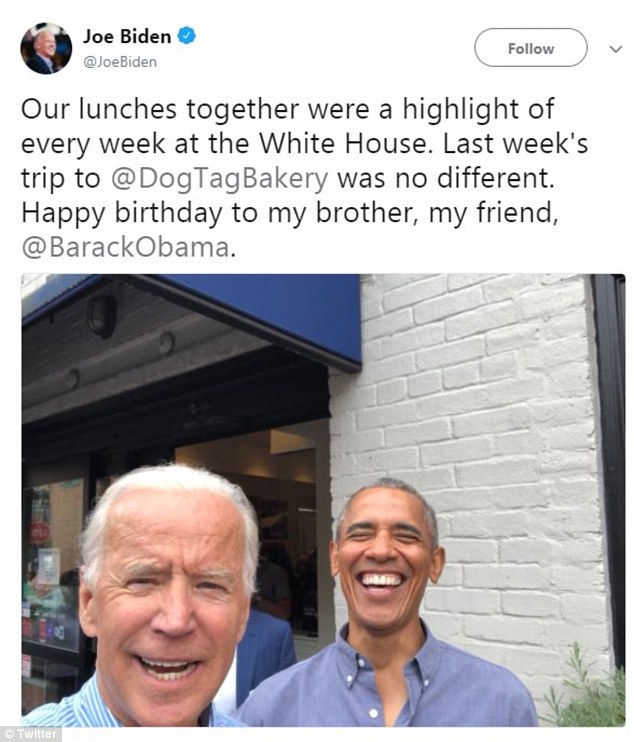 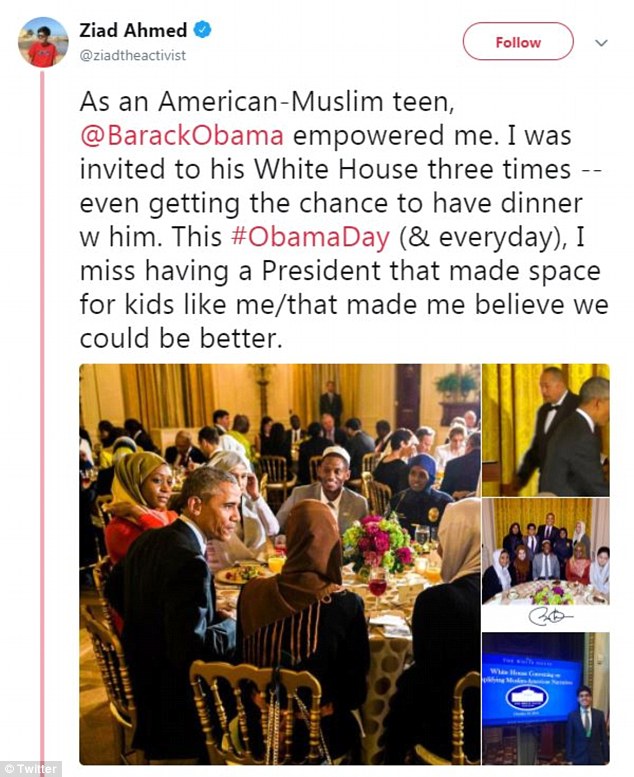 ‘I miss having a President that made space for kids like me. that made me believe we could be better,’ activist Ziad Ahmed tweeted 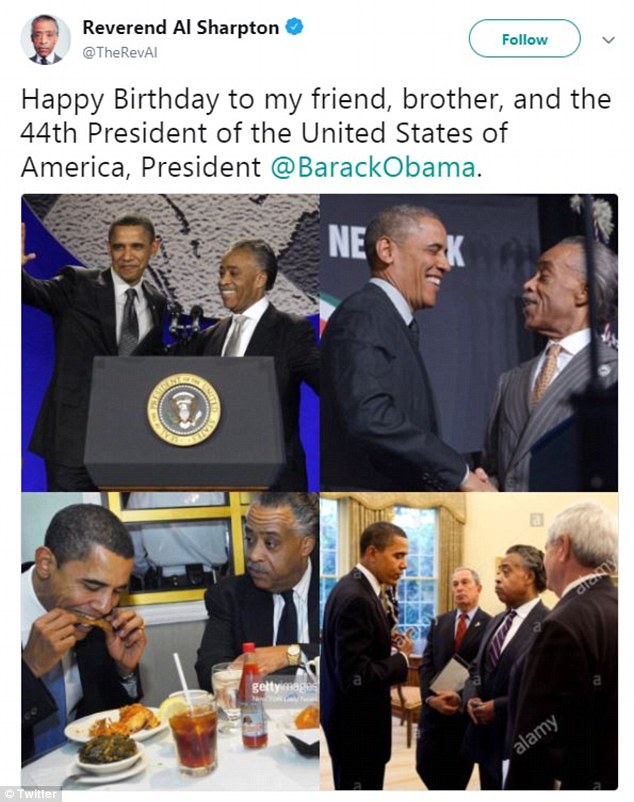 Rev Al Sharpton also tweeted a happy birthday message to the 44th president, sharing photos of them together

Former vice president Joe Biden also sent Obama well-wishes, posting a photo of them sharing a laugh outside a store. ‘Our lunches together were a highlight of every week at the White House. Last week’s trip to @DogTagBakery was no different. Happy birthday my brother, my friend.’

Other messages were soon pouring in for Obama leading to ‘#ObamaDay’ and ‘Happy Birthday Mr President’ to trend on Twitter.

‘Happy #ObamaDay,’ John Legend tweeted. ‘We in Indonesia (where he lived for a few years) toasting our President’.

‘Happy birthday, @BarackObama,’ Ellen DeGeneres wrote. ‘You busy? We could use some help’. 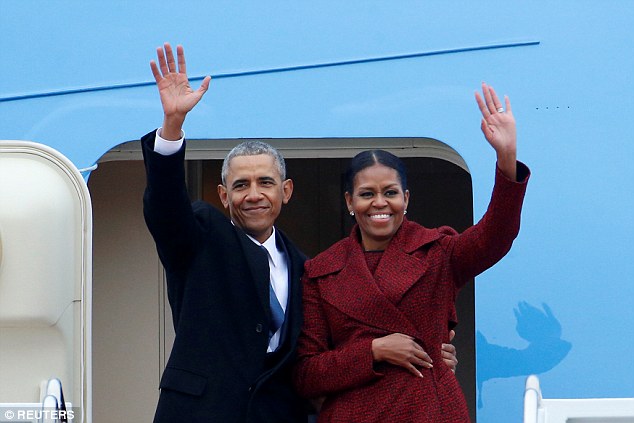 Barack Obama turned 57 on Saturday. He’s pictured above with wife Michelle Obama boarding Air Force One in Maryland on January 20, 2017 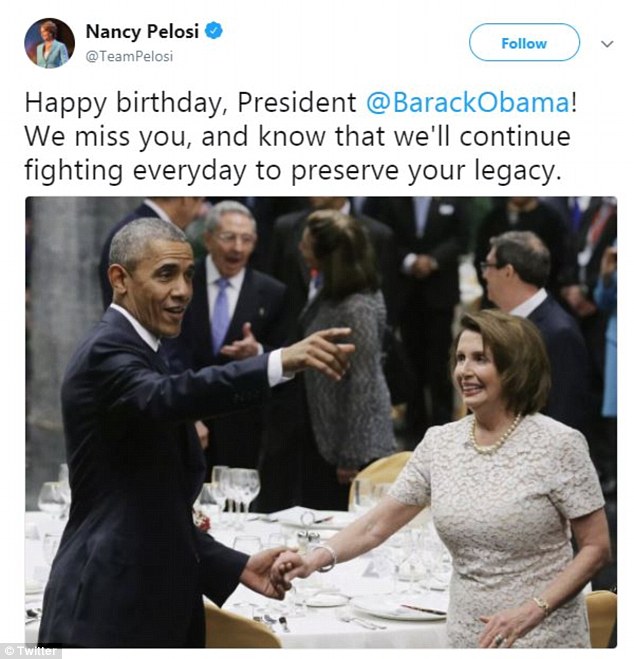 ‘We miss you, and know that we’ll continue fighting everyday to preserve your legacy,’ Nancy Pelosi tweeted 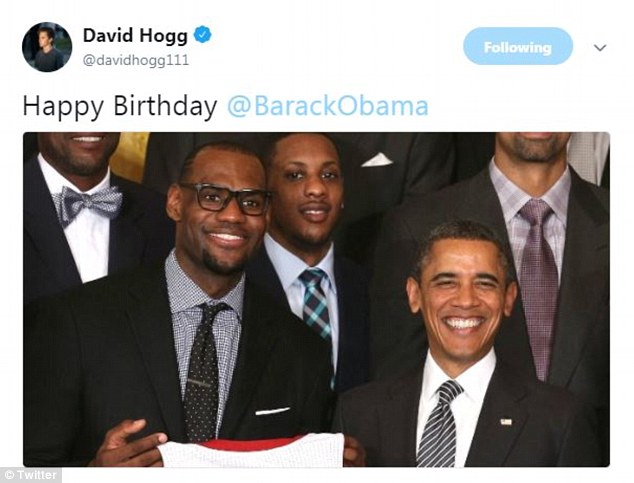 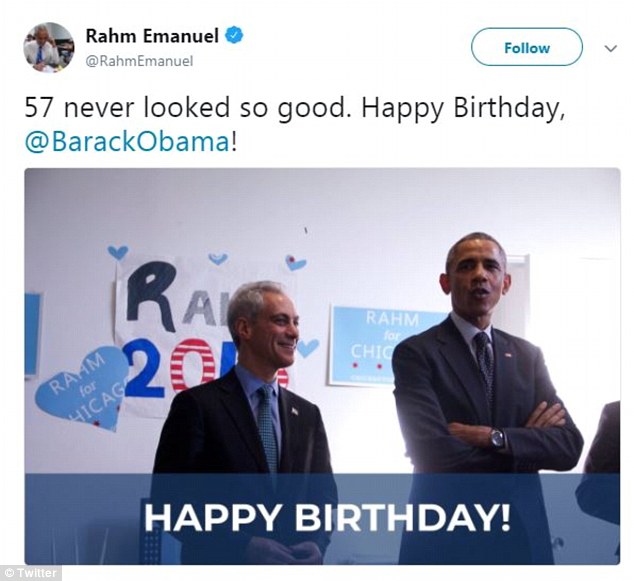 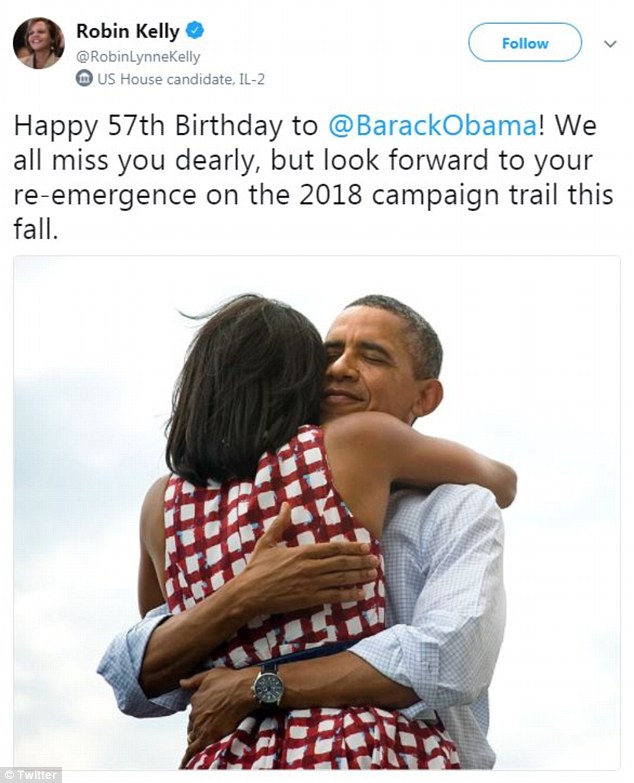 Many people tweeted how much they missed Obama in the White House, including Rep Robin Kelly 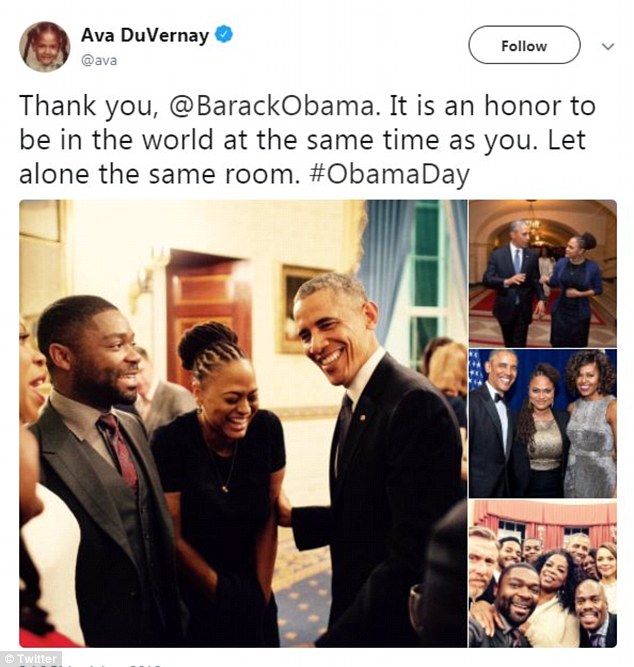 ‘It is an honor to be in the world at the same time as you,’ director Ava DuVernay posted

‘And Happy #ObamaDay Illinois Thank you for all you do,’ he added.

Eleven-year-old Mari Copeny also took to Twitter to send a birthday shout-out to the former president. Copeny made headlines when at eight-years-old she wrote a letter to the White House asking Obama if he could meet her a group of people coming to Washington DC to watch congressional hearings on the Flint water crisis.

Obama responded by visiting Flint, which has not had clean water since 2014.

‘Happy birthday to the greatest president of all time … love you!’ she captioned a photo of her staring up at Obama. ‘Happy Birthday Mr President’.

Others took a jab at current president Donald Trump, while telling Obama how much he is missed in the White House.

Talk show host Ellen DeGeneres also wished Obama a happy birthday, telling ‘we could use some help’ in an apparent jab at Trump 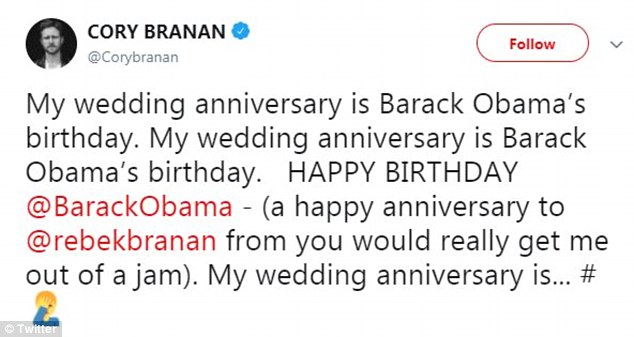 Singer Cory Branan asked Obama if he could tweet a happy anniversary to his wife, since it’s the same day as Obama’s birthday 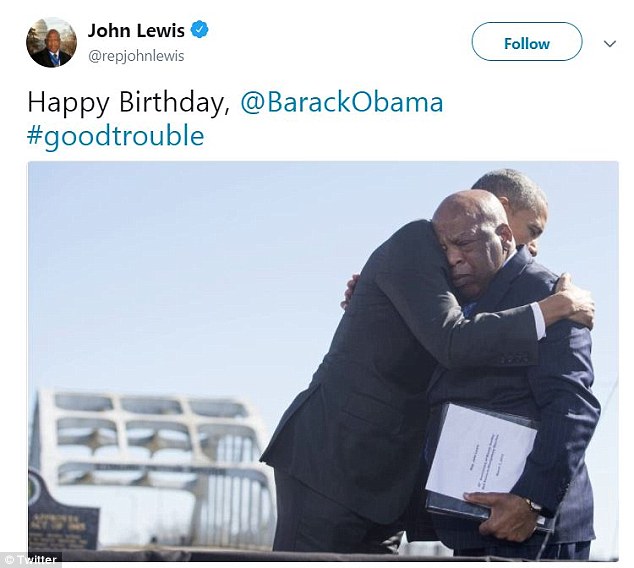 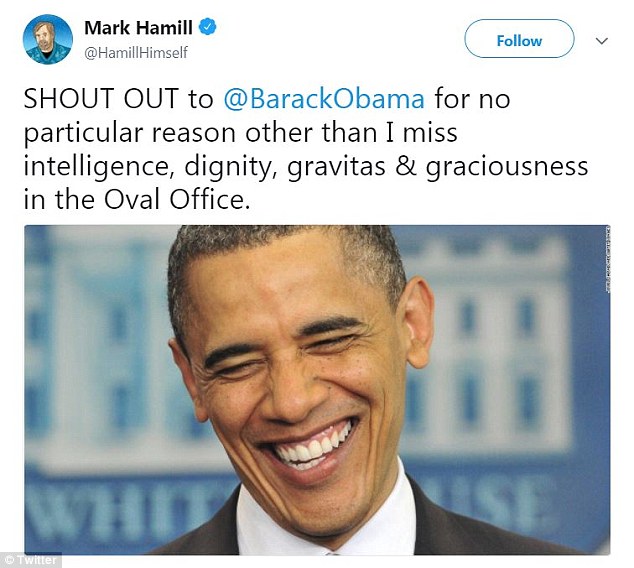 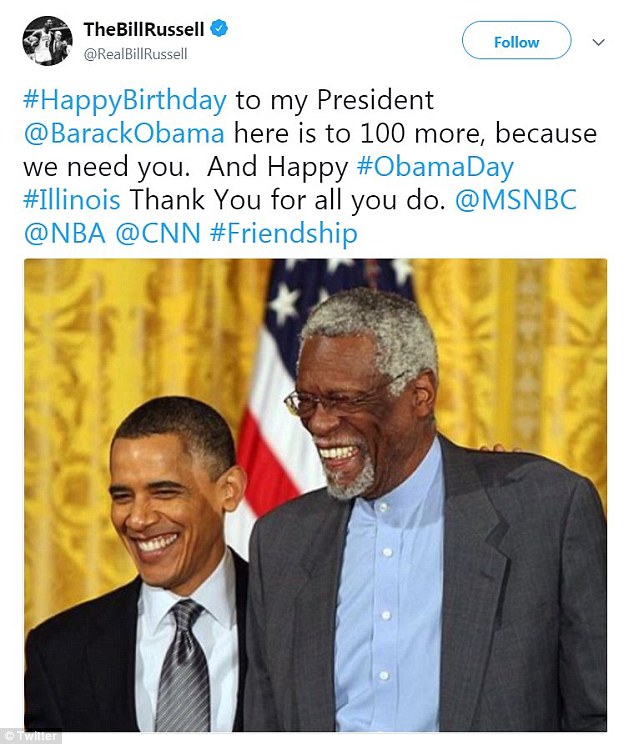 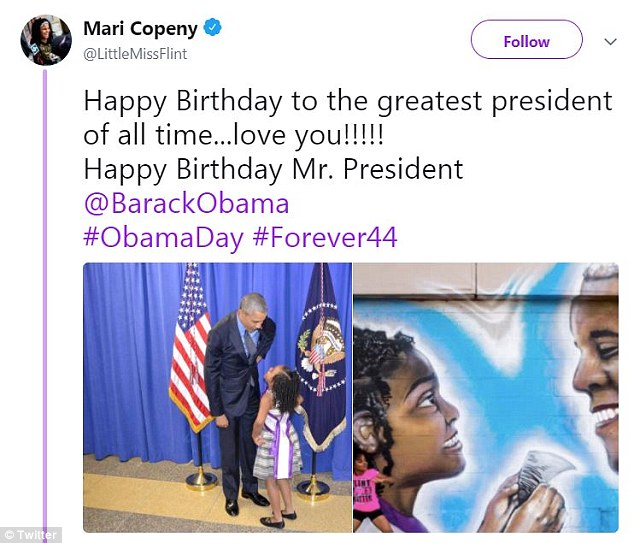 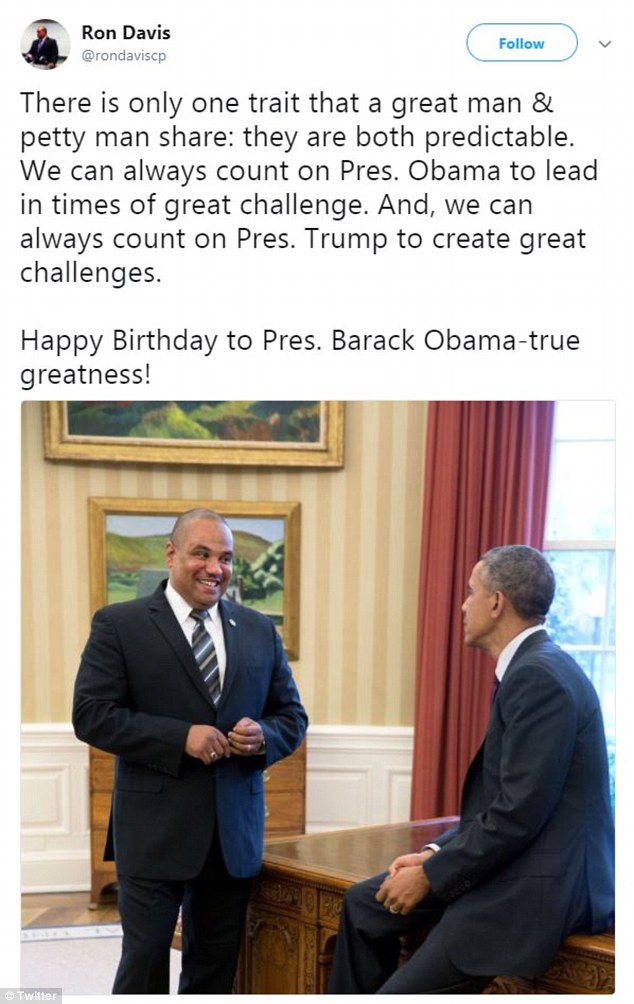 Davis is the former director of the U.S. Department of Justice’s Office of Community Oriented Policing Services and executive director of the President’s Task Force on 21st Century Policing under the Obama Administration.

Illinois, Obama’s home state and where he served as senator, is celebrating Obama’s birthday all day after declaring August 4 as a commemorative holiday in honor of the 44th president.

The state law went into affect this year marking Saturday as the first ever Obama Day.

The state law says the day is ‘set apart to honor the 44th president of the United States of America who began his career serving the People of Illinois in both the Illinois State Senate and the United States senate, and dedicated his life to protecting the rights of Americans and building bridges across communities’.

Obama and wife Michelle kicked off his birthday week at Beyonce and Jay Z’s On the Run II show in DC. A video of the couple dancing to a Jay Z song went viral.