Delhi: With nearly all constituencies counted, Indian Prime Minister Narendra Modi and his Hindu nationalist party have won a majority in India's general election by a landslide. 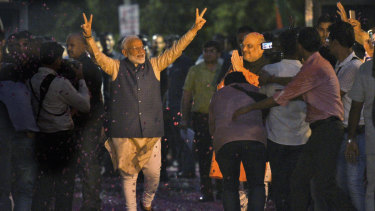 The victory will propel his Hindu nationalist party to back-to-back majorities in parliament for the first time in decades.

With most of the votes counted, the victory in India was widely seen as a referendum on Modi's Hindu-first politics that some observers say have bred intolerance toward Muslims and other religious minorities.

Modi is known also for his muscular stance on neighbouring Pakistan, with whom India nearly went to war earlier this year.

"India wins yet again," Modi exulted in a tweet. 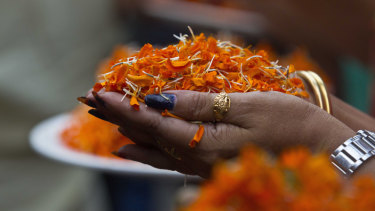 Election Commission data by Friday morning showed Modi's Bharatiya Janata Party winning 287 out of the 525 seats in the Lok Sabha, India's lower house of Parliament, well beyond the simple majority required to govern.

The party's top rival, the Indian National Congress led by Rahul Gandhi, won 50 seats. Its president, and the scion of modern India's most powerful political dynasty, Gandhi personally conceded his seat to BJP, signalling the end of an era.

The All India Trinamool Congress led by West Bengal chief minister Mamata Banerjee won 19 seats. Final results were not in for the remaining 42 seats and the final tally was not expected until later Friday.

He attributed the party's showing to his policies aimed at improving the lot of the nation's poor, including free medical insurance, relief for distressed farmers and a highly popular program to build 100 million toilets in a nation where basic sanitation remains a major problem.

The election victory was a resounding endorsement of the 68-year-old Modi, whose economic reforms have had mixed results but whose background as a social underdog from a lower-caste Hindu family clearly inspired some in India's highly stratified society. He appealed to tens of millions of Indians seeking upward mobility.

Some see Modi re-election mirrored a global trend of right-wing populists sweeping to victory, from the United States to Brazil to Italy, often on a platform promoting a tough stand on national security, protectionist trade policies and putting up barriers to immigration.

Critics have said his Hindu-first platform risks exacerbating social tensions in the country of 1.3 billion people.

Since Modi led the Bharatiya Janata Party to power in 2014, Hindu mobs have lynched dozens of Muslims and lower-caste Dalits – people in India's strict social hierarchy once considered "untouchable" – for consuming or slaughtering cows, which Hindus consider sacred.

Modi has largely shown complacency toward rising incidents of violence and discrimination against minorities, and to rhetoric like that of his party's president, who called mainly Muslim Bangladeshi migrants to India "termites".

Activists, lawyers, journalists and academics have been harassed and even prosecuted under anti-terrorism and anti-sedition laws that Human Rights Watch calls draconian.

But on the campaign trail, Modi seized on his personal narrative, presenting himself as a self-made man with the confidence to cut red tape and unleash India's economic potential. 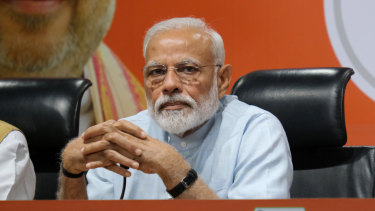 He labelled Congress party president Rahul Gandhi as an out-of-touch member of the elite.

This resonated in India, where an anti-corruption movement helped lead to the ouster of Congress partly for the perceived excesses of the Gandhi family, and for the bloated and inefficient bureaucracies Congress ran as the ruling party for nearly a half-century after independence.

Gandhi conceded defeat for his own parliamentary seat to his BJP rival in Amethi, a constituency in the northern state of Uttar Pradesh that had for decades been a Congress party bastion.

But Indian election rules allow candidates to run in more than one constituency, and Gandhi was ahead in the race for another seat he contested in the southern state of Kerala.

Even before the election commission had released any official results, calls came in from around the world – US President Donald Trump, Chinese President Xi Jinping, Israeli Prime Minister Benjamin Netanyahu- rushing to congratulate Modi.

An estimated 600 million voters cast ballots in India's six-week polls, a testimony to the vibrancy of the world's largest democracy just 72 years since India won independence from British colonial rule.

Voters expressed confidence that Modi could jumpstart India's stalling economy, despite his poor first-term record and failure to deliver on his pledge to create jobs.