‘Disabled b****’: Mother’s shocking rant at 3ft 6in comedian who suffers a rare form of dwarfism caught on video in feud about litter on a train

This is the moment a furious mother called a 3ft 6in comedian a ‘disabled b***h’ on a train after she accused her children of leaving litter around her mobility scooter.

Tanyalee Davis, 47, who has a form of dwarfism called diastrophic dysplasia, had been texting her partner to say ‘thank f*** this obnoxious family is leaving because they left a huge mess’.

But a teenage girl allegedly read the text while standing over the comedian, and yelled at her brothers and sisters to say the comedian had called them ‘abnormal. 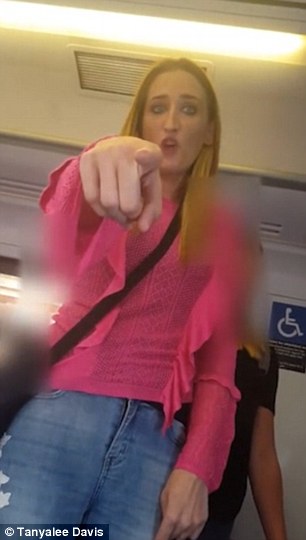 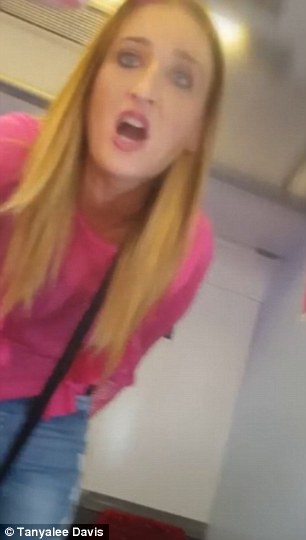 The girl is then said to have started abusing Ms Davis, who began filming the exchange on the East Midlands Trains service which was arriving at Nottingham.

Ms Davis was then confronted by the children’s mother, who called the Canadian comedian a ‘paedophile’ and ‘disabled b***h’ during the incident last Friday. 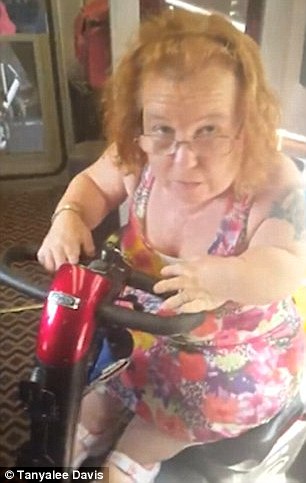 Ms Davis, pictured on another train in July, denied calling the children ‘abnormal’

Ms Davis, who lives in Norwich, pointed to the rubbish on the carriage floor, and the mother said: ‘What mess? This is all from us, is it? That’s not my concern.

‘My concern is that you’re recording children, my children. You were calling them abnormal five minutes ago. If anyone’s abnormal darling, it’s you.’

Ms Davis, who denied calling the woman’s children ‘abnormal’, told her that the siblings were being ‘obnoxious’.

Posting a video of the row on YouTube, Ms Davis said: ‘An unruly teenager read a private text when standing over me in which I was telling my partner ‘thank f*** this obnoxious family is leaving because they left a huge mess’. 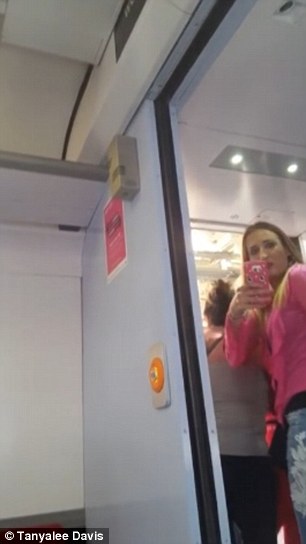 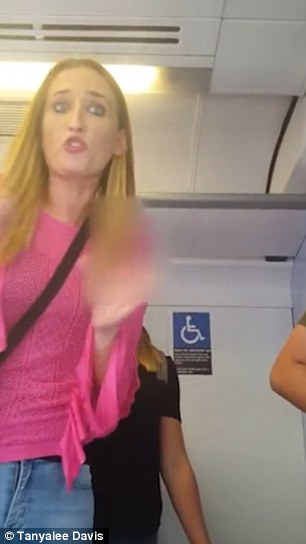 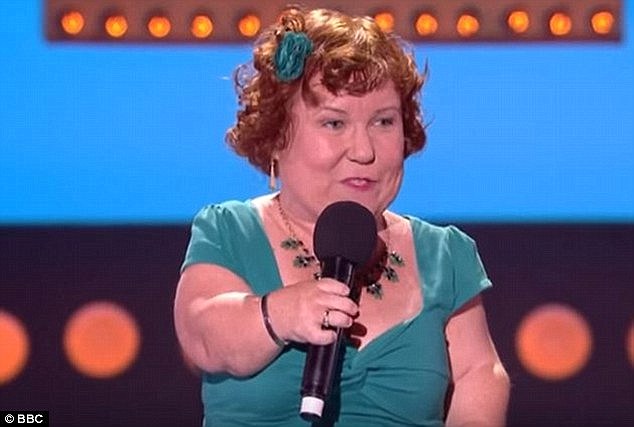 ‘This girl ended yelling over her brothers and sisters who were cued up to get off at Nottingham saying I called them ‘abnormal’. She then started calling me names to which I turned on the video because I could see this escalating.

On July 15, Tanyalee Davis was left sobbing on a Great Western Railway train after a guard ordered her to move her mobility scooter out of the wheelchair area – before making a public announcement about her.

Addressing all passengers on the train as the couple headed for Norwich from Plymouth, the employee said the train would have to stop because of her.

The comedian was ordered to move so a woman’s pram could go in the disabled space. But when she refused, she was ‘harassed’ and ‘shamed’.

GWR said later: ‘No one travelling with us should be left feeling like this… this should not have happened.’

Then on July 20, Ms Davis had a further bad train experience in July when she was waiting by the door at York for a ramp for her scooter – but no one came to help, and the LNER train left.

She then had to wait until Darlington to get off, before returning to York on another service. Train staff were said to have been ‘mortified’ at the error and bought her two bottles of wine.

Just last week Ms Davis, who lives in Norwich, revealed how she had to wait two hours to get her mobility scooter from a plane at London Stansted Airport, before finding it was missing a vital custom-made attachment.

‘She then proceeded to drop trash on the floor and kick it at my scooter.She continued making fun of my hands and legs while her little brothers gave me the finger.

‘Their mother who had been in a different carriage the whole time pounced in calling me a paedophile and started recording me saying she was going to call the police.

‘She made rude gestures to me as a family member grabbed her. The family then stood on the platform making rude gestures. I contacted the new guard Chris who came onboard at Nottingham and explained what happened.

‘He was lovely and took my statement, name and number and suggested I contact British Transport Police which I did. They are pulling CCTV and will be collecting this video.’

A British Transport Police spokesman told MailOnline today: ‘We received a report via our text service of verbal abuse towards a woman on board a train between Norwich and Nottingham on Friday, August 31.

‘Officers have spoken with the victim and are currently investigating the incident which happened at approximately 3.30pm.

An East Midlands Trains spokesman has been approached for comment.

Ms Davis, who performed her first one woman show called ‘Little Do They Know’ at the Edinburgh Fringe in 2007, describes herself as ‘the Ferrari of comedy – low to the ground and kind of racy’.