Shocked passers-by watched as officers pulled over the blue BMW at traffic lights in Ipswich, Suffolk. 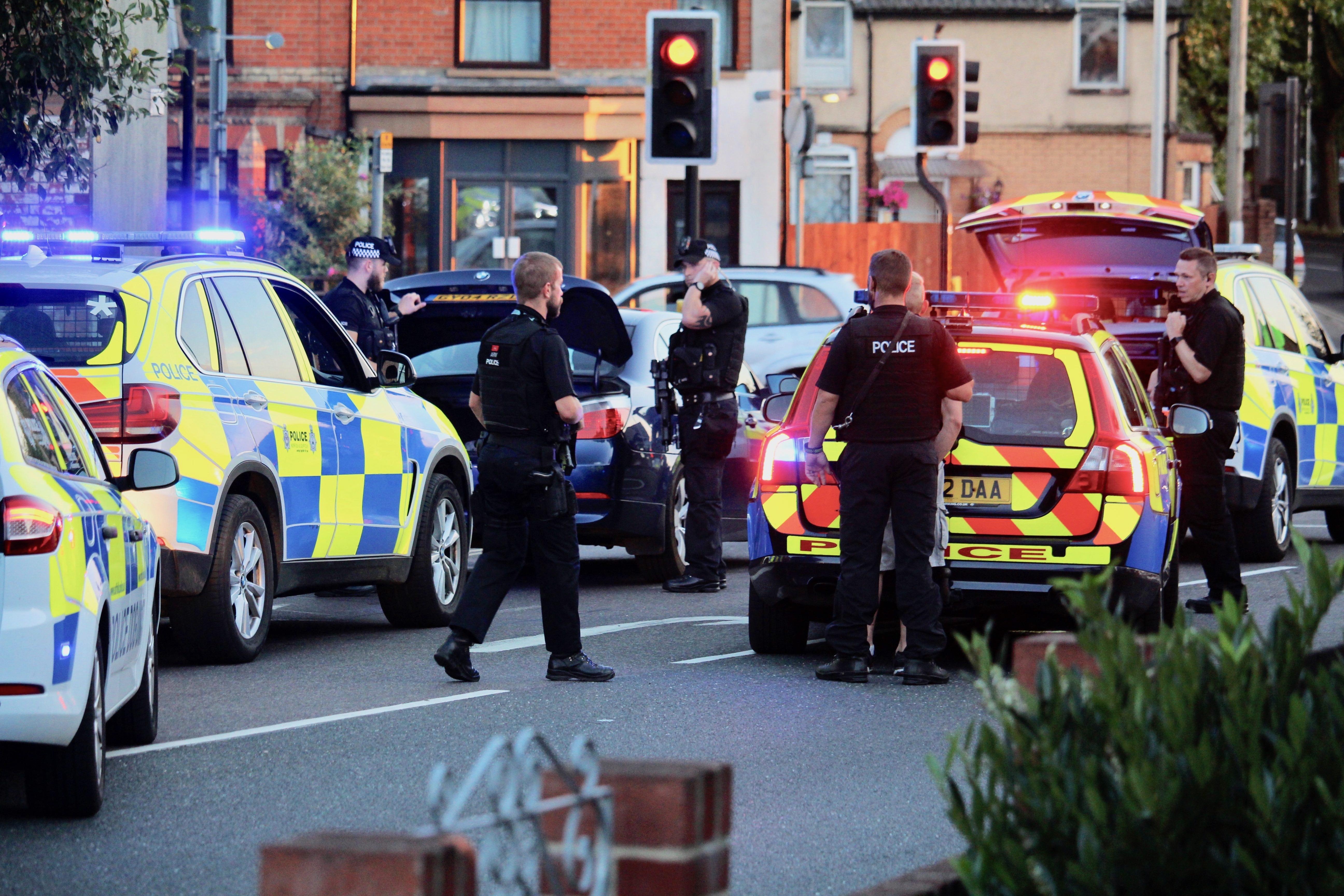 Police armed with Heckler and Koch carbines ordered the two men out of the car with their hands in the air on Tuesday evening.

The pair were arrested on suspicion of affray and made to stand in handcuffs before being taken away for questioning.

Traffic was brought to a standstill during the incident at the junction of Chevalier Street and Branford Road. 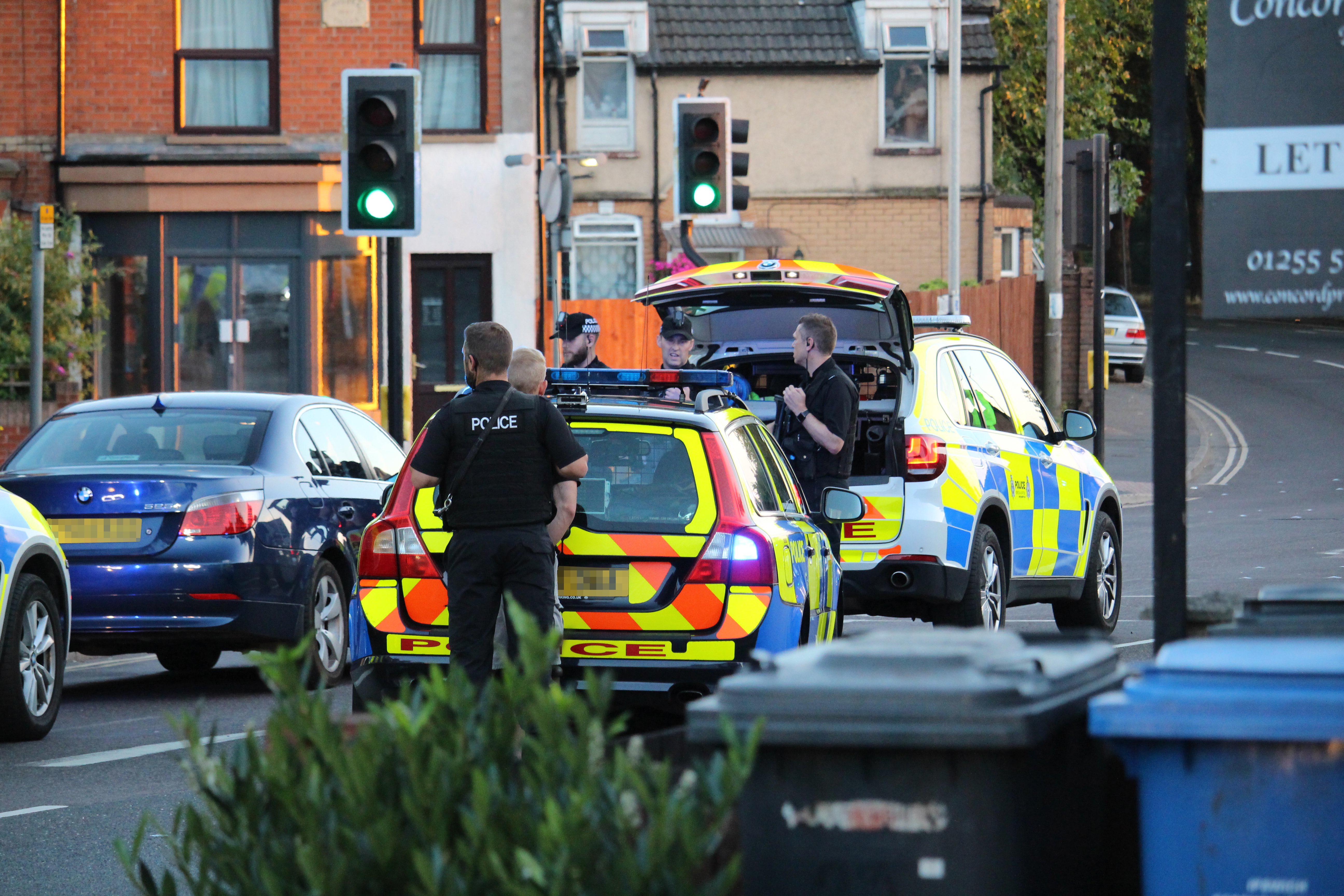 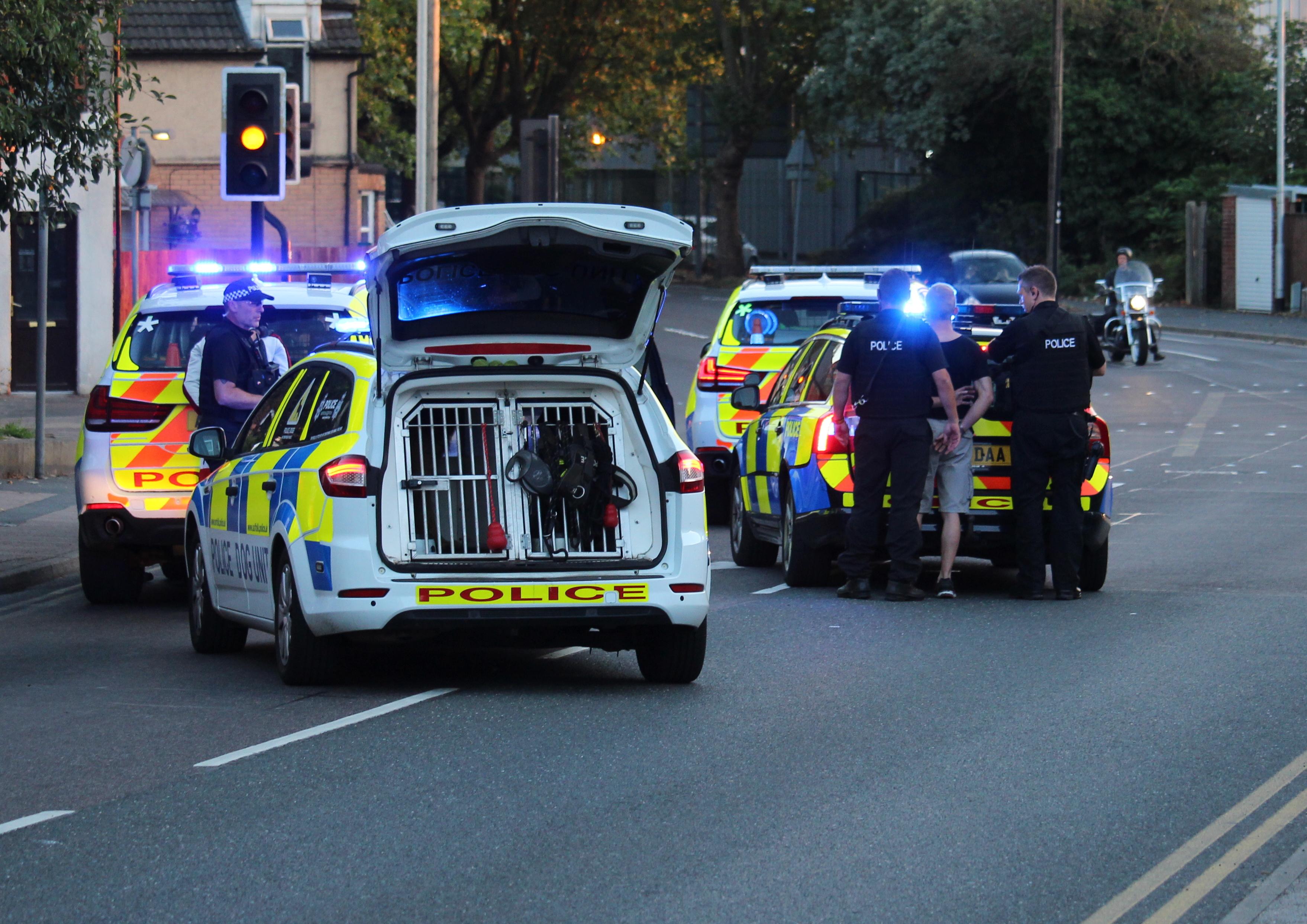 The arrests happened after a 17-year-old boy told police he had been threatened by two men with a hammer and an axe near a bank on the other side of town.

The teenager is said to have told police that he knew the men who threatened him outside the Barclays Bank branch in Woodbridge Road, Ipswich.

A witness who saw the arrests said: “It was shocking to see. It was a quiet evening in Ipswich and all of a sudden the area was flooded with armed cops.

“These two guys were holding their hands in the air as they were arrested. T was like something out of the Wild West.” 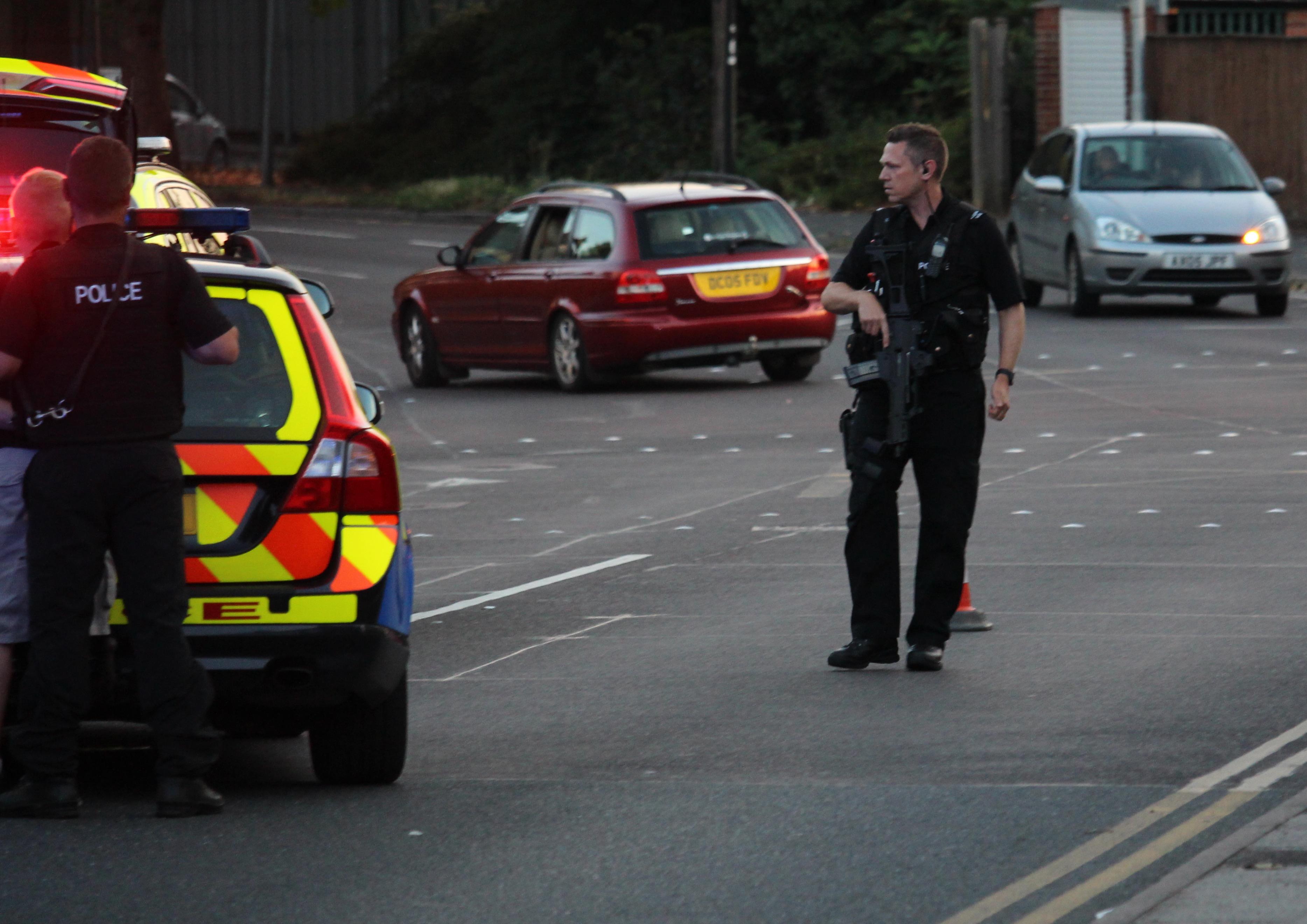 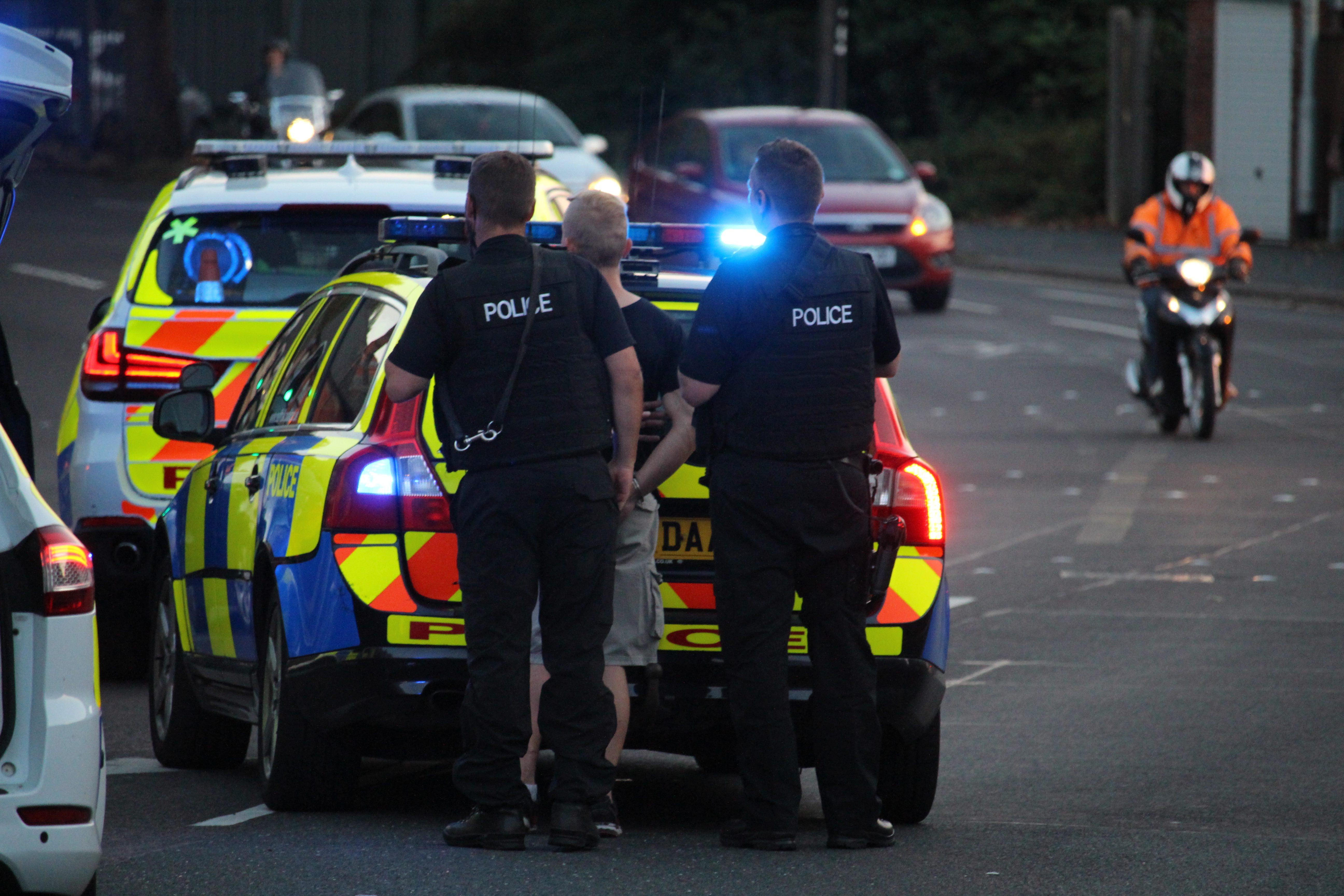 A Suffolk Police spokesman said: “Police were called just after 7.50pm by a 17-year-old boy reporting that he had just been threatened by two men who are known to him, at Barclays Bank in Woodbridge Road.

“The victim alleges that the suspects got out of a blue BMW 5 Series brandishing weapons including a hammer and an axe and made threats towards him, before getting back into the car and driving off.

“Officers began searching the area for the vehicle, which was located in Chevallier Street around 30 minutes later at 8.20pm.

“A 28-year-old man and a 24-year-old man, both from Ipswich, were subsequently arrested on suspicion of affray and taken to Martlesham Police Investigation Centre, where they currently remain for questioning.”

The spokesman said it was a normal response for armed officers to be sent out to incidents reported to involve weapons.