Mother and ‘terrified’ daughter, three, were stranded by RAC for a nightmare 28 HOURS after their car broke down and mechanics passed them between three different recovery teams

A mother and her three-year-old daughter were left stranded for 28 hours as they were passed between three recovery teams by the RAC’s breakdown service.

Sally Evans, 39, and her daughter Eliza endured a nightmare journey when her car broke down on a roundabout outside of Norwich on Thursday afternoon.

They were travelling back to their home on the Isle of Wight and were taken to a service station where they were left until midnight – with no idea where they were.

Ms Evans and her child eventually made it to a hotel at 1am, and had to manage the last leg of the trip on their own, making it home to Ryde on Friday at 3pm.

The mother had to pay nearly £500 for a firm to transport her Ford Fiesta from the mainland to Ryde, and the car was finally returned to the isle on Saturday afternoon.

Today, Ms Evans described the ordeal as ‘traumatising’ and has launched a complaint against the RAC, which she pays £168 a year for its top level of breakdown cover. 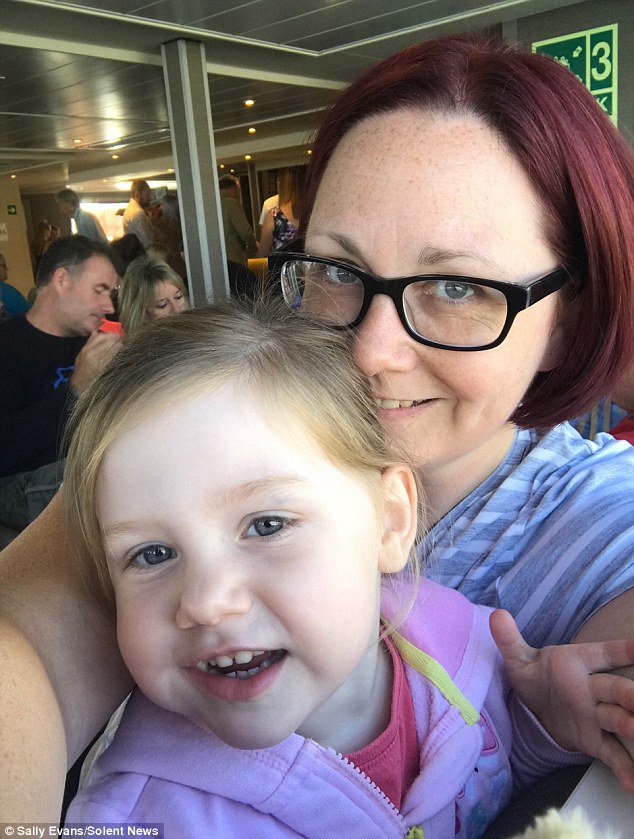 Sally Evans, 39, and her daughter Eliza endured a nightmare journey and were left stranded for 28 hours as they were passed between recovery teams by the RAC’s breakdown service

The firm, whose headquarters are based in Bristol, boasts of offering ‘complete peace of mind when you’re covered by the RAC’. It today apologised to Ms Evans and is investigating the debacle.

The mother and daughter’s nightmare began after they had been visiting friends in Norwich, Norfolk, for a week and started the first leg of their journey back to Southampton Ferry Port, Hants – a trip expected to last no more than four hours.

On a roundabout on the A11 out of Norwich, the engine malfunction light came on in Ms Evans’s car, and the engine cut out. After a few tries she was able to re-start the car and ‘crawl’ it off the roundabout.

The beige Fiesta broke down just 45 minutes into their 200 mile journey, and Ms Evans called her breakdown cover company RAC, which she has paid £14 per month to since 2016.

A mechanic was sent out to the nine-year-old diesel car, and Ms Evans was advised not to drive it any further. The mechanic offered to tow her as far as Bishop’s Stortford, Herts.

At Bishop’s Stortford, another tow truck contracted by the RAC was called to take them further on their journey, and after an hour showed up to take them to Guildford, Surrey.

When the second driver dropped the pair off at another service station, Ms Evans said he told her ‘it wasn’t his job’ to know who was picking them up next.

Ms Evans, who works as a local area coordinator for the Isle of Wight council, said he left her and her daughter at a dark service station on the A3 at Guildford, Surrey, surrounded by woodland on Thursday. 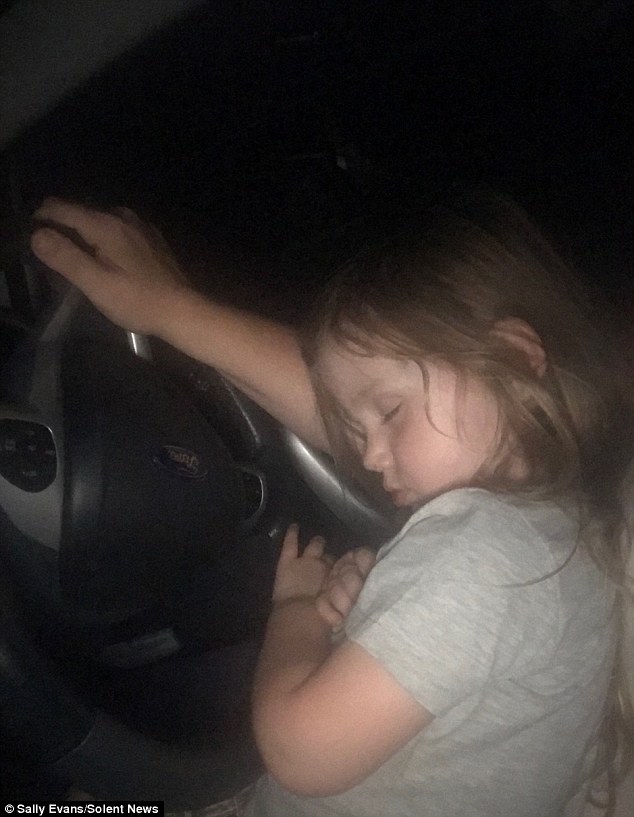 When the second driver dropped the pair off at another service station, Ms Evans said he told her ‘it wasn’t his job’ to know who was picking them up next. Pictured: Ms Evans’ daughter Eliza asleep in the car while they wait for the RAC

She said: ‘We didn’t even know where we were and the driver had left us by some very dark woods.

‘My daughter was very scared and since the whole experience she has been waking up during the night because of it. She has been left completely traumatised.

‘We kept calling the RAC who kept saying someone would be with us soon, but they weren’t coming.

‘It was horrible sitting there with a little girl saying ”mummy, it’s getting dark”.

‘The air conditioning in the service station garage made it too cold to sit in there.

‘There was dark woodland behind the car, and she had a car seat in the back but she refused to sit back there because she was terrified – she wouldn’t even be in the front passenger seat, she had to be sitting on me.

‘I was on the phone, pleading with the RAC to come and help us, and no three-year-old should have to cuddle her mummy and say ”it’s okay” – but that’s what she did.

‘She kept saying ”I just want to go home”.

‘It wasn’t until 11pm that a taxi was finally called to take us to a hotel.

‘By the time we got to our room it was almost 1am – it had been 14 hours since we left and we were getting no help.

‘I couldn’t sleep as I had migraines because of the whole experience. I was up being sick all night.’

The following day Ms Evans and Eliza were picked up from the hotel by an RAC low loader and the driver offered to take them all the way home to Ryde, Isle of Wight. 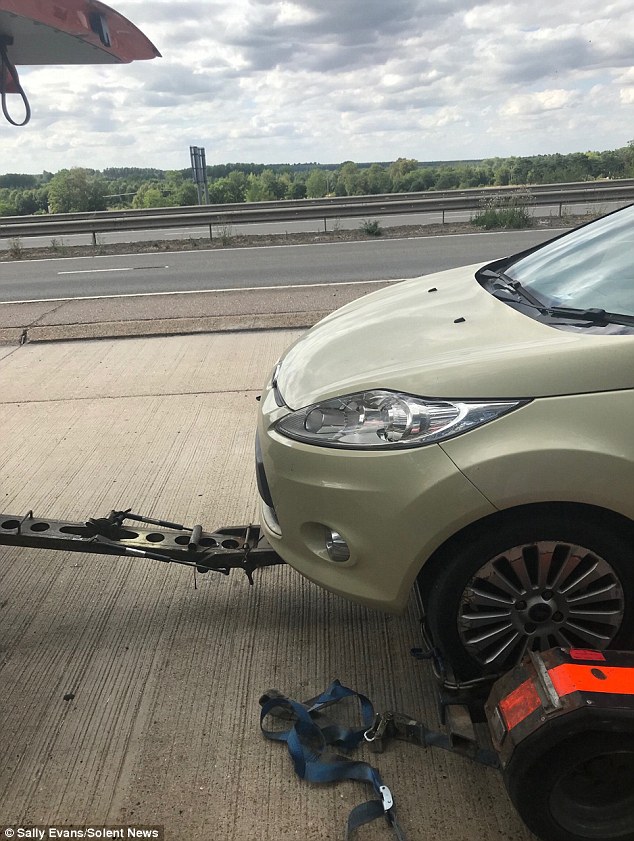 The beige Fiesta broke down just 45 minutes into their 200 mile journey, and Ms Evans called her breakdown cover company RAC, which she has paid £14 per month to since 2016

Ms Evans added: ‘The driver the following day was so apologetic and was doing everything to help us. None of this was his fault.

‘He called his boss to ask if he could drive us directly to the Isle of Wight to avoid anymore trauma, but his boss told him no.’

The driver was allowed to take Ms Evans and Eliza to the Red Funnel ferry port on the Isle of Wight, where they were told by the RAC Ms Evans’ car could not be transported to the island for a few days.

The mother and daughter took the ferry without their car, arriving at their home at 3pm on Friday, 28 hours after leaving Norfolk.

Ms Evans said: ‘The RAC lied to us on so many occasions saying that someone was coming to help us when they clearly weren’t. It was completely unfair and thoughtless.

‘It is wrong that these big companies can’t offer a good standard of service despite us paying for them each month.’

Once she was safely home, the RAC told Miss Evans they were unable to locate her car on the mainland, offering three ‘possible locations’ of the Ford Fiesta across the south coast.

Ms Evans added: ‘They had arranged for a firm to take my car over to the island, but the RAC had no idea where they had taken it.

‘At first they told me it was at a depot on the Isle of Wight, and then I was told it was either in Southampton or Havant back on the mainland.

‘I received a call from a haulage service which then charged me £483 to bring the car back over to the island. My deal with the RAC means I had to pay any ferry charges as part of a recovery service.’

The car, which Ms Evans bought in 2013 and which has not yet been fixed, was returned to Ryde on Saturday afternoon, and Eliza’s father, fish shop owner Chris Weston, 43, picked up the keys from the haulage company.

Ms Evans added: ‘I didn’t even know until I got home that I had the ”onward journey” cover which means I was entitled to a courtesy car for up to three days or a hotel stay.

‘If I’d known about the courtesy car, I’d have taken that instead of staying the night in the hotel and driven back to my friend’s house in Norwich.

‘There is no doubt in my mind that they would have seen this option on their system. I hope that no one else ever has to go through an experience like this.’

Ms Evans has complained to the RAC about the incident.

An RAC spokesman today said: ‘We apologise to Miss Evans if the service she received fell short of that our members rightly expect.

‘We are investigating the incident and are in contact with the contractors who assisted in the recovery to address a number of concerns that she has raised.

‘We wish to put matters right for Miss Evans and intend to offer a goodwill gesture in recognition of the delay and stress caused as well as looking at the expenses she incurred.’