A mother has described the terrifying moment she had to be rescued along with her toddler and a pensioner after their cars became stuck in floodwater.

The downpours also caused landslides and disrupted road, rail and ferry travel – while a police officer narrowly escaped being trapped in his patrol car after it was crushed by a toppled lorry. 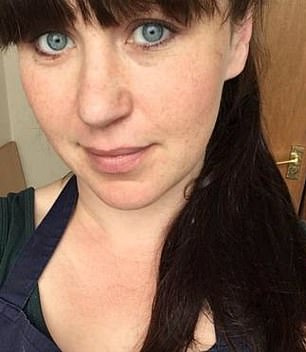 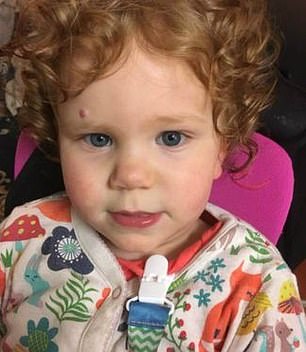 Trapped: Nikki Birgit Campbell (left), 36, and her 23-month-old daughter Rhea (right) were stuck in flooding along with a pensioner on the A762 near Glenlee, Kirkcudbrightshire

Last night, the stranded mother, Miss Campbell, said she and Rhea, who has cerebral palsy, were returning from a visit to a hospital in Glasgow to meet Santa.

They were rescued on the A762 near Glenlee, Kirkcudbrightshire. A 73-year-old man was also pulled to safety from another vehicle. The emergency services were alerted about 3.40pm on Tuesday.

In a video posted online, Miss Campbell, from Annan, Dumfriesshire, thanked two local men who pulled them to safety, describing them as ‘heroes’.

She added: ‘If it wasn’t for them then I don’t know what would have happened to us. We drove a road I have driven so many times that was flooded…

‘Unfortunately my car isn’t as hardcore as I thought it was. Before I knew it my car was filled with water. I was trying to keep Rhea safe. 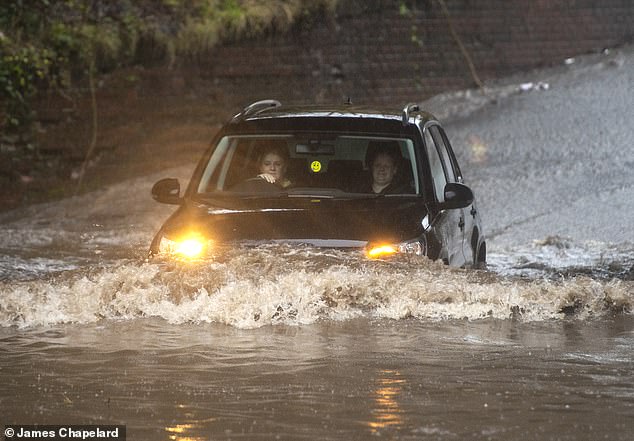 A driver tries to make her way through flooding in Rutherglen, Lanarkshire, on Tuesday

‘I feel like such a bad mum for putting my baby in that danger. She was so scared… I’m still very, very scared and upset over what happened.’

It is believed Miss Campbell’s car will be written off, while Rhea’s wheelchair and an iPad were lost in the flood.

The pensioner was saved by two workers from hydro power firm Drax, Robert Peacock and Daniel Hunter, who waded through chest-deep water to reach him.

Mr Peacock said: ‘It was by chance we came across the elderly gentleman. He had been stranded in his car in freezing water for an hour.

‘We couldn’t open the doors and ended up having to smash the rear window to drag him out. I think hypothermia would have set in soon had we not got to him.’

All three were taken to Dumfries and Galloway Hospital and were discharged after being treated for minor injuries. 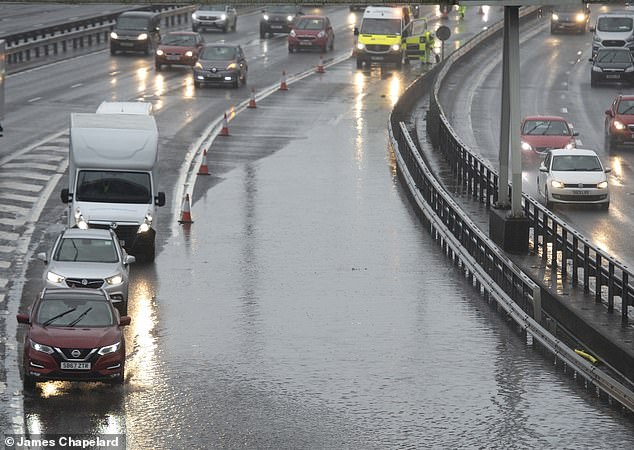 Chief Inspector Bryan Lee of Police Scotland said: ‘I can’t praise the officers and members of the public involved in these rescues enough.

‘Their actions, which were nothing short of heroic, saved the lives of three people. Without their bravery this could have had a very different outcome.’

Elsewhere, access to the village of Kylerhea, on the Isle of Skye, was restored yesterday morning after it had been cut off by a landslide.

Mud slid from the hillside amid heavy rain and wind on Tuesday evening, with Highland Council workers needing a digger to clear up to 400ft of debris.

A landslide also blocked a road on the neighbouring Isle of Raasay.

In the Central Belt, flooding at Blairhill in Coatbridge disrupted services through Glasgow’s Queen Street Station, while floodwater at Muirhouse, in the city’s South Side, affected the Cathcart Circle line 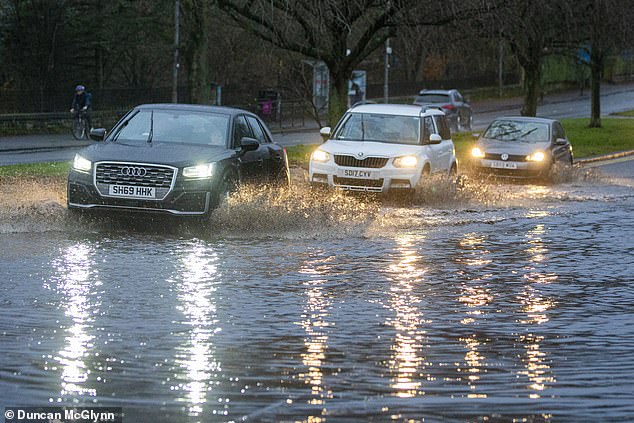 There were delays and cancellations between Edinburgh and Dunbar, East Lothian, due to damaged wires on the East Coast main line, and delays on the Glasgow to Aberdeen route in the morning after a flood alarm for the River Earn viaduct was activated.

CalMac sailings were disrupted on the West Coast, with the ferry operator hoping to run a revised service on many routes today.

The Scottish Environment Protection Agency had seven flood alerts in place yesterday and 12 more serious flood warnings, while the Met Office issued a yellow weather warning for ice across the Highlands, including Inverness.

Meanwhile, a police officer last night told of his narrow escape after his patrol car was crushed by a lorry blown over by high winds.

Sergeant John Easton was ‘carrying out scene protection’ after a lorry toppled over on the A1 between Haddington and Dunbar at 10.15am on Tuesday. A second lorry that was driving past was then blown over, crushing his car.

He said: ‘I was on the radio when the lorry started to fall over… fortunately I walked away unscathed. I won’t forget why the area’s called the ‘Windy Bridge’ now.’