THIS passenger certainly looks like she believes in travelling light – after she was spotted doing a shocking striptease through Miami International Airport.

The unidentified exhibitionist is first seen wandering around the busy terminal barefoot in just a matching blue bra and panties. 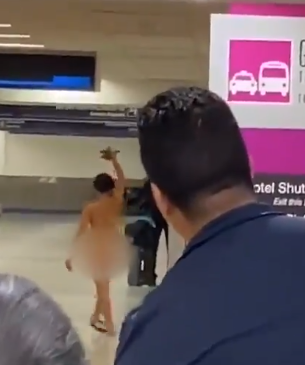 However, within seconds she is totally nude after ditching her lingerie to the utter amazement of stunned airport staff and fellow travellers.

In a 30-second clip posted on Twitter by Billy Corben, the woman is seen singing as she struts through the baggage claim area.

She first whips off her top and then her panties, without even breaking stride, reports Fox News.

One astonished worker can even be seen craning his neck to get a better look in the video posted with the simple caption: 'Because it’s Miami.' 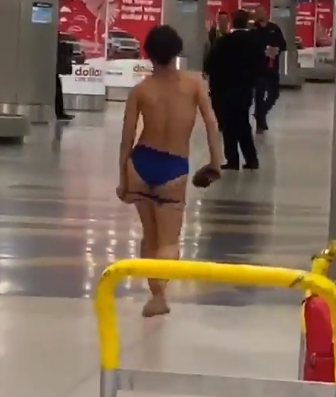 A second video shared to Twitter shows what happened after the woman was escorted out of the airport by security, according to CBS Miami.

In it, the impromptu stripper appears to have hopped onto the roof of a parked police vehicle.

She then leaps off of the vehicle and runs through traffic.

The 27-year-old woman was taken into custody Monday night for an involuntary mental health evaluation, the Miami Herald reported.

Police described her as “incoherent” and “delusional” when they eventually spoke to her.

Because the woman was taken in for a psychological evaluation, they said charges are not expected to be filed over the incident.