Fox News Flash top headlines for May 24 are here. Check out what’s clicking on Foxnews.com

A U.S. sailor who planned to give a journalist classified information about the Navy’s nuclear-powered warships and then defect to Russia, was recently sentenced to three years in prison, officials said Friday.

U.S. Navy Petty Officer 2nd Class Stephen Kellogg III pleaded guilty to two counts of espionage earlier this month and admitted to contacting Sevmash, a Russian shipbuilding enterprise. In an email to the ship maker, he wrote: “I am willing," the FBI said in a statement.

The 26-year-old also admitted to authorities that releasing the classified information could degrade the ability of nuclear-powered warships and cause injury to the United States, Jeff Houston of the Naval Criminal Investigative Service in an email to The Associated Press. As a nuclear electrician’s mate, Kellogg had access to information related to the capabilities, operations and maintenance of nuclear propulsion systems. 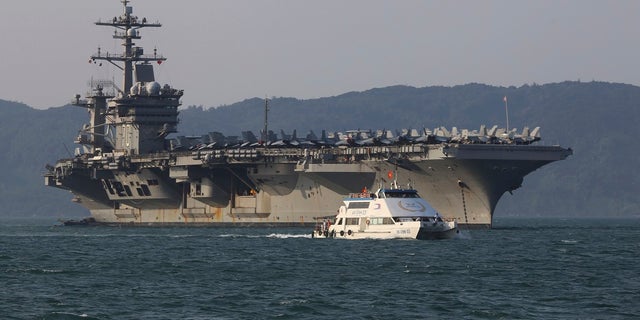 In this March 5, 2018, file photo, a Vietnamese passenger boat sails past U.S. aircraft carrier USS Carl Vinson as it docks in Danang bay, Vietnam. A U.S. sailor has pleaded guilty to espionage and sentenced to three years after admitting he took classified information about a Navy’s nuclear-powered warship and planned to give it to a journalist and then defect to Russia officials said Friday, (AP Photo/Hau Dinh, File)

Had the information became public, potential U.S. adversaries could have learned the capabilities and limitations of the United States’ nuclear-powered warships, a pre-trial statement said.

Authorities learned of the plot after Kellogg was arrested on Aug. 27 for drunken disorderly conduct at a San Diego airport where a Delta Airlines employee stopped him from boarding a flight to New York.

He was being belligerent and had purchased a one-way ticket to visit a high school friend who works as a journalist, telling him he had a big story, court documents said. Kellogg joined the Navy in 2014 and served on the U.S.S. Carl Vinson from 2016 to 2018.

In July and August 2018, Kellogg search online for flights to Moscow and contact information for the Russian Consulate in San Diego, the FBI said.

The FBI said Kellogg admitted to taking photographs of areas containing sensitive information about the Navy’s nuclear propulsion program on the ship. He then sent the photos to his father and girlfriend.

He will receive a reduction in rank and a dishonorable discharge, the FBI said.