Nearly three-quarters of coronavirus-infected people have NO symptoms on the day they are tested for the disease, government data reveals

Nearly three-quarters of coronavirus-infected people have no symptoms on the day they are tested for the disease, government data has revealed.

Only 28 per cent of people who tested positive for the disease in a random swabbing sample admitted to having any symptoms.

The other 72 per cent were completely unaware they were carrying the coronavirus, having reported no symptoms — which include a fever, cough or a loss of taste and smell.

The findings, published by the Office for National Statistics today, shed light on the severity of asymptomatic spread of the disease — people who unknowingly pass the disease around because they have no idea they are infected.

Several studies have shown asymptomatic transmission accounts for up to 80 per cent of Covid-19 spread. The new data is one of the largest studies, involving around 50,000 people.

The findings suggest the 1,000 Covid-19 cases being officially diagnosed each day in Britain account for just a fraction of the true number of infections, and the true tally is at least three times higher — in line with other estimates.

The findings also enforce the importance of contact tracing, which aims to rapidly quarantine all individuals who have been in touch with a confirmed case before they have the chance to spread the disease.

Other data from ONS today revealed Asian people are up to five times more likely to catch the coronavirus than white people. 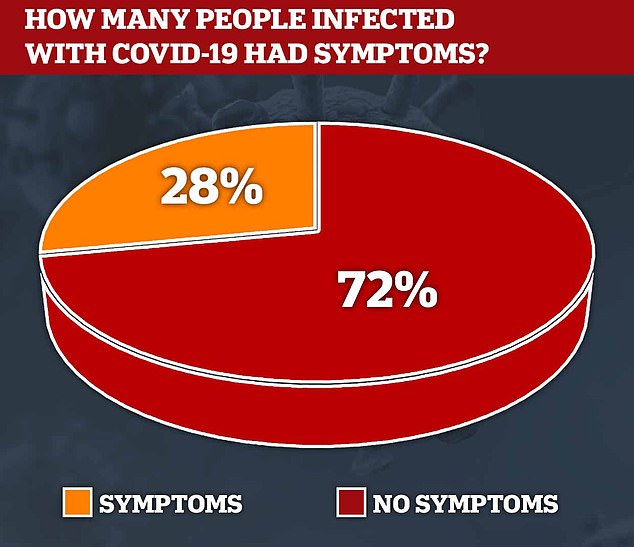 Only 28 per cent of people who tested positive for the disease in a random swabbing sample admitted to having any symptoms. The other 72 per cent were completely unaware they were carrying the coronavirus (pictured) 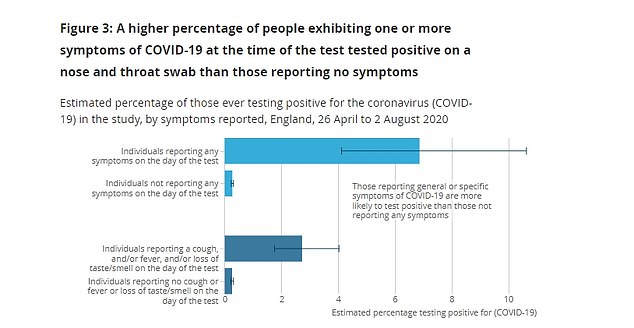 Participants in the ONS Coronavirus Infection Survey were tested with antigen tests, which can only tell a person if they have the virus currently.

Over the duration of the study, more than 195,000 swab tests have been carried out in a sample representative of the entire UK population.

The data today is based on swab tests undertaken in an eight-week period between 8 June to 2 August and does not cover care homes or hospitals.

The symptoms respondents were asked to report were fever, cough and loss of taste or loss of smell – the three ‘tell-tale’ signs of the virus.

They also were asked to report a shortness of breath, headache, nausea or vomiting, abdominal pain, diarrhoea, muscle ache, fatigue, or a sore throat.

Fewer than a third (28 per cent) of people who tested positive for the virus reported having any of the symptoms, ONS said.

Asian people are up to five times more likely to catch the coronavirus than white people, according to data from a government-run surveillance scheme.

An Office for National Statistics (ONS) report released today revealed seven out of 1,510 Brits identifying as Asian swabbed positive for Covid-19 — a rate of around 0.46 per cent.

For comparison, the rate was 0.12 per cent for white people. The ONS concluded the risk was slightly higher than the percentage difference and that Asians were 4.8 times more likely to test positive.

No cases were diagnosed in any other ethnic groups in England between June 8 and August 2, which is when the data relates to.

But the body claimed black Britons were twice as likely to be diagnosed, based on older figures.

Results of antibody tests — which tell if someone has had the disease in the past — showed a similar discrepancy between ethnicity, with just 4.8 per cent of white people testing positive for the substances. In comparison, the rate was around 10.8 per cent for Asians and 9.5 per cent for Black Britons.

Numerous reports have found black, Asian and minority ethnic (BAME) people in Britain face a higher risk of dying if they catch coronavirus than white people.

Experts can’t pinpoint exactly why this is the case, but it could be down to the fact ethnic minorities are more likely to be poor, use public transport more often and work in public-facing jobs – all three of which make them more prone to interacting with strangers and catching the disease.

Epidemiologists have previously told MailOnline that some communities which do not speak English as their first language were not following social distancing rules as stringently because public health messaging was not reaching them.

Professor Paul Hunter, an epidemiologist at the University of East Anglia, and Gabriel Scally, professor of public health at the university of Bristol, said there had been a ‘breakdown in communication’ and that ‘language barriers were certainly an issue’.

The rest (72 per cent) didn’t have any evidence of any symptoms at the time of their swab test, or at the subsequent tests later.

ONS said that the findings suggested that there was a ‘potentially large number’ of asymptomatic cases of the virus.

The report added that it is important to note that symptoms were self-reported rather than professionally diagnosed, so some people may have not noticed they were ill.

Only 165 people in the sample had tested positive, so the team cannot be entirely confident in their results because they were working with small numbers.

False positives, people without the disease who tested positive in error, could have an effect on the results, the ONS said.

But still, the researchers said the findings suggest at least 64 to 78 per cent of infected people did not have symptoms.

Commenting on the findings, Professor James Naismith, director of the Rosalind Franklin Institute at the University of Oxford, said: ‘This release is very informative.

‘It suggests around 70 per cent of infected people have had no symptoms. Whilst this is good news since for the vast majority Covid-19 is not a serious illness, it makes it much harder to spot its spread.’

Kevin McConway, an emeritus professor of applied statistics at the Open University, said: ‘The data do tend to indicate that being infected without having noticeable symptoms is likely to be common.’

The findings suggest thousands of infected Britons are not getting tested for Covid-19 because they are unaware they have it.

Although anyone can get a test on the NHS, it is unlikely they would come forward unless they either had symptoms that concerned them, or a friend, relative or colleague had been diagnosed, prompting a check.

Government surveillance schemes, such as that ran by ONS with the Department of Health, are the only way to dig deeper into understanding how many people in the UK have really been infected.

Separate data released by the ONS says that around 3,800 people are getting infected each day in England alone. Twenty-eight per cent of that figure is around 1,000 — which is roughly how many cases are being confirmed by the Department for Health each day.

Various studies have tried to work out how many cases of Covid-19 are silent, producing worryingly high estimates.

Evidence is starting to show transmission from asymptomatic and presymptomatic patients accounts for between 40 to 80 per cent of Covid-19 cases.

One comprehensive review of 17 studies concluded more than half of people infected with the coronavirus caught it from someone before they showed symptoms, known as presymptomatic.

It takes an average of six days before a person develops the tell-tale signs of Covid-19. But in those days prior to symptoms, patients are infectious and can still pass the deadly virus onto others.

Academics in Ireland said between 33 and 80 per cent of cases caught the virus from people who would have had no idea they were even infected.

They warned presymptomatic transmission alone can cause the virus to spread uncontrollably and ‘sustain an epidemic of its own’.

Controlling the spread of the virus between unsuspecting victims is crucial for keeping on top of the disease when lockdowns are eased, the team said.

It hinges on the success of contact tracing, which involves identifying all individuals who have been in close contact with a confirmed case.

Those people would in theory be isolated, even if they do not have symptoms, so it’s not possible for them to pass the virus on to others during the early stage of infection.