Is this Britain’s most festive village? Neighbours club together to transform more than 100 homes into a winter wonderland clad with 10,000 twinkling lights in tribute to grandfather who started the tradition

Neighbours have clubbed together to transform their entire village into a twinkling winter wonderland to raise thousands of pounds for charity this Christmas.

Homeowners in Haughton, Staffordshire, have been decorating their properties with festive lights after the tradition was started by village stalwart Bert Moore in 1984.

Mr Moore began adorning his home with Yuletide displays for his grandchildren but after he died last year, the whole village decided to get involved. 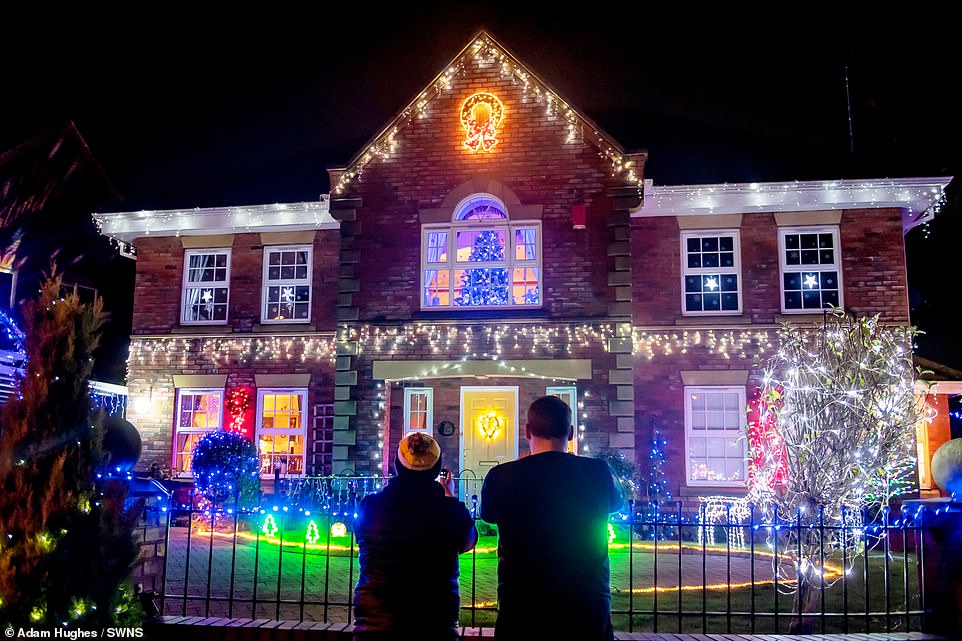 One property decorated the front of their house with bright white icicle lights, also covering the nearby tree and bush. They placed a lit-up Christmas tree and wreath in the top centre of the house, with stars in each of the upper floor windows 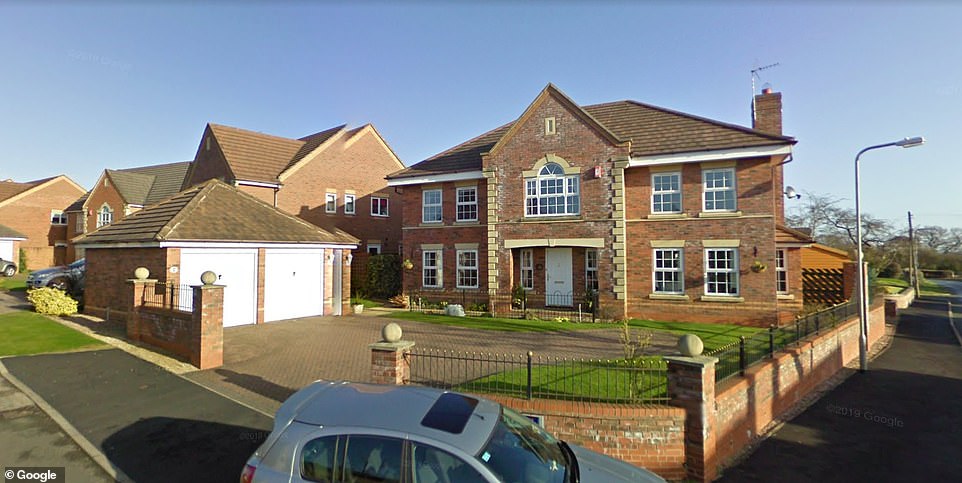 A before shot shows the same property in stark contrast in the daytime without any Christmas lights. Mike Allen, Chairman of Haughton Parish Council, said the tradition started ‘quite a few years ago’ 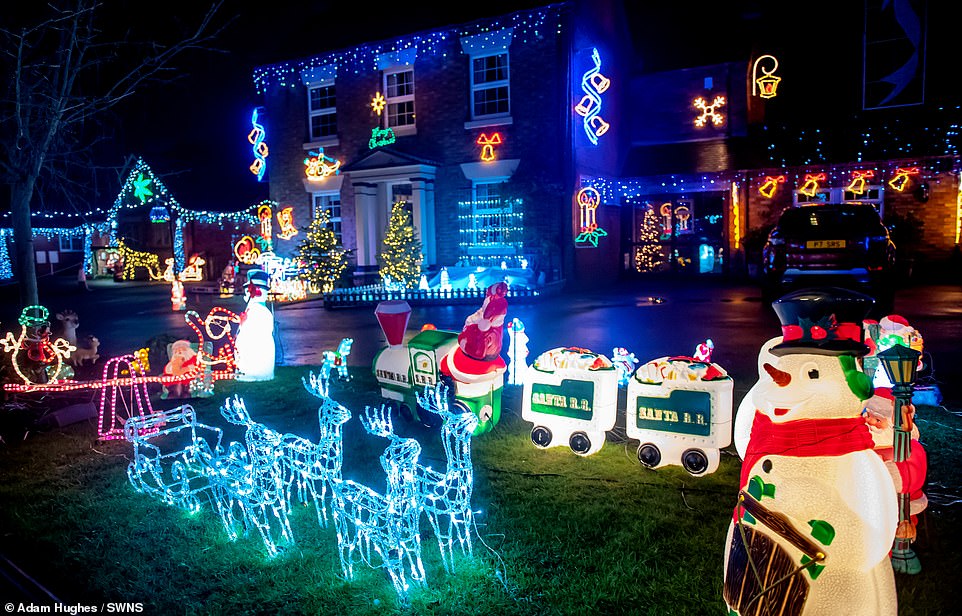 Another resident placed lit-up festive figures on their front lawn, including a snowman and a santa on a see-saw. They added two Christmas trees on either side of the front door, alongside numerous displays on the front of their house 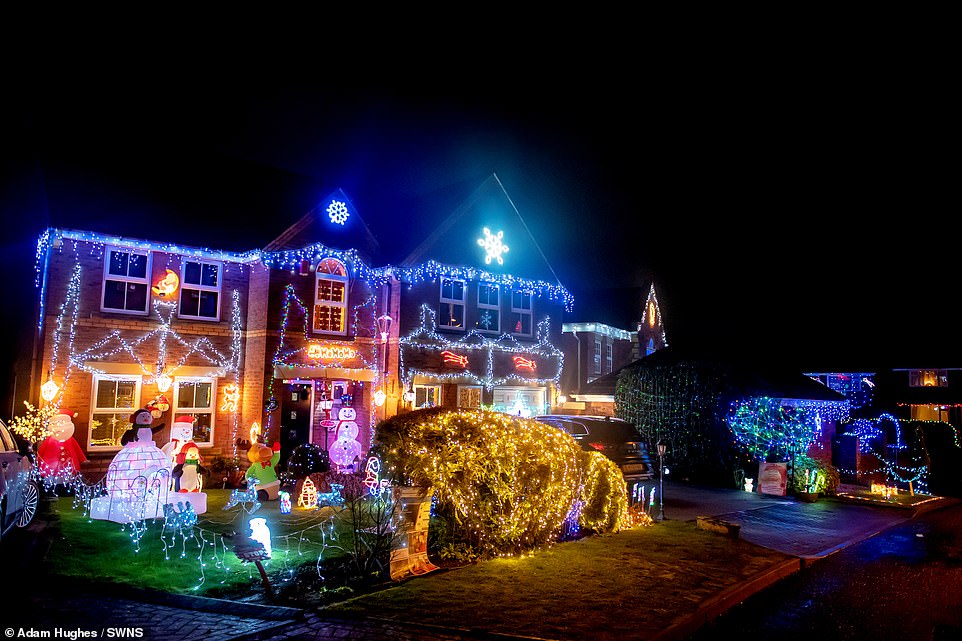 A bush covered in golden lights sits in front of two snowmen statues, two penguins, a Santa and a reindeer. Two snowflakes are attached to the triangular rooftop with more figurines and lights creating a pattern on front of the house 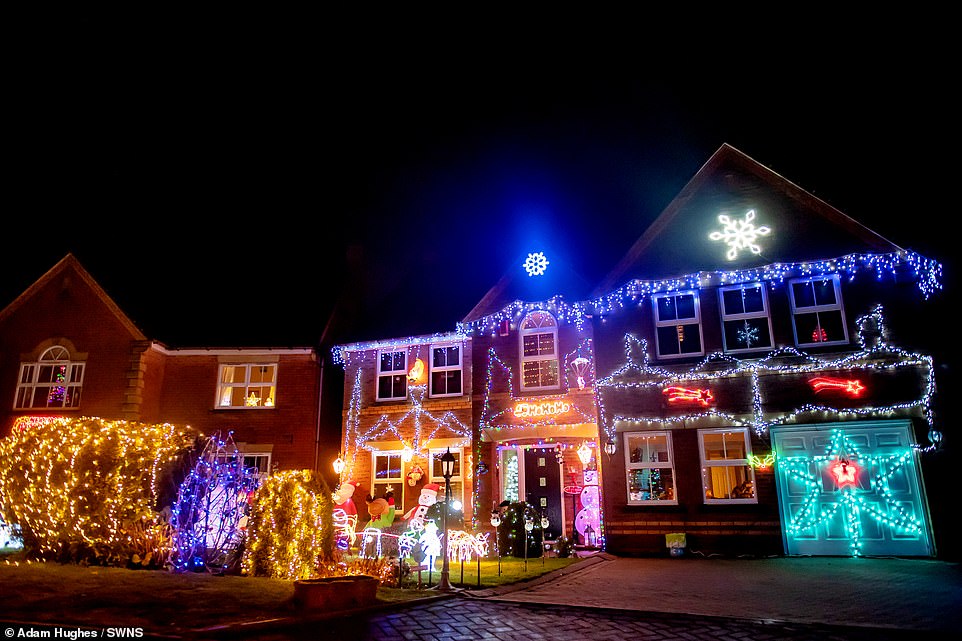 The same property from a different angle shows a large green star on the front of the garage door with a smaller red star inside it, and two shooting stars overhead. The lawn also has numerous snowmen lined in a row

This year, over 100 properties have spent thousands of pounds decking out their homes with glorious Christmas displays with around 10,000 lights in total.

Visitors have been flocking to the rural village to see the festive illuminations donating over £5,000 so far to several charities as well as the local church and school.

Father-of-two Paul Yeomans, 58, a carpenter, began decorating his house around 17 years ago when he was encouraged by Mr Moore, his next door neighbour.

The grandfather-of-one said: ‘We do it off our own backs. We look forward to putting the lights up. It’s a nice thing to do and more and more people are now involved. 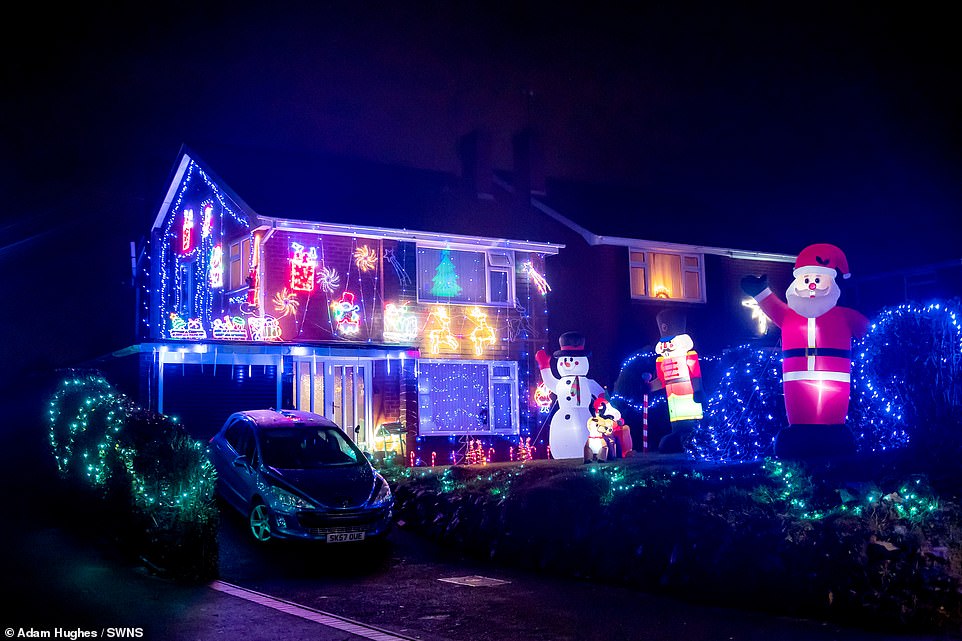 Three giant blow-up statues of a snowman, Santa and soldier adorn the hedge running alongside the front garden, with green lights placed on top of the nearby hedges. The house is lit up with Christmas figures and sleighs 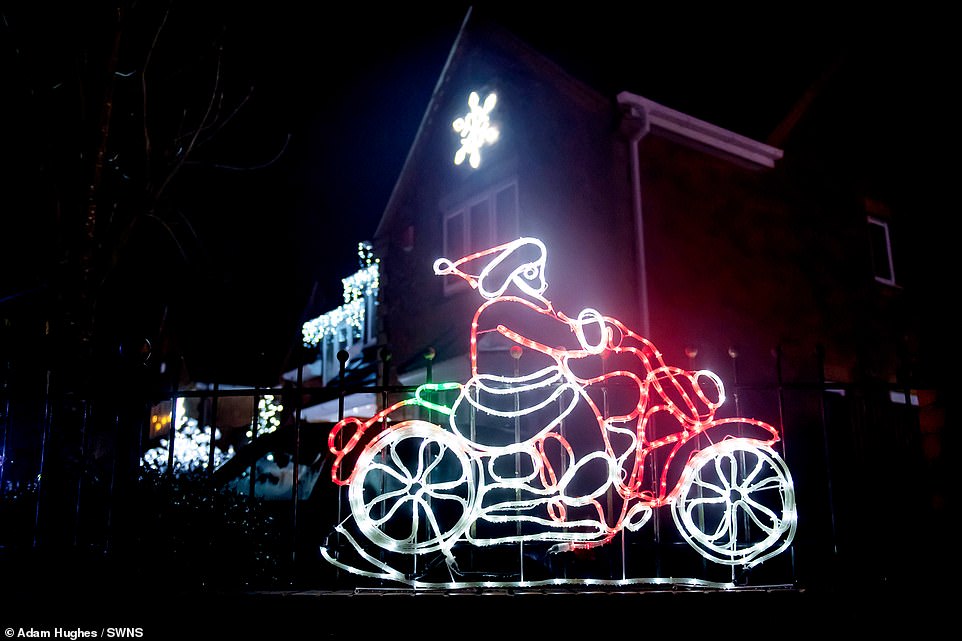 A close-up shot captures one of the lights in detail, showing a red Santa riding a white motorbike, with one of the decorated houses seen in the background 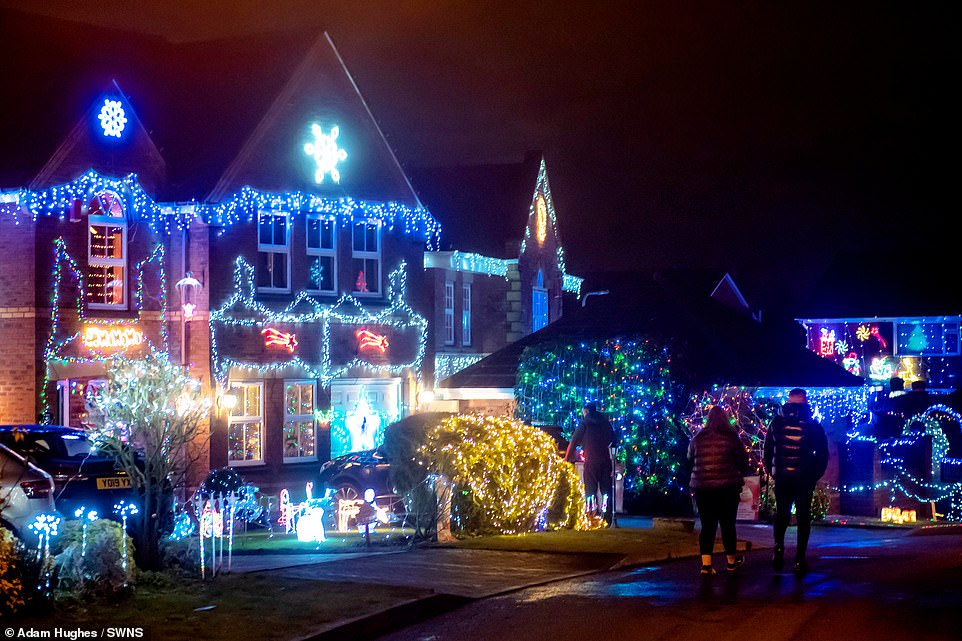 Visitors walk past and admire one of the dazzling properties. Sightseers have donated over £5,000 so far to several charities, the local church and school as part of the village wide Christmas lights display 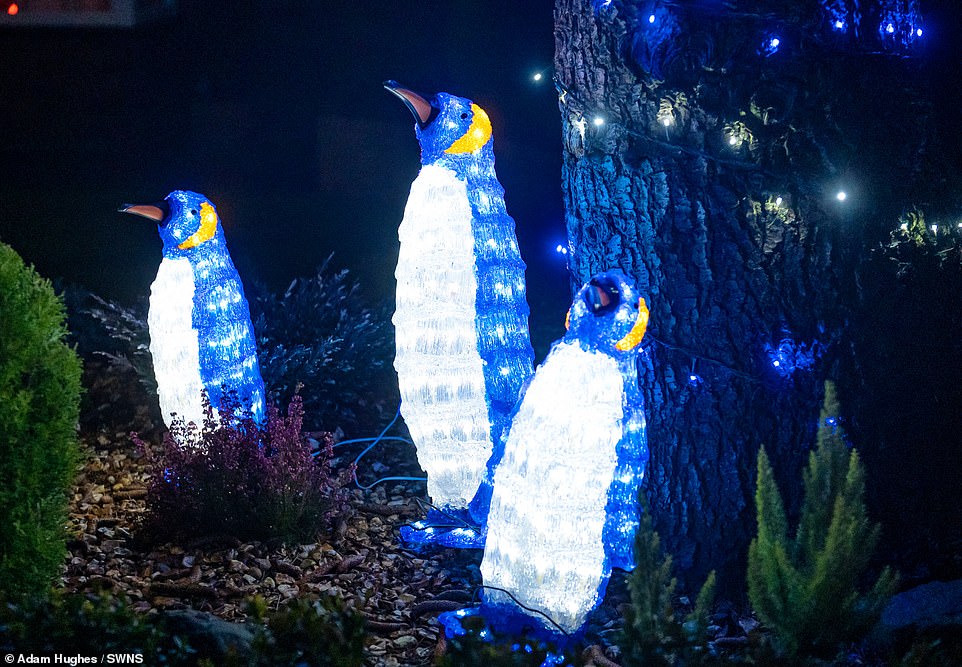 One large penguin and two smaller ones sit in front of a tree which is wrapped by twinkling blue lights. The festive lights tradition was started by Bert Moore, who died last year, for his grandchildren in 1984 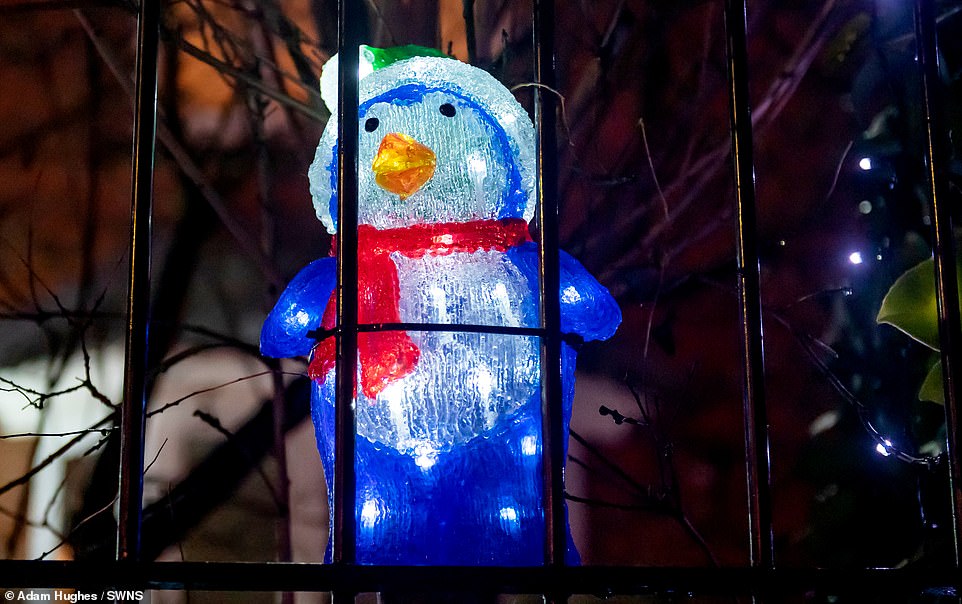 A blue and white penguin with a green Santa hat and red scarf is placed behind a property’s fence, attached by a zip tie. Father-of-two Paul Yeomans, 58, said the neighbours set up the lights display ‘in honour’ of Mr Moore

‘Every year we try and do something a bit different. This year, I have got a film screen in the window, bought a projector and downloaded Christmas clips from the internet.

‘The clips include Santa on his sleigh, looking through the window. It’s what the Americans are into. We have lights and stand-up figures. Santa, snowmen, Christmas bears, anything to do with Christmas really.

‘It all started when Bert gave me some lights and got me started. He helped me out to get started. Now we sort of do it in his honour. 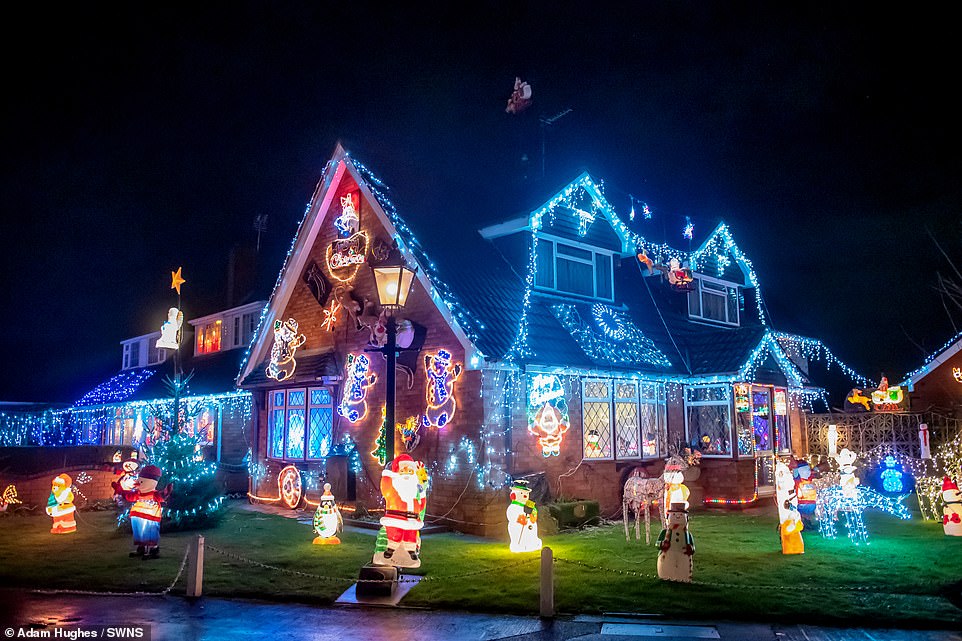 Similarly to other properties, one resident has placed over 10 Christmas figures on their lawn, decking out the top of their house and one of the side windows with bright blue lights, adding a sleigh to the top of their TV antenna 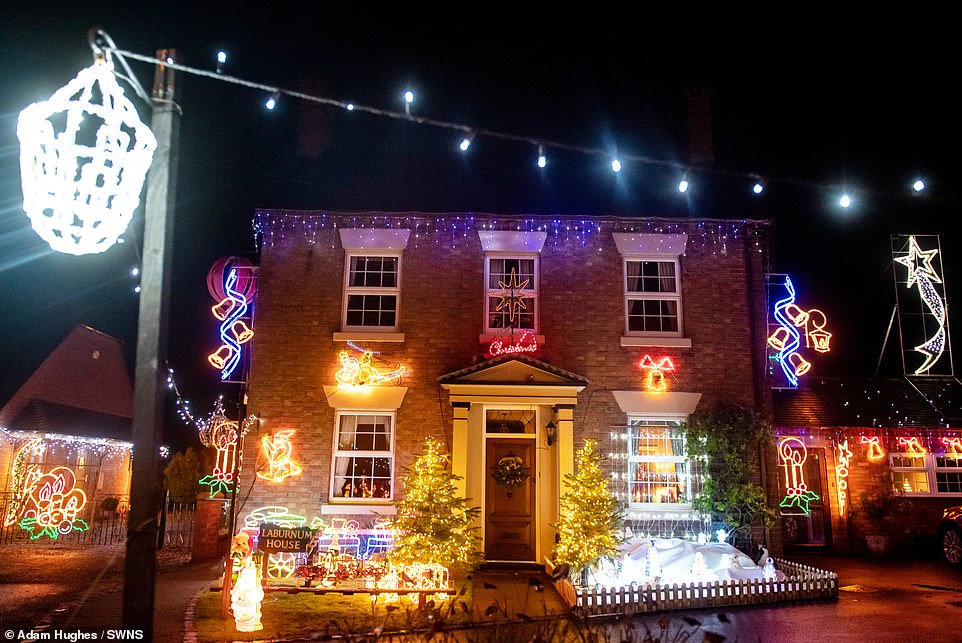 One property, Laburnum House, has two Christmas trees with golden lights erected outside their front door and a snow feature with small statues on the right 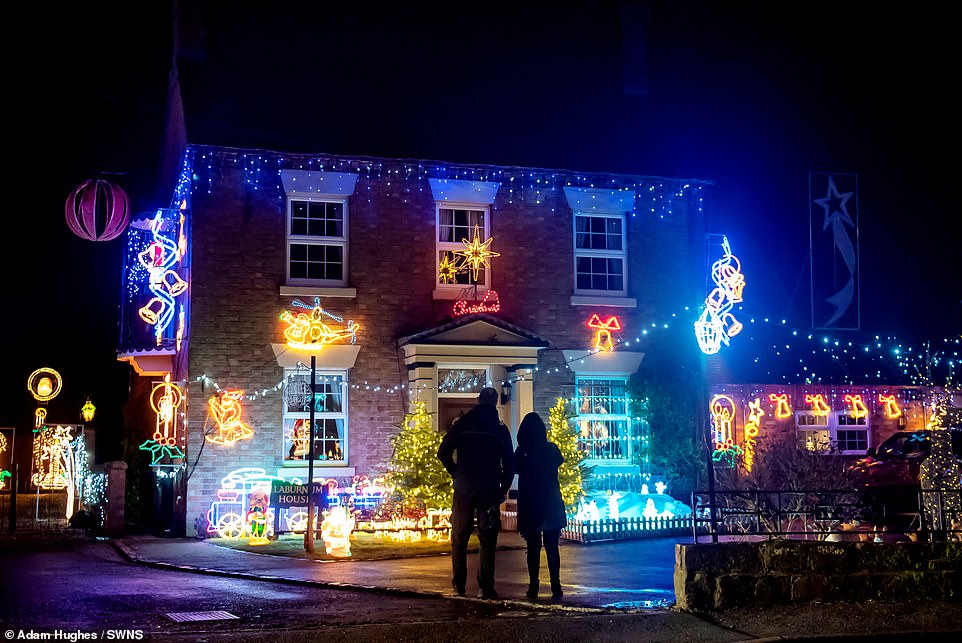 Two visitors admire the decorations, which include a lit-up Star of Nazareth and a helicopter being pulled along by Santa. Mother-of-four Jennifer Gordon, 39, said almost the ‘entire village’ is taking part in the display this year 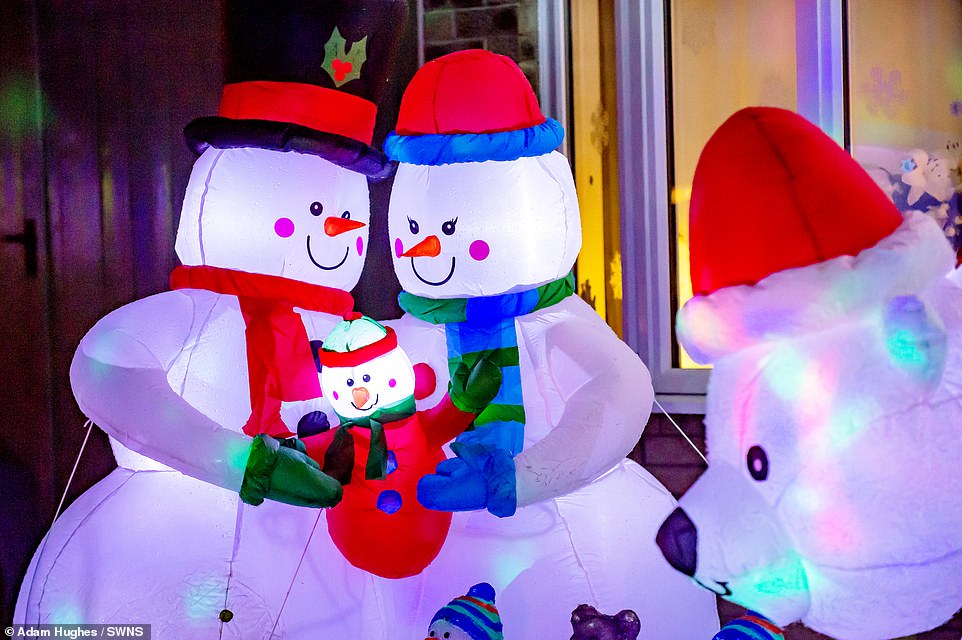 The picture shows two giant blown-up snowmen holding a smaller baby snowman. Ms Gordon, a teacher in the village, said the display started with just a ‘handful’ of houses before other neighbours joined in with the tradition

Mother-of-four Jennifer Gordon, 39, a teacher, added: ‘It started with a handful of houses but this year almost the entire village are doing it.

‘Bert loved doing up his house for Christmas so everyone thought it would be a nice thing to do in his memory while raising money for good causes.

‘Each house has at least 100 lights so you’re looking at around 10,000 lights. It is quite dazzling but I think it looks really impressive and gets you in the festive spirit.’

Mike Allen, Chairman of Haughton Parish Council, said: ‘It basically started quite a few years ago.

‘It was the late Burt Moore who started the tradition for his grandchildren – it snowballed and other people joined in with decorations on their houses. 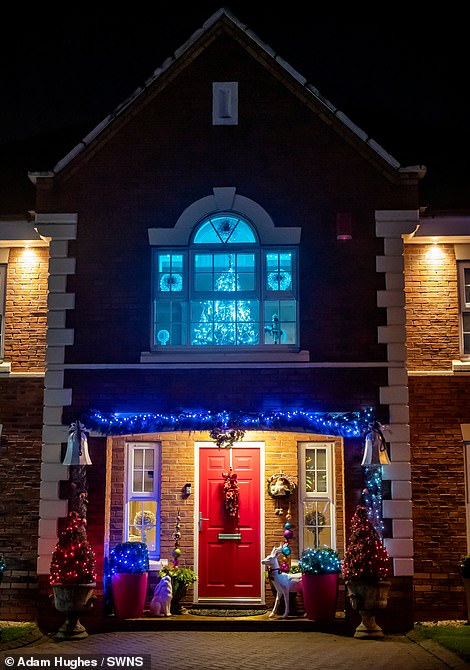 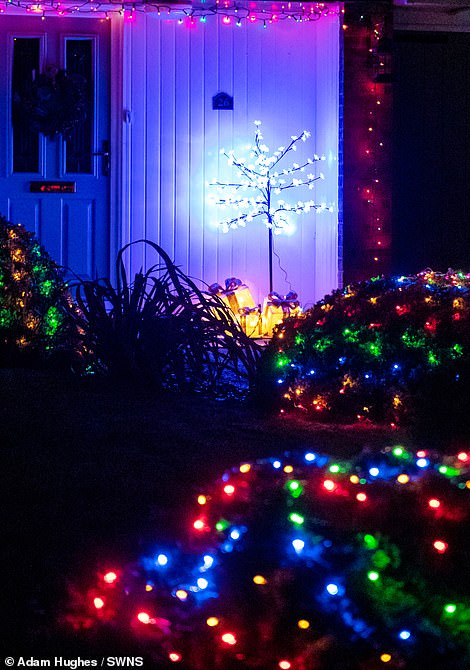 One property (left) has lined the entrance to their front door with blue lights and two large silver bells. A second property (right) has decorated their bushes in multi-coloured lights and placed lit-up present statues under a small tree 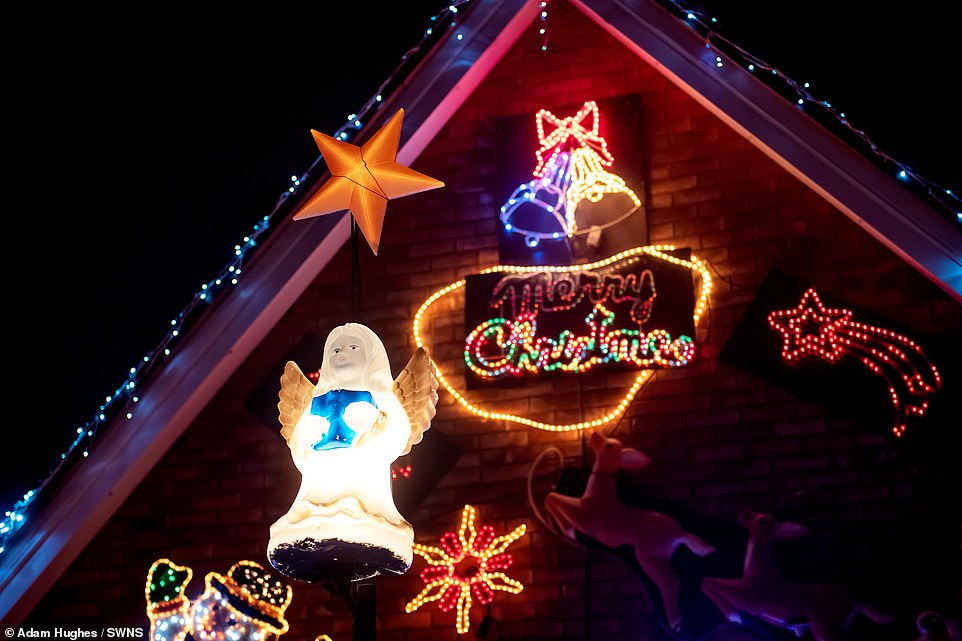 A close-up shot shows a lit-up angel figure with a star attached overheard, and a ‘Merry Christmas’ sign in the background. The lights will be on display until January 1 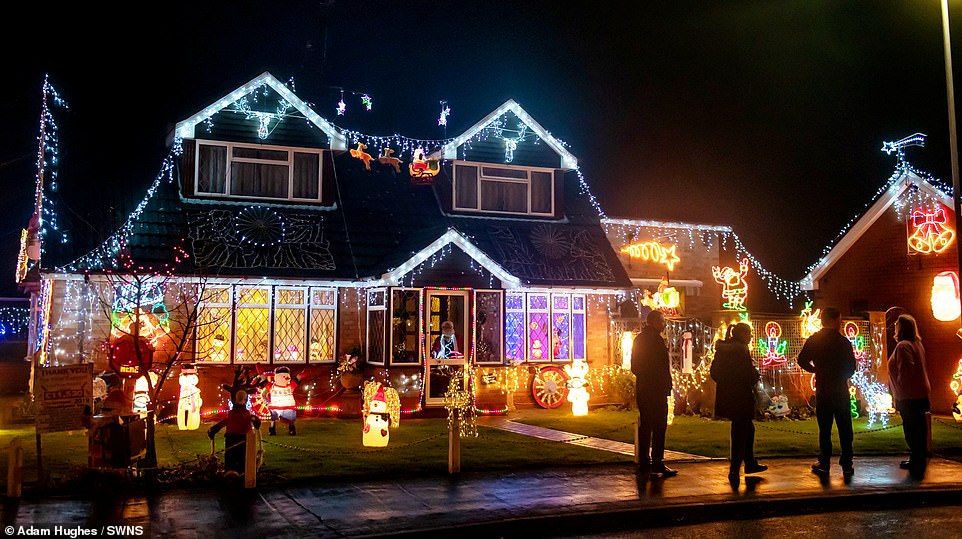 Four visitors marvel at the street, which has been turned into a twinkling winter wonderland. Money raised from the lights will be split between the Midlands Air Ambulance, Katherine House Hospice and the MS Society 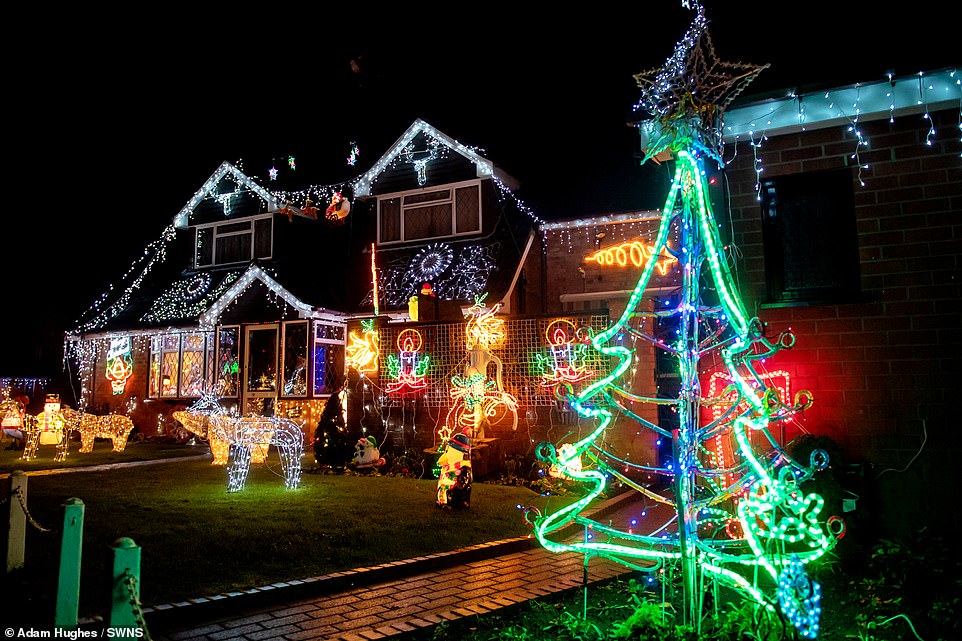 One of the residents has golden polar bear statues and a lit-up bright green Christmas tree included in their display. Each house has at least 100 lights, adding up to approximately 10,000 in total 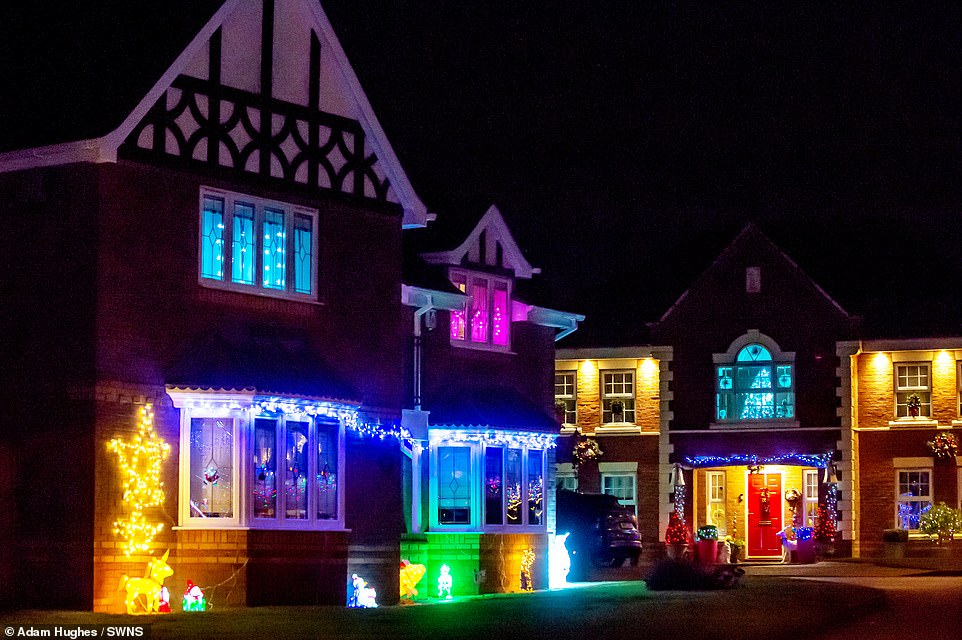 Numerous neighbours have lit up the inside of their homes as well as the outside, with one property having two bright blue and pink windows on their upper floor, and another with a blue-glowing Christmas tree placed in the top centre

‘It caught on so most people alongside the main road and now down the side roads decorate their houses and it really has gathered momentum. Sadly we lost Burt last year but the tradition has carried on which he started.

‘A lot of people come to see the lights and there is a collection box if anyone wishes to give a donation.

The lights will be on display until January 1 and any money raised will be split between the Midlands Air Ambulance, Katherine House Hospice and the MS Society.