Jerusalem: Benny Gantz, the centrist former army chief battling to depose Prime Minister Benjamin Netanyahu of Israel, on Sunday won the endorsements of a narrow majority of lawmakers, earning him a fresh chance to form a government and break Israel's yearlong political deadlock.

The surprise majority for Gantz, 60, who earned the backing both of Arab lawmakers often accused of sympathising with terrorists and from ultranationalist lawmakers often called rabidly anti-Arab, puts him in a stronger-than-expected position to try to pry loose Netanyahu's 11-year grip on power. 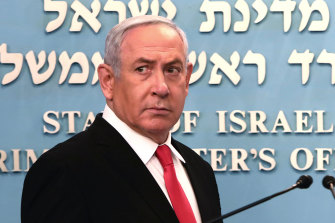 Prime Minister Benjamin Netanyahu at his Saturday announcement of a coronavirus lockdown.Credit:AP

Israel's President, Reuven Rivlin, said he would formally assign Gantz, of the Blue and White party, the mandate to form a government at midday Monday.

But Rivlin also summoned Gantz and Netanyahu, 70, to his residence Sunday night for an "urgent conversation" about the possibility of bringing their parties together in a national unity government to contend with the emergency posed by the coronavirus pandemic. After about 90 minutes, Gantz and Netanyahu emerged and promised that their aides would continue the talks.

The momentous goings-on came on an extraordinarily tumultuous day. With much of the country grinding to a halt or stuck at home, Israeli citizens were still absorbing news of draconian measures that Netanyahu's caretaker government was considering to fight the virus, including an idea to deploy secret surveillance tools now used to hunt terrorists to identify people who should be quarantined.

Then, early Sunday, came word that the court system had been effectively shut down in a middle-of-the-night decree by Netanyahu's hand-picked justice minister, and that, a few hours later, Netanyahu's criminal trial on bribery and other corruption charges, which was set to open Tuesday, had been pushed off at least until late May.

The unexpected postponement set off a wave of criticism from Netanyahu's opponents. "We have the Italian mafia here, and how," Yariv Oppenheimer, a former director of Peace Now, wrote on Twitter.

"Courts and parliamentary operations must not be suspended, even in emergencies," said Nitzan Horowitz, leader of the left-wing Meretz party.

Netanyahu, Israel's longest-serving premier, is accused of bribery, fraud and breach of trust in three cases in which prosecutors say he traded lucrative official favours with Israeli media tycoons who rewarded him with expensive gifts and with obsequiously positive news coverage.

He failed on March 2 to win a new term outright after he again fell short of a majority in parliamentary elections, the third inconclusive ballot in less than a year.

Anti-Netanyahu forces led by Gantz won a slim majority in Parliament, but until a government is formed, Netanyahu's holdover coalition of right-wing and religious parties remains in charge.

But the caretaker government is wanting for public legitimacy, a problem that has become critical as Netanyahu has ordered drastic action to curtail the routines of daily life in response to the coronavirus.

As Israel's coronavirus caseload topped 200 Sunday morning, the government ordered the closing of all leisure venues, including cafes, restaurants, gyms, day care centres and cultural institutions. Public gatherings are limited to 10 people, and workers must work from home if possible. Netanyahu tested negative for the virus Sunday, officials said.

In a first, all 15 members of the combined slate of predominantly Arab parties, the Joint List, joined lawmakers from several Jewish parties in recommending Gantz to Rivlin.

Leaving the president's residence Sunday, Ayman Odeh, the Joint List's leader, said it had recommended Gantz in part out of concern for Israeli democracy. "We see fascism in the regime," he told reporters, "not in the society, but in the one who heads the government, Benjamin Netanyahu."

Among the Jewish parties backing Gantz was the seven-seat, ultranationalist party Yisrael Beiteinu, led by Avigdor Liberman, a onetime ally of Netanyahu who has made it his mission to end the prime minister's career.

Both Liberman and leaders of the Joint List had kept their intentions in doubt right up until their meetings with Rivlin.

The most surprising support for Gantz came from the three lawmakers belonging to Balad, an Arab-nationalist faction in the Joint List that opposes the idea of Israel as a Jewish state. Mtanes Shehadeh, the party's leader, said Balad had initially planned to abstain from recommending Gantz, but endorsed him "in order to topple the leadership of the largest generators of incitement against the Arab society and its leadership."

Gantz remains a great distance away from ousting Netanyahu. His ability to play hardball politics is constrained by the virus emergency and by an almost universal public aversion to a fourth election. And he will need to hold together his motley collection of supporters, who are anything but natural allies, in the face of an anticipated onslaught from Netanyahu and his defenders.

Still, in contrast to last fall, when he and Netanyahu each took a turn trying to form a government without success, Gantz holds important new advantages.

Crucially, he now has the backing of an absolute parliamentary majority, however thin. That gives Gantz the initiative, and his supporters say Netanyahu will have to either acquiesce to Gantz becoming prime minister or stand in the way — at a time when the public health emergency has created grave political risks for any lawmaker seen as obstructing the response to it.

Moreover, the funding crunch that is being felt by recipients of government largesse after more than a year without a national budget could eventually encourage even some of Netanyahu's staunchest allies — the ultra-Orthodox parties, whose constituents rely heavily on such benefits — to relent, supporters of Gantz said.

Gantz is said to prefer a unity government under his leadership in which Blue and White is joined by Netanyahu's secular, right-of-centre Likud party. The two parties, Israel's largest, would enjoy a healthy 69-seat majority in Parliament and, polls show, broad popular support. But Likud has adamantly rejected the idea until now, insisting that Netanyahu continue as prime minister in any deal.

With Rivlin assigning Gantz the mandate, however, Blue and White on Sunday signalled its intent to force a vote on a new speaker of Parliament, a key office now held by Netanyahu's Likud party. That would free Blue and White to appoint committee leaders and get Parliament up and running again, among other things to provide oversight to the Netanyahu government's response to the virus.

A new speaker would also allow Blue and White to control the legislative process — which could help it pressure Likud, for example by advancing legislation to impose term limits or other measures that could prevent Netanyahu from running if a fourth election becomes necessary.

The Joint List's endorsement of Gantz aside, Arab lawmakers are not about to join a new Israeli government: They are loath to share responsibility for the Israeli occupation of the West Bank or for future military action against their fellow Palestinians in Gaza, among other things.

But the prospect that the Joint List could side with Gantz in potential no-confidence votes, as Arab parties did for Yitzhak Rabin in the 1990s, could be helpful to Gantz in negotiating with other potential coalition partners.

For his part, Netanyahu worked feverishly Sunday to bolster his chances of holding on.

Shortly before the start of the party leaders' consultations with Rivlin, he announced that he had again asked Gantz to "join a national emergency government headed by me." He said he had proposed to lead such a government for two years and then to allow Gantz to take over as prime minister.

But opponents of Netanyahu have spurned his previous overtures about such a rotation agreement on the grounds that they do not believe he would keep a promise to step aside.

Gantz responded witheringly to the idea. "Netanyahu, let's not manipulate the public," he wrote on Twitter. "If you're interested in unity, why postpone your trial at 1 a.m. and send an 'emergency unity' outline to the press, instead of sending your negotiating team to a meeting? Unlike you, I will continue to support every appropriate governmental measure, leaving political considerations aside. When you get serious, we can talk."

Even before the postponement of Netanyahu's criminal trial, his opponents had accused him of exploiting the pandemic to consolidate his power and to try to force the establishment of a national unity government with himself at its head.

"Everyone who criticised us when we warned that we were turning into Erdogan's Turkey should acknowledge and internalise the cynical exploitation of the coronavirus crisis for the personal political interests of a defendant before a trial," Moshe Yaalon, another former army chief who is a leader of Gantz's party, wrote on Twitter just before midnight Saturday.

After the shutdown of the court system, Yaalon added: "Blue and White has enlisted to eradicate the coronavirus, unconditionally and without political interests. Blue and White cannot be complicit in the elimination of democracy in our country by a defendant running away from justice."