Netflix has announced that it is launching an Exploding Kittens mobile game and TV series, in a first-of-its-kind deal.

Exploding Kittens is a hugely popular card game that came out in 2015 and tasks players with tricking their friends into ‘blowing up’.

‘The co-development of a game and animated series breaks new ground for Netflix,’ said Mike Moon, Head of Adult Animation at Netflix.

‘And we couldn’t think of a better game to build a universe around than Exploding Kittens, one of the most inventive, iconic and original games of this century!’

The news comes shortly after Netflix announced that it was venturing into gaming, with the launch of five free mobile games for its subscribers. 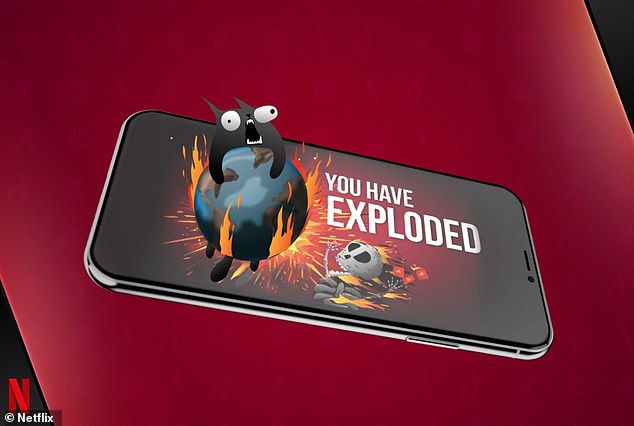 Netflix has announced that it is launching an Exploding Kittens mobile game and TV series at the same time, in a first-of-its-kind deal

Netflix’s mobile games and how to play them

All you need to access them is a Netflix subscription — there’s no ads, no additional fees and no in-app purchases.

The games can be seen through Netflix’s Android and iOS apps, which will then direct you to a download link in the Google Play Store or App Store.

While some mobile games may require an internet connection, others will be available to play offline. They are not available on Netflix profiles for children.

Exploding Kittens – The Game will launch on Netflix in May, followed by an adult animated comedy series next year, starring Tom Ellis, Abraham Lim and Lucy Liu.

The mobile game – which can be played as a single player or with multiple players – will task players with drawing virtual cards, while trying to avoid Exploding Kitten cards.

However, unlike the original card game, players will be able to access two new exclusive cards on the mobile game.

The Radar card will reveal to players the position of the Exploding Kitten card closest to the top of the deck, while Flip Flop will reverse the order of the cards in the deck.

Meanwhile, the animated series from showrunners Shane Kosakowski and Matthew Inman will feature God and the Devil being sent to Earth in the bodies of house cats.

‘Our goal is to offer our members great entertainment they’ll love in whatever format they may enjoy – whether it be a game or an animated series,’ said Leanne Loombe, Head of External Games at Netflix.

‘As we expand our mobile games catalog, we’re excited to partner with the Exploding Kittens digital team to bring this enjoyable game to all age groups, including a few exciting updates exclusively for our members.’

‘While this is just the beginning of a long journey, we’re excited to provide a gaming experience that is differentiated from what is available today — exclusive mobile games with no ads, no in-app payments, included with your Netflix membership,’ it explained at the time.

Market research by Kantar revealed today that more than 1.5 million subscription services were cancelled in the first three months of the year, with more than half a million of these due to ‘money saving’.

Netflix’s recent price hike – the second in a space of a year – has likely put many subscribers off.

The decision to hike prices again sparked backlash from some users.

One Twitter user said: ‘I’m about to cancel my Netflix. It’s not even that good for them to keep raising the price.’

Another added: ‘It’ll be Netflix or chill for many households. The cost of living is getting out of hand.’

THE HISTORY OF NETFLIX PRICE HIKES IN THE UK

May 2014: Netflix announced an increase in its monthly fee for streaming movies and television shows from £5.99 to £6.99.

The price hike was immediate for new subscribers but was delayed for two years for its existing members.

But Netflix allowed subscribers to keep paying £5.99 a month if they opt for a lower-resolution ‘SD’ quality service.

A similar price change took place for US customers, who saw their subscription fee increase by $2 (around £1.40 at the time).

Anyone who signed up to Netflix when it launched in Britain would have received the standard package for £5.99 per month.

But in an email to subscribers Netflix wrote: ‘When we raised prices for new Netflix members in 2014, we kept your price the same for two years. Your special pricing is now ending and your new price will be £7.49 per month.’

October 2017: The company raised prices in both the UK and US for the first time in two years.

The standard package price increase by 50p to £7.99 per month.

Netflix said at the time that the price change reflected the additional content added to its service.

May 2019: Netflix confirms that British customers will see the price of the standard tarriff increase from £7.99 to £8.99.

January 2021: Netflix hikes subscription fees for UK users as the country entered its third lockdown amid the coronavirus pandemic.

March 2022: Netflix increases prices for the second time in just over a year.