Network Rail has removed an ‘I love JK Rowling’ poster from Edinburgh Waverley station for being ‘too political’ in the wake of the author’s trans comments.

The £1,200 design was paid for and put up by Kellie-Jay Keen-Minshull, who has campaigned against the reform of gender recognition laws, on Monday.

But the poster was taken down by the railway owner’s Scotland wing for going against their ‘code of acceptance’ which ‘does not allow advertising that is likely to support or promote one view point over another’.

It comes after the Harry Potter author expressed ‘deep concerns’ about transgender activism in an essay last month, in which she described being a victim of domestic violence and sexual assault. 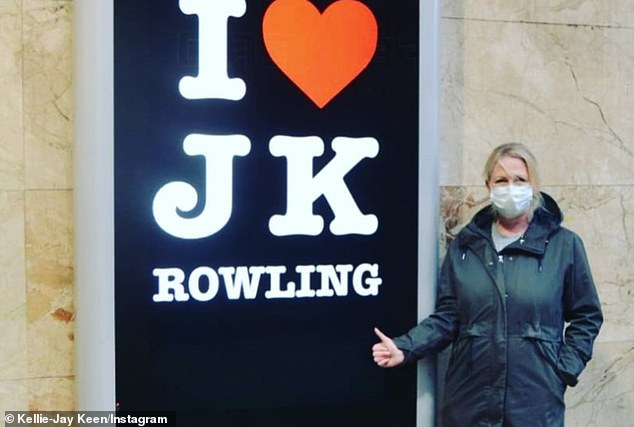 The poster, which reads ‘I love JK Rowling’. It cost £1,200 and was paid for and erected by Kellie-Jay Keen-Minshull, who has campaigned against the reform of gender recognition laws

In response to a tweet, Network Rail Scotland posted: ‘This advert is no longer being displayed of Edinburgh Waverley.

‘The poster in question is against our code of acceptance for advertising in our stations owing to its political nature.

‘We do not allow advertising that is likely to support or promote one viewpoint over another.’

Speaking on her YouTube channel earlier this week, Ms Keen-Minshull announced she had put up a billboard at the station and said she was ‘very pleased with it’. 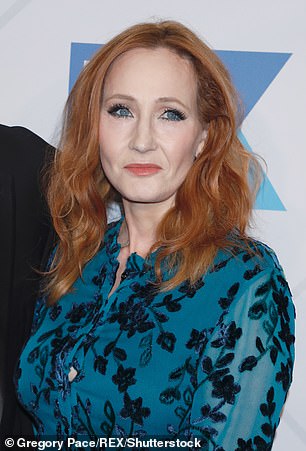 Ms Rowling, 54, had first clashed with gender activists after appearing to ‘like’ a post on Twitter saying that trans women are ‘men in dresses’, which she said was an accident.

Then last year she faced backlash after defending a female researcher who was fired for claiming that ‘men cannot change into women’.

Last month, she made a jibe at an article titled ‘Creating a more equal post-Covid-19 world for people who menstruate’.

She tweeted: ‘I’m sure there used to be a word for those people. Someone help me out. Wumben? Wimpund? Woomud?’

A handful of staff at publishers Hachette involved in her new children’s book, The Ickabog, also staged a rebellion.

The Blair Partnership has said it could not compromise on the ‘fundamental freedom’ of allowing authors the right to express their thoughts and beliefs. 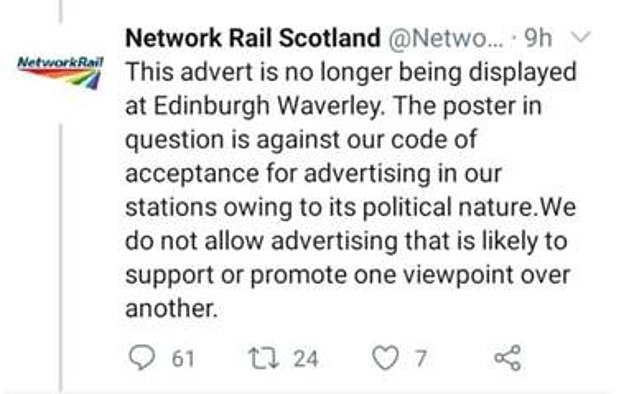 The tweet from Network Rail Scotland, in which the railway owner said the poster went against their ‘code of acceptance’ for advertising in train stations

The writer stood by her tweet as she later insisted: ‘If sex isn’t real, there’s no same-sex attraction.

‘If sex isn’t real, the lived reality of women globally is erased. I know and love trans people, but erasing the concept of sex removes the ability of many to meaningfully discuss their lives. It isn’t hate to speak the truth.’

The media personality seemingly denied claims of transphobia as she insisted she ‘respects every trans person’s right to live any way that feels authentic and comfortable to them.’