Upper Lake, California: Firefighters struggling to contain destructive Northern California wildfires have found themselves facing a new blaze that erupted on Tuesday and drove through a rural area near a national forest. 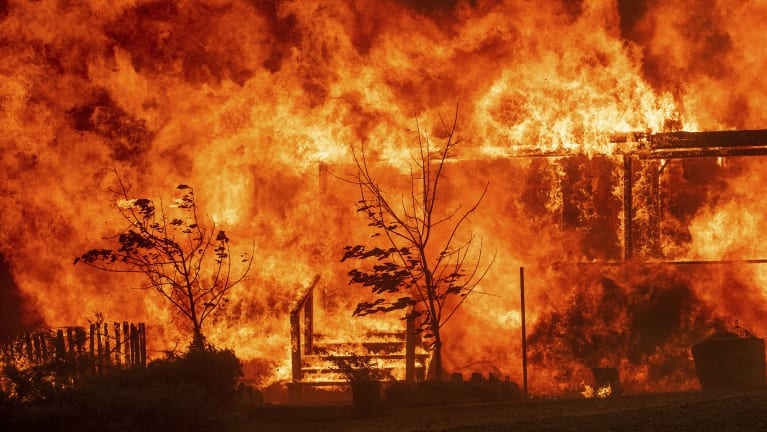 Flames consume a home as the River Fire tears though Lakeport, California on Tuesday.

About 60 homes in an old ranching and farming area near Covelo, 290 kilometres north of San Francisco, were ordered evacuated as the blaze erupted late in the afternoon. Gusty winds quickly drove it through about a square mile of brush and grasslands, oak, pine and timber near Mendocino National Forest, Mendocino County Undersheriff Matthew Kendall said.

"We're advised that the fire was threatening structures," he said.

Firefighting aircraft were called in but it was unclear when they might arrive because many already were engaged in other fires, Kendall said.

Some 64 kilometres to the south, twin fires straddling Mendocino and Lake counties have destroyed at least seven homes and threatened an estimated 12,000 more, fire officials said. 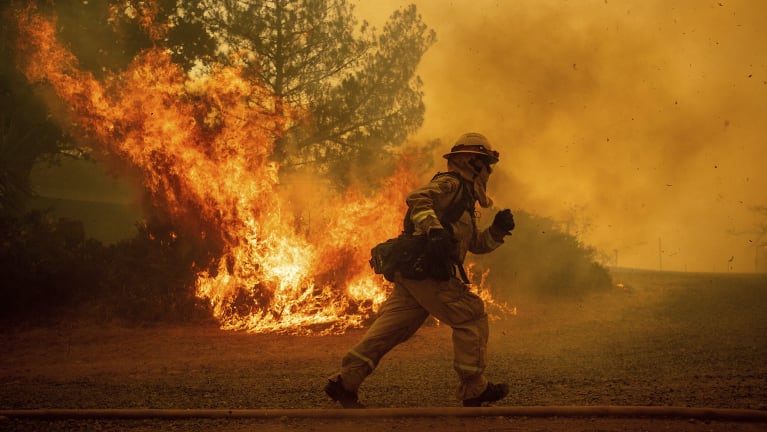 A firefighter runs while trying to save a home as a wildfire tears through Lakeport, California.

Jessyca Lytle fled a fast-moving Northern California wildfire in 2015 that spared her property but destroyed her mother's memorabilia-filled home in rural and rugged Lake County.

Less than three years later, Lytle found herself listening to scanner traffic and fire-proofing her mother's new home as another wildfire advanced.

"Honestly, what I'm thinking right now is I just want this to end," Lytle said, adding that she was "exhausted in every way possible – physically, emotionally, all of that."

Derek Hawthorne, a firefighter and spokesman for the fire crews, said the hot weather was not ideal but the wind was on their side where he was in the city of Upper Lake.

"It's blowing into the fire, and it's kind of blowing it back on itself," he said.

Elsewhere, the Carr fire had burnt more than 880 homes and killed six people in and around Redding. Another 348 outbuildings were also destroyed, and the blaze is now the seventh most destructive wildfire in California history, fire officials said.

National Park officials said on Tuesday the scenic Yosemite Valley and other areas would be closed "at least through Sunday" due to heavy smoke from the so-called Ferguson Fire. The closure began July 25 and had been tentatively scheduled to end Friday.

It was the longest closure at Yosemite since 1997 when floods closed the park for over two months.

People in Lake County, an impoverished community of 65,000, are familiar with evacuations.

The 2015 Valley Fire, which came on the heels of two other fires, killed four and destroyed 1,300 homes when it blew up unexpectedly during a September heat wave. It wiped out entire neighborhoods prized for their privacy and sense of community and turned scenic areas into charred forest.

Since then, parts of the county have been evacuated regularly due to fire, most recently in June.

Evacuation orders remained in effect Tuesday for the town of Lakeport, the county seat, although orders for some smaller communities were lifted.

Lakeport is a popular destination for bass anglers and boaters on the shores of Clear Lake. By Monday night, it was a ghost town.

Paul Lew and his two boys, ages 13 and 16, evacuated Saturday from their Lakeport home.

"I told them to throw everything they care about in the back of the car," said Lew, 45. "I grabbed computers, cellphones, papers. I just started bagging all my paperwork up, clothes, my guitars."

Lew, who is divorced from Lytle, is camped out at the house in the nearby community of Cobb that she fled in 2015. He is watching over her chickens, sheep and other animals. He laughs that repeated fire alerts have made him an emergency preparation expert.