Three months after a fire ravaged Notre-Dame cathedral in Paris, a rare glimpse inside the burned masterpiece on Wednesday revealed it to be eerily empty and with rubble still littering the nave.

Journalists were on Wednesday given unprecedented access during a tour around the inside of the 850-year-old World Heritage landmark.

Just three months ago, it would have been packed with worshippers and tourists admiring the Gothic architecture and famed stained-glass windows, which emerged largely unscathed from the inferno.

On Wednesday, instead of crowds, only a few dozen specialist workers wearing white protective overalls, hard hats and masks could be seen carrying out painstaking work to make the building safe. 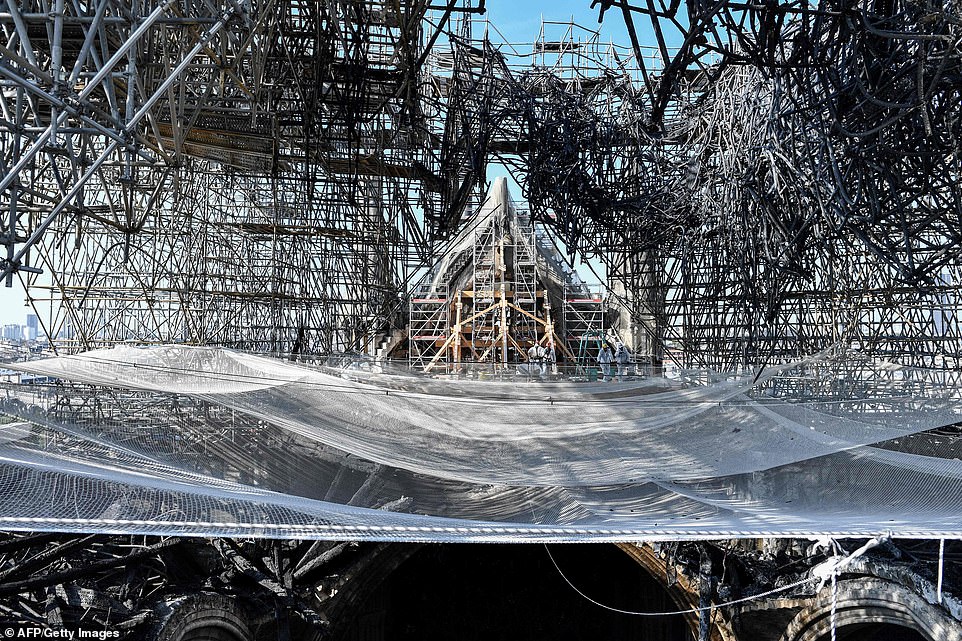 Journalists and photographers were given unprecedented access to Notre Dame cathedral on Wednesday and the cleanup continues three months after a fire which destroyed the roof and a wooden spire (pictured, where the spire would have been) 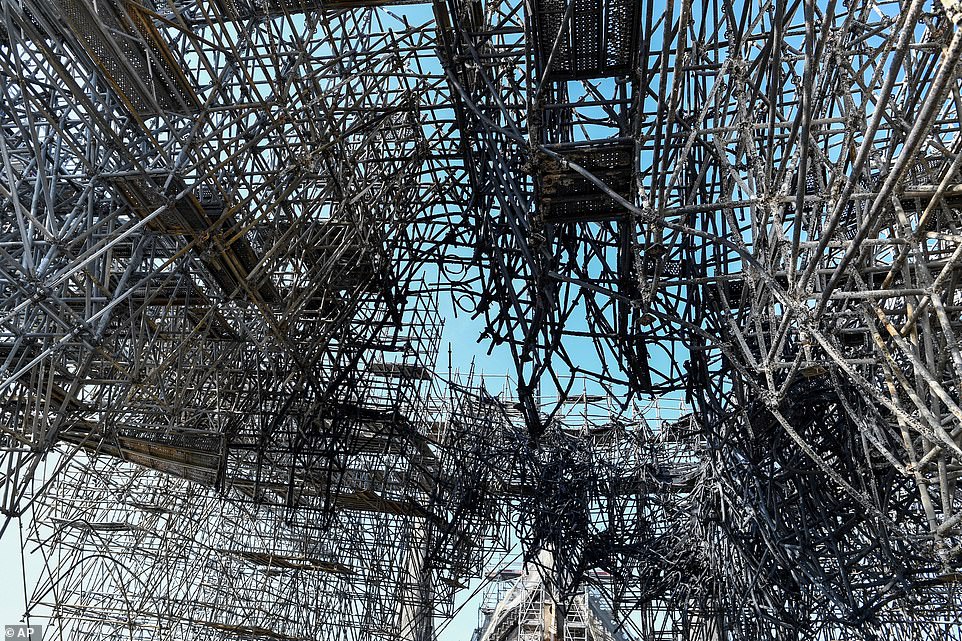 The cause of the fire, which happened during restoration work, is still unknown and researchers are sifting through every piece of rubble to try and decipher the puzzle (pictured, twisted scaffolding left behind after the blaze) 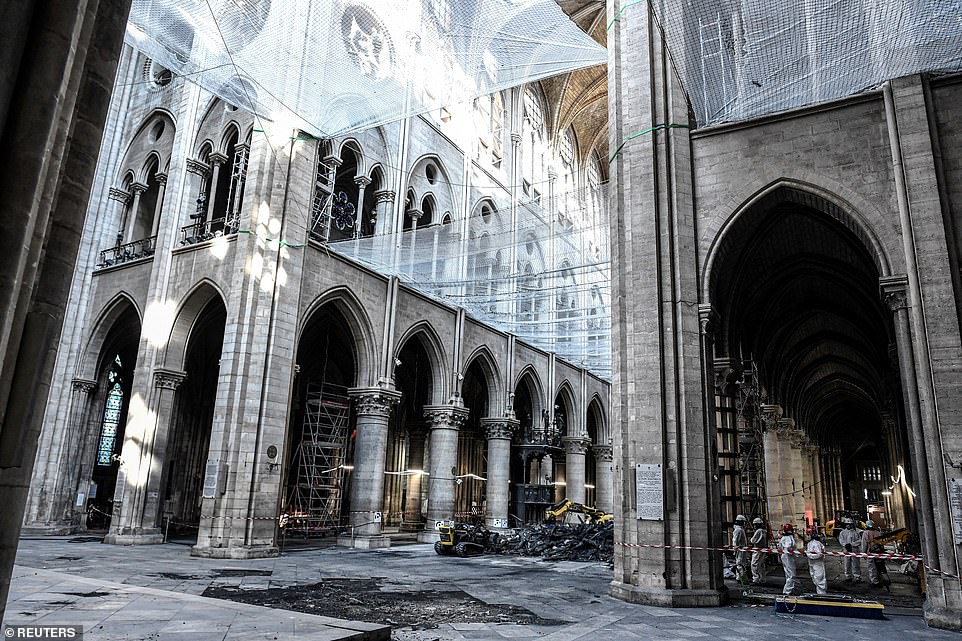 Despite the presence of specialist teams inside the cathedral (bottom right) restoration work has yet to start, with authorities still clearing up after the fire which caused extensive damage 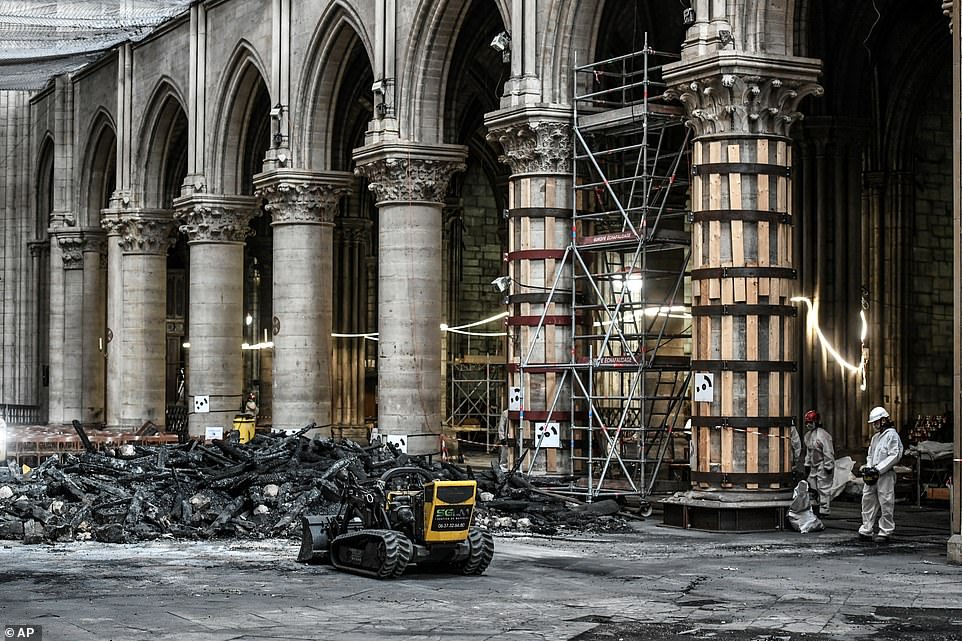 Since large parts of the cathedral roof was destroyed, there are fears that the rest of the building could still collapse, meaning work has to progress slowly (pictured right, wooden splints help to hold up columns inside the World Heritage Site) 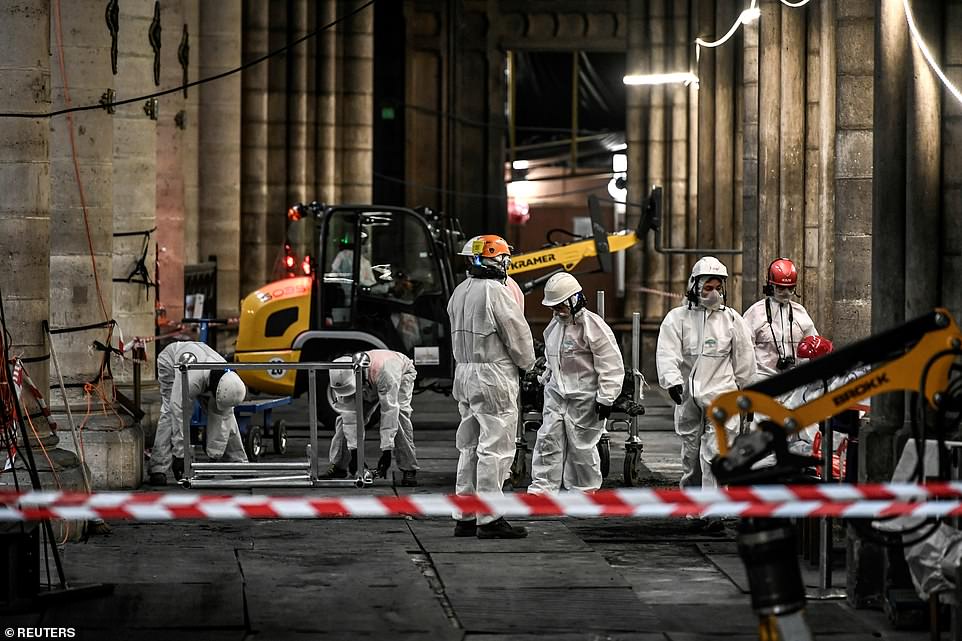 While workers have access to the nave of the cathedral, other areas are still so precarious that they can only be accessed by specialist robots for fear of causing a collapse 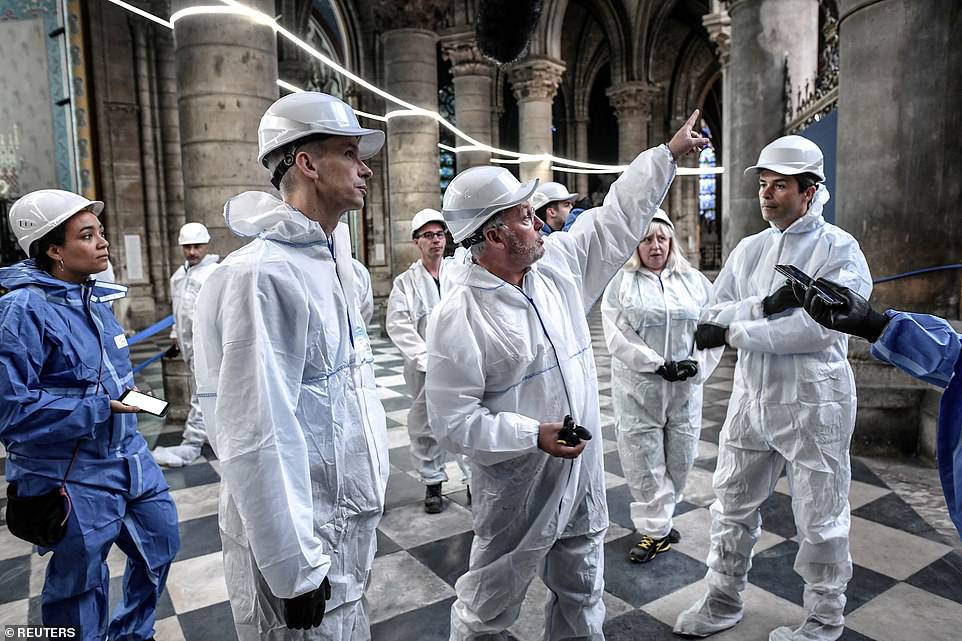 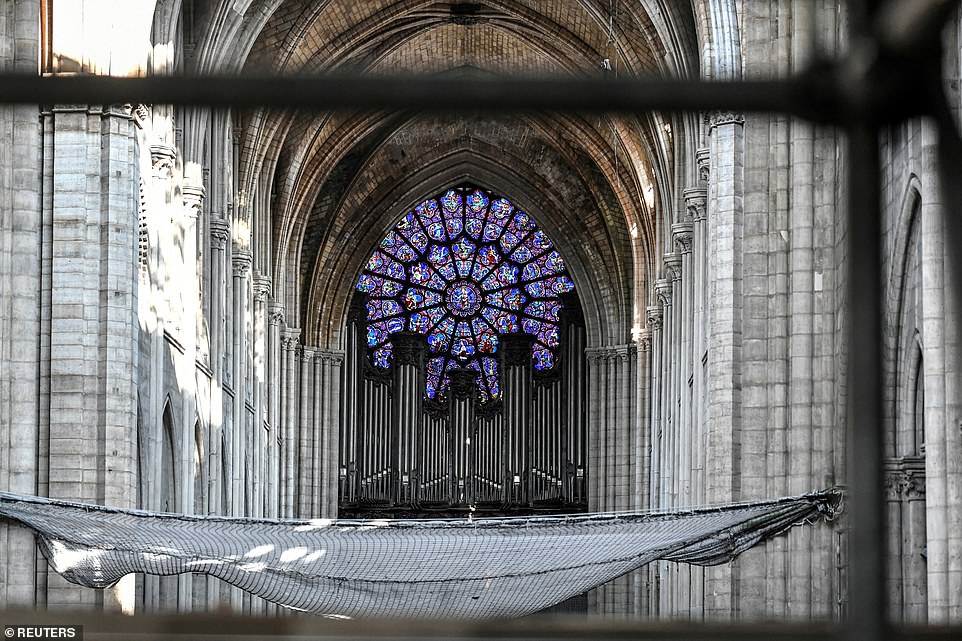 Despite almost completely destroying the roof of the cathedral, workers managed to preserve Notre Dame’s organ and its famous rose window (pictured centre)

Great protective nets have been hung to prevent objects falling from the roof and causing damage, and staff must guard against lead poisoning because of the contamination caused by the old melted roof.

An acrid smell still hangs in the air, while rows of untouched seats at the front of the cathedral are a reminder of what it looked like before the blaze, whose origins are still unknown.

The visit came a day after the French parliament finally passed a law on the reconstruction of the cathedral, which President Emmanuel Macron wants completed within the next five years.

The restoration work, which has not begun yet, will require replacing the roof, much of which was destroyed in the fire, and the spire, which collapsed to the ground.

But before any of this can begin, the cathedral needs to be secured so that no part – in particular the vault – is at risk of collapse. 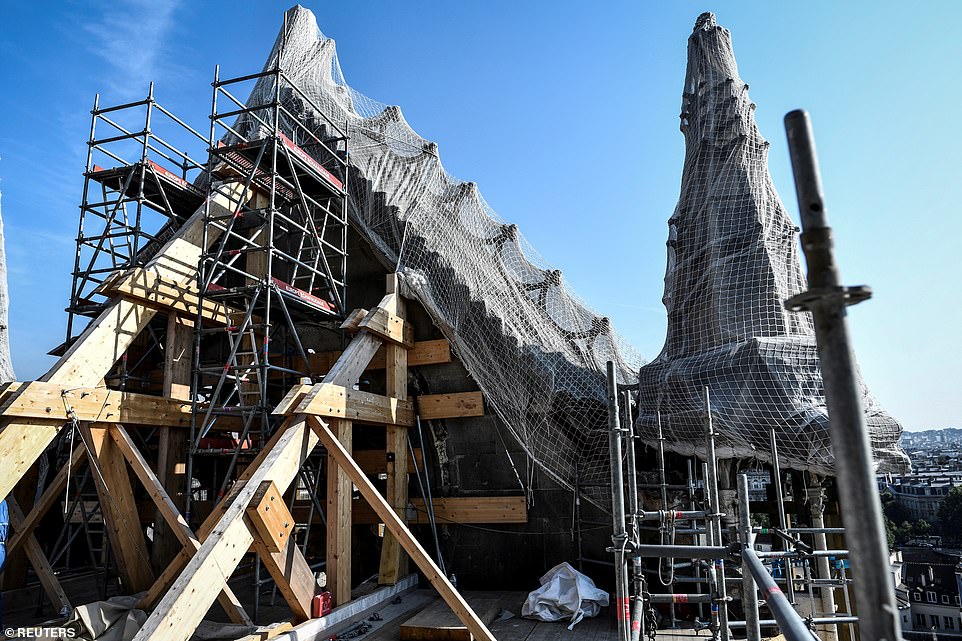 French President Emmanuel Macron has vowed that the cathedral will be completely rebuilt within five years, though critics say this target is overly ambitious and will need to be extended 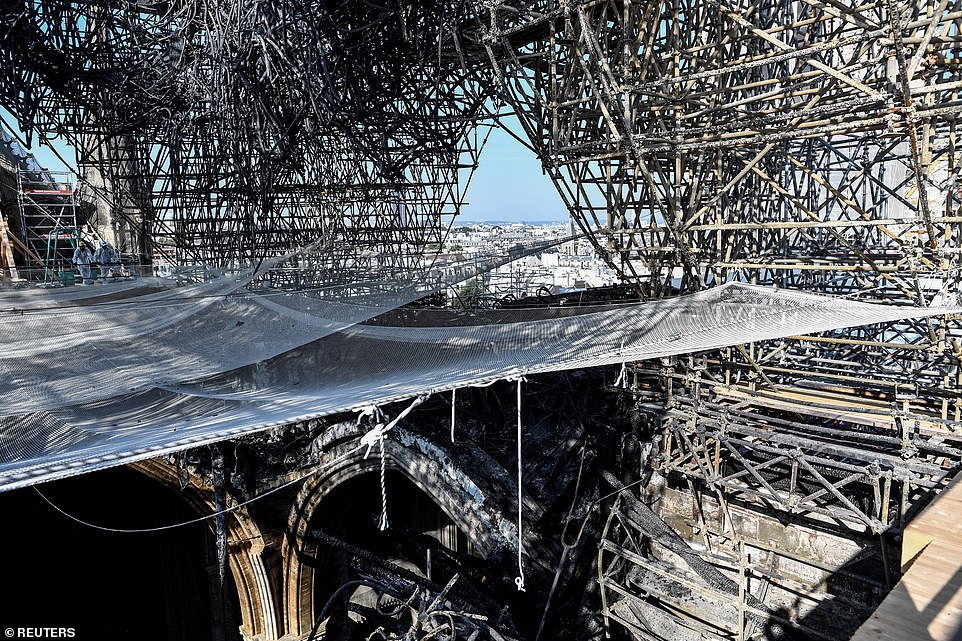 Workers inspect the roof of the Notre Dame cathedral with the Paris skyline in the background, while below the nave is visible after the vaulted stone ceiling collapsed 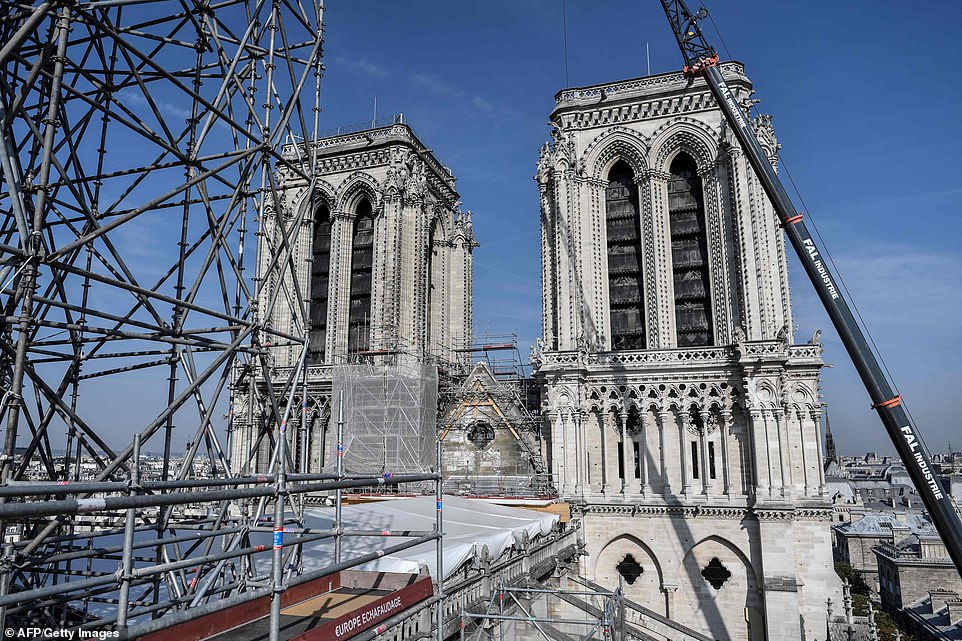 There were fears during the fire that it might spread to either or both of the cathedral’s instantly recognisable towers, though they were largely saved from damage by firefighters 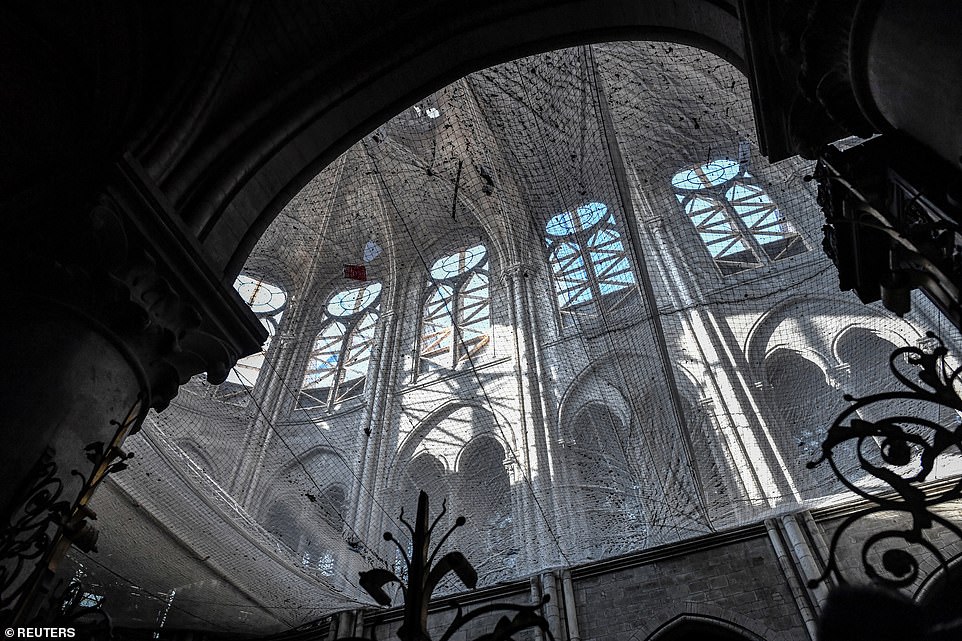 While the iconic rose window was saved from the blaze, dozens of other stained glass windows – whose colours will be difficult to replicate with modern techniques – were blown out by the heat (pictured) 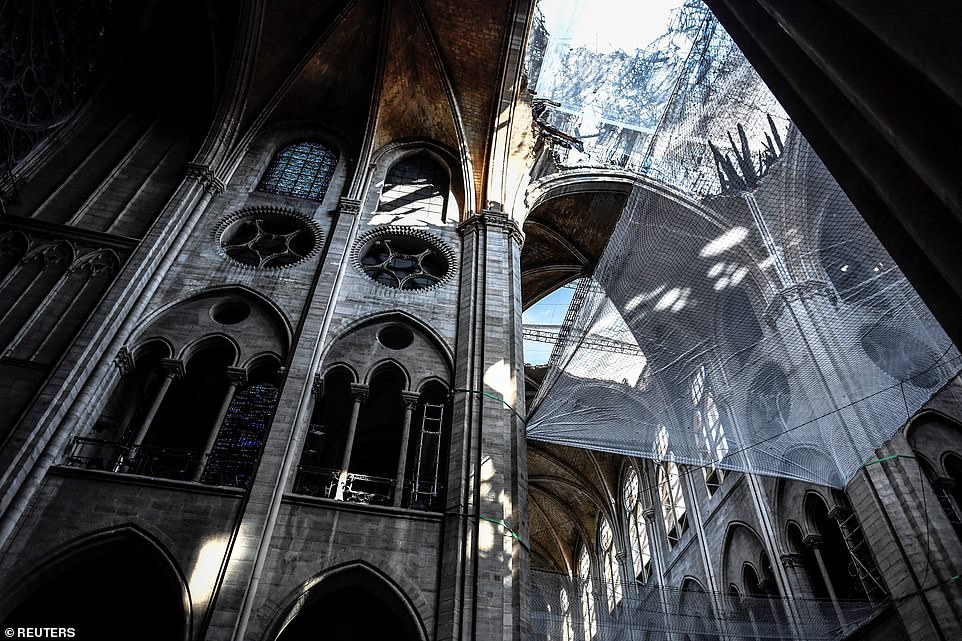 The heat of the fire caused part of the vaulted stone ceiling to drop into the nave below, showering burning debris down into the building and leaving it structurally unsound 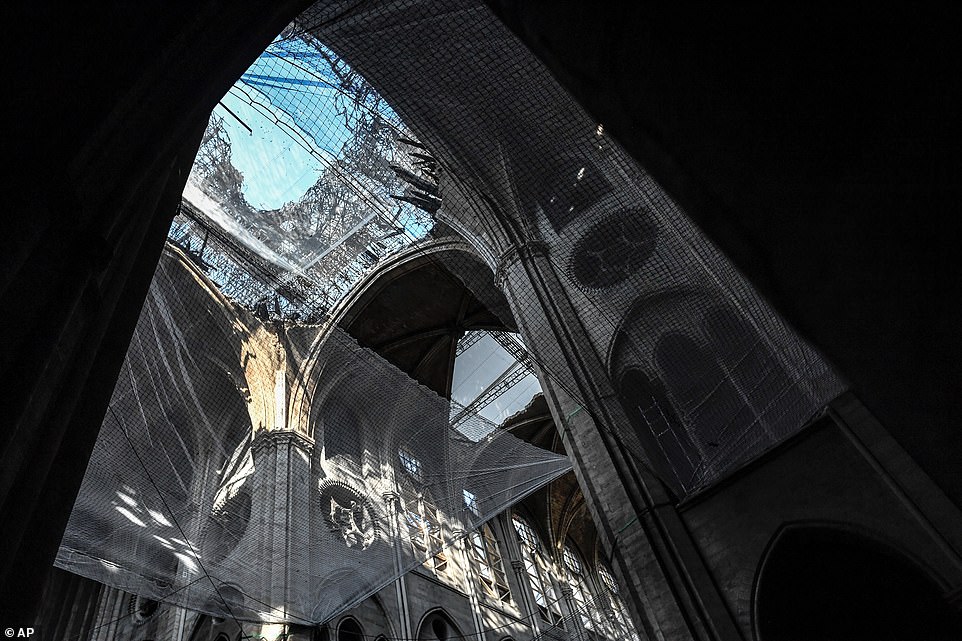 Damage on the nave is seen through a net hanging below the partially-destroyed roof of Notre Dame, which will now be restored over the next five years

‘We are not at all in the restoration (phase). We are still in the urgent securing’ of the cathedral, said Notre-Dame’s chief architect Philippe Villeneuve.

The risk of collapse is still so great that only remote-controlled machines are allowed to access some areas.

A large pile of rubble has been gathered in the middle of the nave and Villeneuve said every piece will be scrupulously examined.

‘Nothing is thrown away,’ he said, adding that analysis of each piece will help provide an ultra-precise scientific picture of the cathedral ahead of the restoration.

‘The site is not just a place for architects but for scientists and researchers,’ he said.

‘A catastrophe took place, but it will bring a lot of new knowledge.’

Despite the damage, the great cathedral’s grandeur remains, with its great pillars in the nave standing tall, its main organ intact and the great rosette stained glass window radiating colour in the summer sunshine. 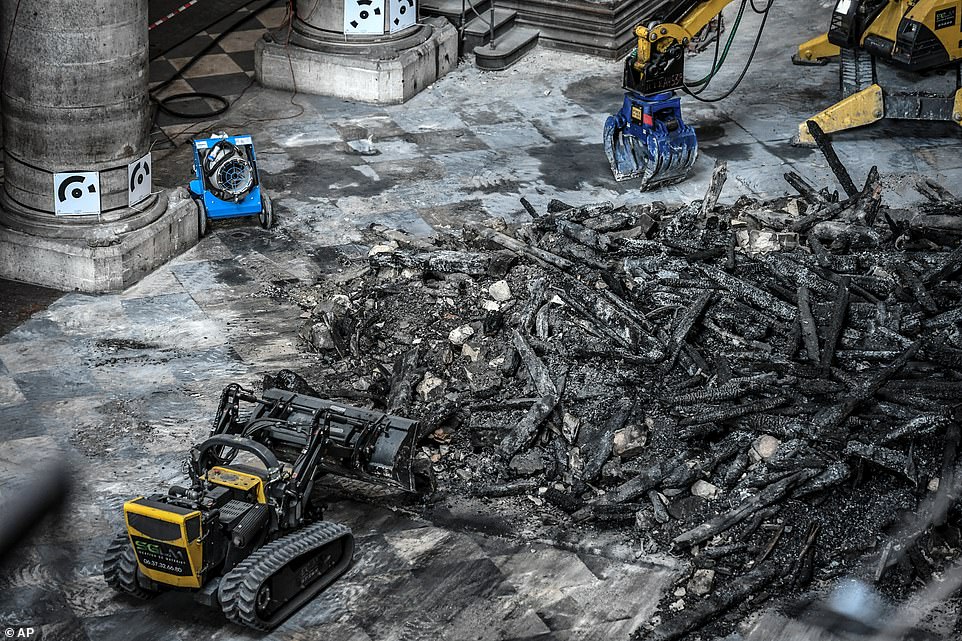 Scientists have been brought in to analyse every piece of the rubble to see what they are able to learn about the cathedral, its construction, and why it burned down 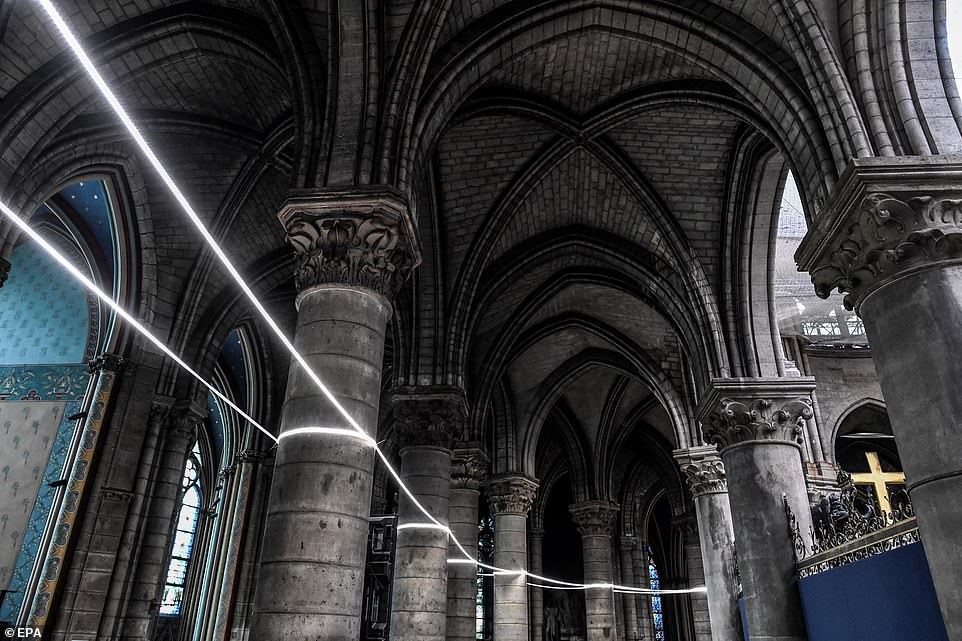 A light cable is spanned between columns at the cathedral. Photographers were allowed an extensive tour inside the same day a law was signed laying out an official timetable for the restoration 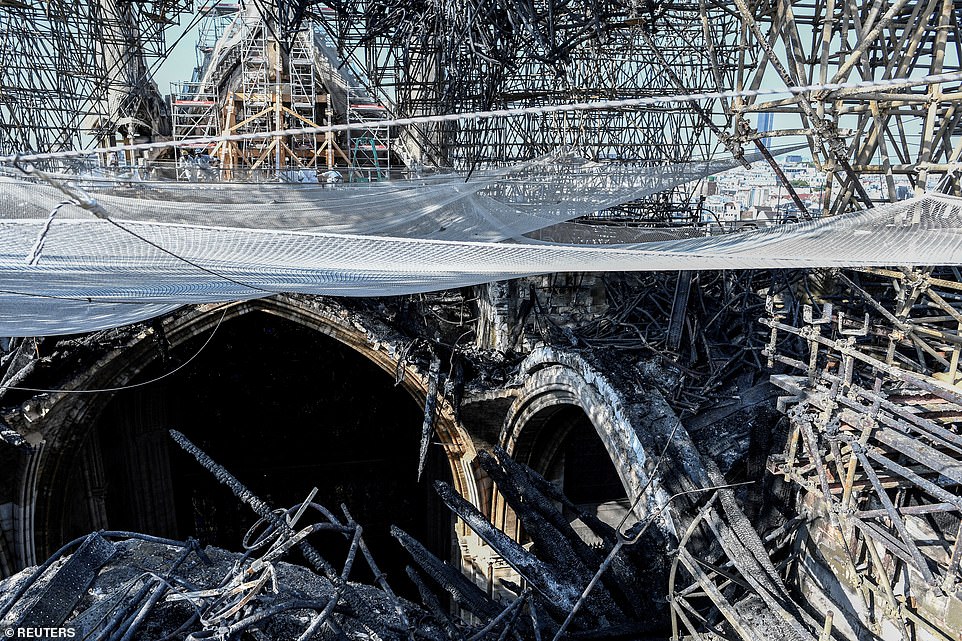 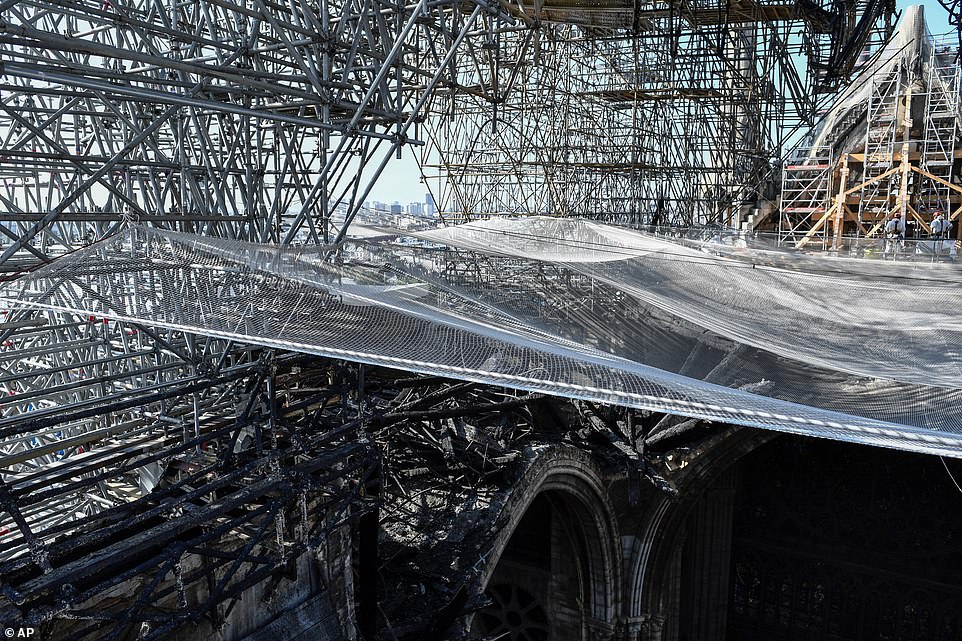 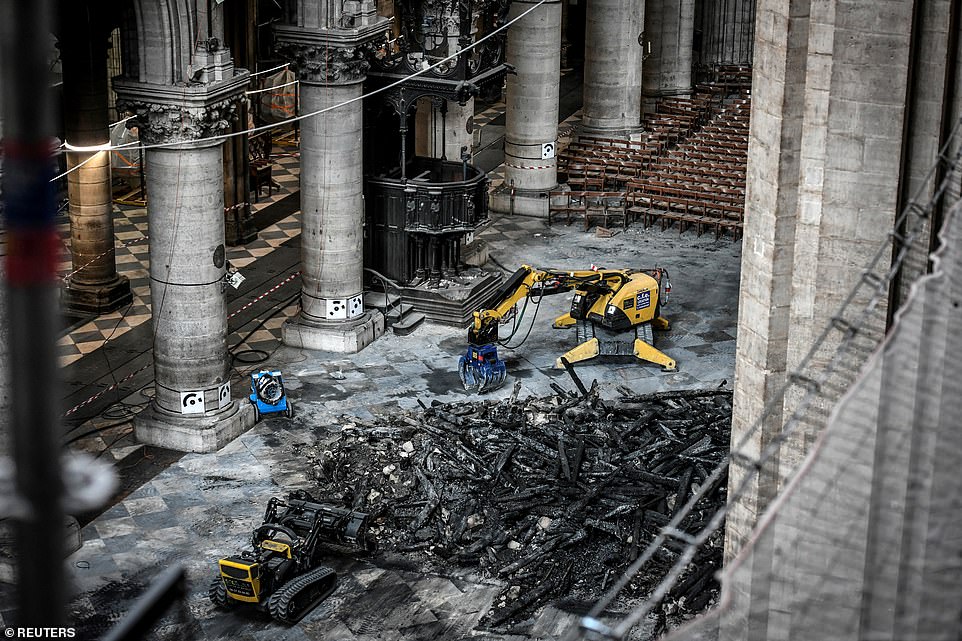 At this time of year the cathedral would traditionally be full of tourists and congregations attending services, but is currently filled with charred debris and excavators 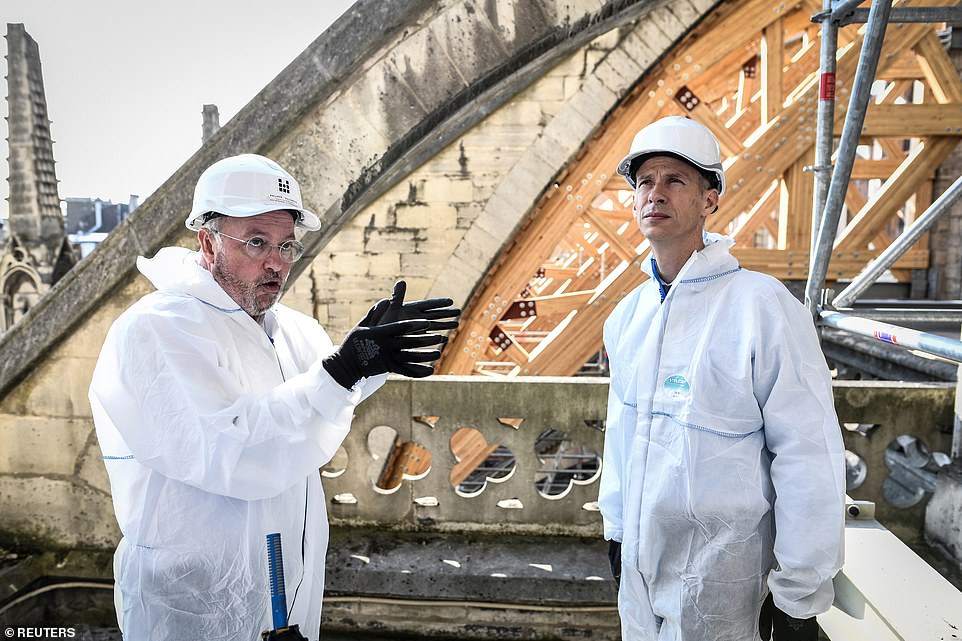 French Culture Minister Franck Riester speaks with French chief architect of historical sites Philippe Villeneuve on the roof of Notre Dame, while the cathedral’s famous flying buttresses are held up with wooden supports in the background 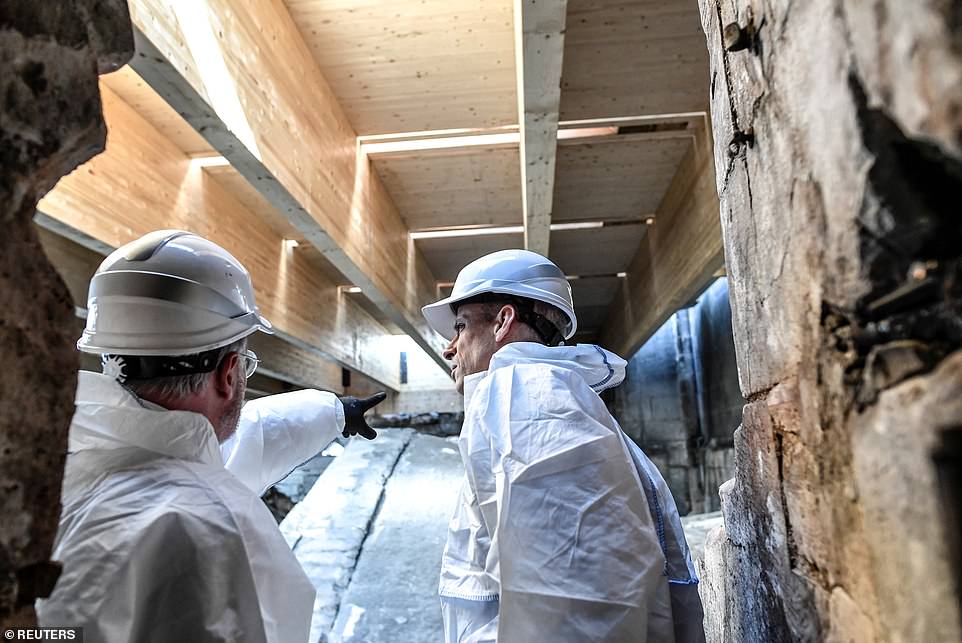 Mr Riester talks with architect Philippe Villeneuve as they discuss work that still need to be done on Notre Dame. After conducting inspections, Mr Villeneuve has said that Macron’s five-year target for restoration is ‘achievable’

Culture Minister Franck Riester, who like the journalists donned white overalls and a hard hat for the visit, hailed the progress but emphasised the long road ahead.

‘There was a mountain of rubble there just a few weeks before,’ he said.

Riester said the workers were wearing special masks because of the presence of lead which seeped into some of the stone during the fire.

‘We need to take all the necessary measures,’ the minister said.

He said the five-year deadline set by Macron was ‘not the question for today. The question is securing Notre-Dame’.

Paris prosecutors said in June that a poorly stubbed-out cigarette or an electrical fault could have started the fire and opened an investigation into criminal negligence, without targeting any individual.

On June 15, two months after the fire, clerics conducted the first mass inside the cathedral since the blaze, donning hard hats along with their robes for their safety.