London: Time has never been kind to the Titanic. It took just 160 minutes for the world's most famous ship to slip beneath the surface of the Atlantic on her maiden voyage, and less than 10 minutes to then glide to its final resting place on the ocean floor below.

The wreck would sit there, lost in total darkness, for more than seven decades before a team of American and French scientists found it in 1985. Their discovery revealed untold secrets of her sinking and ignited a new generation's fascination with one of the most calamitous and deadly maritime disasters in history. 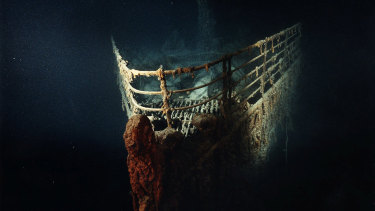 The Titanic’s bow at the bottom of the Atlantic Ocean.Credit:AP

But it also brought out the salvagers. Less generous observers described them as high-tech grave robbers. Already losing the battle against the ravages of deep sea currents and metal-eating bacteria, the Titanic's brittle remains have been subjected to repeated expeditions where thousands of artifacts and even an entire 15-tonne slice of the steel hull have been removed.

Robert Ballard, who first found the wreck, once blasted private submarine operators for inflicting damage on the deck during vessel landings in the years since. One American couple even got married in a submersible hovering over Titanic's bow.

Now, a new deal between the United Kingdom and United States promises to restore some dignity to the watery gravesite of the 1500 people who died when the ship went down mid-way through the crossing from Southampton to New York on April 14, 1912.

The agreement gives the governments of both countries the power to grant or deny licences to people who want to enter the hull or interfere with the vast debris field created when the ship split in two during the final violent moments of its sinking.

It is a strengthening of the basic level of protection the wreck – which is in international waters – has been afforded by its status as a UNESCO cultural site and improves on legislation the US Congress enacted in 1986 following the ship's discovery. 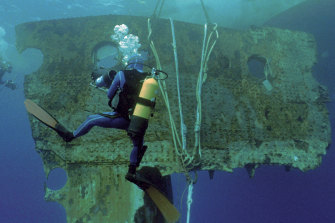 A section of the hull was raised in 1998, causing international outrage. Credit:AP

But the agreement's credentials will be instantly tested by a private US company's plans to cut open a section of deckhouse roof and retrieve precious artefacts, including the Marconi wireless system that sent the distress call for help following the ship's collision with the iceberg.

Backed by private equity firms, RMS Titanic Inc plans to lead the expedition and will argue the new agreement between the UK and US – as well as various other treaties and regulations – is not a legal barrier.

The fate of more than 5550 objects, including a bowler hat, steel door, bronze cherub statue, handbags and light fittings, became the subject of an international tug-of-war in 2018 when a consortium of hedge funds went up against a group of British museums (supported by Titanic director James Cameron and other prominent figures) for the right to buy the collection.

While there has been some unease at the removal of individual artifacts from the site, any active interference with the ship's structure would be hugely controversial with historians and victim families. The UK government would almost certainly object. 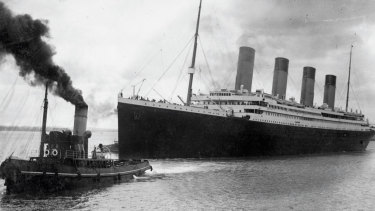 The Titanic leaving England ahead of her ill-fated maiden voyage in 1912. Credit:Southampton City Council

The latest agreement to better protect the site was reached in 2004 and swiftly ratified by Britain, but the US did not get around to introducing crucial enabling legislation until the end of last year. When they did formally sign up, the development barely registered a blip amid the UK's Brexit chaos.

In all, the agreement to protect the site took five times longer to get off the ground than it took to build the actual ship in Belfast. It is now in force though, and Boris Johnson's government plans on celebrating the achievement during an event in Northern Ireland on Tuesday just as the private US company goes public with its plans to "surgically remove" parts of the ship.

"Lying 2½ miles [4 kilometres] below the ocean surface, the RMS Titanic is the subject of the most documented maritime tragedy in history," said Britain's Maritime Minister Nusrat Ghani.

"This momentous agreement with the United States to preserve the wreck means it will be treated with the sensitivity and respect owed to the final resting place of more than 1500 lives." 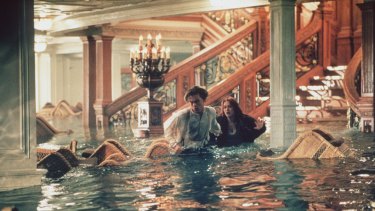 The ship’s discovery in 1985 and a blockbuster film starring Leonardo DiCaprio and Kate Winslet introduced the Titanic story to a new audience. Credit:Publicity

Royal Navy or other British vessels are unlikely to patrol the site, but the stretch of ocean about 740 kilometres off the coast of Newfoundland, Canada could be monitored remotely by satellite if required. The agreement grants UK authorities the power to board and search any ship in UK waters or any UK-flagged ship suspected of breaching Titanic's new protections.

Ghani said the UK would now take a "leading role" in urging other North Atlantic countries, including Canada and France, to sign up to the agreement and bolster the international effort to protect the historical site from harm.

Time is again working against Titanic though. During a recent manned submersible dive, documentary makers came back to the surface with distressing news: Titanic still stands but the hull is starting to disintegrate and the wreck is in far worse shape than when it was first photographed 34 years ago. One of the most striking discoveries in 1985 – Captain Edward Smith's bathtub standing amid what was once his private cabin – has now disappeared.

Henrietta Mann, a researcher who co-discovered a new species of bacteria lurking in the "rusticles" growing off the wreckage, estimates the ship may have just 30 years left before it vanishes for good.