Home » World News » NHS Nurse, 33, and her family are left stranded in the Philippines

NHS Nurse, 33, and her family are left stranded in the Philippines after a horrific car crash during their ‘perfect holiday’ left her paralysed from the waist down and unable to afford a flight home to Britain

Candice Montefalcon could not wait to get home to the Philippines to show her new-born baby to her parents.

It would be the first time in seven years she had visited her family, and it was a complete surprise.

But the trip they had planned for so long as the ‘perfect holiday’ was doomed to end in disaster. 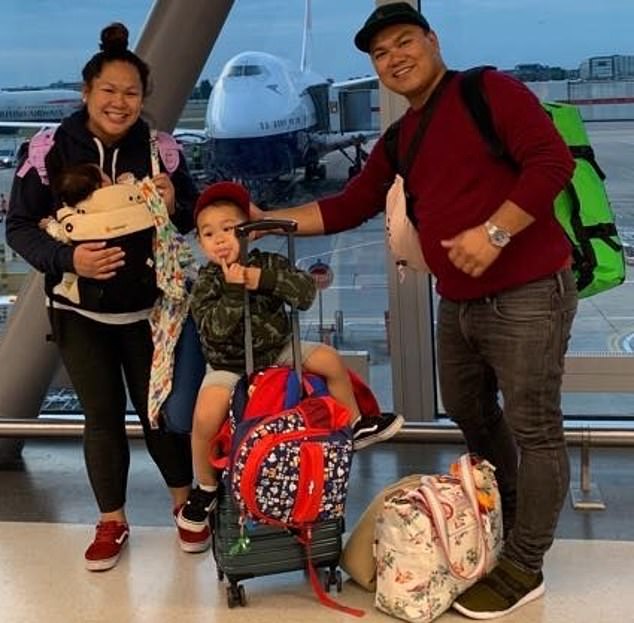 Candice Montefalcon (left) was going home to the Philippines so her family could meet her newborn baby. Pictured with her husband Silvino Bueza (right) and their two children Leon (left) and Luke (centre)

The couple, along with their two sons Leon and Luke, three months and four years respectively, were on their way to catch a domestic flight from Manila airport, when they were hit by a large coach, flipping the car over several times.

Senior nurse Candice, 33, suffered fractures to her spine and ribs, leaving her completely paralysed from the waist down. She is still currently unable to walk, sit or stand without severe pain.

Her two children were fortunately both unharmed in the incident and her husband, Silvino Bueza, is now recovering after having undergone ankle surgery.

But the couple had forgotten to take out holiday insurance and so were not covered for their flights home to the UK. 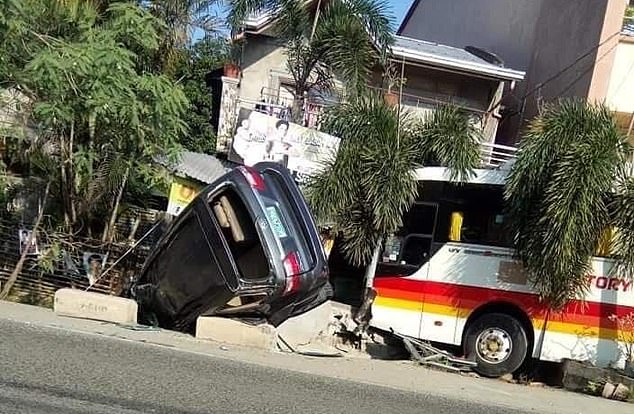 The couple, along with their two sons Leon and Luke, three months and four years respectively, were on their way to catch a domestic flight from Manila airport, when they were hit by a large coach, flipping the car over several times

They have now been stuck in the Philippines for more than a month and face the rising costs of hospital bills and other expenses.

Speaking to the Daily Mail, Mr Bueza said: ‘It was supposed to be a surprise for the whole family back in the Philippines and a much awaited holiday. 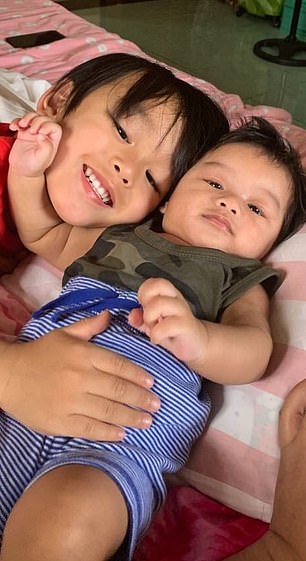 Candice’s two children Leon, three months, and Luke, four, were fortunately both unharmed in the incident

‘Candice was the one who had the most injuries. She sustained head injuries, which needed suturing, left shoulder fracture, multiple rib fractures but the most was her spinal fracture.

Candice underwent complex spinal surgery and needed titanium rods inserted into her spine to stabilise it.

She spent a week in an intensive care unit before being moved to a regular ward. And, although she has now left hospital, she is still partially paralysed.

‘With what happened to us, we are still very thankful as nothing bad happened to Luke and Leon,’ said Mr Bueza.

‘It seems like when the accident happened, they were bundled up with cushion as their protection.

‘Luke had scratches on his back which healed already and with Leon, not even a single scratch.

‘We have been discharged from the hospital but our bills are 20 thousand pounds and counting.

‘We are raising funds to pay for our hospital bills and Candice’s continuous therapy as she does not have any sensation or movement from umbilical area down.’ 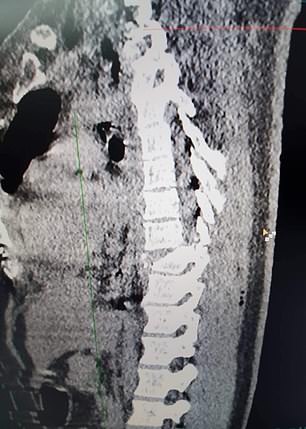 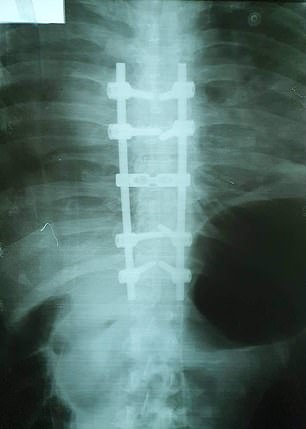 Back in the UK a crowdfunding page has been set up by Candice’s work colleagues at Northwick Park Hospital that is aiming to raise £30,000 to get the family home. So far it has raised just over £8,000.

Candice has been a senior nurse in the Emergency Department at Northwick Park Hospital for seven years.

Laura Norman, a colleague of Candice’s, said: ‘We are just desperate to get her home.

‘They didn’t have the money to pay for repatriation. 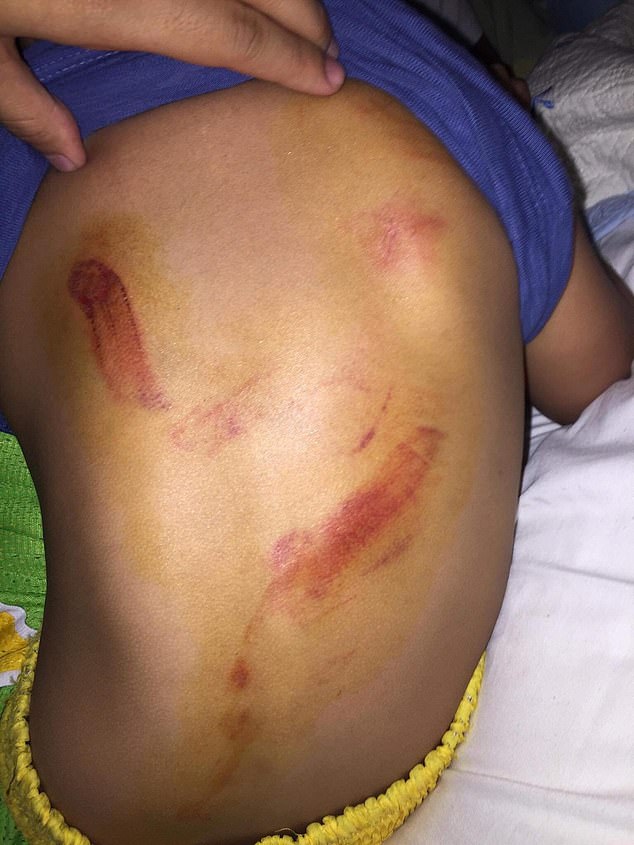 Luke, four, had minor scratches on his back after the accident – but they have already healed

‘Her relatives have all chipped in so that she can be taken home – she’s having physio but it is all ad hoc and not even an hour daily.

Ms Norman says that she and other members of Northwick Park are concerned that Candice’s treatment is not sufficient and frustrated that they cannot offer her the support that would have been available in the UK.

‘The reality of it is now setting in – it’s a complete nightmare,’ she said.

It says: ‘Candice is not giving up without a fight, and as helpless as we all feel right now, any small contribution to enable Candice and her family to be by her bedside fighting this with her is in somewhat a small way of helping.’ 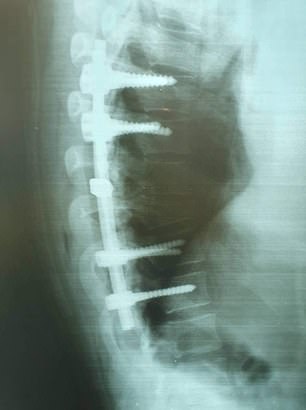 Mary Nunn, a matron at the hospital said: ‘We as her colleagues are frustrated that we cannot offer her the support and assistance that we would have been able to if she was here in the UK.

‘As we are limited to what we can offer Candice to improve her current situation, we have decided to raise money for all of the expenses.

‘Our ultimate hope is that we can bring Candice home to the UK for her to receive ongoing care, with the shared vision that she will walk again and resume a normal, healthy life.’

Multiple well-wishers have left heartfelt messages wishing her a speedy recovery, and donations have come from as far away as Chicago, US.

Arlene Acain wrote: ‘My prayers for you dear Candice… hugs to you and the little ones. God bless you and hope to see you soon!… I’m just here always’

Another anonymous benefactor said: ‘I pray for you to have a speedy recover [sic]..God Loves you and will surely heal you.’