NHS staff ‘keep stray CAT on ward’: Fury at ‘beyond belief’ behaviour of medics who adopted ‘pet’ (but it does catch the hospital’s rats)

NHS staff have come under fire after secretly keeping a stray cat in a hospital.

Food, scratch pads and a basket were brought for the stray cat Monty, who managers found sleeping in a linen cupboard during a routine check.

Infection control experts described the staff’s behaviour at Epsom Hospital in Surrey as ‘beyond belief’, and ordered a deep clean of the ward.

An internal investigation was launched after the Burmese cat was found asleep in a linen cupboard. A porter who had worked at the hospital for 28 years was sacked after he was caught on CCTV stroking the cat on a hospital bed.

A union rep’s letter to staff seen by The Sun said: ‘The Trust Board have gone nuts that a cat should be in the hospital. They are looking for the culprit.

‘If you are seen in an NHS hospital sitting stroking a cat when you should be at work, it’s a hard argument to win.’

Prof Hugh Pennington, an infection control expert said: ‘It is beyond belief hospital staff would dream of homing a cat.

‘Hospitals are supposed to be spotlessly clean to limit the spread of infection. The cat could be shedding hair, carrying fleas or leaving poo around.’

In one picture, Monty is seen in a stand-off with a rat on a desk in an office.

Monty’s real owner, who lives nearby, was traced when it was found the cat had a microchip.

Police had to investigate claims the cat was kept was kept hostage as it failed to return to its owner. 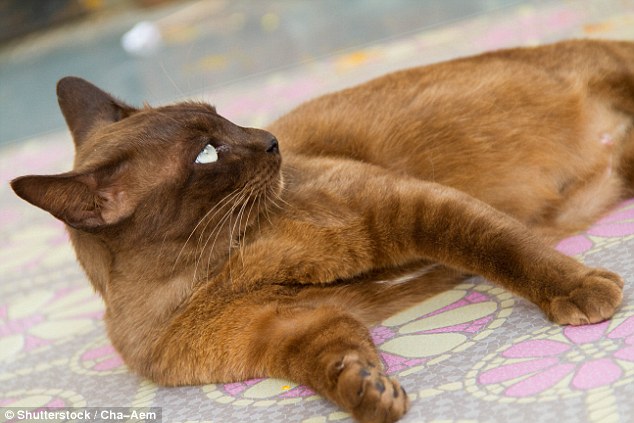 An internal investigation was launched after the Burmese cat was found asleep in a linen cupboard. Pictured: stock image of Burmese cat