Nicola Sturgeon demands Theresa May reveals her Brexit Plan B as PM makes visit to Edinburgh to unveil £1.2bn cash injection for Scotland

The Scottish First Minister says the UK faces falling of a ‘cliff edge’ in a ‘Blind Brexit’ and accused Theresa May’s government of a lack of clarity.

Nicola Sturgeon’s demand came as the Prime Minister claimed leaving the European Union will bring a brighter future for as she revealed billions in funding for Scotland.

Mrs May will pump a £1.2billion city deal into Edinburgh and the south-east, with Holyrood and Westminster committing £300million each. 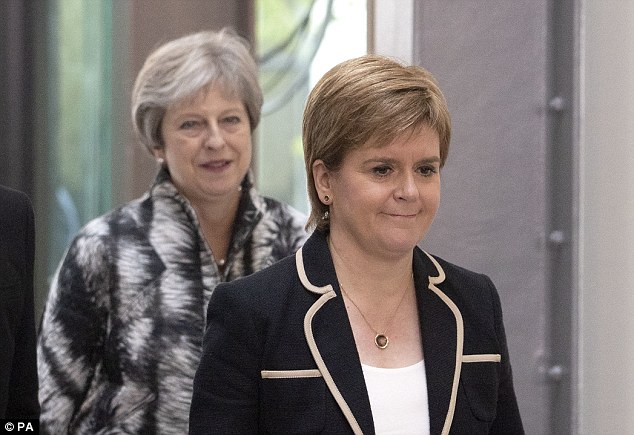 Scottish Conservative leader Ruth Davidson welcomed confirmation that two of six new UK science centres will be north of the border, with Dundee and Glasgow benefiting from some of the Government’s £13million investment.

But the Scottish National Party leader called on the Prime Minister to reveal her ‘Plan B’ on Brexit, warning against a ‘blind Brexit’ and a ‘no deal’ on her party’s website.

‘She must secure a withdrawal agreement that provides for an orderly transition,’ she said. ‘Without that, the UK faces the catastrophic prospect of crashing out of the EU without a deal. 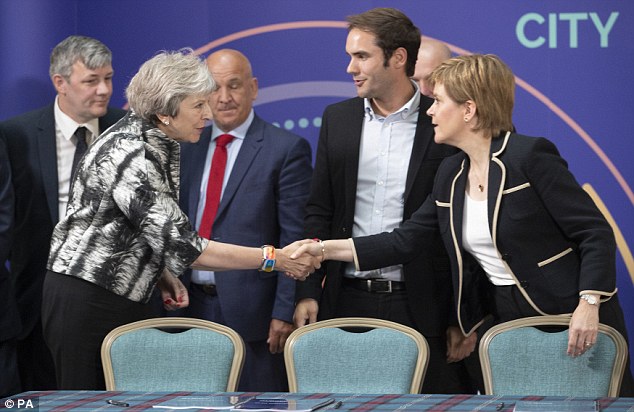 ‘But she must also secure agreement on a detailed statement on the future relationship between the UK and the EU – because without that we will simply be moving from the prospect of a no deal Brexit to the damage of what some of her own colleagues apparently now refer to as a blind Brexit.

‘A no deal Brexit would be utterly unacceptable and deeply damaging, but by talking it up as a negotiating tactic there is a very real danger it becomes a reality.’

She called on the Prime Minister to keep her pledge on a detailed statement about  the future relationship with the EU alongside the withdrawal agreement, so parliament and voters know where the UK is headed.

The Scottish First Minister formally signed off on the Edinburgh and south-east Scotland city deal today.

It aims to  support cutting-edge research at the capital’s three universities, improve housing and transport links and help to build a new concert hall.

Mrs May is visiting Edinburgh as the capital’s annual festival season gets under way, with Edinburgh International Festival director Fergus Linehan reportedly preparing for the impact a ‘catastrophic’ Brexit could have on events. 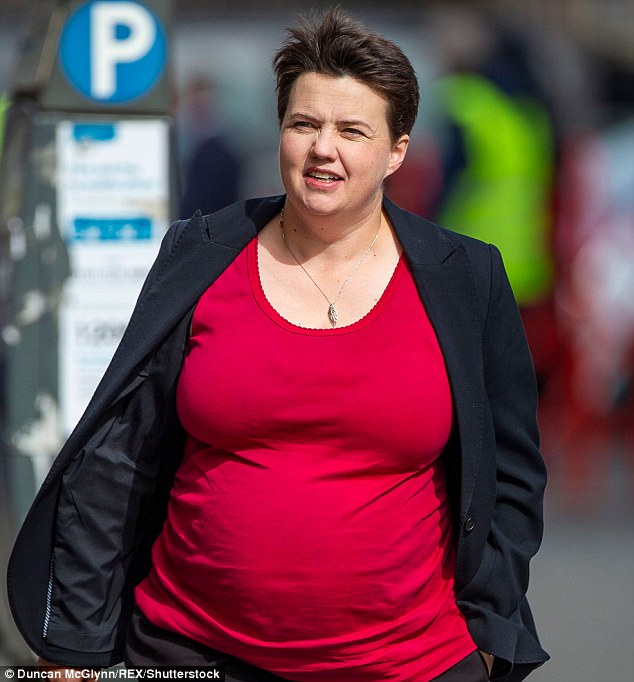 A heavily pregnant Ruth Davidson welcomed news of the funding boost for Scotland, but the SNP leader questioned the Conservatives’ Brexit plan

She spoke about the work ministers are doing to ‘create more good jobs and spread economic prosperity across the country’ as Britain prepares to leave European Union.

Speaking ahead of the visit, the Prime Minister said: ‘I am pleased to be in Edinburgh today for the city’s annual celebration of the arts and culture.

‘From the Fringe, to the International Festival, festivals dedicated to science, books and storytelling, the city is truly a cultural inspiration for the rest of the UK and the world.

‘Alongside the Scottish Government and local partners, I will be confirming £300 million, as part of a wider £1 billion investment by the UK Government through city deals in Scotland, to create jobs and open up new economic opportunities throughout the nation.

‘These city deals build on existing strengths to open up new possibilities for the future in Scotland and the whole of the UK as part of our modern industrial strategy.’

She added: ‘Today I have also announced a further £13 million for investment in six science centres in the UK, including Dundee and Glasgow, to drive innovation in science and technology.

‘As we leave the EU, the UK Government is working in partnership with business, academia and the devolved administrations to create more good jobs and spread economic prosperity across the country.

‘By making the most of our country’s assets and the talents of all of our people, we can build a brighter future for the whole UK.’

City of Edinburgh Council leader Adam McVey said: ‘The agreement of this ambitious deal heralds the beginning of a transformative and inclusive programme which will help share our success right across the region.

‘This investment will allow us to unlock the region’s potential to become a global powerhouse in data-driven innovation through our exceptional research and development activities, whilst the commitment to a skills programme will enhance job prospects for everyone and allow us to capitalise on the opportunities technology and innovation creates.

‘We will also greatly enhance the region’s infrastructure through significant funding for transport projects and housing development to build a vibrant region for people and businesses to thrive in.’

The funds will support economic growth across the region through housing, innovation, transport, skills and culture.

Investment from the Scottish Government will contribute towards 41,000 new homes, 21,000 jobs and improve the skills of an estimated 14,700 people.

Ms Sturgeon said: ‘Edinburgh and the south-east of Scotland is an area of huge importance to the Scottish economy.

‘The region contains over a quarter of Scotland’s population and contributes £33 billion to the Scottish and UK economies.

‘The Scottish Government’s £300 million investment in the City Region Deal will contribute towards 41,000 new homes, 21,000 jobs and improve the skills of an estimated 14,700 people across the region.

‘Our investments will ensure businesses and communities from across the region benefit from the opportunities created by this the city region deal.

‘Taken together, these projects will help the region continue to thrive and grow, fulfilling our ambitions for the region to be one of the fairest and most inclusive areas.’