Howell, N.J., Police Chief Andrew Kudrick, Jr. says he will not enforce some of the governor’s COVID-19 executive orders.

New Jersey Gov. Phil Murphy was accosted by a group of people while he was eating dinner at a restaurant with his wife and four children, a video shared on social media shows.p

The Democratic governor was seen on video sitting with his wife, Tammy; their three sons and their daughter, when at least two women approached and confronted him, according to a video of the encounter. Murphy and his family, who were not wearing masks at the time, were not only seated but eating at the time of the confrontation.

“Oh my God, Murphy, you are such a d—,” one woman reportedly tells him. According to local news site the Monmouth Daily Voice, they were dining at a restaurant in Asbury Park. It appears they were sitting outside at the time. 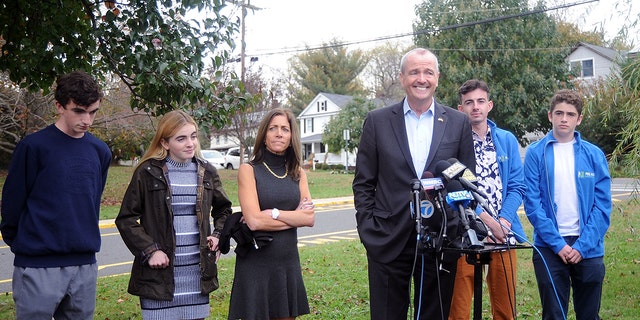 Tammy Murphy then whispers something in her husband’s ear as another woman cuts in.

“You havin’ fun with your family in the meantime you’re havin’ all kind of other bulls— goin’ on?” the woman says.

When one of the governor’s sons asks the woman if she’s drunk, she denies it. When he asks her if she can wear a mask, she responds: “You can go f— yourself, how’s that?”

“You know why I don’t need a mask?" the woman continues. “Because there ain’t nothin’ f—– wrong with me.” 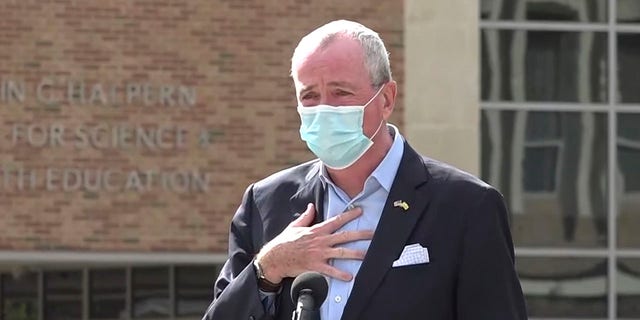 As the conversation continues, Murphy places his mask over his face and his wife appears to begin recording the group.

The governor has not publicly commented on the incident. Requests for comment from his office were not immediately returned Monday.

Murphy has faced backlash recently over his stringent novel coronavirus-related restrictions and limitations as the holidays approach.

Just last week, Town of Howell Police Chief Andrew Kudrick said his department “will not accept nor respond to any report of a facial covering/mask, social distancing or indoor/outdoor gathering complaint.”

“By no means is this a defiance to the Governor’s orders as I do believe we all have to do our part to end this pandemic,” Kudrick wrote. “However, we the police will not be used to carry out orders I feel are detrimental to our relationship with our community. Or, will put officers in a no-win predicament such as being called for a social distancing or mask complaint. Although justified in our enforcement, the perception will be the opposite and majority support will be lacking.”

Kudrick said the police department would only “consider a response” when receiving reports of “packed” house parties.

“Our community is hurting,” he said. “I live here. I grew up here. I shop here. I go out to dinner here. And I talk one-on-one with our business owners … and I see how much they’re hurting.”

“So as a police chief, in charge of 100-plus police officers, I felt it was just incumbent upon me just to let them know, and let my community know, that we’re not going to enforce some of these executive orders which I feel are basically draconian,” he added.

Earlier this month, California Gov. Gavin Newsom came under fire after he was seen without a mask sitting closely with others in a group at a Los Angeles restaurant, where he was attending a birthday party for one of his advisers. He later admitted he needs “to preach and practice, not just preach.”

Meanwhile, Washington, D.C., Mayor Muriel Bowser was in hot water for flouting her own state quarantine list after traveling from Delaware. Chicago Mayor Lori Lightfoot was also criticized after she shared a video celebrating election results in a crowd of people without wearing a mask.