As a young boy growing up in Norway, Waerner spent idle hours thinking long and hard about two different kinds of iconic American modes of transportation: muscle cars and the sled dogs in the Iditarod.

Waerner, 47, made one of those dreams reality on Wednesday, winning the nearly 1,000-mile (1,609-kilometer) Iditarod Trail Sled Dog Race across Alaska. 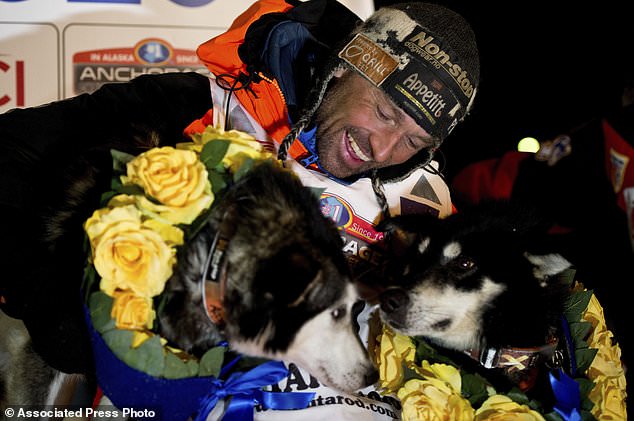 Thomas Waerner (pictured), of Norway, won the Iditarod Trail Sled Dog Race after crossing the finish line in Nome, Alaska, at 12.30am on Wednesday 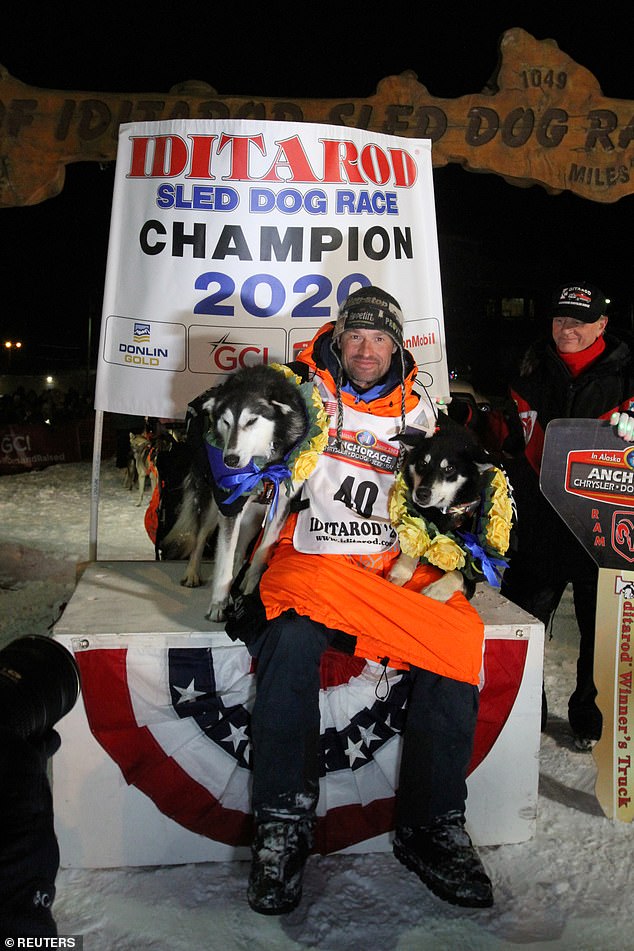 Werner is seen here posing with his two lead dogs, K2 (left) and Bark (right) after their win 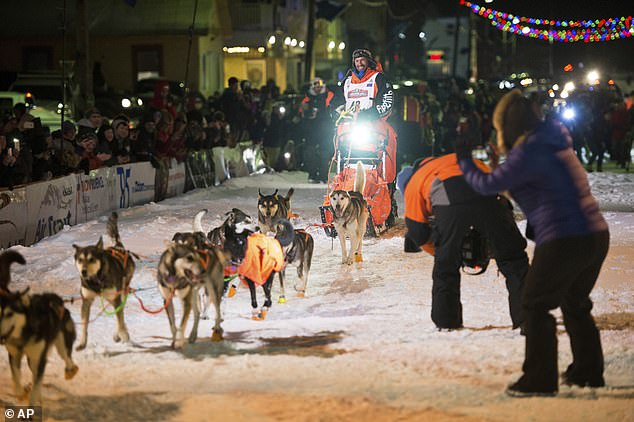 Waerner is shown arriving in Nome, after leading his team of 10 dogs off the Bering Sea ice 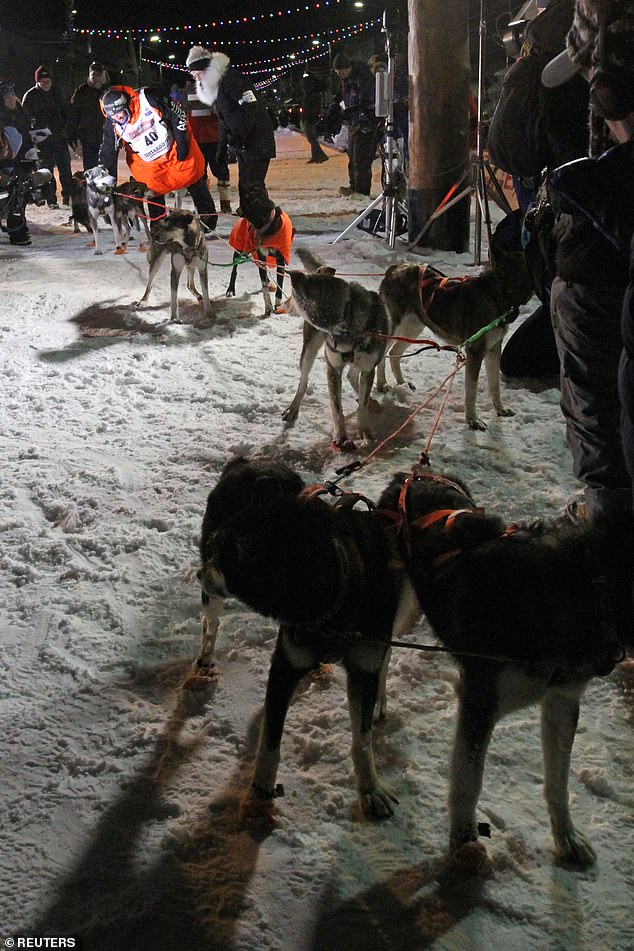 After winning the race, Waerner (in orange) stopped to pet his dogs and give them treats

He took a commanding lead in the late stages of the race and held a five-hour advantage over the next closest musher, three-time champion Mitch Seavey.

‘This is awesome,’ Waerner said after winning the race. ‘This is something special.’

Waerner took his dog team over mountain ranges, on the frozen Yukon River and across treacherous Bering Sea ice to the finish line on Nome’s main street in nine days, 10 hours, 37 minutes and 47 seconds.

The race started March 8 north of Anchorage and was one of the few sporting events in the U.S. that wasn’t canceled because of the new coronavirus.

The Iditarod encouraged fans not to travel to Nome, Alaska, for the finish as the city closed public buildings to help prevent the spread of the coronavirus. 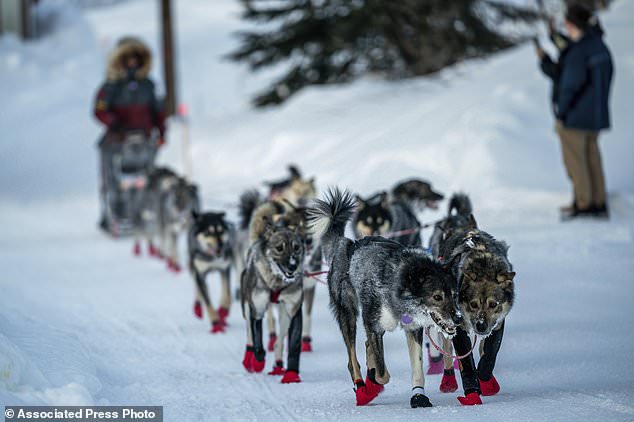 Musher Richie Diehl is shown here arriving in Ruby, Alaska, on the morning of March 13 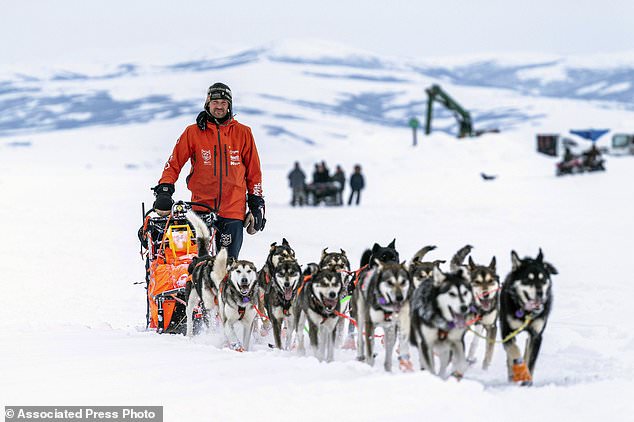 Thomas Waerner mushes into Unalakleet, Alaska, on March 15, during the Iditarod race 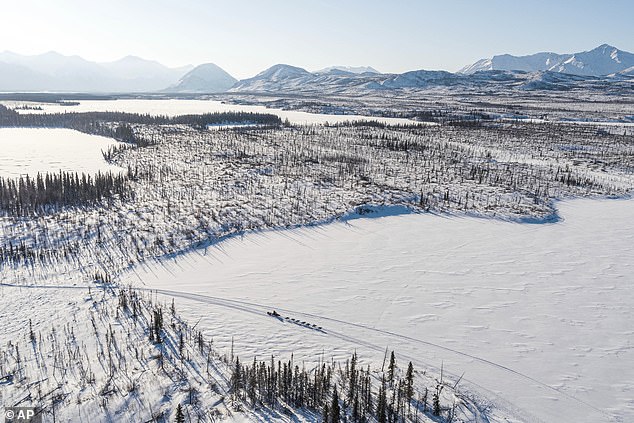 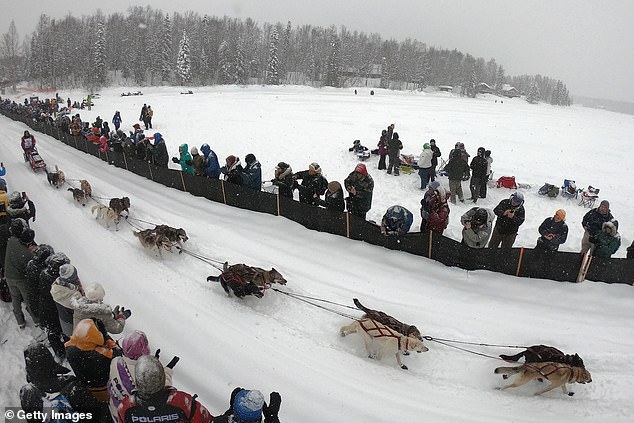 But fans didn’t employ social distancing as they poured out of bars and hotels to cheer Waerner as he drove the team off the Bering Sea ice and down Nome’s Front Street to the finish line just after 12.30am.

He will earn a minimum of $50,000 and a new pickup truck for winning the race. The actual cash amount will depend on how many mushers finish the race, a factor in how the prize money is divvied out.

Waerner immediately thanked the 10 dogs in harness, petting and rubbing each dog, ending with his lead dogs K2 and Bark, before handing out treats.

He called K2 ‘an amazing dog.’

‘He has this inside engine that never stops,’ Waerner said.

Bark is the tough one, the winning musher said.

‘He’s the one just charging through everything. It doesn’t matter what comes, he will just go through it, storms or whatever,’ Waerner said. ‘So they two together are an amazing team.’

Waerner, who began mushing in 1984, won the Iditarod in only his second attempt.

He finished 17th in 2015, when he earned Rookie of the Year honors. Wearner last year won the 745-mile (1,200-kilometer) Finnmarkslopet, the longest sled dog race in Europe.

As an 11-year-old boy in Norway, he read mushing magazines touting the achievements of some of the Iditarod’s most famous mushers of that era. Their ranks included the race’s only five-time winner, Rick Swenson, and a four-time winner, the late Susan Butcher, who in the 1985 race had to fight off an angry moose with an axe after it killed two of her dogs.

Waerner told reporters at the finish line that it was always his ‘dream to come here and do the race.’

Waerner became the second Norwegian musher in the last three years and third this century to win the race. Joar Leifseth Ulsom won in 2018 and Robert Sorlie took titles in 2003 and 2005.

All three Norwegians earned Rookie of the Year honors before winning.

Waerner encouraged other Norwegian mushers to follow in their footsteps.

‘This is a great race you can do,’ he said. ‘Just start training.’

Warner’s victory was also a moment of pride for the Anchorage Sons of Norway chapter. Members considered throwing a banquet in his honor at a lodge, but restrictions put into place by the city over fears of the coronavirus derailed those plans. 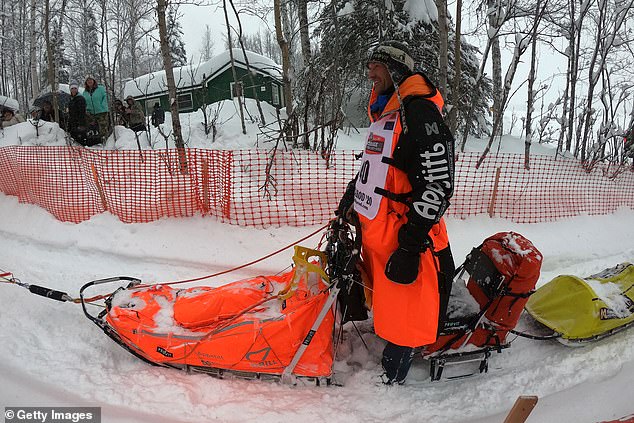 Waerner is shown here at the start of the Iditarod race, which begin on March 8 in Willow 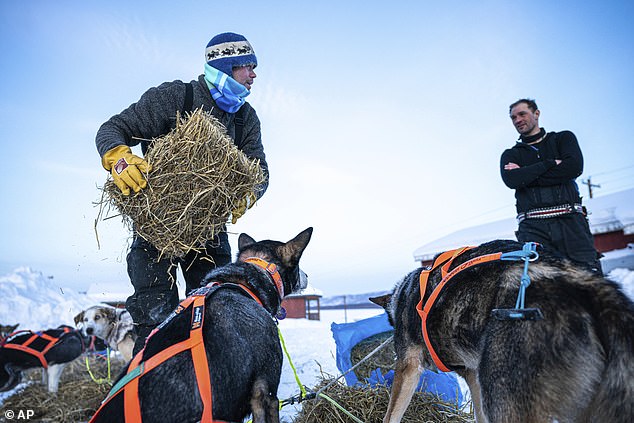 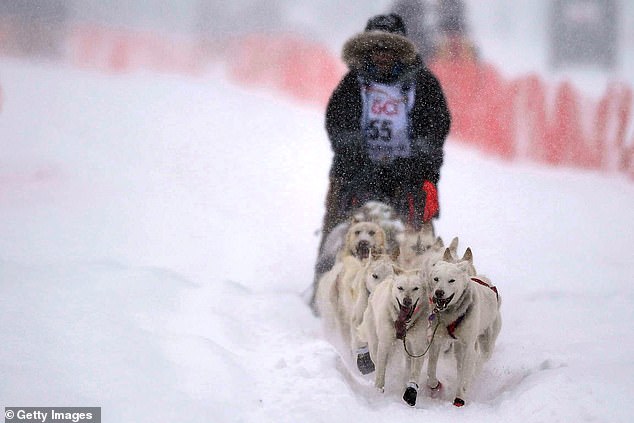 ‘We are super excited,’ said Lise Falskow, the Norwegian honorary consul in Alaska

‘Whenever a Norwegian is involved in the Iditarod, it’s something that we all rally behind and get very excited because the Norwegians, they’re tough and they’re determined and like Alaskans, they don’t shy away from the Iditarod,’ she said.

Waerner lives in Torpa, Norway, with his wife, Guro. She is a veterinarian who helps out with their kennel. He also owns an electrical business.

Nome wasn’t the only Iditarod race location where fears over the coronavirus prompted changes. Some local officials in communities along the race’s route asked that the checkpoints be moved outside of the villages to prevent any spread of the virus.

The Iditarod suffered a big monetary blow this year when two longtime sponsors with deep Alaska ties dropped their financial support for the race.

People for the Ethical Treatment of Animals took credit for Alaska Airlines and the Anchorage Chrysler dealership dropping their support after targeting the airline’s headquarters in Seattle, Washington, and the Fiat Chrysler Automobile offices in Detroit, Michigan, with protests over what the group has called the race’s cruel treatment of dogs.

Alaska Airlines said PETA had nothing to do with its decision, which it called a change in the company’s corporate giving strategy.

Fiat Chrysler Automobiles didn’t mention PETA when it confirmed that the independently owned and operated dealership would no longer sponsor the race.

The Anchorage dealership was one of the Iditarod´s top-tier sponsors and provided the pickup for the race winner for 30 years.