A mysterious boom jolted the US state of New Hampshire and at least one adjoining state on Sunday morning, rattling homes, spooking pets and prompting several hundred amateur sleuths to go online to try to find out what possibly could have caused all the commotion.

The source of the boom has confounded residents, many of whom speculated that it might have been an earthquake. 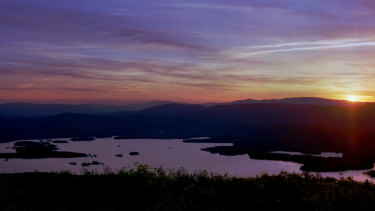 New Hampshire, where a mysterious boom was heard. Credit:AP

But an official at the National Earthquake Information Centre, which is part of the US Geological Survey, said that none of the agency’s stations had found any evidence of an earthquake in all of New England during the past seven days.

Some residents wondered if a meteorite or an aircraft might be behind the mystery, one that generated some complaints next door in Massachusetts.

Dan Brian said that he was at home in New Boston, New Hampshire, which is about 35 km northwest of Nashua, New Hampshire, sipping kombucha and playing a video game with his wife when he heard what he thought was a large explosion.

“There was a kind of a loud boom that rattled our whole house,” Brian said Sunday. “It had like an audible boom to it. It was very strange. That’s why everyone thought it was like an explosion at first.” 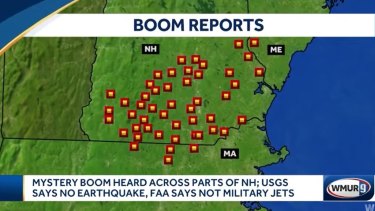 Reports of the boom on a map shown by local media.Credit:WMUR

Brian, 38, a technical writer, said he feared that something was wrong with his roof and ran out to his driveway. There was no damage to the home but the couple’s dogs were “just as confused,” he said.

He said he immediately went online to search for answers.

“No one’s owned up to anything,” he said.

In home camera footage that Brian shared, a series of muffled thuds can be heard.

The footage shows him saying: “That was not good,” before stepping outside to inspect what happened.

The fire chief in New Boston, Dan MacDonald, said he was at home when he heard what sounded “like a loud explosion” and felt a “slight vibration” in the house.

The fire department immediately began receiving calls from residents asking about the boom. MacDonald said he still isn’t sure.

“Fortunately, I’d gone to church this morning,” he said. “So I felt prepared.”

Dylan Mei, a dispatcher for the police department in Winchendon, Massachusetts, said three residents of the town called to report that the “ground was shaking.” WCVB-TV reported that numerous residents emailed the station to share stories of hearing a loud boom and feeling the ground shake.

Don Blakeman, a geophysicist for the US Geological Survey, said Sunday that the NEIC had not detected any seismic activity in the area Sunday. But that doesn’t entirely rule out that there might have been a minor earthquake, he said.

New Hampshire often gets small earthquakes, said Jessica Turner, a geophysicist for the US Geological Survey. The last time was August 22, when an earthquake of 1.7 magnitude was recorded in an area south of Rochester, Turner said.

Paul D. Raymond Jr., a strategic communications administrator for the New Hampshire Department of Safety, said in an email on Sunday that the agency had seen people commenting about the noise online.

He said the statewide emergency services centre received only one call reporting a large boom around 11.30am in Lyndeborough, New Hampshire, and no calls to the State Police dispatch centre. Raymond pointed out that more than 400 people had shared their observations on volcanodiscovery.com, a website where people can report seismic-like activity.

Brian, who discussed his experience on Twitter, pointed out that his home is near the New Boston Space Force Station, a satellite tracking station that was recently transferred from the Air Force to the Space Force.

Officials at the US Space Force did not immediately respond to a request for comment Sunday.