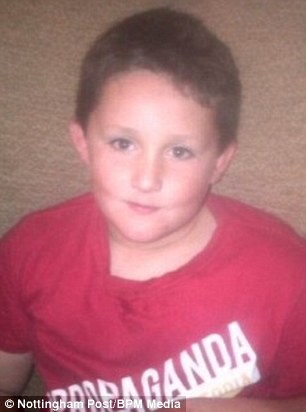 Loki Orange, 12, has been missing for almost a week. Police are concerned for his safety

Nottinghamshire Police are appealing for information on the whereabouts of a missing 12-year-old boy.

Police say they are growing increasingly concerned for Loki Orange, who has been missing for almost a week.

Police are searching for the boy after he was reported missing from the Hucknall area – around eight miles north of Nottingham.

A spokesman for Nottinghamshire Police said they are concerned for his safety and added: ‘Loki, who was last seen on August 1, is described as white, of small build and is around 4ft 2ins tall.

‘He is described as having short dark brown hair.

‘If you have seen Loki or have any information about his whereabouts, please contact Nottinghamshire Police on 101, quoting incident number 813 of August 3 2018.’

Nottinghamshire Police works with the Missing People charity to support runaways, missing people and their families.