Now it’s Captain Tom: The Movie! NHS fundraising hero’s life will be put on the silver screen as 100-year-old says Michael Caine should get title role

Captain Sir Tom Moore is getting the big-screen treatment following a fierce bidding war for the film rights.

The life story of the centenarian, who raised more than £32 million for the NHS by walking laps of his Bedfordshire garden, will be shot next year.

The Second World War veteran quipped: ‘I don’t know of any 100-year-old actors but I’m sure Michael Caine or Anthony Hopkins could do a wonderful job if they were prepared to age up!’

The ‘uplifting’ and ‘life-affirming’ biopic will focus on the former British Army captain’s ‘close relationship with his family and explore how his strength, wisdom and humour changed the way they viewed the world’. 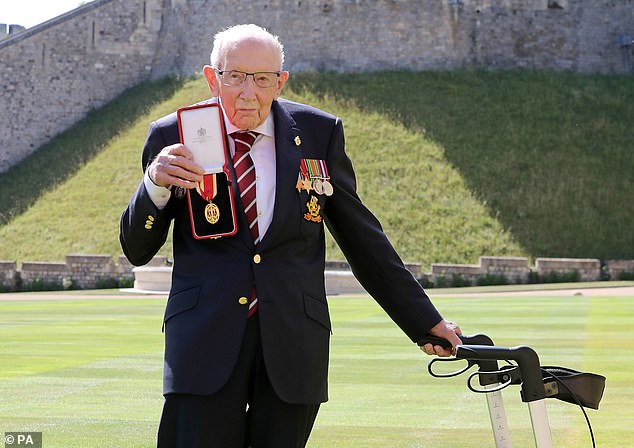 The life story of the centenarian, who raised more than £32 million for the NHS by walking laps of his Bedfordshire garden, will be shot next year. Pictured: Sir Tom after receiving his knighthood from the Queen in July this year

The movie will ‘draw on his military career and dramatise how personal grief and the horrors of war shaped his life and inspired him to keep walking’.

The fundraising legend made headlines by walking laps of his garden in the run-up to his 100th birthday, amid the pandemic, to raise funds from the NHS.

He also broke two Guinness World Records, scored a Number One single and was knighted by the Queen.

The film will be made by Fred Films and Powder Keg Pictures, whose credits together include Fisherman’s Friends, about the Cornish fishermen who signed a record deal, and Finding Your Feet, starring Imelda Staunton. 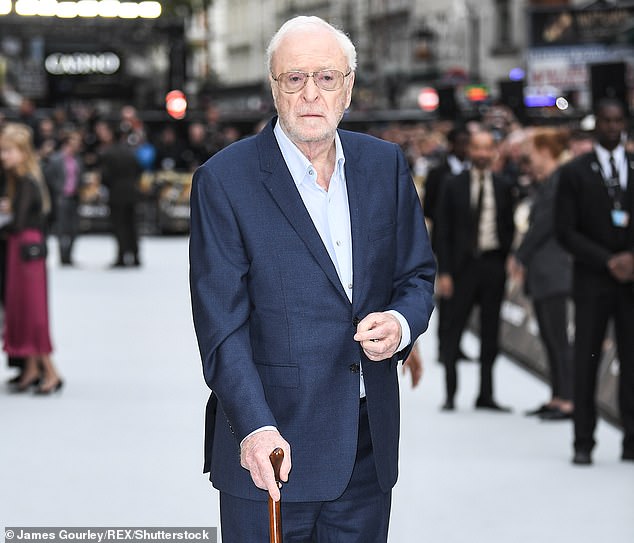 Writers/producers Nick Moorcroft and Meg Leonard said in a joint statement: ‘This is a story about the power of the human spirit and Captain Sir Tom personifies that.

‘We are honoured to be telling this unique and inspiring story and are excited about audiences getting to know the man behind the headlines.’

Producer James Spring said: ‘At a time of fear and uncertainty 161 countries around the world embraced the beacon of hope that Captain Sir Tom provided. We are privileged that Tom and his family have entrusted us to tell their story.’

The Second World War veteran’s daughter Hannah Ingram-Moore said: ‘We received so many offers but what it boiled down to was trust.

‘The family are big fans of the films James, Meg and Nick have written and produced and we hope that our story connects with audiences in the same way their previous films have done.’

From Yorkshire to India: Colonel Tom Moore’s career in the military

Captain Tom Moore was conscripted into the British Army in June 1940 when he was 20, alongside all men aged 20 to 35.

He began his military career in Otley, West Yorkshire, where he joined the 8th Battalion, the Duke of Wellington’s Regiment under Lieutenant Lord George Saville.

The Regiment was sent to train in Wadebridge, Cornwall where they were tasked with coastal defence amid a predicted German invasion.

A young Captain Moore was soon promoted to Corporal and sent to the officer cadet training unit in Droitwich Spa.

Here, he celebrated his 21st birthday after he passed as a Second Lieutenant.

In August 1941, he was sent to the DWR headquarters in Halifax where he joined the 9th Battalion at Winchcombe.

The infantry battalion then converted to an armoured regiment 146th Royal Armoured Corp, though the majority of the soldiers could not drive.

In October, the unit was posted to Bombay, now Mumbai, in India. The journey took six weeks by sea, with a four-day delay in Freetown, Sierra Leone and a four-day stop in Cape Town.

Captain Moore then took a train from Bombay to Poona, before arriving at Kirkee, a town now known as Khadki.

The 9th DWR formed the 50th Indian Tank Brigade under the command of Brigadier Schreiber.

Captain Moore was then asked by the Brigadier to start a motorcycling course for the Brigade due to his expertise for the sport.

The Brigade was then ordered to move to Calcutta – the road journey was in a monsoon and took three weeks.

His Battalion was stationed in the Lohardaga district near Ranchi.

They then took part in two exercises in the Arakan before moving further east and south to Rangoon.

Captain Moore was then sent on a course at the approved vehicle depot in Bovington, England.

He remained here as an instructor until it was closed.