Ms Berejiklian said she was monitoring the situation closely in Victoria and said she may consider excluding "Melbourne-ites for now but open it up to everybody else". 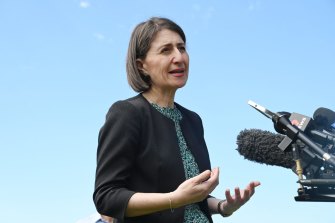 "These are all the options we're considering," she said. "But I do want to make sure that we don't have those border checkpoints for a day longer than we need to," she said.

Victoria's peak medical group said it was now safe for NSW to reopen to regional Victoria while tourism groups also welcomed Ms Berejiklian's comments, saying they provided some hope for the immediate future.

On Monday the rolling 14-day average fell to 1.6 cases in regional Victoria. The last time regional Victoria recorded any new infections was on September 17 when a single case was reported.

NSW recorded four new cases in the 24 hours to 8pm on Sunday, including three from returned overseas travellers now in hotel quarantine and one linked to other known cases. 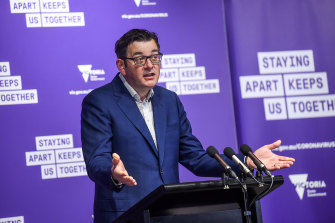 Victorian Premier Daniel Andrews said he had not discussed opening up borders to regional Victoria with the premiers of NSW or South Australia.

"No I've not had that conversation because I think I know what the answer will be," he said.

But Mr Andrews said he was pleased that neither the NSW nor South Australian governments had changed their bubble arrangements for their borders after restrictions were eased in regional Victoria last week.

"So they don't see it as a higher risk environment than what it was a week ago," he said.

The Colac Otway Shire currently has the greatest number of active cases across regional Victoria with 10, followed by Latrobe on four and then Greater Geelong, Macedon Ranges and Moorabool on two each.

While just 11 new cases were reported in Melbourne on Monday, the 14-day rolling average was still 34.4.

The Australian Medical Association's Victoria president Julian Rait said the low infection rate in regional Victoria meant it was safe to allow its residents to travel in NSW.

"There's almost zero cases now in the regions so that's perfectly sensible, if not overdue," he said. 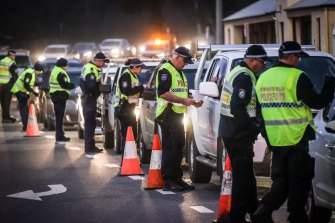 Police stop and question drivers at a checkpoint on the NSW-Victoria border in Albury.Credit:Getty Images

"We would love to see the borders opening to have an exchange of tourism," she said. "Both of our states will have to rely on interstate tourism."

But she said the most pressing issue was the fate of Murray River operators – some of whom were unable to reopen because they fall under NSW maritime law even though they are based in Victoria.

"They should be allowed to operate at least on the Victorian side."

Victorian Nationals leader Peter Walsh said all residents of regional Victoria should be allowed to travel to NSW.

"A lot of regional Victoria has no COVID. Why should they be excluded from travelling?" he said.

Tourism and Transport Forum chief executive Margy Osmond said Ms Berejiklian's comments would allow the industry to begin planning for the next step.

"It's highly appropriate now to be talking about how we plan for that to happen," she said.

Rural Councils Victoria deputy chair Jenny O'Connor, who is also the mayor of Indigo Shire in the state's north-east, said it was safe for Ms Berejiklian to open up to regional Victoria because numbers were so low.

"I would urge her to look at the numbers, at the fact we've been able to keep regional Victoria almost COVID-free, certainly in our area," she said.

"We are at a point where we need to start on the long road to recovery."