Olympic champion cyclist Sir Chris Hoy has slammed the ‘us versus them’ attitude between cyclists and drivers.

He said the war of the roads is ridiculous and added: ‘we are all someone’s son, daughter, mother, father, brother or sister.

‘People’s lives are at risk and it’s time to stop having a them versus us. In reality most cyclists drive and vice versa. We have to try and put ourselves in the shoes of another person.’ 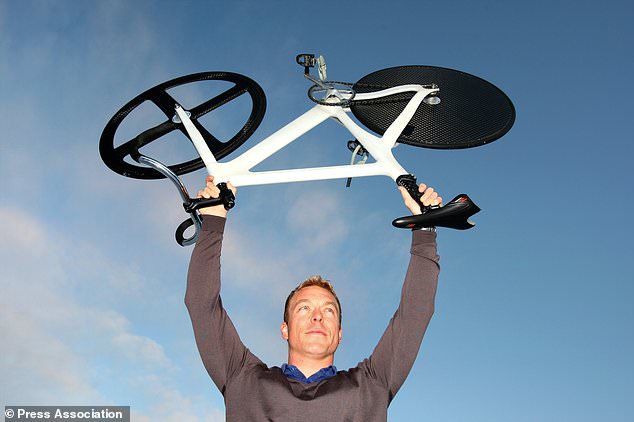 The six-gold winner, at Cheltenham Literature Festival to promote his book How to Ride a Bike, made the appeal for more ‘communication’ between the two sides.

He added that the war of the roads is costing lives

The recent increase in the popularity of cycling – particularly in urban areas – has changed the dynamic of driving.

In heavy traffic cyclists are often the fastest people on the roads, more agile at getting through gaps than motorbikes, and they are not always seen by drivers.

The 42-year-old said: ‘In reality, most cyclists drive and vice versa.’

‘If you are cycling and thinking ‘Well, they can sit behind me for half a mile on this single lane road’ … it’s not about saying you should get out of the way and let them through, it’s about, when they do come past, just give them the thumbs-up and you can see the road’s clear, give them a wave through, say thanks and that little bit of communication helps.

‘Equally, when you are a motorist, to understand what it feels like to have a wing mirror buzz past your ear is utterly terrifying.’

Sir Chris also revealed that it was the 1982-movie, ET, that inspired him to take up riding. The Edinburgh-born track cycling legend told crowds at the festival that he’d ‘never seen a bike ridden in that manner.’

‘I had never seen a BMX bike before,’ he said. ‘I was six years of age, saw this film and it was the way they used the bikes with jumps and going around corners, and I had never seen a bike ridden in that manner.’

And Sir Chris admitted he recently fell off trying to pull a wheelie on an e-bike.

‘One of my old teammates, Phil Hindes, was round my house last week with his new E-bike and, of course, being a big kid, I had to have a shot,’ he said.

‘I was showing off, front driveway, and pulled a wheelie.

‘I hit my coccyx and the back of my head and knocked the wind out of myself. I’m lying on the floor. All Phil could do was laugh at me and my wife is threatening to get the CCTV footage and put it online.

‘My head still hurts from that.’