In a situation described by an eminent barrister as an “omnishambles”, a Labor Party preselection fight has been halted by the Supreme Court hours after a state government minister held a rally on the steps of the Victorian Parliament calling for a woman to be installed as the candidate for a new federal seat.

The bitter contest for the electorate of Hawke, an outer-northern electorate in safe Labor territory, will be delayed after 10 unions were successful in their bid to stop the preselection ballot from going ahead on Friday, in which a factional opponent was likely to be installed. 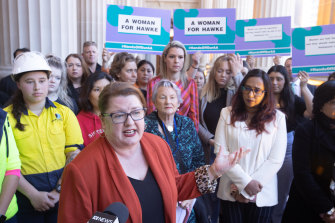 Corrections Minister Natalie Hutchins addresses a rally on the steps of Parliament House on Thursday.Credit:Simon Schluter

Unions, including the CFMEU and Australian Workers Union, told the court the fast-tracked process for the preselection was “invalid” and the federal national executive of the party – which took control of the Victorian branch amid branch stacking allegations related to powerbroker Adem Somyurek last year – acted outside its power and “threw out” normal Victorian party rules. The court decided these arguments had merit and required further consideration on Friday, which could delay the preselection vote scheduled for that afternoon.

Hours earlier, Victorian Corrections Minister Natalie Hutchins, who had previously flagged her intention to run for the seat, orchestrated a gathering of about 30 Labor women on the front steps of Victoria’s Parliament to call for a woman to be installed.

“We’ve got a number of women here from the Labor Party today who are outraged and angry that a man is being considered,” she said, sparking anger from her opponents who claimed her motivation was more about a factional war than gender representation.

The dispute boils down to a war within the party’s Right faction, which has been reorganising itself following Mr Somyurek’s fall. Earlier this week, sections of the Right signed a power-sharing arrangement with the Socialist Left, effectively cutting out elements of the Right associated with former opposition leader Bill Shorten and former allies of Adem Somyurek.

Former state secretary Sam Rae, who is signatory to the new pact and an ally of Richard Marles, is the favourite to win preselection for the seat of Hawke. When Labor leader Anthony Albanese on Monday ordered the national executive to hold a preselection by Friday, non-signatories viewed the move as an opportunistic “smash-and-grab” approach by the those in the “stability” deal.

Disaffected unions took the fight to the Supreme Court, accelerating a case that had been planned for months, and argued the federal takeover of the branch was improper from the outset. Acting for the unions, Ron Merkel, QC, said the federal branch’s decision-making powers did not allow it to override Victorian preselection processes. They also argue the timeframe for the preselection is “unprecedented” in its brevity.

“[The plenary power] does not allow [the federal branch] to throw out the Victorian rules,” Mr Merkel said.

Peter Willis, QC, acting for the Labor Party, called the case an “omnishambles”. 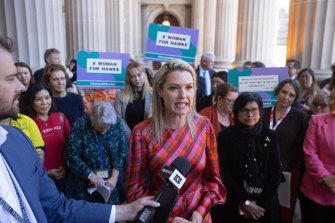 The legal principles in the case overlap with those in the case between Labor MP Marlene Kairouz and the Australian Labor Party. Ms Kairouz is facing disciplinary action by the party and also argues the federal intervention was invalid.

Justice Tim Ginnane, who is also presiding over the Kairouz matter, said it would be difficult to make judgements on legal principles in the union case months before he was due to make a judgement in the Kairouz case. To resolve this, the Justice resolved to call in the parties to the Kairouz case on Friday morning where he will consider the case in more depth than the two hours spent on Thursday.

Justice Tim Ginnane may grant a more substantive injunction on Friday and the union’s case could head to trial. There is still a chance the case could still be thrown out on Friday, clearing the way for preselection to take place at 4pm.

Importantly, he suggested the case was “justiciable” and “triable”, indicated his belief the case was within the court’s remit. It has been a long-running point of debate whether courts should adjudicate on internal political party matters. 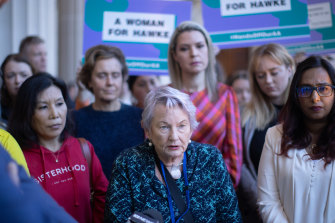 “They have raised arguments … that require further consideration,” he said.

Mr Merkel made the case that the fast-tracked preselection process was invalid.

“This process has been sprung out of the blue,” he said.

Four female candidates spoke at the rally at Parliament on Thursday, including Maribyrnong councillor of 13 years Sarah Carter and Kay Setches, the 76-year-old Phillip Island resident who was a Victorian MP from 1982 to 1992.

The Labor Party aims for 40 per cent of its members to be women – a target the party is currently achieving in Victoria. Women make up a greater proportion of the Left faction than the Right in the state.

A senior Left faction source said the push for a woman in the seat of Hawke was not based on an intent to see more women in Parliament, but was instead designed by his factional enemies to block Mr Rae’s path to Parliament.

“When [former Tasmanian senator] Lisa Singh was knocked off by a white male, they had no objections. They said ‘nothing to see here’,” the source, who spoke on the condition of anonymity to discuss internal affairs, said.

“Affirmative action is being used for factional purposes. It isn’t about achieving targets.”