One in five people arrested in Britain are foreign: Crime tourism spikes as police figures reveal an overseas suspect is seized every three minutes

Almost a fifth of all crime suspects arrested by the police are foreigners, shocking figures reveal.

Statistics obtained by The Mail on Sunday show a suspected criminal from overseas was detained on average every three minutes last year.

And the figures, secretly compiled by the police, graphically illustrate how Britain has become a lucrative target for sophisticated gangs of foreign criminals. 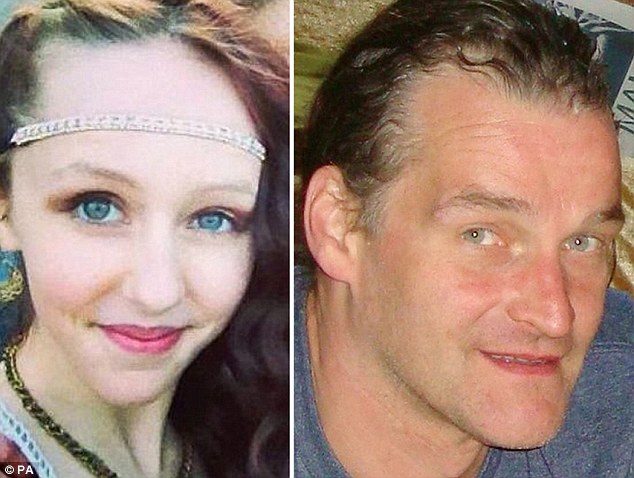 Lithuanian builder Arnis Zalkalns (right) was jailed for murdering his wife in his homeland, but was still able to move to London without anyone knowing his background, then murdered schoolgirl Alice Goss (left)

That represented a sharp increase from 16 per cent the previous year, according to internal figures collated by the ACRO Criminal Records Office from police forces around the country.

In London, as many as a third of all suspects are from overseas and foreign nationals now comprise 11 per cent of the prison population in England and Wales.

Last month, a Lithuanian gang was jailed for an audacious ‘awayday’ raid on a family jewellers in Cornwall. 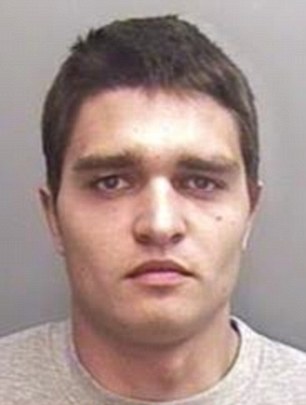 Haroldas Ivanovas, 20, was part of a gang of Lithuanians who masterminded an armed heist to steal £1m worth of jewellery

The team of crooks flew into the country specifically to steal millions of pounds of gems and watches from the Truro shop after the plot’s mastermind bought getaway cars and planned escape routes.

The Mail on Sunday has previously revealed how Romanian pickpockets followed popular bands on tours around the UK, stealing dozens of mobile phones from concertgoers at each gig.

And over the past few years, brutal Albanian gangs have cornered the market in smuggling cocaine into the UK, according to the National Crime Agency.

The risks of free movement for convicted criminals were starkly illustrated in the case of Lithuanian builder Arnis Zalkalns.

He had been jailed for murdering his wife in his homeland, but was still able to move to London without anyone knowing his background.

In 2014, he killed schoolgirl Alice Gross, whose body was found in a canal in West London, before hanging himself.

In response, police are developing the first national strategy for dealing with the ‘growing threat’ of FNOs – foreign national offenders.

Every force has undergone a ‘health check’ to assess how well they are dealing with problems such as establishing a suspect’s identity or criminal record.

Tactics to improve their response will include recording nationalities in every case, increasing use of international systems to share data and even the recruitment of ‘agents’ in immigrant communities to supply crucial intelligence. 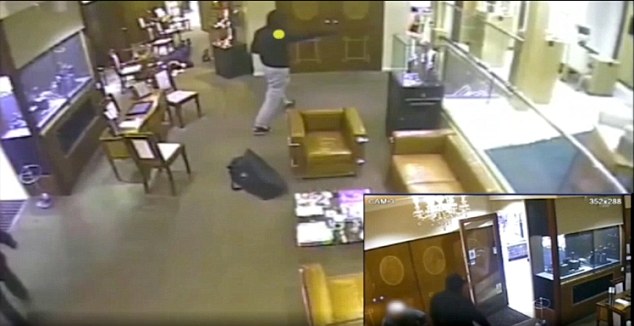 He and six other robbed the Michael Spiers jewellery store in Truro, Cornwall, shortly after entering the UK in January

Police chiefs are also asking the Treasury for an extra £1 million over the next two years to help them plan for the potential loss of crucial EU-wide law enforcement powers after Brexit.

If Britain leaves Europe without a deal next year, officers will immediately lose the ability to quickly check records with overseas forces.

In a paper presented to chief constables earlier this year, Deputy Assistant Commissioner Richard Martin – the national lead for tackling international crime – warned of the growing threat from crime tourism.

‘Police investigations are becoming increasingly complex due to mass migration, globalisation of business, existing and emerging internet-based communication mediums, together with the ease with which individuals can travel across the world,’ he said.

‘Police officers are now far more likely to encounter foreign nationals during the course of their duties.

‘To address this dynamic aspect of policing requires a change of mind-set.

‘Officers and staff need to recognise and understand the threat posed by international criminality and respond accordingly.’