The COVID-19 pandemic has taken so much from us this year but there is one thing, it seems, that it cannot destroy.

Householders across the country are switching on their Christmas lights once more. 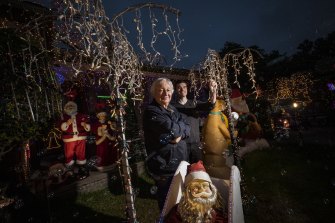 Lucio Mastro in the garden of his home in Mulgrave with Lachlan Kennedy.Credit:Chris Hopkins

Lucio Mastro, 75, says there are not as many in his area, but he decided to go ahead with his dazzling annual display at 11 Lebanon Crescent, Mulgrave, as he has done for the past 38 years.

It’s wacky. It’s over the top. It’s a little kitsch. But it works.

There is a cool polar bear singing jazz Christmas carols into a microphone, a giant kangaroo playing saxophone in a blow up band, with a penguin on drums.

A miniature train chuffs around in a loop. One machine spews snow over the yard and another pumps out bubbles. A smiling life-sized Santa and Mrs Claus wiggle their hips to music as they oversee it all from the porch. 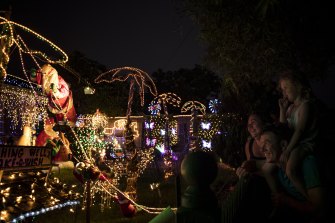 If you look closely, at the rear, at ground level, is a lovely plaster nativity tableau with Mary, Joseph, wise men, farm animals, and an angel.

In 2008, Mr Mastro’s house was one of the first free listings on the not-for-profit website christmaslightsearch.com.au, created by self confessed “Christmas lights tragic” Lachlan Kennedy and his cousin, Chris.

Mr Kennedy, 31, of Edithvale, said from the first 20 displays that year in Melbourne’s south-east that the cousins photographed themselves, the site has grown beyond their wildest expectations.

Residents now take their own photos, and post them, and this year there are a record 2100 listings, from as far as Darwin and Townsville. There are over 750 listings in Melbourne.

He speaks from experience: in October, he was made redundant from his job as a supply chain analyst for an automotive brand.

It was good to have the Christmas Light Search website to turn to, “to do something I enjoy, and take my mind off it”.

He said it was “energising” visiting and speaking to home owners about their lights and being thanked for his efforts, for which he isn’t paid.

“It’s exciting to be part of something that feels good to do. It’s only positive.“

For Lucio Mastro, of Mulgrave, it’s an artistic exercise. He made some of the display himself.

Mr Mastro wanted to recreate some of the sense of wonder and occasion of Christmas festivities he felt as a child in his town of Ottati in southern Italy.

He proceeded this year after checking with the council and police that it was safe.

He didn’t want to disappoint his neighbours. “They ask me, ‘are you going to do the lights this year’?”

Mr Mastro enjoys chatting to onlookers. Some were children who came here in the 1980s, and who now bring their own children.

“They’re amazed, they say, ‘there’s so much here to see, it’s incredible’. They love it. The kids love it.