A dog lover who launched himself 20ft down a storm drain in an attempt to save his pet had to be rescued by firefighters when he broke his leg.

Father-of-two Tony Stevens, 59, is ‘lucky to be alive’ after the dramatic double rescue on Saturday in King’s Lynn, Norfolk.

Mr Stevens watched in horror as his Tibetan terrier Bramble plunged into the drain which had its manhole cover missing.

He peered in to see the three-year-old struggling in the murky water below and dropped himself in to help her before his wife Karen could stop him.

Mr Stevens, a scaffolding sales manager, landed on a concrete ledge 20ft down, breaking his shin and ankle, but managed to grab his pet from the effluent.

As there was no ladder in the shaft and having injured himself, he had no way of getting out of the drain on the Lynnsport playing field. 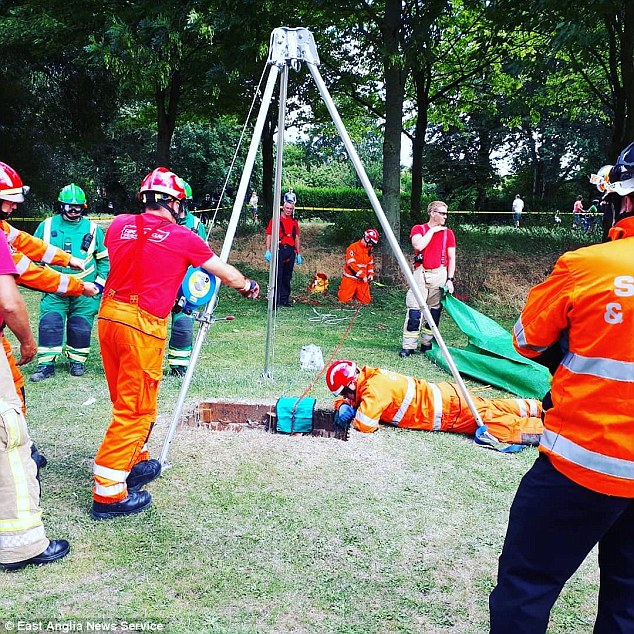 Firefighters descended on the playing field in Norfolk before pulling Bramble the dog and his owner Tony Stevens to safety. Mr Stevens is now recovering in hospital

Bramble was pulled out in a harness before Mr Stevens was strapped to a stretcher board and lifted free with the aid of a tripod and ropes more than two and a half hours after becoming trapped.

He is recovering in The Queen Elizabeth Hospital, King’s Lynn, before more surgery later this week to repair his broken bones.

Bramble was taken to the vets and was not found to have any obvious injury.

Mrs Stevens who lives with her husband in King’s Lynn, described him as ‘a hero’ for saving their pet, and praised emergency services for rescuing both of them.

She said: ‘The paramedics were saying that they are always telling people that they should not put their lives in danger to rescue their pets, but at the same time they all said they would have done the same thing.

‘When you hear your dog screaming its head off, you do whatever you have got to do to save it and you don’t think of the consequences. Tony loves our dogs and would do anything for them.’

Mrs Stevens said the drama happened when she was out for a walk with her husband and their two dogs Bramble and Poppy, an Old English Sheepdog. 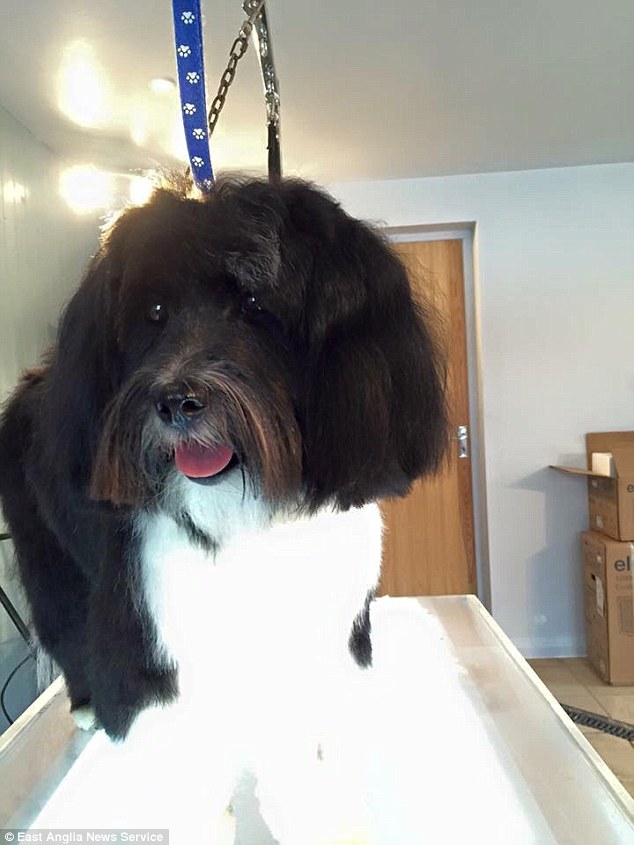 Bramble, the Tibetan Terrier, who was rescued from a drain in Norfolk. The dog fell down the open manhole

She believes the drain cover on the playing field had become dislodged by a surge of water during torrential rain last Friday and had fallen into the shaft.

Mrs Stevens said: ‘We suddenly came across the open manhole and I stopped to do my good citizen bit by phoning the council to tell them about it to get them to make it safe.

‘But all of a sudden, Bramble ran past me and went into the hole. I immediately dialled 999 to ask the fire brigade to bring a ladder and get her out.

‘When I put the phone down, I turned round and realised Tony was reaching down the hole. He then dropped himself in and landed on the concrete below.

‘He reached into the water and pulled Bramble out, but then he shouted back up that he thought he had broken his ankle.

‘He sat there holding Bramble – but there was no way to get them out. In the end the emergency services came here with 14 vehicles. It was quite a complicated operation to get him out.

‘I am so grateful for everyone involved. I dread to think what would have happened if Tony had been on his own. He would have been stuck down there with nobody to hear him.

‘The drain cover must have come off in the heavy rain about 24 hours earlier, so it could easily have been a child falling down the hole. I am surprised that nobody else had fallen in.

‘When I spoke to Anglian Water, they said that they only allowed people into a drain like that in proper bio-hazard suits and with breathing apparatus. 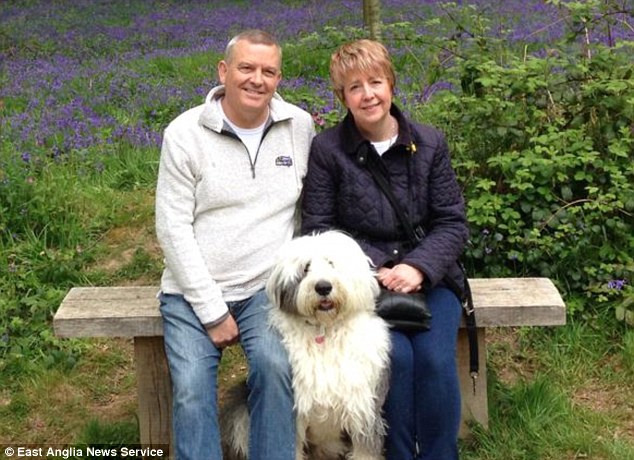 ‘I can only assume that any fumes had escaped due to the manhole cover being missing for so long.

‘When Bramble came up in a rucksack, she was covered in sewage and when I was trying to clean her down she was screaming in pain.’

Mrs Stevens said she left her daughter Toni, 35, who had arrived at the scene, to stay until her husband was rescued while she took Bramble to the vet.

She added: ‘The vet could not find any broken bones. She is better than she was, but she is still a bit slow so I am taking her back to the vet in case she has internal injuries.

‘Tony has had an initial operation and is now having a load of metalwork and screws put in to lengthen his shin before more surgery.’

A Norfolk Fire and Rescue Service spokeswoman warned people not to try and rescue pets in dangerous circumstances.

She said: ‘Please be reminded if you see an animal in distress, either in water, below ground or stuck at height, don’t try and rescue them yourself, please call the RSPCA or 999 for assistance.’

Norfolk firefighter Rob Combs, who took part in the rescue operation, said: ‘The cover of the storm drain had come off, most likely through the flooding the night before.

‘The dog fell down it and was paddling, then the dog stopped paddling. He [Mr Stevens] lowered himself and dropped the rest of the way.’

He added that Mr Stevens’ ankle injury meant he had to be lifted carefully up through the narrow drain shaft.

Mr Combs said: ‘It was hot, smelly and just took time to set up an appropriate rope line system. We wanted to take him out as straight as possible. 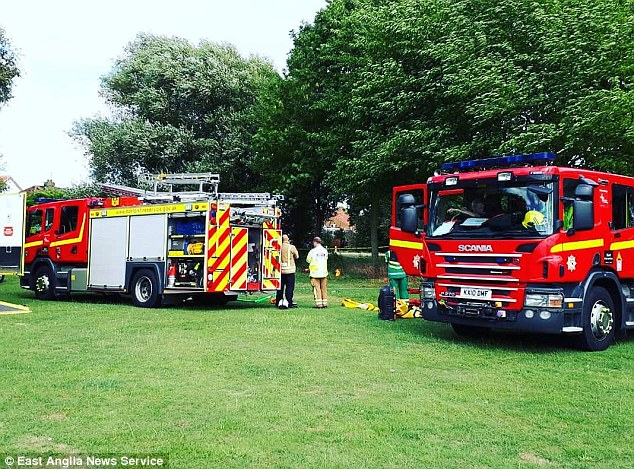 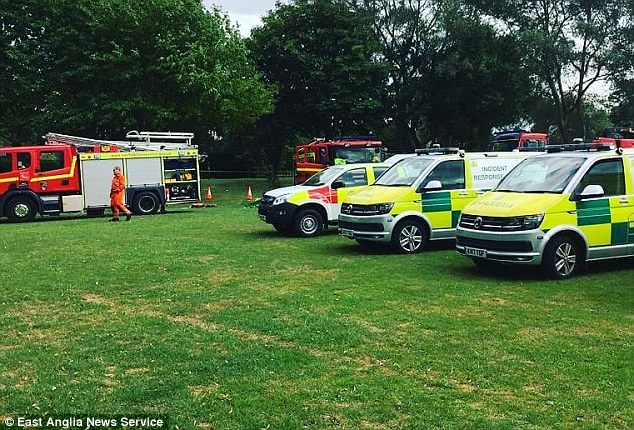 ‘The dog had no apparent injuries. The chap was more than happy, laughing and joking with us.’

Mrs Stevens told friends on Facebook: ‘If your dog fell 25 feet down a storm drain with a missing cover – what would you do? Leave her to drown or jump in after her?

‘Well Tony was hero of the day yesterday and managed to save Bramble’s life, sadly shattering his shin bone and ankle in the process.

‘Emergency op tomorrow for external metalwork to stretch the bone out and then an op in Norwich next week to repair the broken shin bone.

‘Bramble is very subdued but doing well so far. Vets couldn’t find any internal bleeding. Will keep you posted. Grateful thanks to the 14 emergency vehicles and their teams who helped get them both out.’