The Conservative Party’s Brexit civil war exploded today as Philip Hammond claimed the Tories are being turned into an ‘extreme right-wing faction’ by ‘usurpers’ while allies of Boris Johnson called the former chancellor ‘stupid’.

Mr Hammond was one of 21 Tory MPs to be stripped of the whip last week after he backed a Remainer bid to block No Deal.

He is now seeking legal advice ahead of a potential challenge in the courts to overturn the Prime Minister’s decision to expel him.

The hardline stance taken against the rebels by Number 10 has sparked widespread outcry on the Tory backbenches with Amber Rudd citing their treatment as one of her main reasons for quitting the government and surrendering the whip last night.

Mr Johnson has said he wants to ‘build bridges’ with his former colleagues but the chances of that happening took a hit today as the rebels and members of the Johnson administration squared off in public. 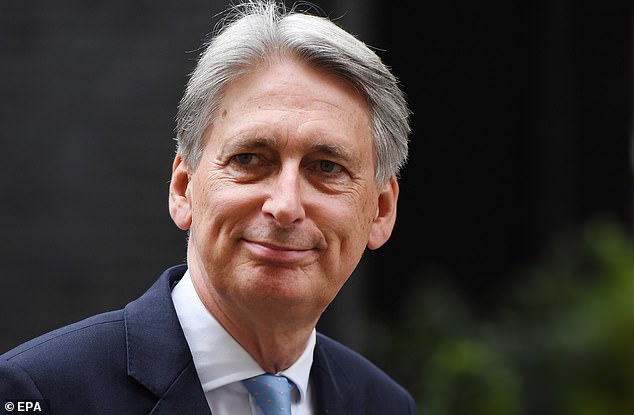 Ms Rudd’s resignation prompted numerous senior Tories to bemoan the decision and to praise her for her work in government.

Matt Hancock, the Health Secretary, said: ‘The Conservative party has always been a broad church shaped by those within it.

‘Gutted to see Amber leave – but hope other One Nation Tories will stay and fight for the values we share.’

But Mr Hammond responded to Mr Hancock: ‘Sorry Matt, I’m afraid the Conservative Party has been taken over by unelected advisors, entryists and usurpers who are trying to turn it from a broad church into an extreme right-wing faction.

‘Sadly, it is not the party I joined.’

The former chancellor’s comments prompted Conor Burns, one of Mr Johnson’s closest allies and an International Trade Minister, to hit back and accuse him of talking ‘absolute c**p’.

‘The party hasn’t been taken oven – it elected a new leader by a huge margin,’ he tweeted.

‘And it has rejected the years of miserable defeatism led by those who simply cannot accept the result of the referendum.

‘To accuse this PM of being an extreme right winger is stupid.’

A number of the 21 Tory rebels who were stripped of the whip have said they intend to stand down as MPs at the next election.

But Mr Hammond has vowed to fight the decision to take away his Tory credentials and he has insisted he will contest the next election as a Conservative candidate.

Last night it emerged he is seeking legal advice on the matter.

Writing for the Get Surrey website, he said: ‘I am currently taking legal advice with regard to the lawfulness of the actions taken against me and my colleagues last week and the processes that have been followed. 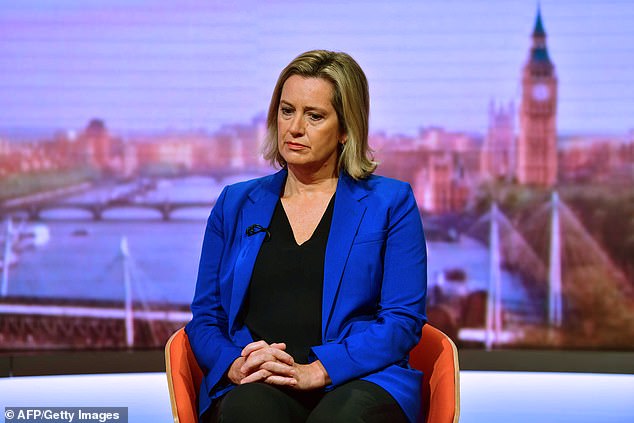 Amber Rudd, pictured on the BBC’s Andrew Marr Show this morning, quit the government last night and today claimed getting rid of moderate MPs would hurt the Conservative Party at an election

‘In the meantime, I have written to the Chief Whip asking him to provide a formal statement of the reasons for the removal of the whip, the process by which that decision was made and the procedure by which it may be challenged. ‘

‘I will decide in due course how I intend to proceed and my colleagues will reach their own decisions.’

Ms Rudd today warned that the decision to strip moderate MPs of the Tory whip could cost the Conservative Party a majority at the next election.

The Hastings and Rye MP said she had taken the step of surrendering the whip to ‘make the point that the Conservative Party should be a moderate party which accepts people with different views on the EU’.

She added: ‘If we become a party which has no place for the type of moderate that I am, then we will not win.’