Shocking images show the amount of cash required to buy some basic supplies as Venezuela’s hyperinflation spirals out of control.

Venezuela has been thrown into chaos by a socialist government under Nicolas Maduro which has introduced a controversial tranche of fiscal policies.

Unbridled hyperinflation has seen the bolivar devalued to a point where workers need wheelbarrows to carry enough cash for a weekly shop.

Maduro unveiled a major economic reform plan this weekend aimed at halting the hyperinflation crisis and will start issuing new banknotes after slashing five zeroes off the crippled bolivar.

The measures – revealed in a speech to the nation late Friday – include a massive minimum wage hike, the fifth so far this year. 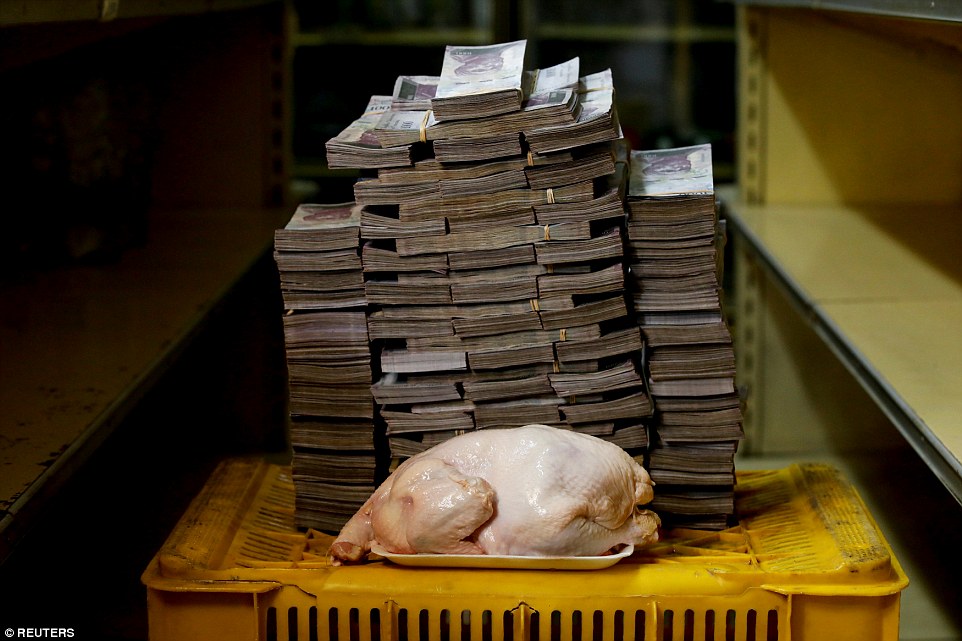 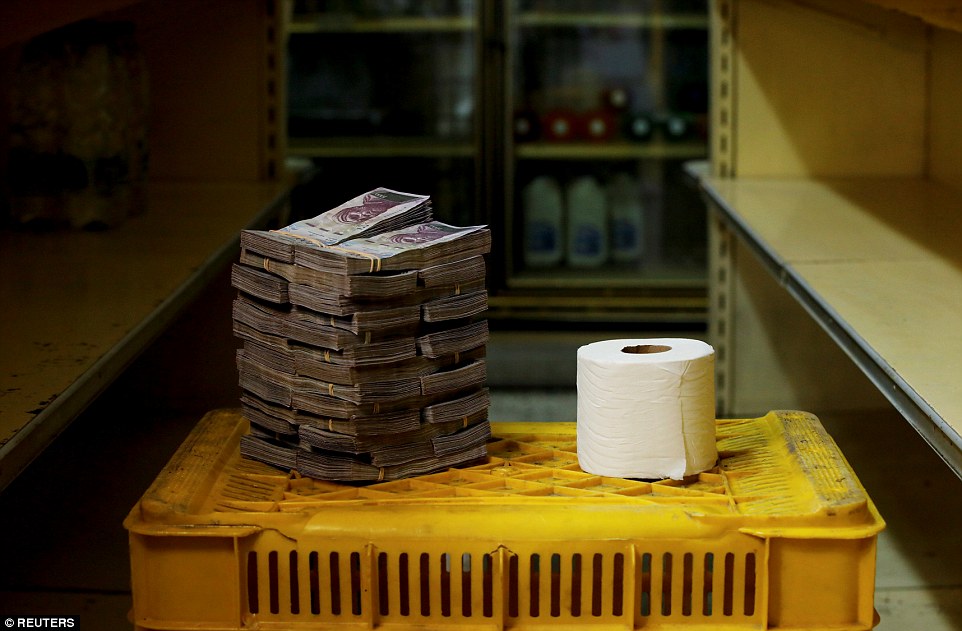 A normal roll of toilet paper pictured next to a huge stack of 2,600,000 bolivars at a small neighborhood store in the Venezuelan capital 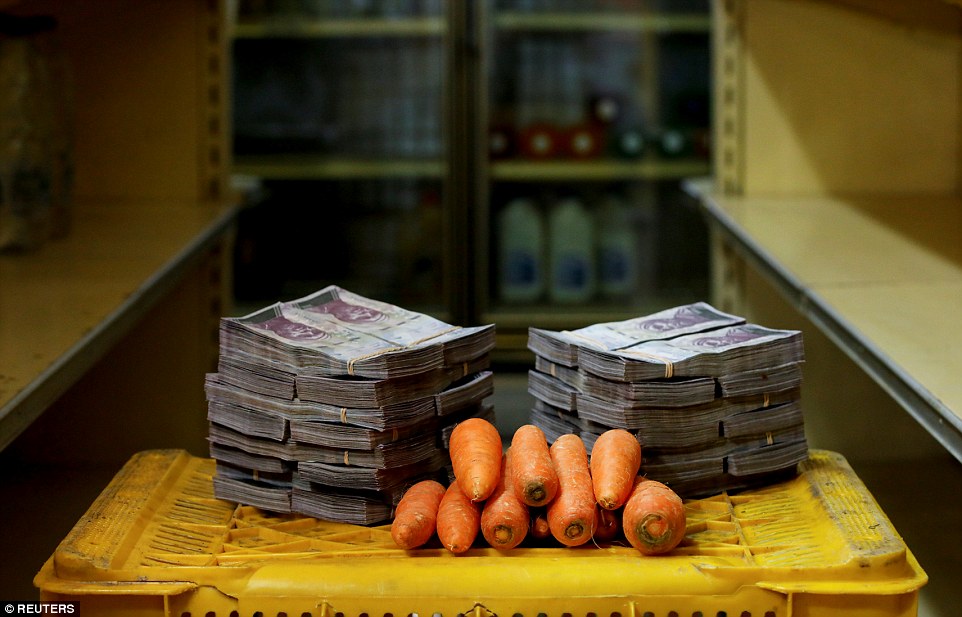 Enormous piles of cash are required to buy even the most basic food supplies after a period of runaway hyperinflation. Pictured is a kilo of carrots costing 3,000,000 bolivars ($0.46)

Jittery Venezuelans on Friday rushed to shops and formed long lines in preparation for the monetary overhaul.

Shoppers and economists are now concerned Maduro’s minimum wage increase could close thousands of stores across the country as companies will no longer be able to pay their workers.

Although the wage increase will make it possible for Venezuelans to buy basic supplies, there may not be anywhere open to sell them.

Economists warned that some companies would go under, unable to shoulder the massive increase in monthly minimum wage from 3 million bolivars to 180 million bolivars, or roughly $0.5 to $30. That will likely increase unemployment and further fuel mass emigration that has overwhelmed neighboring South American countries.

As it stands, the monthly minimum wage – devastated by inflation and the aggressive devaluation of the bolivar – is still not enough to buy a kilo of meat. 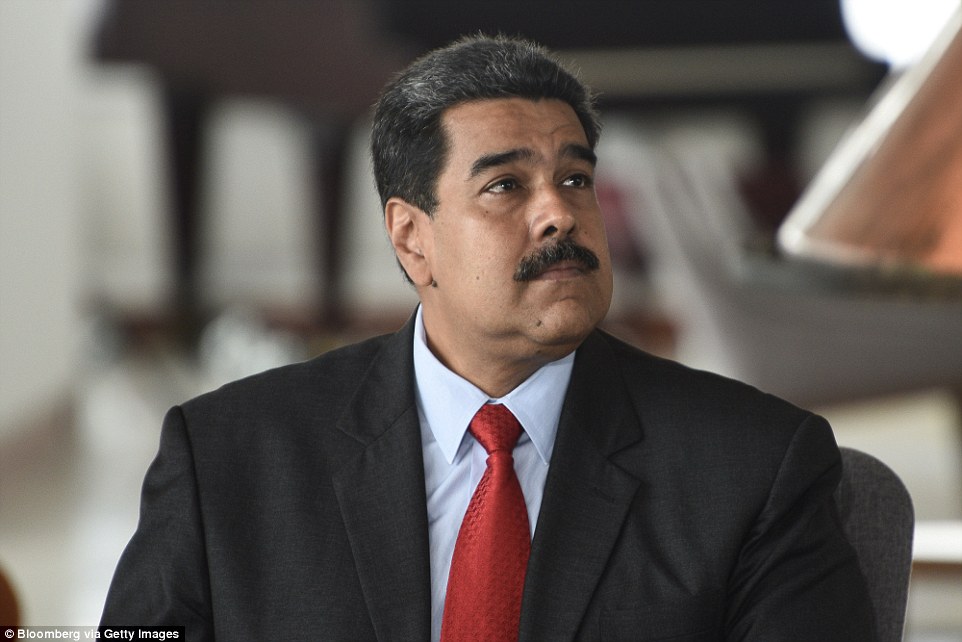 Nicolas Maduro, Venezuela’s socialist president, has presided over the country during one of the darkest periods in its history 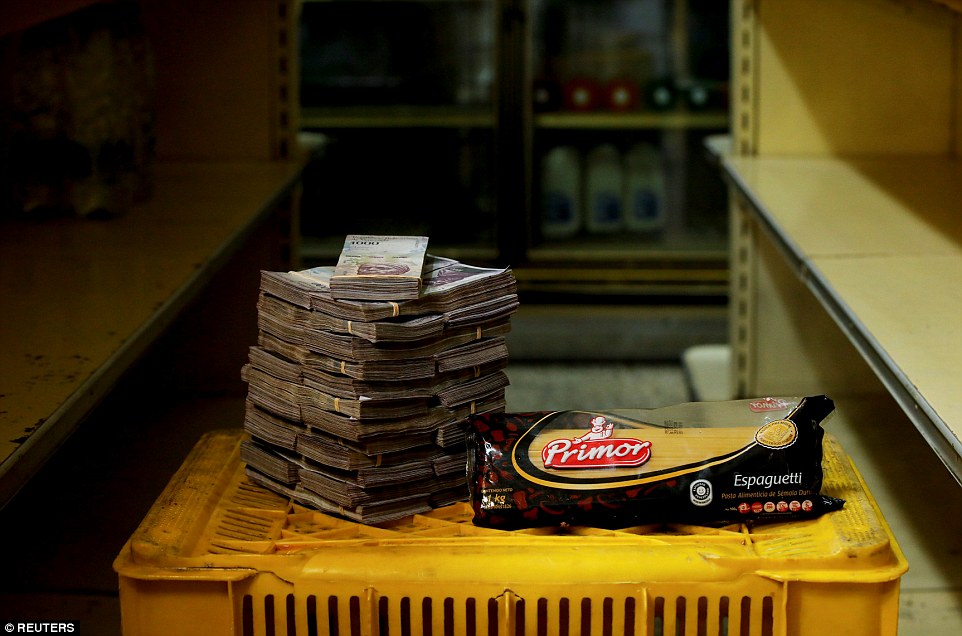 Thousands of people have left Venezuela due to spiraling inflation rates and political unrest among the majority of the population. Pictured is a package of 1kg of pasta next to 2,500,000 bolivars ($0.38) 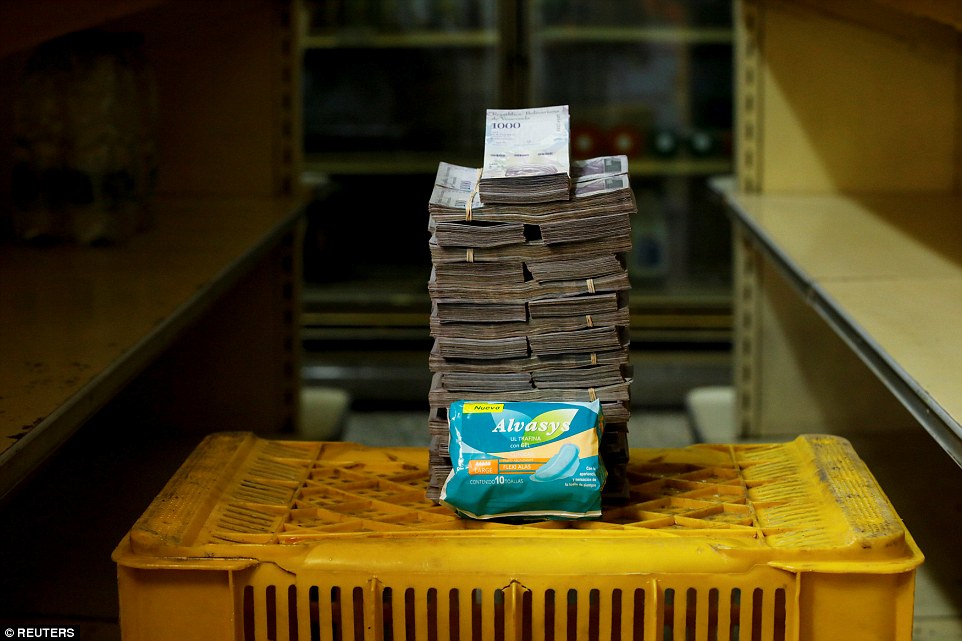 A packet of sanitary pads costs an enormous 3,500,000 bolivars in a local store in Venezuela as inflation continues to rise 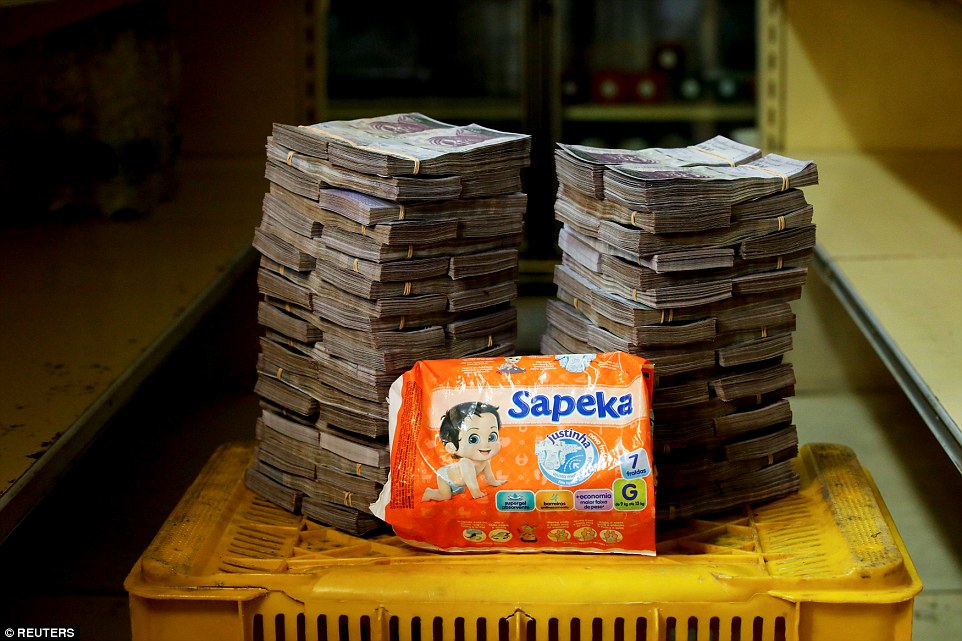 Venezuela’s government will implement a new string of measures on Monday aimed at making goods more affordable. Pictured is a pack of diapers costing 8,000,000 bolivars (£1.22)

To soften the blow, Maduro vowed that the government would cover three months of the wage increase for small and medium-sized companies.

But he did not provide details and it remains unclear how his cash-starved government would afford such a hefty payout or whether the chaotic administration has the logistical capacity to pay wages on time.

Inflation hit 82,700 percent in July as the country’s socialist economic model continues to unravel, meaning purchases of basic items such as a bar of soap or a kilo of tomatoes require piles of cash that is often difficult to obtain.

The International Monetary Fund predicts inflation will hit a staggering one million percent this year in Venezuela – now in a fourth year of recession, hamstrung by shortages of basic goods, and crippled by paralyzed public services.

Maduro blames the country’s financial woes on opposition ‘plots’ and American sanctions – but admits that the government will ‘learn as we go along’ when it comes to the currency redenomination. 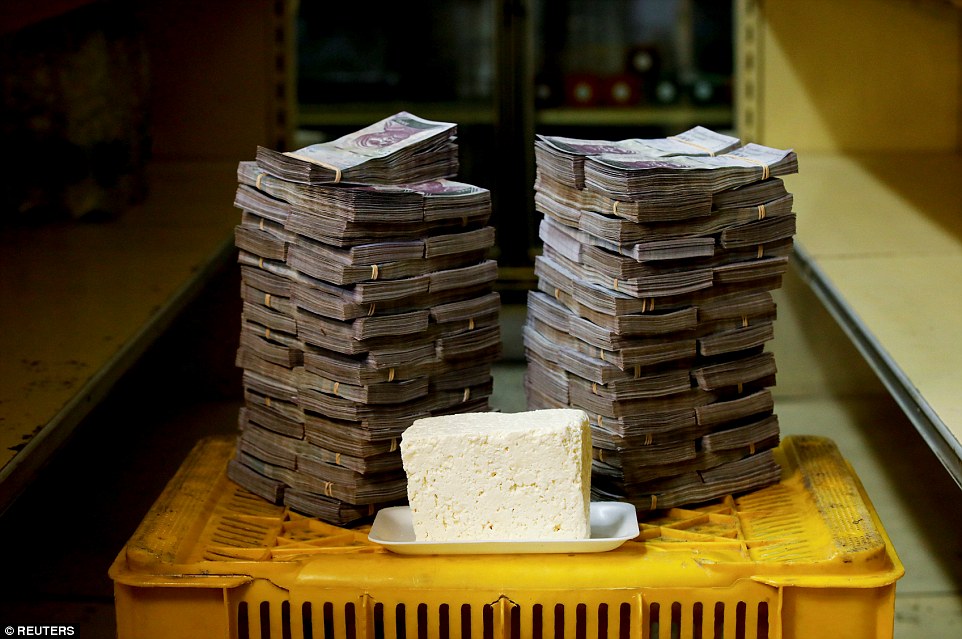 A kilogram of cheese costs 7,500,000 bolivars ($1.14) with the real prices of many goods expected to rise under new measures 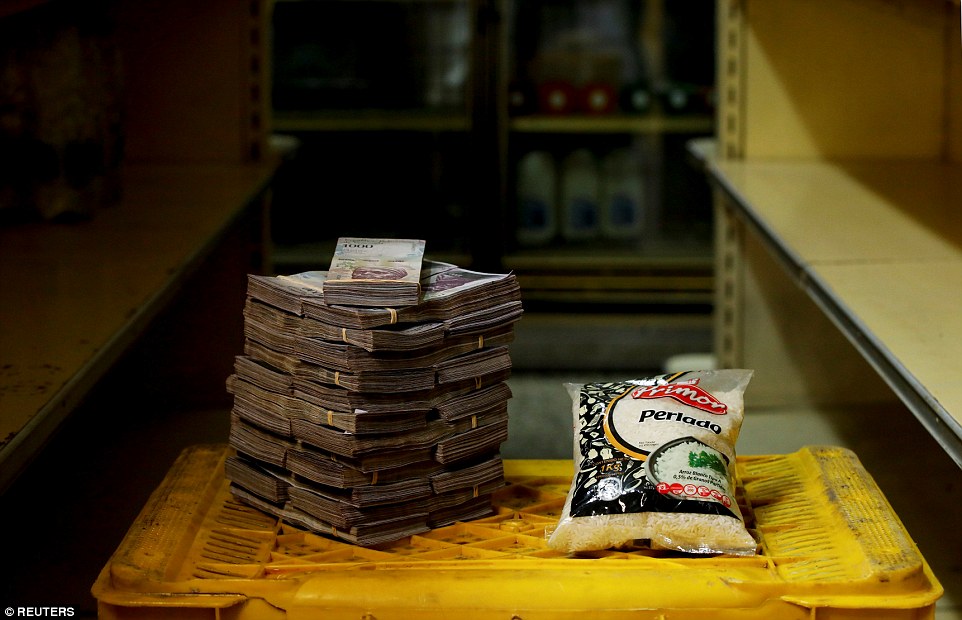 Even the most basic foodstuffs like rice require enormous amounts of cash to buy like this rice which costs 2,500,000 bolivars ($0.38) 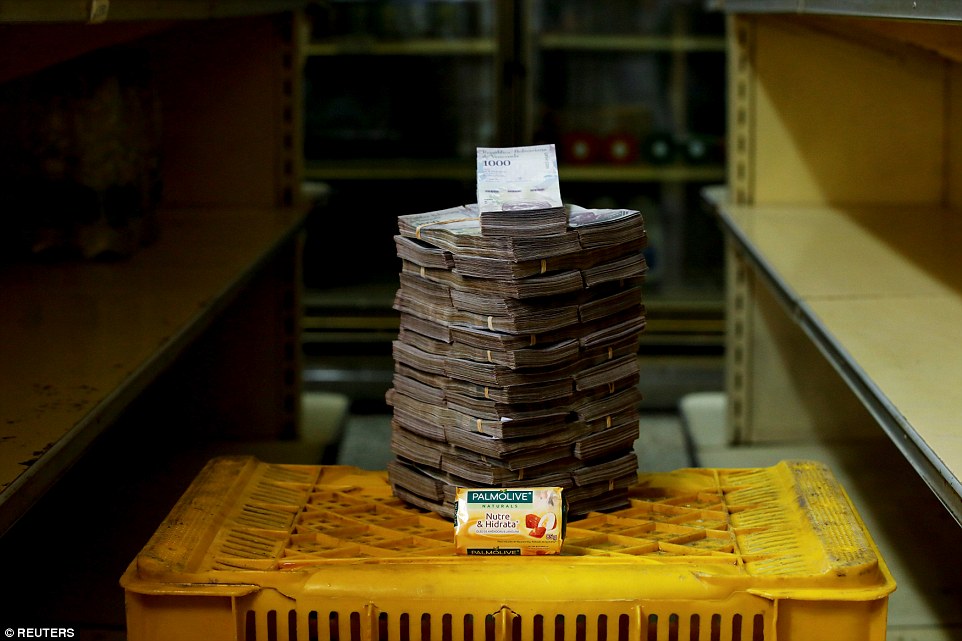 Sanitary products in particular have become expensive in the harsh economic climate in Venezuela with a bar of soap costing 3,500,000 bolivars ($0.53) 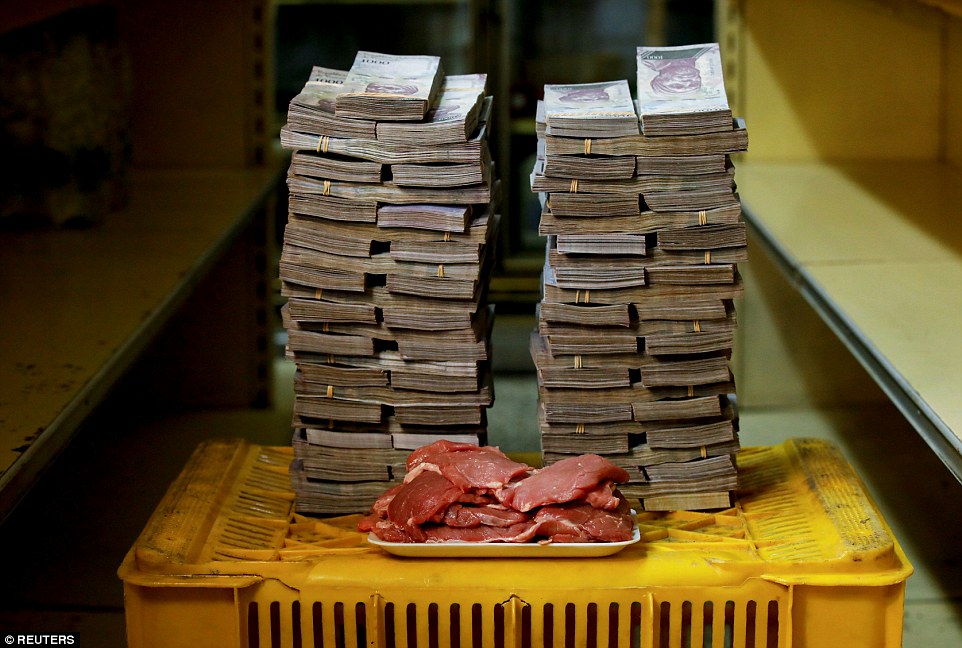 The monthly wage of most Venezuelan workers is said to be still not enough to buy a single kilogram of meat (pictured) which costs 9,500,000 bolivars ($1.45) 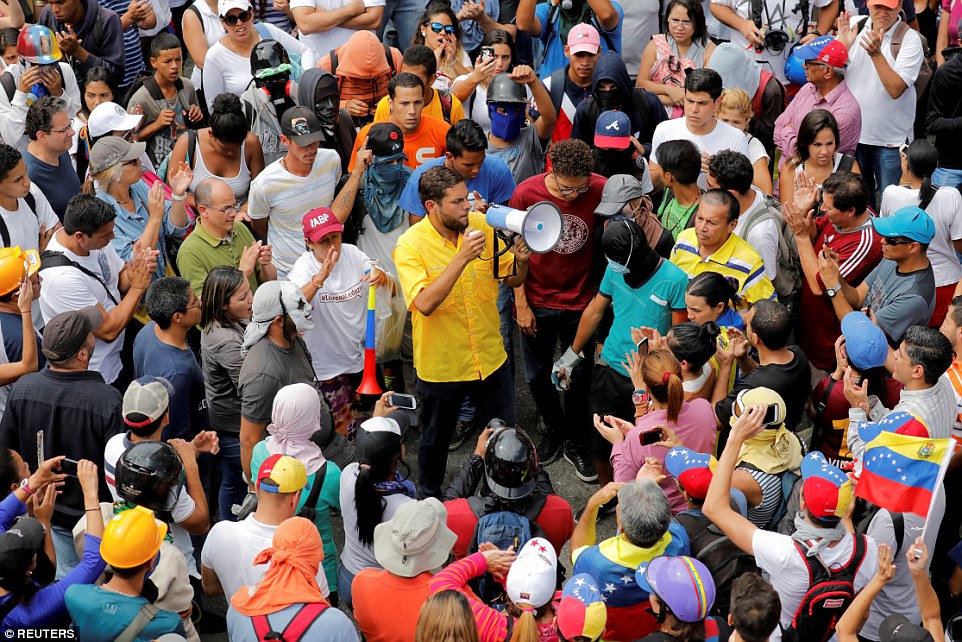 Venezuela’s president said the country’s central bank would publish an exchange rate for the new virtual currency. Pictured: an anti-Maduro rally in Caracas